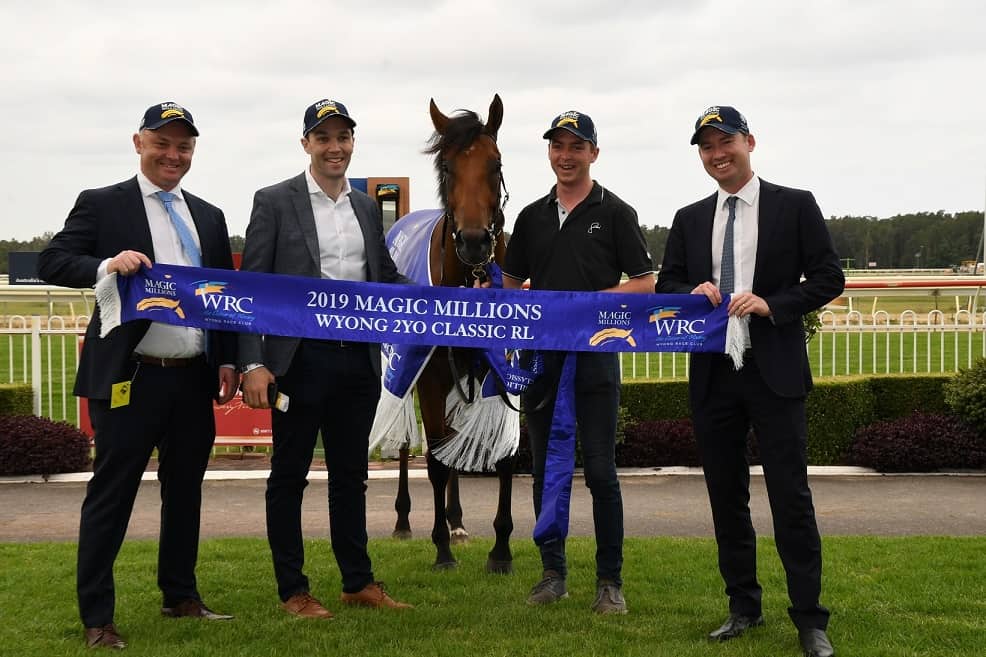 It was back to back Wyong Magic Million 2YO Classic wins for the Waterhouse/Bott stable after Farnan handled a step up on class to take out the $200,000 feature race.

Gai Waterhouse has now claimed the race five times, the second with co-trainer Adrian Bott, after the pair took out the 2018 version with Unite And Conquer.

In a good training performance, Farnan was taken from a 2YO Handicap win at Canberra on November 17 to the Wyong race.

The $550,000 yearling purchase was sired by Not A Single Doubt, who won the first Wyong Magic Millions 2YO in 2003 and sired a subsequent winner, Karuta Queen in 2010.

Farnan was sent out $2.90 second favourite to the Mark Newnham trained Every Rose.

Jockey Tim Clark sat just off the leader after Farnan pinged the gates, hitting the front on straightening to win by a length.

“He’s a quality individual and it was a big step up for him from a Canberra maiden to here today. We took a bit of time between his runs, but his great, professional attitude got him here today.

“He broke brilliantly today and settled well for Tim (Clark) throughout the run, moved up when he need to and showed a good turn of foot. All the good attributes that those good two-year-olds have, that’s what he has got, and it’s taken him a long way.

“We kept him nice and fresh between the two runs getting him today and it’s great to see him take the next step and exciting for him.

“He’s a lovely physical type and a nice strong individual.

“I think he is definitely open to more improvement off the back of that and he’s on the right path.”

Bott said he would see how the horse pulled up before deciding if they would run him again before the Gold Coast Classic.

Clark said it was his first ride on the colt and he was impressed by the way he won.

“He was really impressive. His attitude is great, and he seems unflappable which is a good attribute to have.

“He began well and got outside the leader no worries and we controlled the speed from there. He gave a nice kick and I felt the filly coming at him but he responded for me and was strong to the line.

“He’s done a really good job there, second start in a race and is progressing nicely.”

Mark Newnham didn’t go home empty handed with the Diamond Thunder taking out the $100,000 MAGIC MILLIONS WYONG 3YO & 4YO STAKES and Exceed The Stars winning the 1000m Class 1.

Both were ridden by Josh Parr giving his locally based fan squad plenty to cheer about.

Parr had to change tactics after the Dawn Approach gelding dwelt at the start, opting to settle the three-year-old toward the rear before making his run on the turn.

Hugh Bowman appeared to have snatched victory, after switching Hightail to the fence in the final stages, but Diamond Thunder showed his class to grab a narrow half neck win.

It was fifth win from seven starts for the $135,000 yearling, the victory franking his favouritism for the $2m Magic Millions 3YO Guineas in January.

“What he did today he showed he will definitely be better once he gets to 1400m,” Newnham said.

“He came and had a look around Wyong on Saturday morning, I floated him up here for a gallop, and I think it’s been beneficial in him getting the result today.

“He was a bit awkward back in the field but gathered them up really well.

“He started a bit slow, which is unusual for him but he’s a really versatile horse anyway. He’s led in one, he sits back, he’s got a good will to win.

“Josh did the right thing and let him gather himself and balance and got the job done.

“He will now go to the Vo Rogue at Eagle Farm on December 28 and then on to the Gold Coast for the three-year-old Magic Millions.”

Parr joked he had to revert to ‘plan c’ after the slow start.

“I’m not sure what happened today. For the first time in his career he just dwelt at the start and was a bit hesitant over the first fifty metres of the race,” he said.

“There is nothing like versatility and that comes from both horse and jockey and I had to deploy plan c.

“He’s got an unbelievable will to win and is notching up a really good record. The stable and myself have had a lot of time for him for a very long time and it’s been interesting and intriguing to see the process of getting him here today.”

The Snowden stable filled the minor placings with Hightail ($6.50) runner-up, ahead of Leviathan ($3.60).

It was another good ride by Parr that secured victory for Exceed The Stars ($3.70) who brought up his second win from seven starts in the WYONG COAL CLASS 1.

“It was a very good win,” Newnham said. “Once he got into the right spot you could see he was always going to be hard to beat because the two leaders had gone at it pretty tough together.

“He had the sitting shot at them but still had to put them away and it was good to see him do that.

“He trialled behind another horse of mine that won at Rosehill yesterday, so the trial form was good. He’s been a horse that has been a bit inconsistent but today, as soon as he jumped well and travelled strongly you know he would be in the finish.

“It was really good.”

In other results on the day, Irish jockey Oisin Orr brought up his first Australian winner on the Chris Waller trained Kimpembe ($3.70) in the GREAT NORTHERN BREWING CO METRO & PROV MAIDEN over 1600m.

Orr, a dual Irish apprenticeship winner, was having his eighth ride since moving to Australia in late November.

“It’s great to get a winner, especially for Mr Waller, and hopefully there will be many more to come,” he said.

Orr, settled the Savabeel gelding toward the rear of the small field, circling on the turn before hitting the front in the final stages to score a length and a quarter win.

It was the fourth career start for Kimpembe, a $240,000 Magic Millions yearling.

“He had him in an ideal position, that suited the horse well and he was able to go on with it,” Ritchie said.

Ondo Pasa ($9) upset some of her more favoured rivals to take out the MERCURE KOOINDAH WATERS GOLF & SPA RESORT BENCHMARK 64 over 1600m.

It was the second Wyong win for the Love Conquers All six-year-old in just over a month.

Mikayla Weir took a sit on the mare, settling her toward the rear. She took off just before the turn and was able to run down the Waller trained Fairy Me Home ($8.50) to win by a length.

“I’m not feeling 83 today,” Thomas laughed after the win.

“She’s a handy little mare and this little girl rides her so well. The horse loves Wyong and appreciated the extra distance today.”

Weir said Ondo Pasa, who she partnered in her last Wyong win, had been “crying out” for the extra distance.

“We thought she’d appreciate the extra ground and she certainly did,” Weir said.

“I was able to settle her toward the rear and she let down really well when we got into the clear running.

“It was a good win and Stan is doing a great job.”

The Peter and Paul Snowden trained Miss Sure Shot justified her race favouritism with a strong win in the MAINSTREAM TAXATION & ACCOUNTANCY SERVICES MAIDEN over 1350m.

The $150,000 Shooting To Win yearling, reaped the benefits of a well rated, front running ride by Kerrin McEvoy to come away with her debut win at start four.

Peter Snowden said he believed the filly would improve further when she could take a sit.

“Kerrin rode her perfectly for the race today but I don’t think that’s the way to ride her going forward,” he said.

“But you’ve got to get the job done and that was the only way to do it today and he’s rated her perfectly.

“I’ve always liked her and I’m hoping she can go on with it.

“I think you’ll see a better filly if she can get back and you’ll see her turn of foot.”

A slow tempo and step up in distance were the perfect combination for the Clare Cunningham trained Lady Highly to take out the 2100m MAGIC MILLIONS GOLD COAST IN JANUARY CLASS 1 & MAIDEN.

The High Chapparal mare looked set for a 2100m race when she finished fourth over 1900m at Canterbury on November 20.

Cunningham said it was a great ride by Jason Collett to secure victory for Lady Highly ($3.20) at her fourth race start.

“So it’s been about a bit of education for her and this was her fourth run this preparation and it was the perfect ride by Jason for her to get the job done.”

Cunningham said she would see how the horse pulled up before deciding on her next run.

“We will probably just work her through the grades. She still has a little bit of learning to go but we’ve found her mark over a trip.

“Now she’s doing everything right hopefully we will her along through the grades.”

Collett settled Lady Highly mid-field throughout, and when the split came in the straight, she showed a good turn of foot in the final stages to win by two lengths.

The $2.60 race favourite Brilliant Mind, trained by Gary Moore was second, with Savvy Valentino ($3.80) from the Bjorn Baker stable third.