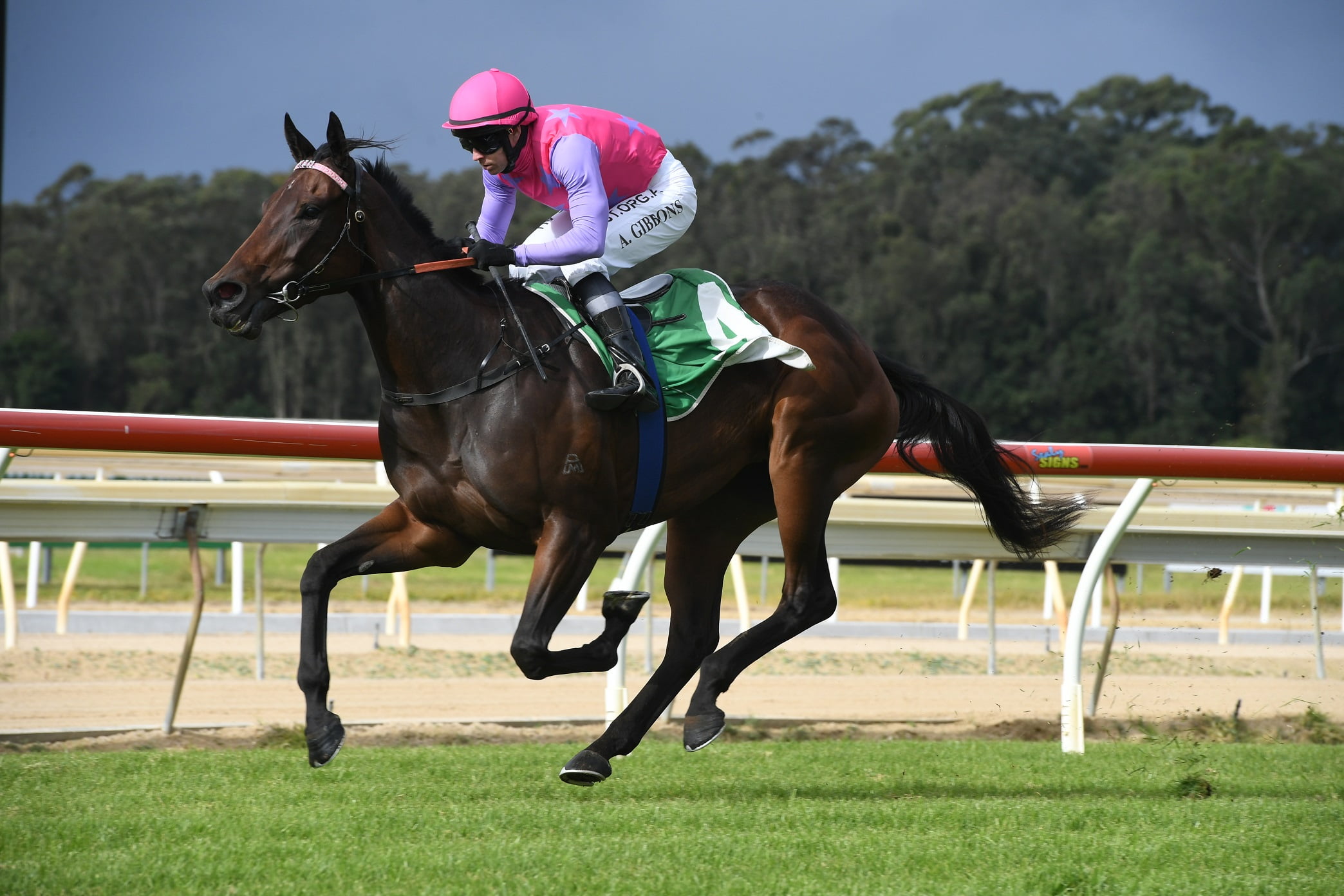 Kim Waugh is excited about the prospects of Great News after the filly’s breakthrough maiden win at her third start.

The Uncle Mo three-year-old put more than a length on her opposition on the line to take out the TAB.COM.AU MAIDEN over 1100m, courtesy of a patient ride by Andrew Gibbons.

He was behind the leaders on straightening, but found a gap round the 200m mark, driving the filly through for victory.

“She’s been slow maturing but she’s getting there, and I like her a lot.

“She was very impressive in her trial last week and her work has been great.

“She just keeps improving all the time and she’s exciting.”

Waugh said it was great to see the owners get a winner, particularly Jim Lee, a long-time client who she described as “very loyal.”

Great News ($2.70) was resuming after two provincial placings in her first preparation and had finished second in a trial at Gosford to Miss Fabulass.

She brought up her first win beating the Bryce Heys trained Key Largo ($21), with the $1.75 favourite Ballistic Missile, from the Joe Pride stable, third.

Anders is on the way to justifying his expensive price tag after his dominant seven length win in the 2YO maiden.

The Not A Single Doubt colt, a $670,00 Magic Millions purchase, had the 1100m COCA-COLA 2YO MAIDEN won at the turn, drawing away from his opposition as he went to the line.

The Maher Eustace stable has always had a strong opinion of the colt, who debuted in the spring with a fourth at Randwick, followed by a Queensland campaign where he finished third at Eagle Farm and sixth in the Gold Nugget on the Gold Coast.

He resumed with a second at Kembla on April 28 and looks set to return to metropolitan class, following his breakthrough Wyong win.

Anders jumped well with jockey Ash Morgan settling him just behind the leader, before hitting the front around the 600m mark and pulling away for a commanding win.

A change of riding tactics proved to be a winning move for the Keegan-Attard trained Reiby’s Regent in the WYONG’S NEXT RACE DAY THURSDAY JUNE 4 BENCHMARK 64 over 1350m.

The four-year-old by Uncle Mo, left his rivals in his wake with Keagan Latham leading from barrier to post to score a three-length win.

Jason Attard said he had left the riding instructions to Latham after a downgrade in the track had him concerned.

“He had failed before on heavy tracks, but they were quite wet, and I was just concerned if this was a soft 7 or a heavy 8.

“We came here pretty confident but then we had that downpour of rain, so I did have a query.

“I left it up to Keagan, but I was thinking we may have been a little closer than we were at Newcastle last start.”

Reiby’s Regent was narrowly beaten at Newcastle on May 2 with no luck in the race.

The Wyong win was his second in 10 starts, both on the same track.

“There has been some good form around him, and he’s got plenty of ability,” Attard said.

Salsa Man ($7) from the Perry stable was second, with Mo The Great ($11) trained by Kim Waugh, third.

Mitch Newman has a good opinion of his filly Diva Bella who brought up back to back wins taking out the DE BORTOLI WINES CLASS 1 over 1200m in impressive style.

Newman seems to have found the key to the Reward For Effort filly, who has had two wins and two placings since switching from the Tim Martin stable.

“She’s a filly with nice ability and hopefully she can go on with it,” Newman said following the win.

“It was a good effort today. She had a good draw and nice pull in the weights on the favourite.

“She seemed to plough through the going. There is a bit of wet form in her breeding and she ticked that box today.

Cejay Graham had Diva Bella ($5) in a good position, just behind the leader, taking her to the front on straightening and drawing away on the line to win by two lengths.

Only five days back from a fall Grant Buckley continued his winning run lifting the Godolphin trained Delicately ($7) to victory.

Buckley was sidelined with a broken collarbone and torn chest muscle for almost six weeks and has now booted home four winners since his return on May 9.

He produced a strong ride to steer Medaglia D’Oro filly Delicately to a half-length victory in the WYONGRACECLUB.COM.AU 3YO MAIDEN over 1350m.

Buckley settled the three-year-old, just behind the leaders, drawing level with Timon Stinger in the straight.

He lifted the filly to the line, bringing up her debut win at her fourth start.

Timon Stinger ($7.50) trained by Lindsey Kennedy was second, over the $2.70 race favourite Shuwaamekh from the Waterhouse/Bott stable.

Crown Affair ($5.50) confirmed his status as a stayer putting almost eight lengths on his opposition to win the 2100m CARLTON & UNITED BREWERIES MAIDEN.

Trainer David Payne has always had a good opinion of the Snitzel gelding who raced in the Group 3 Canonbury as a two-year-old.

He was passed in by owner/breeder John Cordina as a yearling for just shy of $1million.

“I like to get them in and having a run early because it is good to have that experience,” Payne said. “I knew he was going to get better with time and more ground.”

The now three-year-old proved Payne right with placings over the 1900m and 1800m in his last two starts at Gosford and Hawkesbury.

The 2100m at Wyong looked ideal and he didn’t disappoint breaking through for his debut win at his 13th career start.

Crown Affair jumped well, and Rory Hutchings took him to the lead, maintaining the front throughout and kicking away in the final stages.

He beat the Perry trained The Borough ($19), with Spring Secret ($17) trained by Paul Niceforo, third.

It was a race to race double for Rory Hutchings who pounced on the leaders to claim victory on the Joe Pride trained Stockman.

The three-year-old had been looking for more ground and relished a downgrade in the track to take out the SKY RACING CLASS 1 over 1600m.

Hutchings brought the Tavistock gelding down the outside in the straight, after it had looked like a race in two with Benfica Maid and Significance fighting out the finish.

Stockman swooped on the line to score a half-length win.

It was his second victory from six starts, having tasted success over the 1300m at Goulburn when resuming.

“He’s got fantastic pedigree to stay with quite a few Derby winners having the same breeding.

“It was an excellent win at Goulburn and there were excuses last start.

“He’s got stamina and that’s a big plus.

“It’s good to see him out over the mile and even beyond. That’s when we are going to see the best of him.”

Stockman ($5) beat the $2.70 favourite Benfica Maid, trained by Jason Coyle, with Significance, ($3.90), from the O’Shea stable, two lengths behind in third.