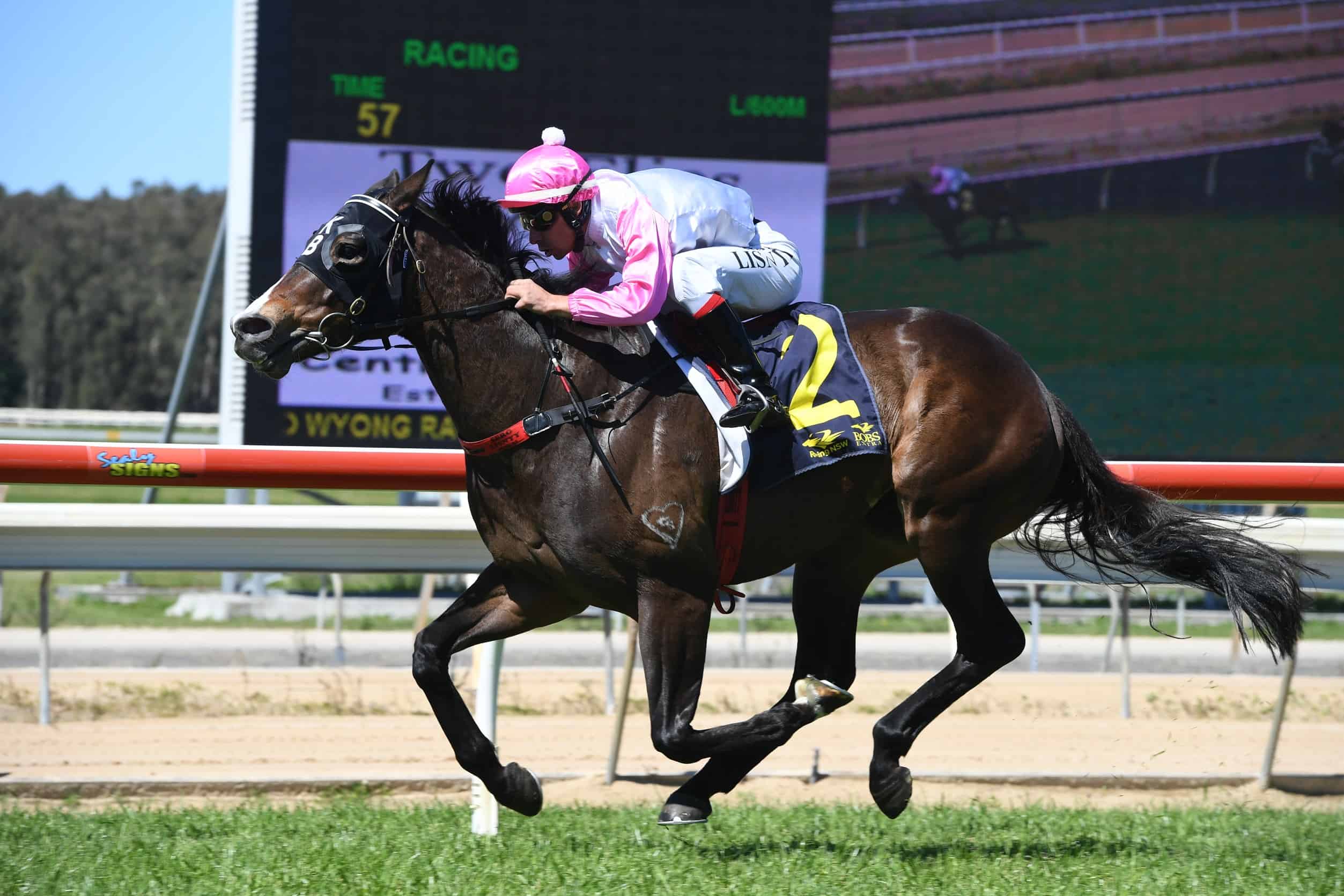 Kristen Buchanan’s Open Day was cause for plenty of celebration after the stable scored a race to race double on the Wyong program.

Buchanan had organised the function for owners to start after her three horses had raced but the champagne arrived early for two lots of winning owners after promising stayer Jazzland scored first-up from a spell and Designated (picture Steve Hart), a horse Buchanan has a high opinion of, broke through for his maiden victory in the previous race.

“There is plenty of celebrate now,” an excited Buchanan said. “It’s always great to get a win on the home track, let alone two and it’s timed in so well with the Open Day.

“I’m excited about both these horses going forward.”

The Rubick gelding proved too strong for his opposition to take out the 1000m TWO FLIES PUNTERS CLUB 3YO MAIDEN.

Showing good gate speed, jockey Serg Lisnyy was able to take the three-year-old to an early lead which he maintained throughout, drawing away in the final stages to win by almost a length.

“I think we might have a nice horse on our hands here,” Buchanan said.

“He had a few frustrating runs last preparation and it’s really great to see him get up and do that first up today.

“He is not really at his best yet in his coat, but we’ve been very happy with him in the stable. I think he has really matured. Last preparation we did a fair bit of racing, a fair bit of travelling and I think we will reap the rewards of that this time in.

“He had been running great races for the stable but just needed a bit more time to mature.”

Buchanan said she would now consider a Magic Millions race for Designated.

“I’d love to try and see if we can head in that direction. We will see how he pulls up after today and go from there.”

“He is my first horse for them and a I have another lovely filly called Tuuli who is trialling on Wednesday.”

Buchanan believes Jazzland could be up to Melbourne Spring Carnival class next year after his first up win in the MEN OF FOOTBALL CENTRAL COAST MEMBERS CONDITIONAL BM 70 over 1350m.

“The tactic today was to be on the bridle. I thought in the 1350m there would be more speed on, and he would be further back. Josh (Parr) had him on the bridle for the whole race really. I can’t ask for more than that and it’s great that he won.

“We want to be in Melbourne this time next year. I love this horse, he’s just had to have time to grow up. He is a genuine stayer, going through his trade. Long term I just think he’s going to be an exceptional stayer.”

It’s been more than two years since the Wyong galloper tasted success and Seelin believes there are still more wins to come for the nine-year-old.

The popular horse was greeted by applause from the crowd when he returned to scale.

Jockey Grant Buckley had Isorich travelling in his normal pattern, just outside the leader and on straightening Silent General headed him before the gelding fought back to record his 11th career win in a nail-biting finish.

“He never stopped trying and he never does,” Seelin said. “He’s going as good as ever really. We’ve just got to find decent barriers and the right races. They put a length on him then and he came back.”

Seelin said he would probably look at a return to a Metropolitan race for Isorich.

“Now that he’s down a bit in the ratings he is easier to place. He’ll still have to carry a bit of weight, but he’ll show up in town again.”

The win brought up a double on the day for Buckley.

Aaron Bullock has tipped a bright future for Darleb after the colt’s impressive debut win over 1200m.

The Kris Lees trained three-year-old had impressed the stable in his two trials leading up to the Wyong run and was too sharp for his opposition in the MEN OF FOOTBALL CENTRAL COAST MAIDEN, winning by a neck.

Bullock settled Darleb just behind the early leader and favourite Giselle Anne ($1.40) for much of the race, before drawing level on straightening.

The pair were in a head bobbing battle down the straight, with Darleb gaining ascendency on the line.

“I’ve sat on him in track work and in trials and thought he was going well,” Bullock said.

“Today in the race he gave me a really good feel and I think he has bigger things ahead.”

Danny Greer, representing the stable, said Darleb was “very mature” for a horse going into his first race.

“It was good to see him win like that today and I’d say Kris will look for something similar for him or possibly take him to a mid-week metropolitan race.”

Little Rocket Man ($14), trained by Greg McFarlane, was more than four lengths behind in third.

The Lonhro colt was having his fifth race start, having finished fourth when resuming on the Kensington track on October 2.

Jockey Grant Buckley settled the three-year-old midfield throughout before circling the field before the turn and kicking away in the early stages of the straight.

He raced strongly and was able to fight off late challenges by the fast finishing Stockman and Sky Diamonds.

“It was a very encouraging win,” stable representative Darren Beadman said. “James has given the horse plenty of time and it has paid dividends today.”

He praised the ride by Buckley, saying he had the horse in the “perfect position.”

“Grant gave him a lovely ride early. He’s only had one trial and then had a tough run first up over the 1400m. Today with the nice cushy run he was able to get into a good position. Grant could see the favourite was in a little bit of a predicament on the corner and made an early move, which proved to be the winning move.

“I won’t say the jockey took his foot off the pedal at the end, but I think the horse did. In saying that it was an encouraging win today.”

Shaibanat beat Stockman ($15) from the Pride stable by a head, with the Portelli trained Sky Diamonds ($14) third.

A well-rated ride by Blake Spriggs secured back to back wins for the Waterhouse/Bott trained Navy Cross in the 1600m MEN OF FOOTBALL CENTRAL COAST RACE DAY BM 64.

The I Am Invincible gelding, a $700,000 yearling purchase, was too strong for his opposition drawing away on the line to score by three and a quarter lengths.

Spriggs, who rode Navy Cross to his debut win at Goulburn on October 8, said there had been more improvement in the three-year-old.

“He’s well related to Sepoy and they’ve spent a bit of money on him. If they stay patient, he is just going to keep getting better and better.

“He is a horse that still doesn’t know what his job is but he’s slowly getting there.

“We had a nice time in front today and were able to come home in just over 33 which makes it hard for anything else and he still felt he had more to give.”

The Lee Curtis trained Iresign ($3.60) led all the way to take out the PETRO NATIONAL CLASS 1, bringing up back to back wins for the Rosehill galloper.

Rated well by jockey Jay Ford, the All too Hard gelding, is continuing to impress Curtis.

“It probably took me a few runs to get him fit this preparation, but he’s certainly found form now,” Curtis said.

“He’s a solid boy and last start and this start he’s probably found his fitness.

“We have an opinion of him. Jay has ridden him well there, his sectionals were good and the horse stuck on.”

Curtis said Iresign, who was having only his fifth start, hadn’t done a lot of racing and was still maturing.

“He’s certainly looking like he can go on and be a solid racehorse.”

Iresign, coming off a win at Gosford on October 3, has had two wins and two placings from his five starts.

He beat the Joe Pride trained Romalette ($9) by three quarters of a length, from the $2.30 favourite Bring The Ransom, from the Bjorn Baker stable.

A race to race double for jockey Jay Ford who took out the 1600m MEN OF FOOTBALL METRO & PROV MAIDEN on Marise ($10) for Chris Waller.

Having only his second start, the So You Think filly, was given a gun ride by Ford, who took a rails passage and ran down the leaders in the straight to win by a short half head.

Ford was impressed with the three-year-olds win and said the best is still ahead of her.

“She is a nice filly,” he said. “It’s only her second start and she’s gone straight to the mile. She travelled nicely but is still a bit green. I really like her tenacity because she dug deep in the end.”

Ford said he believed Marisse, raced by Toryburn Stud, would develop into a nice stayer.

“She’s doing everything right at this stage and looks to have a good future.”