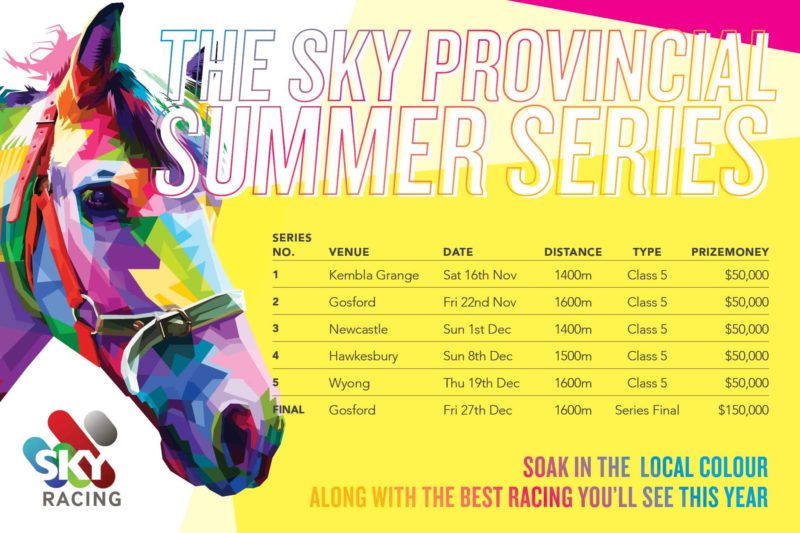 After a successful series in 2018, the Sky Provincial Series returns this summer. The $400,000 race series for provincial horses, is a joint venture of Racing NSW, Sky Racing and the five provincial race clubs of Wyong, Hawkesbury, Newcastle, Kembla Grange and Gosford.

The series is comprised of five $50,000 qualifying races that will be run across the NSW provincial clubs over a six week period, culminating in the $150,000 final over 1,600m, which will be held at Gosford on Saturday 27 December, 2019.

“Last years series was an immense success” Matt Benson Chairman of the NSW Provincial Racing Association stated. “The eventual winner ‘Bobbing’ went on to win the Provincial Championships too, so it shows that the quality horses took this series seriously as well” he concluded.

Restricted to horses trained by a NSW Provincial trainer in accordance with the 5 provincial clubs of PRANSW. To be eligible a horse must have had its last three starts for an eligible provincial trainer. SET WEIGHTS – Class 5 – 59kgs Class 4 – 57.5kgs Class 3 and below 56kgs. Fillies and Mares allowed 2kgs. No allowance for 3yos. If a ballot is required it will be done on benchmark order. 1st 2nd and 3rd qualify for the final. Once qualified, horses are NOT permitted to run in another Heat and MUST run in the final unless scratched by Stewards with a Vet’s Certificate. The 4th placegetter from each heat will be declared an emergency for the final in benchmark order. If equal Benchmark then by lot.