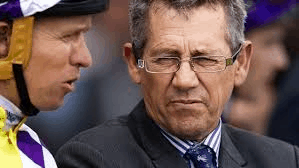 BARTLEY ON A ROLL

Tracey Bartley is enjoying one of his best starts to a season with eight winners in the first two months.

He has his small team firing with a winning strike rate just under 25 percent and hopes to continue that run with his two starters at Wyong on Thursday.

“It’s the best start I’ve had in recent years that’s for sure,” Bartley said.

“When I first moved over from Mudgee in 2010, we had a really good season with 28 winners. I came with a lot of horses who had won in the bush, but their ratings were really low, and they kept winning over here.

“I think this year I have better quality horses. They are horses we have bred or picked out at the sales and we have some clients that have given us some nice horses.

“The strike rate is terrific, and I hope we can keep that going.

“We have a really nice number of horses and it certainly makes it easier to get out of bed when they are going well, no risk in the world.”

He looks certain to better his last season’s tally of 19 winners and considers his two Wyong runners are both genuine chances.

Bartley believes a senior rider could turn around the form of his mare Bare Naked Lady, who lines up in the 1100m Class 2.

He is hoping the four-year-old, who has two wins and six placings from 13 starts, can hit back from her last on the Kensington track over 1100m on October 2.

“She was disappointing at Randwick last start. I think she is having a lend of the apprentices so that’s why we’ve opted for a senior rider.

“She didn’t look real genuine when Chris Williams went for her that day. We’ve dropped her back in class here and put Josh Parr on. If she goes to her old form, she will be hard to beat around here.

“She just needed a run at her first start back at Hawkesbury and knocked up. I was really happy going into the other day and I thought she was entitled to give a better kick when he asked for it. When the others got to her, she tried to go but she had no room, so there was an excuse there.”

The Albrecht four-year-old has had two wins over 1400m from nine starts and Bartley believes she will handle the extra distance.

“She’s been racing really well in the bush and this is a step up in company for her,” he said.

“I think she’s earned her chance and should run really well.”

The first of eight races at the club’s Go Electrical Raceday, gets underway at 1.25pm.