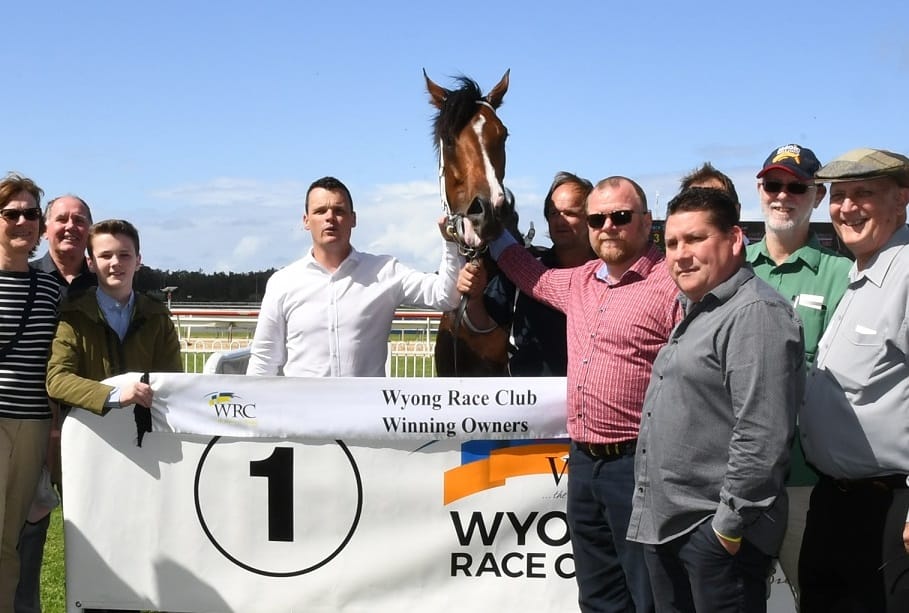 A WINNING WEEK FOR PRIDE

Confidence was the key for Warwick Farm based Joe Pride who took out the training honours with a winning treble.

Pride’s consistent three-year-old Innisbrook brought up his debut win over 1200m, while Is That So proved too strong in 1600m Maiden.

The winning run continued in the last with Eveleigh making it back to back wins in the Class 2 over 1100m.

“I’m a firm believer that you can’t beat raceday confidence and I came here very confident today. You always get a feel for them when you saddle them up,” Pride said.

“I love racing at Wyong. It’s always been a good track for me and certainly was today. That’s five wins in the week for the stable, so things are going really well.”

Hinchinbrook gelding Innisbrook ($5) will earn a well-deserved rest after breaking through for his maiden win.

In a head-bobbing finish to the CABAC-PRYSMIAN-PIERLITE CG&E MAIDEN with the Snowden trained Oslo ($4.20), Innisbrook managed a narrow short half head victory on the line.

Adam Hyeronimus took the gelding to the lead on straightening, with the horse showing plenty of fight to hold out the challengers.

“He showed some real fight there last week and it was there to be seen again today,” Pride said.

“There was a fair bit of pressure in the race. The second horse had every opportunity to pass us. It’s good, I like what he is showing. The early signs are really good for this horse.”

Pride said Innisbrook had improved significantly since an unimpressive debut on August 31.

“His first start was an absolute shocker, he got lost at Hawkesbury, was on one rein and didn’t compete.

“We changed the gear around a bit and his three runs since have been excellent. He will head for the paddock now but a horse with good improvement in him for sure.

“They are really reliable these Hinchinbrook horses. I’m a big fan of them. He unfortunately passed away about a year ago, but his horses have all got that characteristic of being really tenacious.

The $2.40 favourite Spaceboy from the Portelli stable, was a half-length third.

Is That So ($3.20), raced by Proven Thoroughbreds and ridden by Josh Parr, brought up the second win for the stable.

The four-year-old by So You Can Think, won the HAGER- ELECTRA-OMNI 4YO&UP MAIDEN by almost a length over the Anthony Cummings trained Natanya ($8), with Alam Mo Na ($6.50) from the Lees stable, third.

Pride said this was the horse’s first race over the distance and he believed he would get over more ground.

“He’s actually out of a really good mare, La Remlap, who I trained, who was really fast. There is pretty stout sort of pedigree around him and she got out over a trip.

“He’s just going to kick in with a bit of time and is getting better as he gets older. He’s no world beater but if he keeps improving, he might make us a horse.”

A decision by Pride to scratch Eveleigh ($13) from Wednesday’s Metropolitan meeting proved to be a winning one, with the Delago Deluxe mare bringing up her second successive wins since transferring to the stable.

“I was going to start her in Sydney but told the owners I didn’t think she was up to it,” Pride laughed. “She will certainly be heading to town now on the strength of that win.

“It was a great run today and I thought she looked the winner from a long way out.”

The four-year-old mare, ridden by Robbie Dolan, came from behind in the straight to run down the leaders for a three quarter of a length win.

Brad Widdup has no qualms about heading his filly Akari to the Listed Reginald Allen Stakes on October 19 following her maiden win at Wyong over the 1200m.

It was a big relief for Widdup to see the three-year-old, a million-dollar yearling, break through at her fourth race start in the AUSSIE DUCT- IPD- SAL- PSA F&M MAIDEN.

In two previous runs she had finished second and third behind boom filly Libertini, and at her most recent outing at Wyong on September 24 was narrowly beaten by Regimental Band.

“The quality of horses she’s been racing against I don’t think it would be too big of an ask to start her in the Reginald Allen,” Widdup said.

“I think she will take plenty of confidence after finally breaking through today and she should be suited to the 1400m the way she went through the line today.

“She had to do it tough again today and still got there, so it’s nice to get the win.”

Jockey Nash Rawiller was caught three-wide in stages, but the filly still managed to hit the lead in the straight and hold out the fast finishing Compatriot.

“She lengthened beautifully today. She’s been a bit unlucky as she was again today but that’s why we had Nash on her, it helped a lot,” Widdup said.

“It would be nice to draw a barrier and get a bit of cover, but we will step her up now to 1400m. I think she’s going to be a nicer filly next time in, and it will be good to get her running consistently and getting into a pattern of racing.

“The pedigree suggests she might even get out to a mile. She’s still learning and I’m very relieved to get this win.”

Akari, who was sent out $1.65 favourite, beat the Gerald Ryan trained Compatriot ($41) in a photo finish, with All Star Rocket ($21) from the Waterhouse/Bott stable, a close third.

Darby Racing look to have a promising stayer on their hands, with Canasta ($1.70fav) impressing in his first preparation.

The Makfi gelding brought up his second win at start six, comfortably handling the step up to 2100m.

Trained by Bjorn Baker and ridden by Tim Clark, the four-year-old put more than three lengths on his opposition to take out the HANECO CLASS 1 & MAIDEN.

Clark said Canasta, who has had six starts for two wins and three placings, was still improving.

“He was always in control and is going really well for a horse in his first preparation. He will be better when he has something to chase down but he’s doing a great job.”

Steve McIvor from Darby Racing said Clark had ridden Canasta to a tee.

“He wanted to get going and get everything off the bit and he did. The rest was history,” he said.

“He has taken improvement with every run and that’s very positive. He’s had two wins from six starts and has only been out of the top three placings once. That says it all.

“He relaxes beautifully, and the best thing is it’s his first preparation so naturally he’s going to learn.

“I’m not sure what Bjorn will do but we’ll take him home and let the dust settle. He might have another start or be tipped out.”

A forced change of riding tactics didn’t impede the chances of Aesop’s Fable, with the Foxwedge filly bringing up her third successive win in the LEGRAND AUST CLASS 2 over 1600m.

The three-year-old was coming off successful runs at Canberra and Goulburn where she raced on the pace, but after being caught wide Jean Van Overmiere was forced to settle near the rear of the field.

He took off coming into the turn and charged down the outside to run down the leader, City Of Love, on the line.

“We were hoping to be a bit more prominent today but as it’s worked out, we had to go to plan B and she’s hit the line. Maybe that’s the way to ride her,” he said.

“Coming into today with two winners, a filly this time of the year in that sort of form, you’ve got to stay on the right side of them.

“It looks like she may get over more ground, but we will wait and see. Depending on how she pulls up I’d say John will look for another Provincial race.

“It’s hard to tip her out for a spell when she’s racing so well.”

Aesop’s Fable ($7.50) beat the Waugh trained race favourite City Of Love ($2.60) by half a length, with Brigid Of Kildare ($8) from the Matthew Smith stable, third.

The Waller stable is hoping Kavalmo can live up to the form of his half-brother Paret after his victory in the CLIPSAL BY SCHNEIDER MAIDEN over 1350m.

The Charm Spirit colt, ridden by Glyn Schofield, proved too strong for his opposition winning by a length and a half.

Foreman Glenn Barnes said there had been excuses for the three-year-old at his last start at Hawkesbury.

“It was a good win and hopefully that’s the start for him. I hope he can really switch on after that,” he said.

“He was unlucky last start when he finished fifth at Hawkesbury and was caught wide but didn’t surrender. We were hopeful today and just wanted him to get the win on the board.

“It was a great ride by Glyn. It panned out perfect and he had him exactly where we wanted him to be.”

Barnes said they had a good opinion of the $100,000 yearling and would likely look for another Provincial race.

“He should take plenty of confidence out of this and hopefully go on with it.

“His brother Paret was a very handy horse so it will be good if he can match him on the track.”

Gabrielle Englebrecht admitted she was surprised when Arrogant Lass ($19) upset some of the more favoured runners to take out the OMEGA- TRADER- MATCHMASTER 4YO&UP BENCHMARK 64 over 1350m.

The Shamus Award mare, having her tenth start, was coming off an eighth at Goulburn on September 13.

“I’m never confident, I’ve been around racing too long,” an excited Englebrecht said.

“In saying that she’s been going very well but her racing has been a bit disappointing. At Goulburn the jockey thought she wouldn’t stretch out on the hard track, but she got the ideal track condition with a good three here.

“I was a little bit on the fence today. Her work and everything had been fantastic, but I didn’t want to get carried away.

“She seemed very comfortable on that surface and it was a good ride by Jay (Ford).

“We’ll just take it step by step with her and work her way through the grades. Everyone is happy to win races wherever they are. It’s a big owner group and they will be very excited today.”

Wyong runner, Isorich ($4) from the Wayne Seelin stable was half length behind in second, with the Donna Griesdale trained Chief In Command ($15) third.