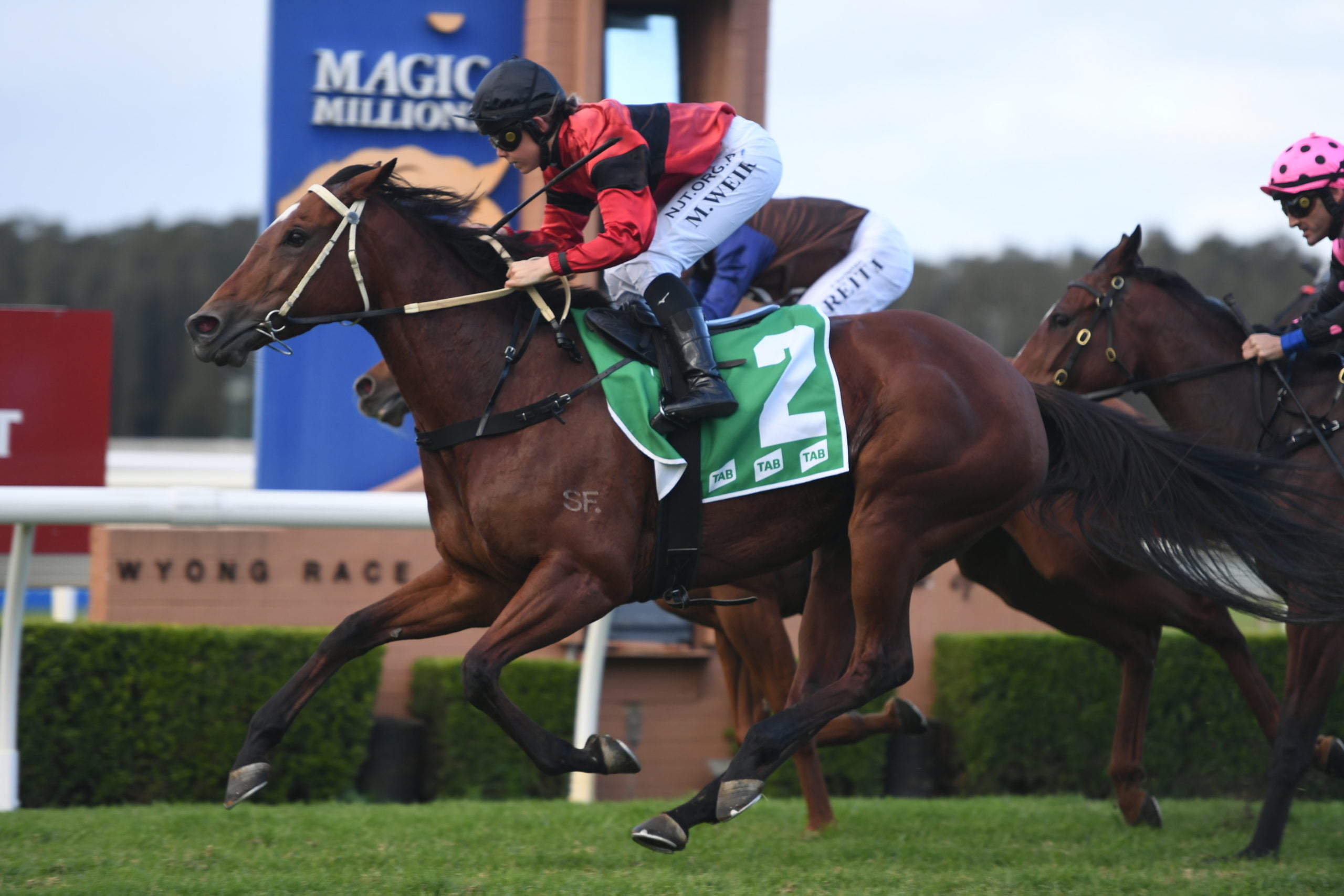 Veteran local trainer Stan Thomas was in the winner’s circle with his tough mare Ondo Pasa in a race honouring a fellow Wyong trainer Johnnie Roberts.

The six-year-old brought up her eighth career win and the third on her home track.

She was disappointing at her last start at Wyong on May 14 after being caught three wide but atoned for that with a convincing one and a half-length victory.

Mikayla Weir continued a great association with Ondo Pasa, having combined with her in her last three wins.

Kindly given to Thomas by a couple of valued friends, Ondo Pasa has now amassed more than $215,000 in prizemoney.

It was a popular win for the 83-year-old trainer, who has three horses in work.

“She’s been a great horse for me. She tries hard every time she goes around and that’s all you can ask,” Thomas said.

Weir had Ondo Pasa ($9) toward the rear of the field in the early stages, circling the field on the turn and fighting on in the straight to claim victory.

Tom Sherry extended his lead in the provincial jockey’s premiership and took out the riding honours at Wyong with a winning double.

Currently the State’s leading apprentice, Sherry now has 46 wins in the premiership, five ahead of his nearest rival.

The first leg of his double came on De Grawin in the 1000m DE BORTOLI WINES MAIDEN PLATE.

He piloted the Joe Pride trained filly to a length win, in her first run for the new stable.

The Snitzel filly was placed twice in two starts for Matt Vella, before being transferred to Pride.

She had trialled well leading into the Wyong race, and was heavily supported by punters starting at $2.20.

Sherry drove the filly to the lead from the barriers and she travelled well throughout, holding out her rivals, to score by a length.

Sherry, who had been favourite in the jockey’s challenge, had to wait until the final race to bring up his double.

He combined with his master Mark Newnham, to win the WYONG’S NEXT RACE DAY THURSDAY JUNE 18 CG&E BENCHMARK 64 HANDICAP over 1350m.

Newnham had the Shamus Award gelding primed for a strong first up performance, following an eye-catching trial win at Warwick Farm on May 22.
He was sent out $4.20 equal favourite and didn’t disappoint, beating fellow Darby Racing runner Amoretti by a long neck.

Sherry had the four-year-old three-wide with cover in the early stages, looming up on the turn, before hitting the front around the 200m.

He was able to hold out the Portelli trained Amortetti ($26), with Cubix ($4.20 eqfav) from the Matthew Dunn stable, two lengths behind in third.

A $150,000 yearling, Academy has now had three wins from eight starts.

All Things put on a dominant staying performance to take out the 2100m SKY RACING CLASS 1 & MAIDEN PLATE in his first trip over the distance.

The So You Think gelding, trained by John Sargent, is compiling an impressive record with two wins and three placings from seven starts.

Foreman Campbell Ashby believes the four-year-old will continue to improve.

“That’s his trip and I think he will get further than that,” he said.

“Andrew (Gibbons) was able to get him into a good spot and into his rhythm.

“He’s a momentum horse and he got that today. He out-toughed them all.

“He is still very immature, and he’ll improve from that win.”

Gibbons settled All Things just behind the leaders, before moving up around the 500m and hitting the lead on straightening.

He got into a battle with Seporto in the final stages but kicked on the line to win by a half neck.

All Things ($6) was coming off a fourth at Newcastle over the 1800m, having broken through for his debut win the previous start.

A strong ride by Lee Magorrian secured victory for the Waller trained April Thunder in the GREAT NORTHERN MAIDEN HANDICAP over 1600m.

Magorrian had to work hard on the Sebring filly after she looked to have dropped the bit mid-race.

She responded to his hard riding, hitting the front in the straight to score a three quarter of a length win.

April Thunder, a $120,000 yearling, had been strong on debut at Randwick in December finishing third but then failed at her subsequent four starts.

She was coming off a seventh at Hawkesbury last start and seemed to appreciate the step up to 1600m.

She was sent out $3.80 second favourite and didn’t disappoint, with the $3.40 favourite and early leader, California Spell, finishing back in the field.

Jazirat ($8) from the Godolphin stable put in a much-improved performance to finish second, with Our Cheeky Monkey ($5), trained by Gary Portelli, three and a half lengths behind in third.

An exciting three-way finish in the 1100m TAB.COM.AU CLASS 2 HANDICAP with the Terry Drayton trained Belladeel ($15) snatching victory on the line.

The Dundeel gelding upset some of the more favoured runners to bring up his second career win.

There was late support in the betting for the four-year-old, who was coming off an unplaced run at Scone on May 15.

Chris O’Brien settled Belladeel just off the pace and chasing the two leaders in the straight looked certain to finish third.

O’Brien drove him to the line, and he was declared a half head winner in a photo finish.

Previously trained by Chris Waller, Belladeel was having his sixth start for the new stable. He beat Shadow Bridge ($4.80) from the Mark Newnham stable, with the Snowden trained Crimlet ($5.50) third.