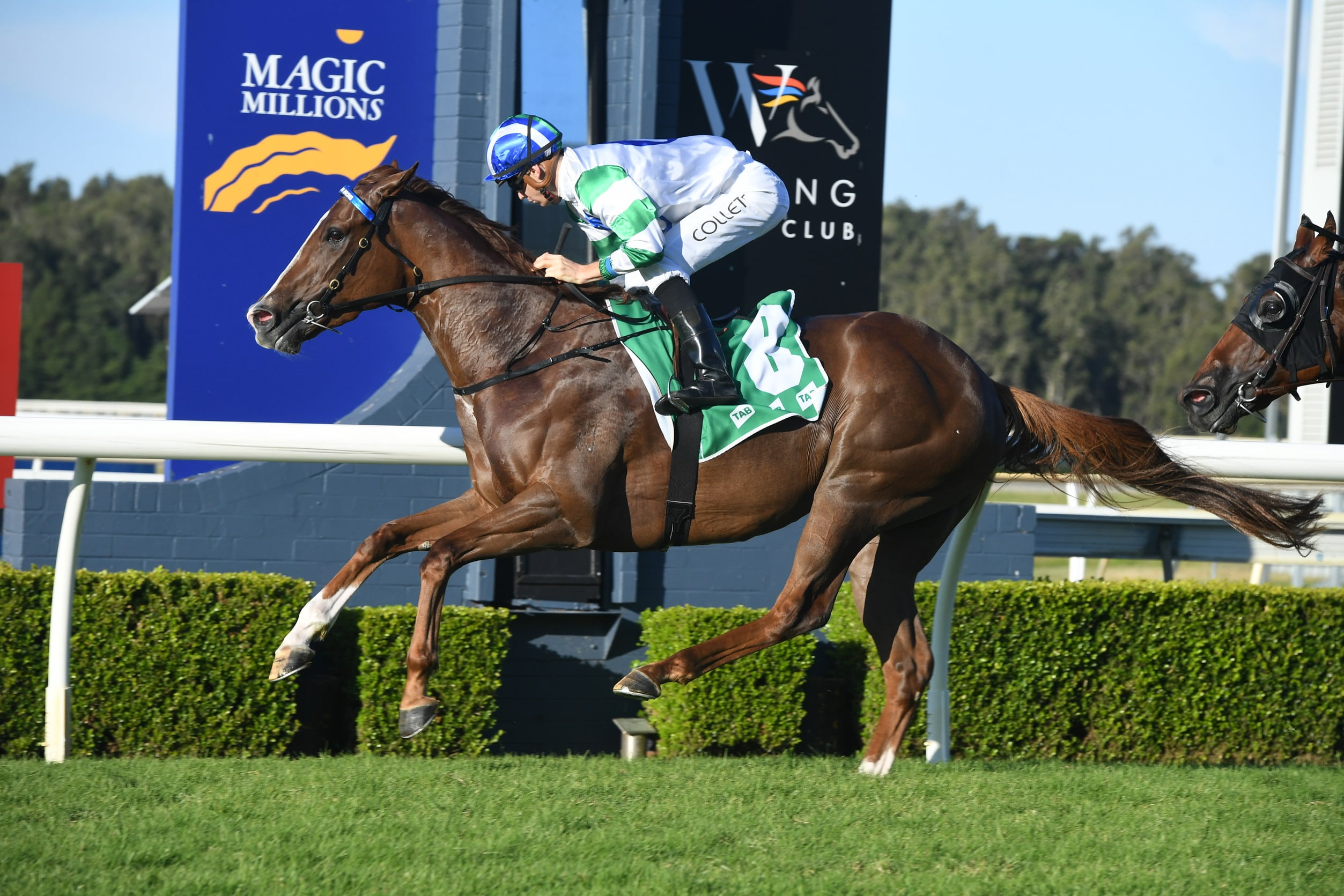 Damien Lane’s filly Zorocat was rewarded for her consistency scoring a tough win over 1200m on her home track.

The three-year-old had been narrowly beaten at her past two starts at Newcastle over the same distance.

The win is the stable’s fourth in two weeks, taking Lane to 28 for the season to date.

Lane had always believed the Zorocat would be better suited at Wyong and was proved right when she brought up her second win at start eight in the HMA FLOW & INDUSTRIAL CLASS 1.

The only concern had been the wide barrier, but Jason Collett was able to ease the Toronado filly over from barrier 10 to take the lead.

He maintained the front throughout and was able to hold out the fast-finishing Mix, from the Widdup stable, to win by almost a length.

“I think she’s a filly with better races in store for her,” Lane said.

“She’s been a work in progress. She’s a bit hot headed but has shown us ability from day one.

“When she can harness that energy and we get up to 1400m she’ll be quite a nice filly.”

Lane said Zorocat had been primed for the win.

“She’s been a bit stiff in both runs at Newcastle and was nabbed late by a couple of smart horses.

“Wyong was always going to suit her better if she got the right run.

“She was probably spot on today and Jason did a great job.

The win brought up a double for Collett, who said the filly gave him a “good feel.”

Paul Perry’s consistent three-year-old Saquon could be headed for better things on the strength of his win in the 1350m HMA WEAR SOLUTIONS BENCHMARK 64.

The No Nay Never gelding, a $150,000 yearling, brought up his second win at start six, with three seconds to his name.

Saquon didn’t have it all his own way, with The Crimson Idol, from the Jeff Englebrecht stable, going head-to-head in the final stages of the race.

Jockey Tim Clark described it as a “tough win.”

“Full credit to the horse. He had to dig in with a big weight. For a young horse that bodes well for the future,” he said.

“He was there to be beaten at the furlong, but he really dug in and got the job done.

“He’s quite a nice three-year-old and is going to progress to some better races than Wyong on a Thursday.

“He’s got a racing style about him as well and that’s going to take him a long way.”

Saquon, the $1.70 race favourite, beat The Crimson Idol by a short half head, with Waller’s Canadian Spice ($11), third.

Wyong specialist Stoltz continued his winning association with the track bringing up his third victory from three starts in them 1000m HMA GEOTECHNICAL BENCHMARK 64.

Annabel Neasham’s speedy More Than Ready gelding proved way too strong for his opposition, drawing away to win by almost two lengths.

It was a well rated ride by apprentice Louise Day, who sat just off the speed, bringing the three-year-old to the outside on straightening and drawing away in the final stages.

Day described it as Stotz’s most convincing win.

“He obviously loves it around this track, its three from three now and Annabel has done a great job with him.

“To make him fire first up for probably his most convincing win is a great effort.

“When I asked him to go when we came around the bend he just picked up and it was a really class win.

“I would say he will be quite competitive come the winter.”

A $200,000 Magic Millions yearling, Stoltz was having his seventh career start, with three wins and two placings to his name.

He was sent out $4.60 second favourite and beat Brett Partelle’s Perfect Style ($4.60), with Rahini Factor, trained by Greg McFarlane ($11) third.

Leave Me Be impressed jockey Lee Magorrian with her strong win in the HMA GROUP MAIDEN over 1200m.

The NIcconi filly, having her third career start, drew away from her opposition in the final stages to win by half a length.

“I think she should get a city win this preparation,” he said.

“She raced well the whole way today and knuckled down well over the last bit.

“I got on the back of the favourite from the 500m onwards and I knew she was going to be hard to beat.”

Magorrian said Leave Me Be would get over more ground, possibly up to 1600m.

The Joe Pride trained colt looked the winner in the straight, before being run down.

Leave Me Be was bred by former trainer Bob Haire, who retains a share in the ownership.

Jarrod Austin’s confidence in Fattore Stella paid off with the mare breaking through for her debut win in the 1350m HMA INSTRUMENTATION 4YO & UP MAIDEN.

Jess Taylor gave the four-year-old a great rails run in the straight, drawing away on the line to win by more than a length.

Austin had been confident Fattore Stella would be at her best.

“It’s the first time in a long time that I’ve come to the races with her ticking every box,” he said.

“She’s been working good and travelling better with the blinkers on.

“It certainly looked like an attractive race for her on paper and panned out that way.

“It wasn’t the strongest race, but you’ve got to be there and be in good order to win and she did just that.”

Austin praised the ride by Taylor.

“You rarely see Jess make a mistake. She rides a bit of work for us and it good to see her get a winner for us.”

Fattore Stella ($6.50) beat Company Line ($14) from the Nick Mitchell stable, with Above Reserve ($5) trained by Jim and Greg Lee, third.

Do This All Day put in a superior staying performance to beat some of his more fancied rivals in the 2100m HMA POWER GENERATION MAIDEN.

The Clare Cunningham trained three-year-old was having his fourth career start and coming off a 2200m at Nowra on April 20 where he finished just two lengths behind the winner.

Jason Collett gave the gelding a great ride, patiently sitting midfield before taking a rails run on straightening, bursting through in the final stages to win by a length.

“I’ve always liked this horse from the first time I saw him in the paddock,” Cunningham said.

“I had the pick of a couple of horses at Domeland and chose him.

“He’s a really tough character and showed that today. He was on a ten day back up but showed us no reason not to run him.

“He continues to relish his training and it was only his fourth start today.

“It is so good to get the job done and I think he has a bit more under his belt.”

The well supported Squanto kept punters happy with a convincing win in the HMA MATERIALS HANDLING CLASS 1 over 1600m.

The Sebring gelding was given a gun ride by Brenton Avdulla, who waited patiently for a gap to open in the straight, before steering the three-year-old to a two and a half length win.

The Gary Portelli trained Squanto, raced by Max Whitby and Neil Wherrett, was having his 10th career start, resuming at Newcastle on April 10 for a third over 1200m.

Avdulla said Squanto should be able to progress through his grades.

“It was a good training effort by Gaz. It’s never easy stepping up from 1200m to a mile and he went well.

“With the quick tempo I had to back off and take my medicine and sit there behind them and be patient.

“He quickened well when the gap came. It was a soft win in the end and there’s no reason why he can’t go through his grades.”