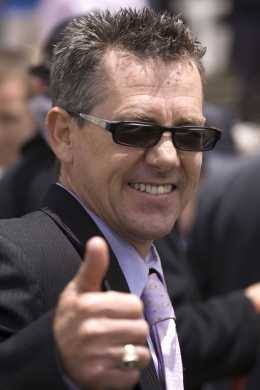 And whilst the popular Wyong trainer doesn’t have anywhere near as far to travel his promising youngster Kiss Sum as with yesterday’s easy Wellington winner Enamour, he is keen to get a similar result.

The lightly-raced gelding lines up in the Swansea Smash Repairs 2YO Maiden Plate (1100m), and will be ridden by former Canberra apprentice Patrick Scorse, who recently joined Bartley’s stable.

Though Scorse won’t be able to claim all of his 3kg entitlement, his new master is keen to give him his chance to break back into the provincial scene.

“Pat will claim perhaps 2kg on our horse,” Bartley said this morning.

“He had a couple of rides at Newcastle last Saturday, and finished second on Allan Denham’s Gidgee Guy.”

Scorse, who has ridden 117 winners, has fond memories of Wyong. At his first ride at his now home track in April, 2018, he won a heat of the Rising Star Series for apprentices on Cuba for Randwick trainer John Thompson.

Bartley is looking forward to giving Kiss Sum his second start tomorrow after a debut second to another first starter Humble Star in the Star Kingdom 2YO (1000m) at Muswellbrook on April 30.

“I thought his run was really good that day,” Bartley said.

“He got caught in an awkward spot, and hit the front in the straight after being the widest runner on the home turn.

“The winner had an easier run and went through inside him, but our bloke toughed it out well.

“We will try to park him just off the speed tomorrow and give him his chance to finish off.

“He showed in his trials that he is a better chaser.”

The Snitzel colt was narrowly beaten in a 900m trial at Rosehill on April 27 by the promising Ranch Hand, who was photo-finished out of the Group 3 Ken Russell Classic (1200m) at the Gold Coast last Saturday.

Kiss Sum of course has a long way to go to rival the deeds of his trainer’s former stable star Sniper’s Bullet, but there is a real Group 1 “feel” about his presence at the Wyong meeting.

Bartley won three features at racing’s elite level (including the 2007 Stradbroke Handicap at Eagle Farm) with the rising 18-year-old, still hale and hearty and being cared for on a property at Yeoval in central-western NSW.

Kiss Sum’s dam Stolen Kisses (by Mossman) was prepared for her sole metropolitan win at Canterbury in January, 2014 by her 36-times Group 1 winning trainer, the late Guy Walter.

And the youngster’s sire Shamus Award, as a three-year-old, beat older rivals in the 2013 Cox Plate at The Valley.

Deficit will race in both blinkers and a lugging bit, and American Pharoah filly Decisive Move, who has won two recent trials at Randwick (April 9) and Rosehill (April 27), has blinkers.

Bartley’s other Wyong representative is Equestris (Grant Buckley), an $81 outsider for the My Local Broker 3YO Maiden Handicap (1350m).

Expatriate South African Keagan Latham has lost one of his rides as he bids to increase his lead in the NSW provincial premiership.

Latham has racked up 52 provincial winners since August 1, and holds a 12-win advantage over nearest rival Tommy Berry.

Latham’s other booking, My Snow Queen, won’t line up against Kiss Sum and company in the 2YO Maiden Plate.

Leading Hawkesbury trainer Brad Widdup has withdrawn Queen Bellissimo from the 1200m Class 1, and will rely on Beauchamp (Regan Bayliss).

“I decided to scratch Queen Bellissimo because of her awkward draw, and Beauchamp will race in a nose roll,” Widdup said.

Beauchamp was a $101 winner at Kembla Grange last August at only his third start, and has managed only one placing – at Nowra on April 20 at his latest run – from five subsequent appearances.

“The Nowra run when narrowly beaten was an improvement, but he hasn’t been the easiest horse to train to get rid of his habits,” Widdup said.

“Hopefully, putting a nose roll on him will have a good effect.”

Vanderland is a Warwick Farm absentee today, and instead will run at Wyong in the 1100m Maiden Handicap.

. The rail is out 3m for the entire circumference, and the track this morning was rated a “Soft 5”.