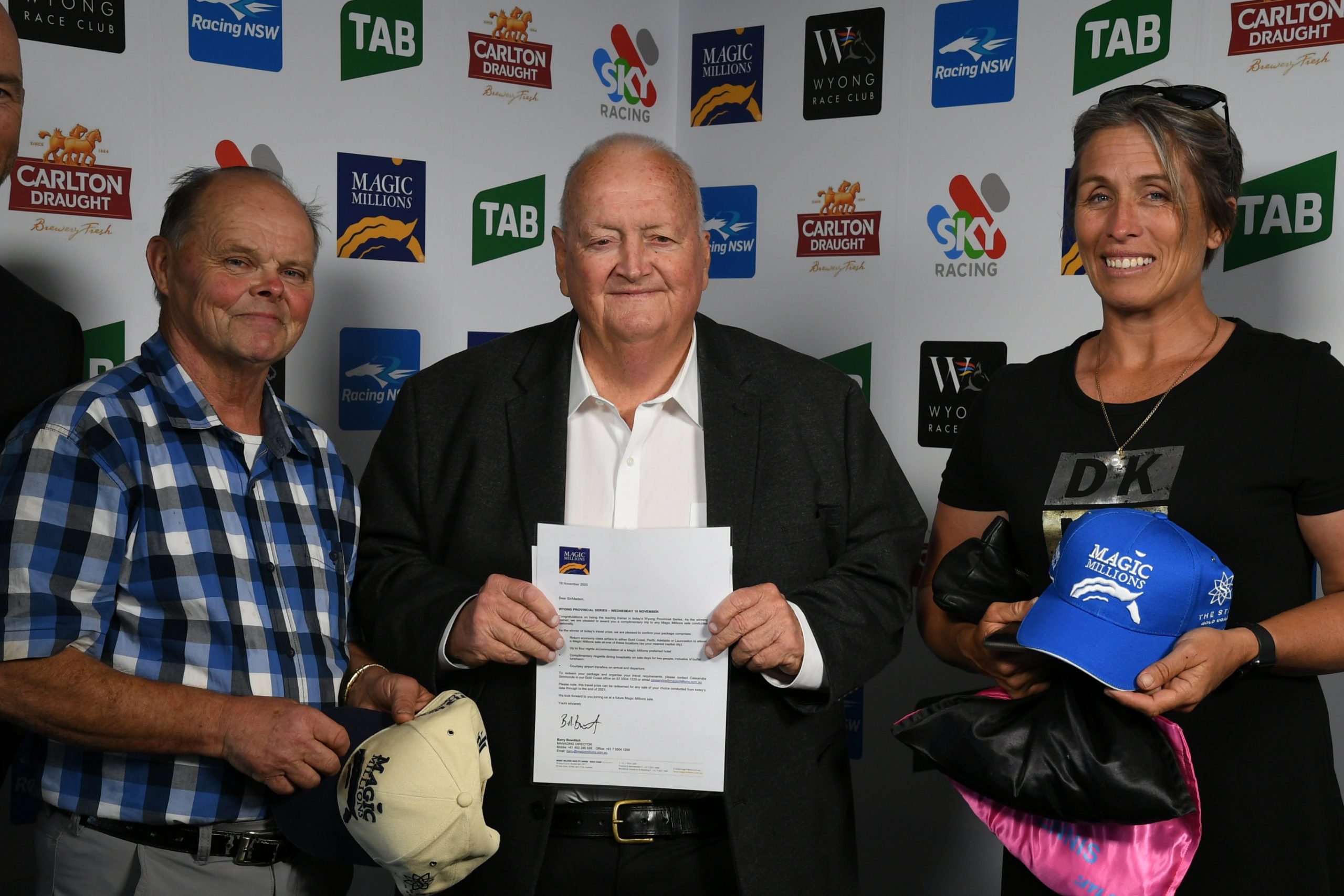 A great end to the second day of the Magic Millions Wyong Provincial Trainers Series with Stephen Schofield and Kristen Buchanan both winners.

Magic Millions generously donated a second prize pack of airfares, transfers and accommodation to the MM sale of choice, when the trainers finished on equal points after the meeting.

The final leg of the series will be on MM Day, December 16, with the overall winner receiving a $5000 credit to spend at the sales.

It was a super day of racing, with some impressive maiden winners including Can Do It and Beiber, who look likely to take the next step.

The Exceed and Excel three-year-old was resuming from a spell, having debuted at Kembla in May.

Two good trials heading into the race had her primed for a strong first up performance and she didn’t disappoint.

Jason Collett settled Reverse just behind the leaders, bringing her to the outside in the straight.

She was able to run down her rivals in the final stages, finishing strongly to record a half-length win.

Stable representative Josh Whittaker said the filly had matured a bit courtesy of the trials.

“She got some nice easy trials under her belt coming into this and that has helped her mature and get the job done today,” he said.

“She jumped well, not like her first start, and that was a big help. She’s a lovely bred filly and should go on with it.”

She beat the Mark Newnham trained That’s Better ($4.60), with Gallant Run ($5) from the Gary and John Moore stable, third.

Goulburn visitor Can Do It made short work of his opposition to take out the DE BORTOLI WINES MAIDEN over 1600metres in impressive style.

The three-year-old, a $100,000 Magic Millions yearling, had superior form heading into the race, having been placed twice this preparation.

He was coming off a fourth at Randwick on November 4 over the 1400m.

Can Do It, a colt by American sire No Nay Never, appreciated the rise in distance and dominated the field, posting a four and a half length win.

Chad Lever had him in the gun position throughout outside the leader, before speeding past the tiring Aunty on the turn.

He sped away on straightening and was never in danger in the final stages.

Can Do It looks certain to make a return to mid-week Metropolitan grade on the back of the win.

Trained by Jean Dubois, Can Do It was sent out $1.75 favourite, and beat Aunty ($15) trained by Anthony Cummings, with Lincoln Park ($7) from the Perry yard, a half-length behind in third.

The Waterhouse/Bott trained Belieber ($1.30fav) lived up to his trial form with a dominant maiden win over the 1100m.

Raced by the Tait family and sporting the colours made famous by champion Tie The Knot, Belieber cruised to the line three lengths ahead of his opposition in the TAB.COM.AU MAIDEN.

Tim Clark led throughout and had the rest of field off the bit and chasing a long way from home.

Neil Paine, representing the stable, said Gai and Adrian would be “rapt” with the win.

“It was a terrific win. Gai and Adrian think he is up to Sydney Saturday class and he showed he’s on track for that today,” he said.

“Let’s hope he can prove them right and go on with it.

“They like to send these horses up this way to learn their trade and get a win on the board. It gives them so much confidence.

“He hasn’t beat the greatest field, but it was the way he did it and the confidence he will take out of it.

“Once Tim released the brakes, he went away with it.”

Beiber, a Zoustar gelding, was having his third career start, having previously finished fourth at two Randwick starts.

He beat the Richard and Michael Freedman trained Screebe ($6.50), with Soldier’s Desire ($21) from the Widdup stable, third.

The Shooting To Win mare, a $150,000 MM yearling, was given a ten out of ten ride by Dolan, and was able to run over her opposition in the final stages to win by more than a length.

Raced by Triple Crown Syndications, Miss Sure Shot is becoming a Wyong specialist with both her wins recorded on the track.

The four-year-old mare brought up her maiden win in December 2019 and was coming off two Randwick trials prior to her latest outing.

She was well supported starting at $3.80 and beat the locally trained Mosht Up ($13) from the Schofield stable, with Designer Maid ($16) trained by Blake Fitzpatrick, third.

Miss Sure Shot has now had two wins and two placings from nine starts.

An exciting three-way finish in the GREAT NORTHERN ON TAP BENCHMARK 64 HANDICAP with the Matthew Smith trained Majella getting the bob on the line.

The six-year-old mare was given a great ride by Glyn Schofield and snatched victory by a long head, over the Jason Coyle trained Benfica Maid.

Schofield gave the Testa Rossa mare a nice rails run in the straight to bring up her third win at start 10.

Paul Rowe, representing the stable, said the mare had been luckless in a few of her recent runs.

“She’s always had her fair share of ability but has been unlucky with barriers and in the running in her past few starts,” he said.

“Today she got good midfield cover and Glyn got her to switch off. She finished the race off well.

“It was a good ride with Glyn pinching runs through the inside. He got a nice split in the straight and she hit the line well.”

The four-year-old led from barriers to post, defying plenty of mid-race pressure to score her fourth win from 12 starts, with Jeff Penza in the saddle.

Trainer Jan Bowen bred the Epaulette mare and races her, making the win even more special.

“There was plenty of pressure around the turn, but Jeff knows her and that paid off.

It was Penza’s second winning ride on the mare, the pair having tasted success at Muswellbrook on August 4.

Eminette was coming off a last start fourth at Muswellbrook over the 900m on November 3.

She earned late support in the betting at Wyong and was sent out $5.

Eminette beat the Ron Quinton trained Hibiscus Lady ($3.80), with the locally trained Upper East Side ($19) from the Buchanan stable, a length behind in third.

Big Bad Bruce broke through for his third career win, taking out the

The Not A Single Doubt gelding, trained by Joe Pride, is headed for metropolitan grade on the back of the win.

Sam Clipperton gave the five-year-old a super ride, weaving a passage in the straight before bursting clear in the final stages to win by more than two lengths over the 1200m.

“It was soft in the end and that’s the way they need to be if they are going to progress to the next stage,” Pride said.

“We wanted to take him back to metro grade this time around and will be heading that way now.

“It was a nice ride by Sam, giving him a cosy run just behind the speed and that won him the race.”

It was the second win for Triple Crown Syndications on the day, with Miss Sure Shot having taken out an earlier race.