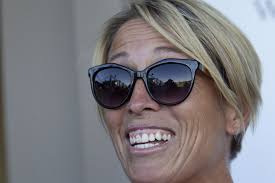 Kristen Buchanan is excited about the prospects of her three-year-old Eyewitness who debuts at this Wednesday’s Wyong meeting.

The Star Witness filly has been impressive in her three trials and Buchanan is keen to see how she can perform under race conditions.

“She’s a very nice filly and it’s great to finally be going to the races with her,” she said.

“She is still very immature but in my eyes she has a lot of ability.

“If she wins, I’ll probably tip her out. I think she has plenty of upside and I want to be patient with her.

“She is lightly framed and all legs, so she’s got plenty of growing still to come.”

Eyewitness had two nice trials in the winter before being spelled and resumed with a winning trial at Gosford on November 4.

“Her trials have been good but it’s different on race day in a more pressured situation,” Buchanan said.

“Her owners, who are new clients to the stable bred her, and are very excited to be going to the races for the first time.

“I’m confident she will race well for them.”

Eyewitness has drawn favourably in barrier two in the 1000m Maiden and will be ridden by Koby Jennings.

He also partners Buchanan’s other runners on the day, Upper East Side and Margie Bee.

Upper East Side resumes in the 1000m BM68 following a nice trial win at Gosford on November 4.

The Manhattan Rain four-year-old has clocked up five wins from his 18 starts, and Buchanan is hoping to add to that tally come Wednesday.

“This is a nice starting point for him,” she said.

“He’s been a tricky horse. He’s won five races, but he should have won a lot more.

“He’s matured a lot and this time around he will get the 1200m a bit more comfortably.

“Hopefully there will be enough speed in this race and that should stop him doing anything wrong.”

Buchanan is confident the addition of a Norton bit will help Margie Bee, who starts in the 1200m BM64.

“She won first up at Wyong but sometimes that’s not such a good thing.

“I think she is a genuine Benchmark 65 horse, so she has a win goes up in grade, carries weight, then we keep racing her in town to drop her benchmark back down and she wins again.

“That’s reality for her, she’s not a superstar but she will continue to win races on her terms.

“She’s been a little bit fierce in her racing, so the Norton has gone on in this race.

“I’m a bit tired of her going as hard as she can for as long as she can and then tiring.

“I’m hoping it will make a difference to her racing pattern. She will still be up there but just that notch off.”

The first of seven races, on day two of the Magic Millions Wyong Provincial Trainers Series, gets underway at 2pm.