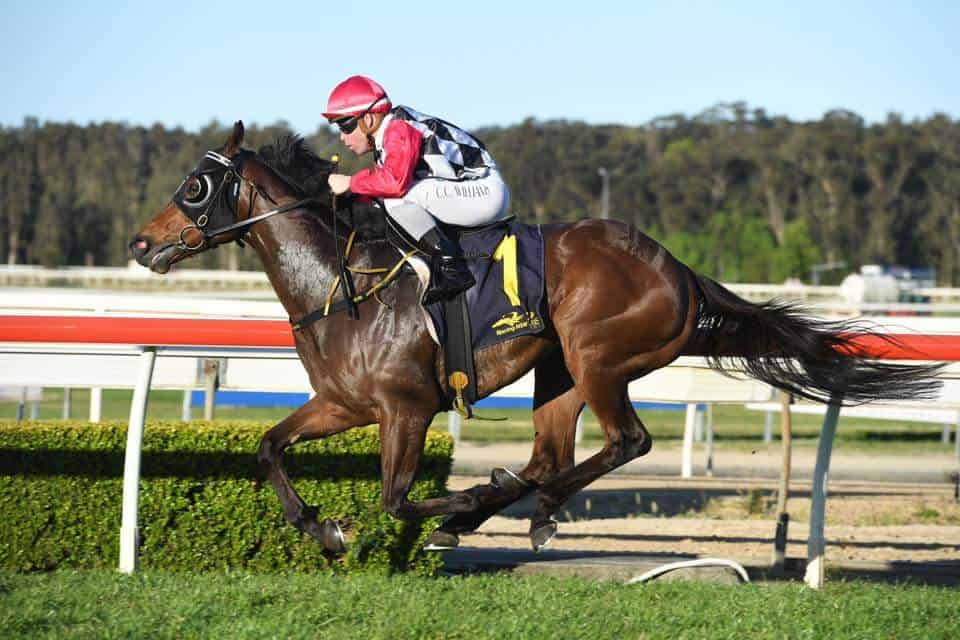 On a day celebrating Women in Racing it was fitting Wyong trainer Kristen Buchanan saddled up a home-track winner.

Some of racing’s female royalty were trackside including Sky Racing’s Lizzie Jelfs and Winks co-owner Debbie Kepitis, who were joined local trainers Kim Waugh and Buchanan.

The women, along with jockey Rachel King and Julianne Horsman from Racing NSW Media, gave an insight into racing through their different perspectives, entertaining a large crowd at the Trackside Marquee.

It was on the track that Buchanan’s ability to prepare horses shone through.

“It is great to get a winner any day but to have a win on a day celebrating the role women play in racing is pretty special,” she said.

In a good training performance, Buchanan’s Choisir gelding Traumatised put two lengths on his opposition to take out the BLITZ HOMES CONDITIONAL BM70 over 1000m.

The six-year-old, who was first up from a spell, showed an impressive turn of foot to bring up his fifth win.

“I’m very happy with him,” an excited Buchanan said. “I thought he was fantastic last preparation, I kept raising the bar and he kept finding.

“He had good form and I was surprised that he opened at the price that he did.

“I love this horse and I hate to say it that early in the day I told the owners I didn’t think he was going to make it. Horses make fools of you and I’m glad we were patient and he’s just kept improving.”

“It was a really good ride by Chris, he really listened to me. He’s got a 200m dash and you have to be patient.

“There was a lot of speed in that race and you could be tempted to chase but he was very patient and rode him confidently.

“I think he’s a really great apprentice on the up with a two kilo claim when you are really getting the ability of a senior rider.”

Another young female making her mark in the racing game, apprentice Cejay Graham, claimed victory in the BOB HOLLOWAY MEMORIAL on Soul Soldier for her bosses Peter and Paul Snowden.

In a second win for the stable on the day, the Written Tycoon colt was too strong for his opposition scoring a two and a quarter length win over the 1000m.

Graham came from behind on the three-year-old who stormed home over the top of his rivals.

“I’m so pleased to get another win on him,” she said. “He was the first horse I won on for the Snowdens and now he’s come back from a spell and I’ve been able to do it again.

“He travelled beautifully, and I was hands and heels most of the way. It was a good win.”

Colum McCullagh said it was a “terrific return” by Soul Soldier.

“His work has been really good and with his trial form it suggested he would go well today,” he said.

“Cejay has a good affiliation with him and it would be good if she could stay on him going forward.

“He has won two out of three starts and still has a lot to learn, so hopefully will be an even better horse in the future.”

Two impressive fillies fought out the finish of the KRISTEN BUCHANAN RACING F&M MAIDEN with the honours going to the Kris Lees trained Regimental Band ($1.55).

By I Am Invincible, the winner was resuming after finishing second at both starts in her first preparation.

She beat the Brad Widdup trained Akari ($8), who was caught wide for most of the race, with the Joe Pride’s Threeood ($14) third.

Regimental Band had trialled impressively at Newcastle on August 19 and looked sharp at a subsequent gallop between races.

Lees said he considered the filly had a “bright future.”

“It’s good to get the maiden out of the way. It was another lovely ride from Brenton (Avdulla), in that stalking position and she let down really well,” he said.

“She will certainly benefit from the run and I think she’s got a nice spring ahead of her.”

Avdulla was also impressed with the win.

“She’s lovely for sure. It was my first time sitting on her, but I’ve seen plenty of her.

“She trialled well with Louise (Day) and the gallop after was quite sharp.

“I wanted to be positive today. I felt in control a long way out and once the second horse got to her, she found another gear.”

It was the second leg of a winning double for the Lees/Avdulla combination scoring earlier in the day with Intimidating ($5.50).

The Sebring filly took out the SKY RACING C,G&E MAIDEN over 1100m by more than two lengths, to bring up his debut win at start two.

Classy stayer Miss Moana ($12) could be ready to claim more black type after her strong first up win over 1600m in the AFFORDABLE WARDROBES CENTRAL COAST CLASS 2.

The John Sargent trained mare, who was placed second in a Group 3 race at Adelaide in May, was resuming after trialling at Randwick on September 10.

Jockey Lee Magorrian, who has a good association with the four-year-old, came from the rear of the field to run down the leaders and claim a half-length victory.

Campbell Ashby, representing the Sargent stable, said it was a great first up performance over a mile with just one trial.

“We are highly delighted in that,” he said. “She’s in for a fruitful campaign.

“She’s got plenty of improvement in her. We took her to Adelaide last year and she finished second, but she’ll stay longer than the mother-in-law this one.”

“She’s gone well today, and it was a good training performance by John, fresh up over a mile with one trial.

It was a quinella for the Gerald Ryan stable in the 1350m DE BORTOLI MAIDEN with Zell ($6.50) a narrow winner over stablemate Highbury ($6).

Ryan said it was only circumstances that had led to the horses starting at Wyong.

“It’s quite funny because both horses are here by default really,” Ryan said.

“Zell was supposed to run on Friday at Newcastle, but the owner Neil Werrett had another runner in the race and didn’t want to go there.

“The other horse has been in twice and the meetings been called off. He is a horse that is looking for more ground, so it was a bit of a surprise to see him go so good over 1350m. I

“They are both two really nice colts, well-bred colts, both by I Am Invincible. They are still carrying a bit of weight and can improve off this.”

Zell was having his second start, coming off a fifth at Wyong on September 6 over 1200m.

Schemer ($5) from the Perry stable was third.

Famous could well live up to his name following a good win in the WISEBERRY HERITAGE REAL ESTATE Class 1 over 1350m.

The Medaglia d’Oro colt, bred by John Camilleri was a $750,000 yearling purchase, with John retaining a share in the promising three-year-old.

Trained by the Snowdens and ridden by Tim Clark, the Famous will now likely head to a metropolitan race after bringing up his second victory at start six.

Colum McCullagh, representing the Snowdens, was full of praise for the ride.

“Timmy gave him a beautiful ride from the inside gate. It was just nice to see everything work out and get another win for the James Harron crew.

“Barriers make a huge difference and drawing the one was a telling factor today. This horse has been a work in progress.

“He relaxed nicely and appreciated the speed today and I think that was key. “

McCullagh said he expected plenty of improvement in Famous.

“He’s bred to be strong late and now that he’s starting to relax, I think we will see the best of him this preparation.”

Magnificently ($5.50) trained by Clarry Connors, was a half-length behind in second, with the $2.45 favourite Darling Point, from the Widdup stable a close third.

Maybach, from the Waterhouse/Bott stable took out the first on the program, the 2100m EVENT CINEMAS TUGGERAH MAIDEN.

The More Than Ready gelding, a $1.3m yearling, looks set for bigger things following his two and a half-length victory.

With Adam Hyeronimous in the saddle, the four-year-old brought up his first win at his fifth start.

He was coming off a third at Kembla over 1600m on September 24 and appreciated the step up in distance.

He beat the $1.90 Lees trained favourite Urbino, with The Borough ($7) from the Perry stable, two lengths behind in third.