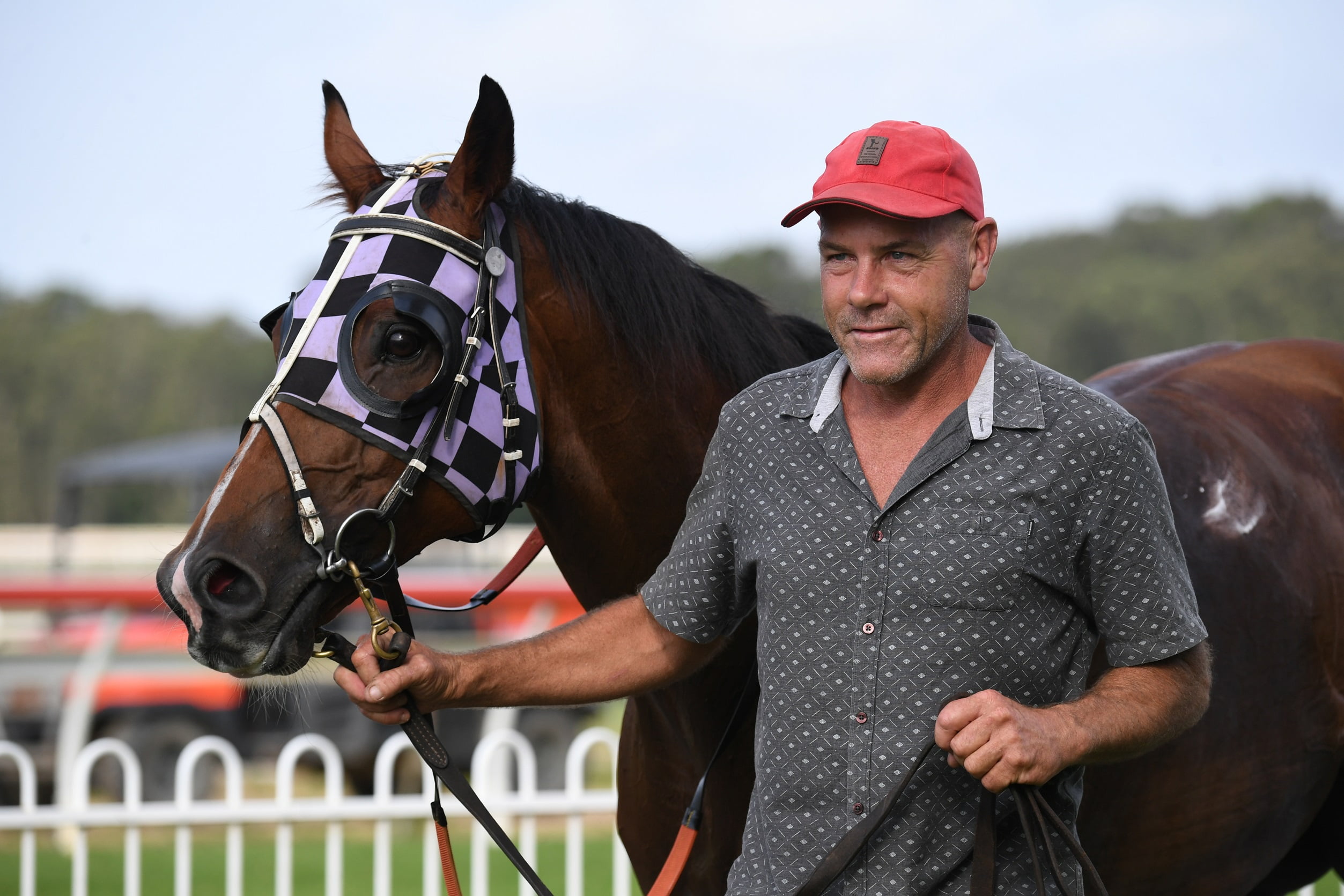 LEAD and win. That was the order of the day; pure and simple. Seven of the eight winners dictated terms on the fence and most were never seriously threatened. Lightly-raced youngster CONRAD showed the way by winning the opening race at only his second start, and is clearly headed for better things.

Wyong trainer Kim Waugh hopes to parlay today’s success into qualifying Great News at Gosford on Saturday in the third heat of the Provincial Championships for the $500,000 Final (1400m) at Royal Randwick on April 10.

As well as CONRAD, three horses to follow are MISS KONO, MOKULUA and TWITCH. MISS KONO was the sole winner not to lead and her performance suggested she can win again. MOKULUA, a beautifully-bred youngster, was making her debut and impressed with her solid second though no match for CONRAD.

TWITCH also was making her debut and after beginning slowly and then being bumped heavily by another runner just after the start, raced keenly as she made ground and was game in finishing second to odds-on favorite RUSSBUSS. Brenton Avdulla took the riding honours with a double.

IF there was any doubt about CONRAD’S luckless debut second at Canterbury recently, the promising youngster quickly dispelled that with an authoritative breakthrough as a $1.45 hotpot, leaving his rivals with no excuses.

A son of Maurice, he was pressured early by several runners but showed his ability by bounding clear to win easily from MOKULUA ($17) and another son of the winner’s sire, MAURICE’S MEDAD ($16). Wyong trainer Kim Waugh and jockey James McDonald not surprisingly have a good opinion of CONRAD.

“We bred him, and he is a nice horse to train; very sensible,” Waugh said. “James likes him and that’s very exciting.” McDonald afterwards said CONRAD was “sure to go on to better things”.

Provided he does well after today’s outing, CONRAD will be given another start before a break.

Though beaten easily, beautifully bred runner-up MOKULUA ran really well and should not be long shedding her maiden status. A daughter of the renowned sire Redoute’s Choice, she is the third foal of the 2012 Group 1 VRC Oaks (2500m) winner and 2013 Caulfield Cup (2400m) placegetter Dear Demi.

SCONE’S Reece Jones is leading the NSW apprentices’ premiership – and it’s easy to see why.

He won his first metropolitan race at Warwick Farm last Wednesday, landed a Country Championships Qualifier for his master Rod Northam on Spiranac at Tamworth last Sunday and gave a polished display to lead throughout in this race on the pacy MADDISON’S MISSILE ($4.20).

Giving leading Hawkesbury trainer Brad Widdup his 20th winner of the season, the lightly-raced three-year-old daughter of The Factor put the outcome beyond when she burnt through after beginning awkwardly and led easily after only 100m. The addition of blinkers certainly did the trick and, having only her third start, she was always in control and won by nearly four lengths from $101 outsider THE PETTI EXPRESS.

“She had no luck at all first-up at Goulburn and should have gone close to winning,” Widdup said. “I was confident she would be hard to beat.” The $2 favorite ACCELERANT had to race wide throughout and it was obvious on the home turn he would be struggling to overhaul the leader, but battled on gamely to finish third. Jockey Sam Clipperton escaped injury when the runner-up’s stablemate GRAND PALAZZO ($7.50) reared and dislodged him on jumping away. ELUSIVE BIRDIE ($10) pulled up 2/5 lame in the off foreleg, and a vet clearance will be required before trialling or racing again.

LAST Saturday’s victorious Group 1 Randwick Guineas jockey Brenton Avdulla noted the first two winners led throughout and adopted similar tactics on SPIRITUALITY ($3.20) – and the race was over a long way out.

“She was coming back from two good city runs and this was a pretty weak provincial Maiden,” Avdulla said. “I knew it would be advantageous to go to the front.”

Winning co-trainer Gerald Ryan was surprised his Spirit Of Boom filly had taken seven starts to break through, and was understandably pleased to see her finally get the job done.

“I thought she might sit outside the leader, but Brenton grabbed the race by the scruff of the neck after she began a bit awkwardly,” he said. “She worked with Bottega (Group 3 Newcastle Newmarket runner-up) the other morning and he couldn’t get past her. I’m not saying she is in that class, but that should give her confidence and she should be able to win another one.” SPIRITUALITY fetched $80,000 at the 2019 Inglis Premier yearling sale in Melbourne.

Runner-up EARL OF SANDWICH ($3.60) was resuming and tried hard to match the winner in the straight. He is going to improve as local trainer Kristen Buchanan lifts him in distance. The first pair had the race to themselves with third placegetter AUNT BELLE ($71) belying her odds, though beaten easily. CANTRELL ($6) was 3/5 lame in the off foreleg when examined after the race and a vet clearance will be required before he is permitted to trial or race again.

“She is still very raw, and threw away the race here the other day, but hugged the rail today,” Parr added. “She is a nice filly who is progressing.”

A three-year-old daughter of Dream Ahead, RUSSBUSS drew the rails and drove through to quickly assume the lead, this time giving no indication of being wayward.

Well-backed first starter TWITCH ($3.70) wasn’t so flash at the start but then showed pace to sit behind the winner and got out in plenty of time on straightening, but couldn’t pick up RUSSBUSS, who was racing for only the fifth time.

PHASES ($10) was 2/5 lame in the off foreleg after pulling up and trainer Tracey Bartley told stewards the colt would be gelded and spelled.

THIS race ended the trend of winners leading throughout. Nonetheless, there was enough pace on to enable the improving MISS KONO to overpower her rivals.

The Newcastle filly didn’t step brilliantly, but it didn’t matter as the solidly supported PICK THE SCORE ($4.60), GENKIDES ($3.10 favorite) and DOZER BAY ($7.50) all went lickety split trying to get to the front.

PICK THE SCORE eventually led before DOZER BAY took over. Despite making the home turn awkwardly, MISS KONO (Christian Reith) showed a nice turn of foot once she balanced up and burst down the outside to beat PICK THE SCORE and GENKIDES.

Who says you have to spend a lot of money to pick up a nice horse? MISS KONO, a daughter of Star Witness, cost only $5000 as a yearling at Scone in 2019. By contrast, the now Coffs Harbour-trained WILD WIND ($11), who ran fifth of six, was a $600,000 purchase the same year at the Inglis Australian Easter yearling sale.

Winning trainer Rod Ollerton saw only positives in his filly’s victory. “She has natural pace which won her first race, but she is now showing she can sit behind and be strong to the line.”

MISS KONO in the previous race might have bucked the trend of winners leading, but “normal service” resumed here.

Cessnock trainer Jeremy Sylvester has done a terrific job with IF YOU THINK SO (Kathy O’Hara), the four-year-old daughter of dual Cox Plate winner So You Think.

Since she was switched last year from Warwick Farm trainer Gary Portelli, Sylvester has given her 11 starts for three wins and four placings.

“IF YOU THINK SO wasn’t up to city standard, and Gary sent her to me in good order to try to win some races in the country and hopefully a TAB Highway (which she did on January 30 at Rosehill Gardens),” Sylvester said. “Kathy has formed a good association with her and leading on her seems to be the key. IF YOU THINK SO is better in the wet, but can handle any type of ground.” Sylvester says his mare has a nice environment at home and often works through the bush.

IF YOU THINK SO ($4.20) was never seriously threatened in leading throughout to defeat RENALOT ($11) and CASINO MONDIAL ($6). THE MEDIATOR started a $2.70 favorite but covered ground and was never a serious winning prospect. Stewards queried rider Robbie Dolan, who said the colt raced flat and finished off only fairly.

O’Hara praised Sylvester for his work with IF YOU THINK SO.

“She is not without her quirks,” she said. “You have to go with her and keep her as happy as you can. When she’s happy, we’re all happy.”

A post-race vet examination revealed SKY DIAMONDS ($5) to be 2/5 lame in the off foreleg, and stewards require a vet clearance before trialling or racing again.

Same story here, though even better as the remarkable 10-year-old ISORICH won his 15th race – and seven of them have been on his home track – at his 128th start for local trainer Wayne Seelin, who deserves great credit for the manner in which he has managed the veteran’s career.

Jockey Sam Clipperton bounced back from a mishap earlier in the day when dislodged from his mount just after the start of the second race, and took full advantage of the gelding’s inside draw to dictate terms.

“He is a course specialist and had the conditions to suit today,” he said. “I held the front because leaders have been winning most of the day. The 1350m is probably as far as he wants to go, but he travelled strongly and was tough.”

ISORICH ($6.50) battled for the lead early with eventual third placegetter SAFARIS ($5.50), but once he assumed control was never really threatened. BUZZ ($17), who also races well at Wyong, ran home strongly to grab second placing and looks to be nearing another win.

Yet another front-runner demolished his rivals. Returning as a gelding, Newcastle three-year-old MIDLAND ($2.60 favorite) had no trouble returning to the winning list; his cause enhanced when a number of strong chances dropped out before the 7.30am scratching deadline.

Wearing the colours of the famed New Zealand breeding farm Waikato Stud, rider Brenton Avdulla clinched a double, having won earlier on SPIRITUALITY. “I put the foot to the floor to lead, and he gave a good kick on the bend,” Avdulla said afterwards. MIDLAND indeed gave a good kick, racing clear to score by more than three lengths from AUSTEJA ($6) and TIMPERLEY ($8). ENAMOUR ($12) was 2/5 lame in the off hind leg after the race, and cannot trial or race again until a vet cleara