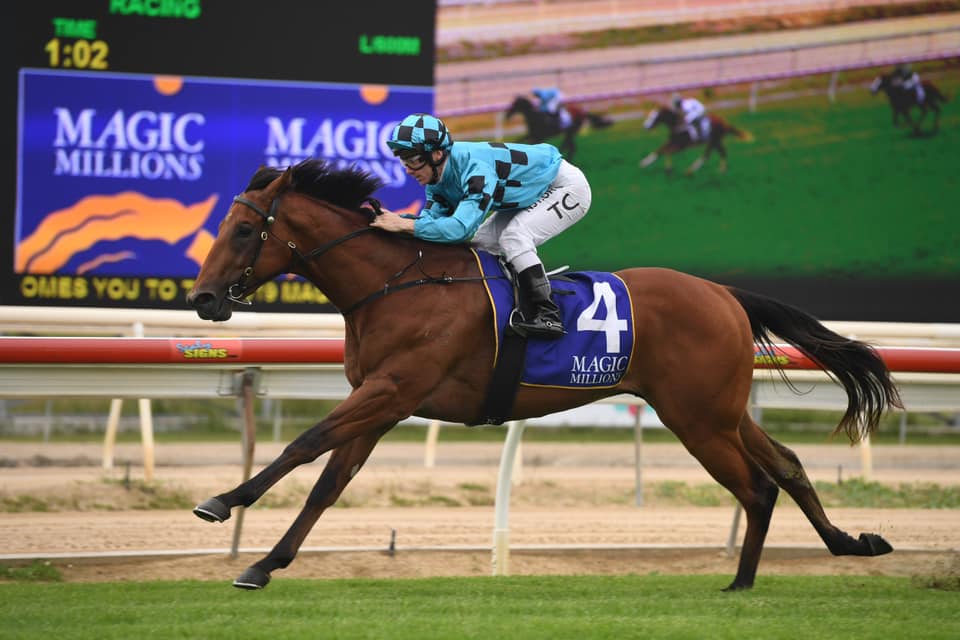 Command Approval and Speak Now could continue the Waterhouse/Bott stables dominance of the Magic Millions Wyong 2YO Classic on Wednesday.

The pair are among 21 nominations for the $200,000 race, which includes four interstate raiders.

The Waterhouse/Bott stable has five 2YO Classics to its name, the latest Farnan (pictured) in 2019.

A $170,000 Magic Millions yearling, Command Approval is following the same path as Farnan, who debuted with a Canberra win before claiming the Wyong 2YO feature.

A Spirit Of Boom colt, Command Approval looked strong taking out the 2YO Maiden over 1000m at Canberra on November 26, beating stablemate Speak Now.

Mornington trainer Clayton Douglas has Epic Centre nominated, the Starspangledbanner colt coming off a third in the Magic Millions 2YO Classic at Ballarat on November 20. Fellow Victorian Archie Alexander has nominated Kumicho, who was fifth in the Listed Merson Stakes at Flemington on November 27.

Gold Coast based Michael Kosta’s Perfect Mission is among the nominations, the filly placed second on debut at the Sunshine Coast on December 3, while Better Golightly, trained at Eagle Farm by Danny Bougoure, looked impressive winning two trials.

Local trainers could be represented with Tracey Bartley’s Impounded and Damien Lane’s Wealthy Investor, who was third on debut at Rosehill, nominated.

Lane has Compassionate among the 15 nominations for the $100,000 Magic Millions 3YO & 4YO Stakes, while the Bartley trained Empowerment and Compassionate, Kristen Buchanan’s Oakfield Arrow and Brett Partelle’s Skye Banner, could see a number of local runners in the field.

Last year’s $2million Magic Millions 2YO Classic winner and Golden Slipper runner-up Away Game, from the Maher/Eustace stable is among those nominated, the Snitzel mare having already amassed over $3m in prizemoney from five wins and seven placings off her 18 starts.

Nominations for several races on the program have been extended, with final fields for the seven-race program on Monday.