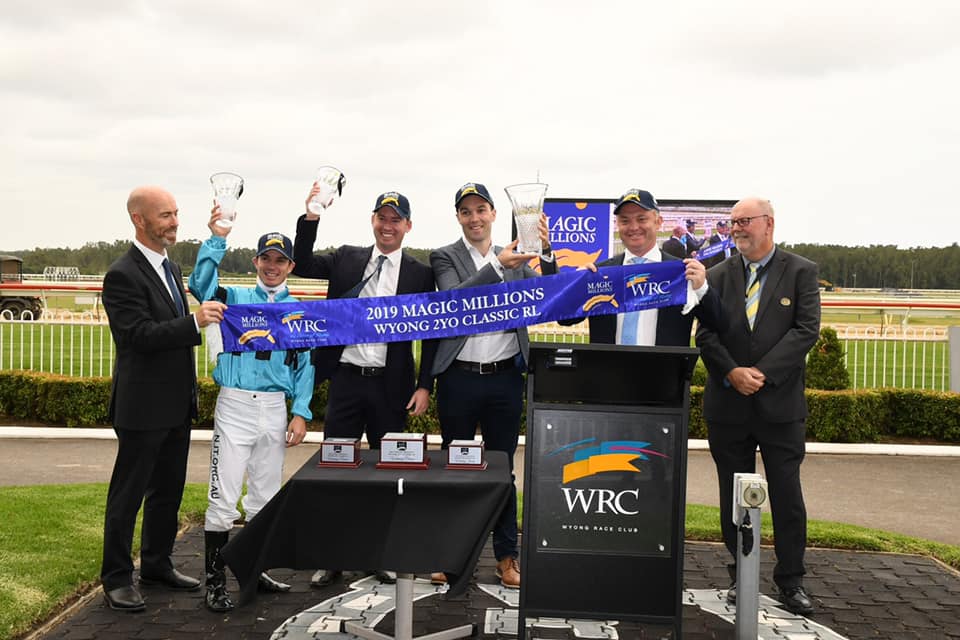 Click Here for today’s racebook. The Magic Millions Wyong 2YO Classic has attracted a strong field with local trainer Damien Lane under no illusions his colt Wealthy Investor will have to bring his A game to claim victory.

The Waterhouse/Bott stable, who has dominated the race in previous years with five wins, saddle up two runners last start Canberra winner Command Approved and Speak Now, who was second in the same race.

Their last winner came with Farnan in 2019 (pictured), who went on to take out the Golden Slipper the following year.

Annabel Neasham also has a two-pronged attack on Wednesday with debutantes Soaring Ambition and Man In The Mirror, while the Maher/Eustace stable will start Fly Nice, an Impending filly who was unplaced in the Magic Millions Ballarat 2Y0 Classic on November 20.

Lane’s Wealthy Investor is one of two locals in the field of 14, with Tracey Bartley running first starter Impounded, as they vie to become the first Wyong trainer to win the Classic.

“I think he’s a nice horse and he has improved off his last start at Rosehill,” Lane said. “I’m expecting him to run really well.”

A $75,000 yearling, Wealthy Investor debuted at Rosehill on November 27, finishing third on a very heavy track.

“I’d only given him one soft trial leading into that race, so he was always going to improve off that.

“Ideally, I think he would be suited by a bigger track than Wyong and maybe 1200m, but you have to have a go at these sorts of races when you are eligible.

“He has drawn really nicely in three which will help and I’m confident he will run well.”

Lane has engaged Josh Parr to partner Wealthy Investor, while Digger McLellan will ride Impact Star, his runner in the Magic Millions 3YO and 4YO Stakes.

“It’s good to have runners in both feature races and I expect Impact Star to also go well.

“He hasn’t had a lot of luck in his last couple of runs and I think the small field will suit him.”

The Star Turn three-year-old, raced by Impact Racing, the same connections as Wealthy Investor, has had nine starts for two wins and two placings.

He is one of eight acceptances in the field, two of which Empowerment and Compassionate, are from the Bartley stable.

The Waterhouse/Bott stable has a smart runner in early favourite Snitzonfire, who strung together three successive wins last preparation, while Matthew Dunn’s Head Legislator has had two wins and six minor placing from his 10 starts.

The first of seven races gets underway at 1.45pm.