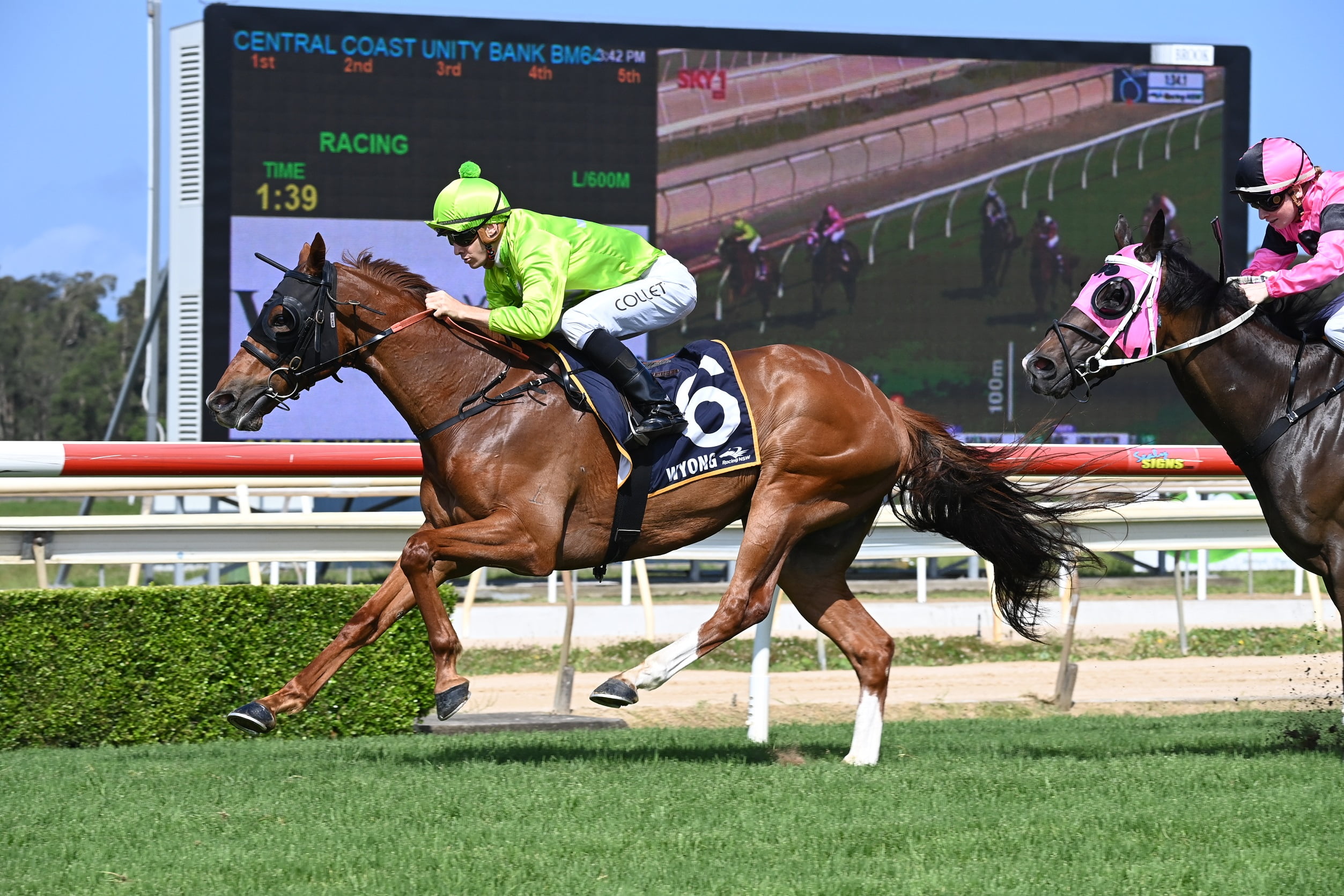 A double to jockey Tommy Berry and a local winner were among the highlights of the Business Wyong Race Day.

Berry, who was favourite in the jockey’s challenge, partnered On Bail for the Snowden’s and promising filly Petulant for the Hawkes stable.

Allan Kehoe’s Schoona The Better (pictured) continued a good run for the stable, bringing up his fourth career win.

The Redoute’s Choice gelding, a $1,075,000 Magic Millions yearling, had been placed in all four previous starts, three of those at Wyong.

Moore had urged Tim Clark to be positive from the start and that’s how it panned out with the four-year-old pinging the gates and leading.

Clark was able to dictate terms throughout and despite a couple of nervous moments before the turn, when he was pressured by runner-up Military Star, the result was never in doubt.

Stay Wealthy pulled away in the final stages to win by three and a half lengths.

“He’s been a pleasure to train,” Moore, who races the gelding in partnership with Newhaven Park, said.

“He’s got a big heart and had been beaten by a couple of handy horses in his previous starts but he’s very consistent and came here today with his best chance to win a race.”

A gun ride by Tommy Berry secured a debut win for On Bail who outstayed his rivals in a grinding victory.

Berry wasn’t content with the mid-race tempo, taking On Bail from last at the 1200m mark to just off the leader Conference.

He hit the front on straightening, holding out the fast-finishing Ironic Miss to post a one length victory.

“The ride won the race,” Snowden’s racing manager Colm McCullough said. “Tommy elected to get up on the speed and take any bad luck out of it. He was always going to be good when he got over a trip and it was great to see him strong to the line.

“It will be interesting to see how he goes as we step him up further.”

On Bail ($5.50), a Turn Me Loose gelding, was having his seventh career start, having finished fourth at Gosford over 1900m on November 20.

Ironic Miss ($6) trained by Rodney Ollerton was second, with Conference ($6.50) from the Gary Nickson stable, third. The $1.90 favourite Lady Redwood appeared to have every chance, finishing fourth.

The well supported Caboteur went one better than his last start second at Canterbury to claim his first victory and looks set for better races.

The David Payne stable has always had an opinion of the son of, So You Think, who had two Metropolitan placings from his four starts.

“He’s got it all ahead of him, we are in no hurry, and that’s why we have been a bit patient with him,” Payne said.

Caboteur was backed in late, starting $2.25 favourite, with punters confident he would handle both the track and heavy conditions.

He didn’t disappoint and looked the winner a long way from home despite a challenge from runner-up Ba Ai Gei Ni.

It was a pickup ride for Josh Parr after Keagan Latham was unavailable and Payne couldn’t have found a better substitute with Parr a pro around Wyong.

He got an easy run in front with Parr able to dictate terms and pull away in the final stages to win by a length.

The victory denied Snowden’s and Tommy Berry of a race to race double, with Ba Ai Gei Ni ($4) second, over Perfect Match ($31) from the Gary Moore stable.

A home track win for the Allan Kehoe trained Schoona The Better who brought up his fourth career victory courtesy of a tactical ride by Jason Collett.

There were a few nervous moments for Kehoe, who hadn’t expected the gelding to lead.

But Collett was able to dictate terms throughout, after taking the five-year-old to an easy lead, backing off the tempo in the middle stages.

The tactic proved a winner with Schoona The Better able to kick in the straight.

Tommy Berry had to press forward on the $2 favourite Lord Winston in the early stages after being caught three wide, with the Lees trained gelding tiring late to finish fourth.

All honours were with the winner, who despite coming off a Tamworth victory and third at Goulburn this preparation, was sent out $10.

The five-year-old, by Pellizotti, has really hit his straps in the middle-distance races, all four wins from his 14 starts coming from 1400m at beyond.

“He’s never led before, so I was a bit worried, but they went slow, and it suited him today and showed his versatility,” Kehoe said.

“I’ve always liked this horse, but he’s been a work in progress. He gives me the feeling he’s going to go on and win quite a few races but he’s still learning to be a racehorse. I’ll probably put him over 1800m next start.”

Bak Da Man ($3.10) from the Nathan Doyle stable, was runner up after going astray on the turn, and could be the one to follow. Departing Bullet ($10) trained by Paul Niceforo was third.

The Hawkes trained Petulant was able to justify her short price with a dominant win in just her second career start.

A Starspangledbanner filly out of a Denman mare, Petulant was coming off a second at Hawkesbury on debut when she was just run down on the line.

Tommy Berry took a sit behind Kristen Buchanan’s speedster One Way Street and was able to overhaul the leader in the final stages to win by a length.

The promising three-year-old could be headed for better races on the strength of her win.

Petulant was the recipient of strong support, starting $1.90, the win bringing up a double for Berry.

Wyong horses featured heavily in the first four with One Way Street, who looks close to a win the runner-up, over Kim Waugh’s Foolish, with the Allan Denham first starter Alucia ($10) fourth.

Veteran Muswellbrook trainer Pat Farrell was in the winner’s circle with his speedy gelding Bengalla Bay proving too quick for his opposition over the 1000m.

The Wandjina five-year-old had been placed fourth in stronger company at Taree on November 21 but wasn’t to be denied at Wyong leading all the way.

Alysha Collett gave the flying Bengalla Bay plenty of rein and he scooted away to lead throughout, tiring in the final stages but holding on to win.

South Coast visitor River Mac ($6) dived on the line but was beaten a neck, with a much-improved performance by the Brett Partelle trained Trust Me ($12) to finish third.

The winner has been in good form this preparation, figuring in the finish in most of his seven starts.

Bengalla Bay landed some good bets after starting $3.40 second favourite and has now had five wins and 11 placings from his 40 starts.

In a busy four-way finish the Jason Coyle trained Hasty Duchess was able to snatch victory on the line.

The mare, by Hallowed Crown, was resuming after three trials. She looks to have regained the form of her first preparation, where she had a win and second from three starts.

She resumed from a spell with a fourth at Canberra in March this year but was then spelled again, before returning with the three trials.

Coyle had her primed for a strong first up performance and the four-year-old didn’t disappoint, coming from behind to hit the front on the line. Starting at $5.50, Hasty Duchess was ridden by Jess Taylor.

The Chosen One ($4.80), having his first start for Damien Lane, was slow to jump and looked to have the race won before being swamped on the line, with a win not far off.

The Kearney trained Carlisle Bay ($5.50), who was also doing his best work on the line, was third.