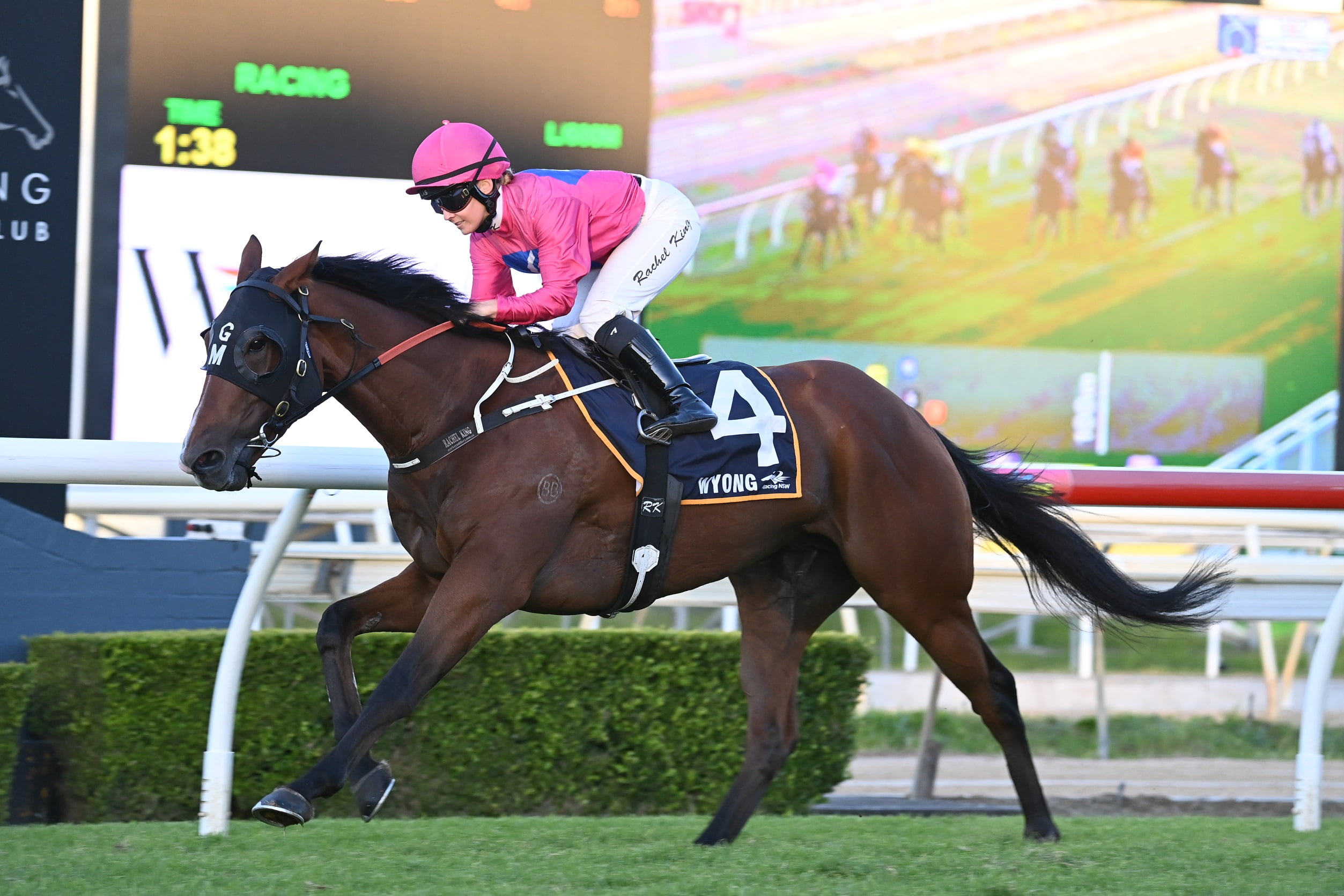 A strong meeting on an improving track, produced some impressive wins including the South Australian Derby bound Bastida.

John Sargent’s three-year-old colt looks set for bigger things after dominating his rivals over the 2100m.

Gwenda Markwell had a successful trip north returning home to Kembla with two winners, Mentalism and Highballer, while Brenton Avdulla took out the riding honours with a double.

After the meeting was in some doubt early following heavy rain, the track improved from a 10 to a heavy 8, earning the praise of participants.

John Sargent’s Bastida stamped his credentials as both a stayer and mudlark with a strong win in the opening race over 2100m.

And the stable has big plans for the gelding planning to target black type staying races.

“The penny has dropped, and we have a couple of nice races planned for him at Flemington on Anzac Day and the South Australian Derby. He loves the soft tracks, so that’s a bonus,” stable representative Campbell Ashby said.

“It was a race in two here today and he was always going to be able to outstay them.”

The Pierro three-year-old brought up his second victory in as many starts, coming off a Goulburn victory over the same distance on March 18.

The win had come on a soft track and a previous second at Newcastle in the heavy, gave punters the confidence to send him out $2 favourite.

Tim Clark stalked the John Cooper trained Arabolini ($2.80), in his customary role as leader, before hitting the front on straightening and drawing way to win by more than a length.

It was a pick-up ride for Clark, replacing his brother-in-law, Josh Parr.

The outsider of the small field, the Perry trained Into The Oblivion ($14) was third, more than seven lengths behind the winner.

The Dissident gelding, having his fourth career start, was coming off a third at Scone on March 16 over the same distance and track conditions.

Pike was able to position the three-year-old in the box seat just behind the barriers after a good start.

He got to the centre of the track on straightening and was able to hold off his rivals to win by a length and a half.

Duke Of Gordon was an $80,000 Karaka yearling, by a Giant’s Causeway mare.

Taree galloper Preferred Choice ($31), trained by Mark Stewart, battled on well for second, over Gwenda Markwell’s Blackall ($4.20), who looked like the one to follow.

There were excuses for the Hawkes trained Poetic Drama ($2.90) who had to work hard in the early stages when planted three and finished fourth.

Annabel Neasham’s good opinion of Diamond City ($2.40fav) was franked with a strong debut win over the 1000m.

It was a race in one after Brenton Avdulla led throughout to win by almost three lengths.

The filly finished third in a three-way photo at Newcastle when resuming on a heavy track on March 31.

Neasham had been impressed with the run giving her confidence heading into the Wyong race, and she wasn’t disappointed with the win never appearing in doubt with Avdulla’s positive ride.

“I’ve always had a lot of time for her,” Neasham said. “It was a good tough run that day at Newcastle in quite testing conditions.

“I was confident today in a small field Brenton would take luck out the equation and she’d be hard to beat.”

There were no excuses for the beaten brigade with Ron Quinton’s Light Press ($8.50) and Damien Lane’s Red Cobra ($7.50) filling the minor placings.

Diamond City, by Ilovethiscity out of a Danerich mare, was a $120,000 yearling purchase at the Inglis Melbourne Yearling sale.

An ultimatum by Mark Newnham paid dividends with his Capitalist colt Mission Value breaking through for his first win at start three.

Newnham had been disappointed with Mission Value’s last outing when resuming at Warwick Farm, finishing ninth over the 1100m some 10 lengths off the winner.

He had debuted with a third in stronger company in the Listed Inglis Nursery in December 2020 before a lengthy spell.

Newnham had planned to geld Mission Value if he failed to produce at Wyong, with that procedure now likely on hold.

“He just didn’t seem to take much interest at Warwick Farm and was never in the race,” he said.

“He had a fair bit of work and a jump out since then, so I thought it was time he showed us what he’s got.”

The Capitalist colt, a $70,000 yearling, drifted considerably in betting, starting at $10 after earlier being half those odds.

Tyler Schiller pinched the win with a good kick on the turn and was able to hold out the fast-finishing Hawkes debutant Airraid ($3.40).

John Steinmetz’s Khumbu ($7) was third after earning late support, with both the minor placegetters not far off a win.

The $2.15 favourite Island Lass was caught wide early and failed to run on.

Antonio Giovanni showed his class to take out the 1300m Maiden but had to fight hard on the line to win by the narrowest of margins.

Kim Waugh’s Oxford Vison seemed to have the race won before Antonio Giovanni dived at the line late, with the judge required the separate the pair.

Chris Waller’s All Too Hard colt got the nod, bringing up his first win at start six, in his first run for the stable.

He was sent out $1.75 favourite, after having competed in two Victorian Group races in the spring.

He looked primed for a good first up run with two good trials leading up Wyong race, the colt closing off nicely in both.

Brenton Avdulla, who brought up a double, settled him just behind the lead pair throughout, coming with a sustained run in the straight to snatch victory on the line.

Oxford Vision ($2.20) has now had three seconds and a third from four runs and deserves a win, while Sir Savaluca ($11) from the Pride stable, battled on for third.

Impending father Keegan Latham believes there could be more wins in store for Mentalism after the gelding notched up his second victory.

Latham’s partner was expected to give birth on Friday and the jockey was excited to ride a winner on the eve of the arrival of his first child.

He was impressed by the improvement in the Gwenda Markwell trained Mentalism ($9), who has partnered in four of his five runs this preparation.

“He’s turned the corner quick and has been very consistent in his runs and improved a lot,” Latham said. “I’ve been looking forward to the 1300m today because I believe he is better suited over more ground.

“He was a bit keen early in his career and that’s why they kept running him over shorter trips.

“He’s really learned his trade well now, you can see by the way he won today and hopefully there are more wins to come.”

It was a good ride by Latham, who had to weave a passage in the straight before getting the spilt and racing through to win by a length and a half.

Wild Chap, trained by Brett Lazzarini ($11) was the runner-up and looks close to a win, while Godolphin’s $3.20 favourite Brillar, was third and looked to have every chance.

The Joe Pride trained Coal Crusher ($2.90fav) looks set for a good preparation on the strength of his first up win.

It was the third race victory for the super consistent son of Turffontein from nine starts, including five seconds.

Pride had expected Coal Crusher to sprint well first up and Glynn Schofield gave him the perfect ride off the pace, before finding a gap in the straight and speeding away for a convincing win.

“He’s a nice horse with a good future,” Pride said. “He’s not a 1000m horse but I was happy to see him finish off strongly with 61.5kg on his back. He’s in for a good preparation.”

It was an emotional victory for Pride with his son Brave on strapping duties for the first time.

“I strapped my first Group 1 winner 21 years ago to the day,” he said. “It’s great to Brave get his first winner today.”

It was a real Pride family affair with Joe’s wife Kylie sharing ownership of the four-year-old.

Runner-up Suprina, from the Jarrod Austin stable, was attempting to bring up her fourth successive win which won’t be far off, while Charlie Porter’s Mr Polar ($20) put in a strong performance, coming from the rear of the field to finish third.

A double to Gwenda Markwell and well-deserved victory to Highballer ($2.80fav), the four-year-old placed in four of his previous five starts this preparation.

The ultra-consistent son of Teofilo was given a great ride by Rachel King, who had him positioned just behind the leader.

He hit the front on straightening and then the result was never in doubt, drawing away to win by more than a length.

King was impressed with the victory.

“He’s been really consistent, and I was able to get a nice run on speed today,” she said. “It was a nice tempo for him, and he let down really well late.

“He races well on this track and did a great job.”

Highballer was coming off a second at Goulburn last start over the 1600m, beaten less than a length and punters kept the faith sending him out favourite.

He beat the Snowden trained Vigorous Flow ($4.80), who was doing his best work late, with a much-improved performance by Tracey Bartley’s Kaaydeh ($81) for third.