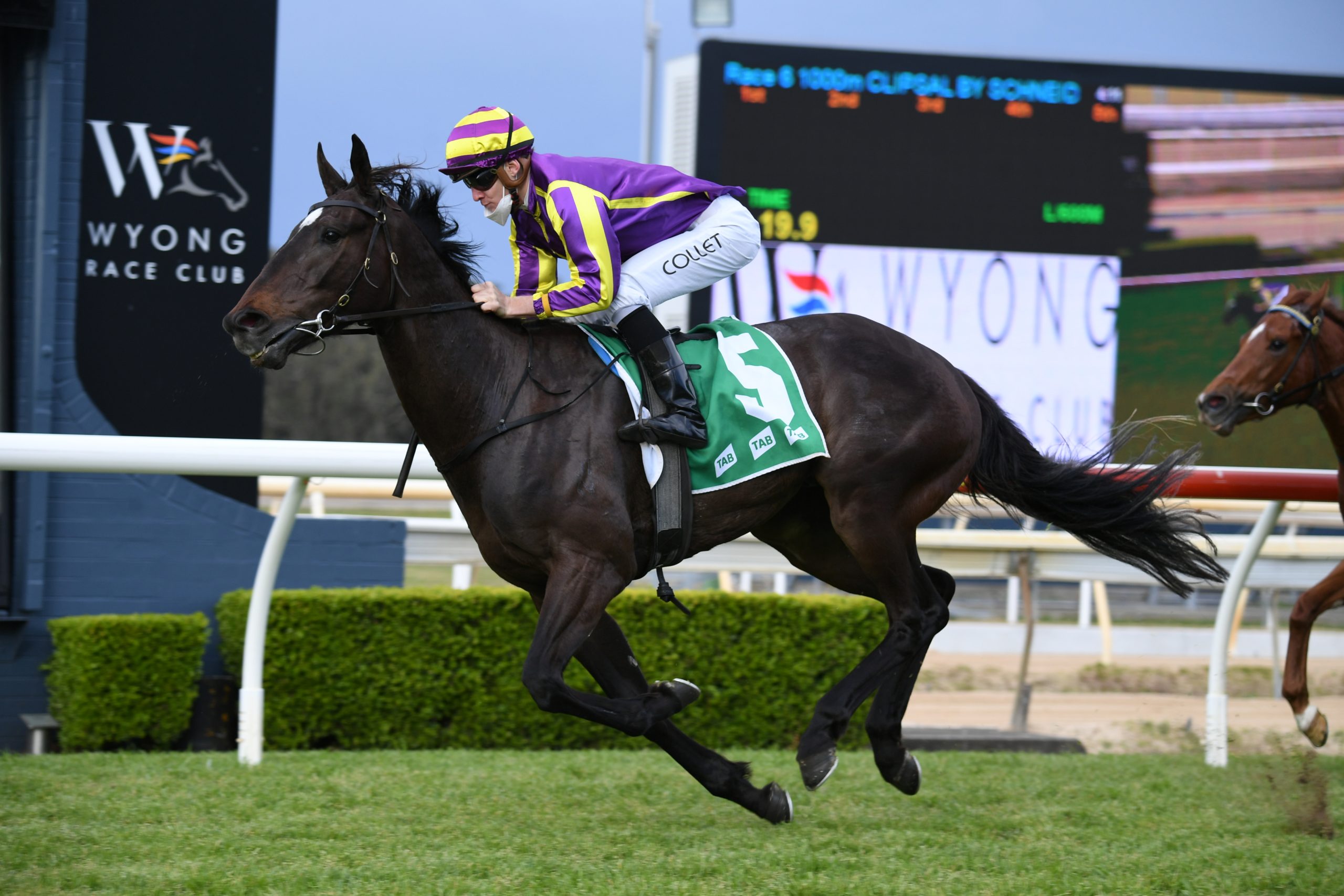 Favourites dominated the program, taking out five of the eight races, while Tim Clark and Jason Collett shared the riding honours, both claiming a double.

A berth in the Group 1 Spring Champion Stakes could be on the cards for Raging Bull following his dominant staying performance.

The Bull Point gelding was sent out $1.24 favourite and didn’t disappoint winning by more than three lengths.

Tim Clark opted to take the sit just off the leader before hitting the front on straightening and drawing away in the final stages.

Trainer David Payne had expected the three-year-old to perform well, having already targeted the Spring Stakes over 2000m at Randwick on October 9.

“He was way too good this afternoon. When he came past the post the first time, I had the feeling it was race over.”

Clark agreed it was a strong win.

“He looked well suited in this race and David spoke highly of him as a staying prospect,” Clark said.

“It was his first time over the trip. He was well suited and showed his dominance.”

Raging Bull was placed twice at Metropolitan level as a two-year-old, before given a freshen up prior to the Wyong start.

So Incisive ($8) trained by Clarry Connors was runner-up, ahead of the Nathan Doyle trained Kintos ($41).

The Anthony Cummings trained Lease hit back from a disappointing last start Hawkesbury run to bring up his debut win at start six.

The Choisir colt was beaten more than 20 lengths when first up over 1100m at Hawkesbury on September 9.

He was able to atone for that performance with a good win, aided by a great Josh Parr ride.

Leased met with late support in the betting starting at $8.50.

Parr said he had been confident the three-year-old would win from a long way out.

“He floated his way to the start but appreciated a squeeze out of the gates and got up and travelling,” he said.

“I was quite confident a long way from home.”

A $75,000 Magic Millions yearling, Leased beat the fast finishing How Do You Sleep ($6) from the Joe Pride stable, with the Waller trained Hollywood North ($6.50), third.

The short priced favourite Island Legend, from the Ryan/Alexiou yard, appeared to have every opportunity, finishing third.

Bjorn Baker’s debutant Battleton ($2.60) looks to have a bright future on the strength of his come from behind win over the 1100m.

The race plan had been to sit just off the pace, but a slow start saw the three-year-old settle at the rear of the field.

Jason Collett didn’t panic, getting Battleton into a rhythm before circling the field on the turn and running down the leaders to win by a long neck.

“It was a good start to his career,” Collett said.

“He did a lot wrong. I was hoping to be close to the lead, but he was slow away and over raced early.

“He’s obviously got ability to be able to rail out three and come around them like that.

“He’s got a bit of growing up to do upstairs but to do what he did today and win like that is promising.”

Legend I Am ($7) trained by Les Bridge, was a length behind in third.

Promising four-year-old Ma And Pa brought up back to wins courtesy of a well rated Nash Rawiller ride.
The Redoute’s Choice gelding out of Oaks winning mare Dear Demi, was sent out $1.60 favourite on the strength of his last start Hawkesbury win.

Rawiller took Ma and Pa to an early lead and dictated terms in front.

He led into the straight and looked to have the race won but had to dig deep in the final stages after a late challenge by the second favourite The Denzel ($2.90).

“He gave me a nice feel,” Rawiller said. “He just tended to track a bit funny around the corner.

“He felt vulnerable about 100m out but dug in to win.

“He is still quite raw and green but did a good job and will get over further for sure.”

Clare Hewson, representing the Waller stable, said she expected they would now target a metropolitan race with Ma And Pa.

“He’s heading in the right direction, and I’d say we will go to town next. It was a good win today and a lovely ride.”

Ma And Pa is bred and is raced by John Singleton.

It was the third successive second for Les Bridges’ The Denzel, with The Mediator ($17) trained by Mark Newnham, third.

Capitalist filly Shihonka was a class above her rivals scoring an impressive six length win as she heads to town for black type races.

Tim Clark brought up a winning double on the three-year-old, who was resuming from a spell.

She finished third in the Listed Woodlands in May and looked to have returned in great style winning a trial at Gosford on August 30.

She was sent out $1.12 favourite and the win never looked in doubt after Clark was able to cross from the wide barrier and lead throughout.

She hit her straps in the straight pulling away from her rivals and easing down on the line.

Neil Paine, representing the Waterhouse/Bott stable, said it is likely they will target black type races.

“It was terrific and great to get that first win off her back,” he said.

“I think she will progress from here and Gai and Adrian will have a look and see what is for her over the carnival.

“She’s already stakes placed and if she can win a stakes race along the way it will be good for her.”

Clark said Shihonka, a $220,000 Magic Millions yearling, had come back from her spell more switched on.

“She knows what her job is now. She’s come back in good enough order to get to stakes level and can hopefully take out one of those races over the carnival.”

Yumi ($13) from the Snowden stable was runner-up, from Drummin ($21) from the Curtis stable.

Kiss Sum looks to have a big future on the back of his super home track win.

Tracey Bartley will now target a midweek metro race for the three-year-old Shamus Award gelding, he believes would be an ideal candidate for the $700,000 Four Pillars.

“We’ve got a very nice horse on our hands,” Bartley said.

“I think he’s definitely a Provincial Championships horse and if he can win in town, he’d be putting his hand up for the Four Pillars.

“I’m very excited about him.”

Jason Collett, who brought up a winning double on the $1.85 favourite, was also impressed with the win.

“He’s pretty electric at the moment, with a really good turn of foot and is definitely a mid-weeker.

“He began fine today but didn’t have a hell of a lot of speed. Once I got him in his rhythm, I was able to manoeuvre a way out and make sure he got clear air.”

In a super ride, Collett came from a long last, making ground from the 500m before sweeping wide on the turn and drawing away to win by almost two lengths.

A race in two in the final stages of the 1100m BM68, with the Matthew Smith trained Undeniable getting the bob on the line.

The Not A Single Doubt mare brought up her fifth career win, coming off a successful Brisbane campaign.

It was a patient ride by apprentice Ellen Hennessey, who had to wait for a gap in the straight and then run down the leader Cassy’s Sister at the post.

The runner-up was brave in defeat and likely to have caught the eye of remaining Kosciusko slot holders.

Hennessey was full of praise for Undeniable.

“She chased really strongly and ended off the race well, “she said.

“I was sitting just behind the speed, and she was comfortable there. We waited for the gap to appear and when it did, she extended really well. “

Undeniable ($5.50) beat Cassy’s Sister by a head, with Lady Of Luxury ($3.10) from the Bjorn Baker stable, more than two lengths behind in third.

Different Strokes stamped his credentials as a Four Pillars candidate with a dominant win for Kim Waugh and Hugh Bowman.

The Hinchinbrook gelding was a on the quick back up from Kembla last Saturday where he finished second, in an unsuitably run race.

Back on his home track and with Bowman in the saddle he didn’t disappoint, coming from behind on the turn and drawing away in the final stages to win by two lengths.

“I was pretty confident from a long way out,” Bowman said.

“He seemed to thrive on the quick back up. I’ve had a few horses mentioned to me regarding the Four Pillars and this is the most interesting one.”

Waugh agreed Different Strokes should appeal to slot holders for the $700,000 race.

“He’s the perfect Four Pillars horse and will love the 1500m,” Waugh said.

“He’s a lovely horse and is still learning but he’s catching on quick which is fantastic.

“As he gets more experience he will get even better.”