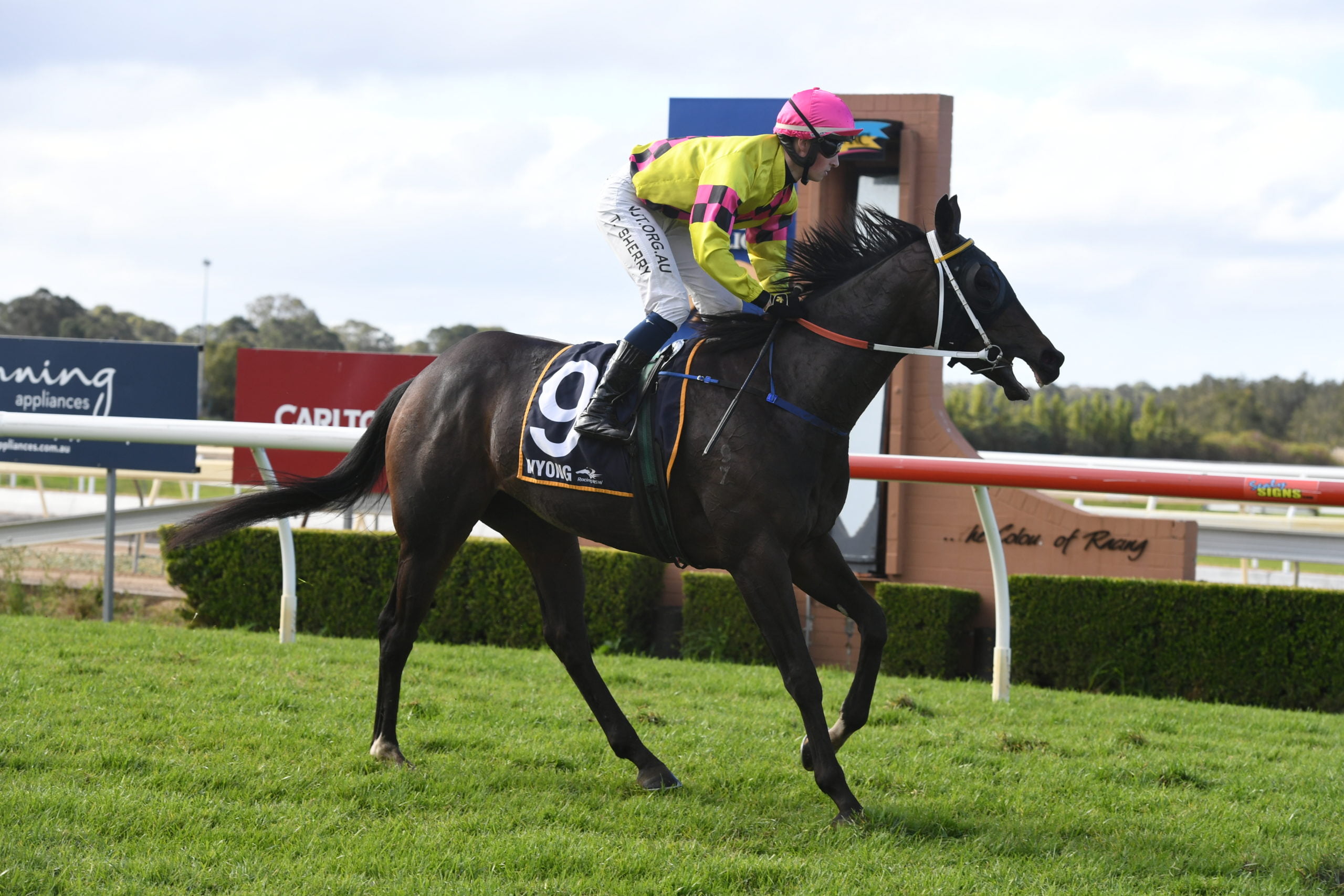 Tom Sherry, the former Irish apprentice who only started riding in Australia last October, has hit the lead in the NSW apprentices’ premiership after riding a winning double at Wyong on Thursday.

Sherry won the Doylo Maiden (1350m) in a boil over on the Paul Perry trained La Jolie Fille ($10) when they beat the heavily backed long odds on favourite Pitchfork.

Later in the day he scored on the heavily backed Ladies’ Gem with a gem of a ride in the Bishop Collins Chartered Accountants Benchmark 64 (1600m).

That takes him to 90 winners for the season, one ahead of Samantha Clenton who is sidelined with an injury.

It also comes at Sherry prepares to soon start riding in the metropolitan area.

Sherry let Ladies’ Gem ($3 fav) settle on the outside of the leader Apicius until the 600 metres when he made his move.

Sherry had Ladies’ Gem on the fence by the time they turned the corner and she careered away to win by two and a half lengths from Delicately ($9.50) which came from well back early.

That was the fifth win for Ladies’ Gem with three of them coming on soft or heavy going.

His other winner, La Jolie Fille ($10) was the only two-year-old in the race she won but gave her older rivals a galloping lesson.

Pitchfork looked to head the winner momentarily in the straight but the two-year-old fought back along the rail to win by a neck.

Absolutely Foxy ($6) was another two- year-old to beat older horses, showing blistering speed to lead all the way.

She just lasted to score by half a neck from the James Cummings trained $19 chance Let Me Think (Jean van Overmeire) which came from mid-field and made up many lengths in an impressive debut.

Portelli said that his filly was a precocious speedster which only knew one way to race.

“She showed blistering speed in the (Inglis) Millenium and led for most of the trip when she ran fourth,” Portelli said.

“We decided to try and teach her to settle by riding her back in a trial but she resented it so we decided to her do her own thing out in front.

“She is only a little thing.

“Kathy rode her at Randwick one day for us and said to keep her racing her as a two-year-old because I don’t think she is going to grow.”

Spaceboy was out in a world of his own when he raced right away in the straight to win the Wyong Rugby League Club Class Two (1100m) by almost five lengths.

O’Hara took advantage of her inside draw to let Spaceboy ($2.40 fav) go straight to the lead and dictate terms before exploding away in the straight to beat the Paul Perry trained Titus ($18) by four and three quarter lengths.

That was Spaceboy’s second win in 13 starts despite showing so much promise.

“I know a lot of punters have been dirty on him but it is a relief to see him getting his confidence and winning like that,” Portelli said.

“I put a tongue tie on him for this race and that might have made a difference.

“It was good to see him open up like that late so we will just let him go through his grades.

“He works like a Group horse at home and my challenge is to eventually get him up to that level.”
***
Brenton Avdulla celebrated his return to riding at Wyong with a gun ride on the Chris Waller trained Rules Don’t Apply to win the Royal Hotel Maiden (1600m).

It was his first ride back at the track after restrictions were lifted following the virus lockdown.

Avdulla moved up three wide approaching the turn but the filly took the turn awkwardly which allowed Misty Brook to maintain her lead.

It was not until close to the line that Rules Don’t Apply was able to grab the lead and score by half a neck at her second run back from a spell.

“That will do her confidence the world of good,” stable representative, Clare Heuston, said.

“She comes out of our Warwick Farm stable and the team there has done a great job with her.”

That was the seventh start for Rules Don’t Apply and followed placings at Kembla Grange, Warwick Farm and Canterbury.

Another odds-on favourite was beaten when the imported German bred stayer Arabolini (Jeff Penza) led all the way to win the De Bortoli Wines Class One and Maiden (2100m) beating the $1.55 favourite Alakahan (Keagan Latham).

Penza did a great job in rating Arabolini ($7) in the lead while the Irish bred Alakahan raced in second last place until nearing the 600 metres when Latham started his move.

However, he was spotting the leader too big a start and despite making up a lot of ground in the straight he ended up being beaten a length.

Arabolini is one of only three horses trained at Gosford by John Cooper.

The horse was originally trained by Kris Lees but never raced for him.

After two trials, the second in January last year, the horse was bought by Cooper and after a spell had his first start when eighth in a Taree maiden.

Since then he has had another 10 starts for two wins.

“The horse has been improving all the time,” Cooper said.

“Paul King helped me find the horse and I would like to thank him for that.”

Travis Wolfgram went to Wyong for one ride and ended up a winner when the Craig Carmody trained Buzz ($9) came across from the outside gate to lead all the way and win the Wyong’s Next Raceday Saturday July 11 Benchmark 64 (1350m).

“Travis rated him really well in front and used his momentum to cruise across from the outside gate to take the lead,” Carmody said.

The was the third win from 13 starts for Buzz which is raced by a syndicate headed by Kim Harding with the horse carrying her colours.