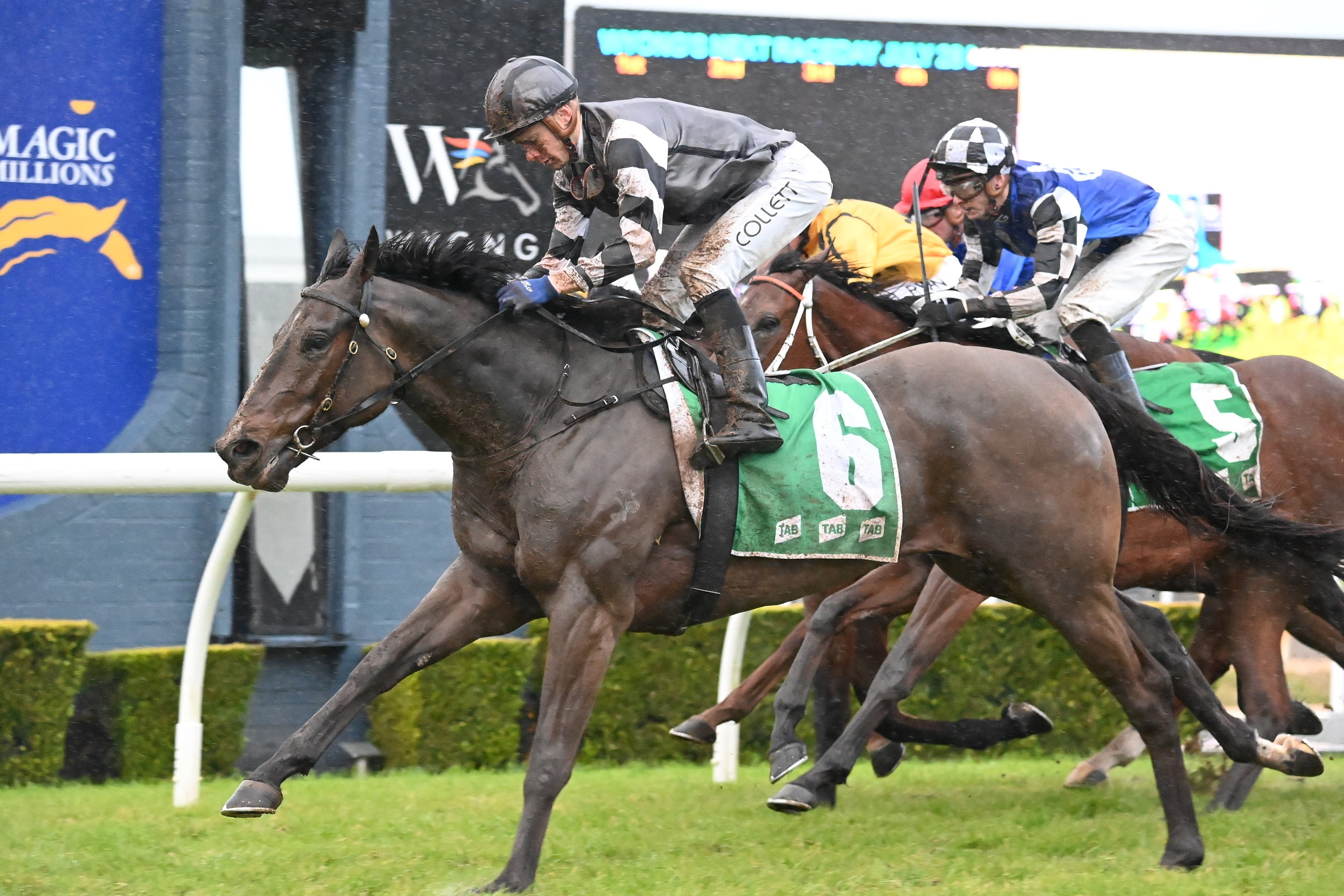 In a day of many highlights local trainer Sara Ryan had an afternoon she will never forget, saddling up her first winner, Prefect Match, just her 17th runner.

Mark Newnham took out the training honours in a competitive day of racing, with Sneaky Paige and Roma Avenue taking out their respective races.

Mark Minervini’s Fire And Ice broke through in the 2YO Maiden and looks to have a bright future, while Annabel Neisham’s Regal Pom claimed his maiden in impressive style, winning by more than eight lengths.

Check out all the highlights below.

A good training effort by Richard LItt saw Snitzel gelding Roccaforte victorious at his first attempt over the 2000m.

It was a month between runs for the three-year-old, but he fought on strongly in the straight to take out the HAPPY RETIREMENT JEFF ENGELBRECHT CLASS 1 & MAIDEN.

Brenton Avdulla was keen to be on pace from the outset and was able to cross and settle Roccaforte behind the leader from the outside gate.

He sat just off the leaders throughout and was able to hold out the $2.20 favourite Queenmaker in the final stages to win by a half-length.

It was the second victory for the winner from 12 starts, his latest outing a second over the 1800m at Hawkesbury, seeing him sent out as $2.50 second favourite at Wyong.

There were excuses for Edward Cumming’s Queenmaker, who failed to settle in the early stages, with Willie Pike forced three wide in the back straight.

A frustrating run of placings came to an impressive end for Annabel Neasham and connections of Regal Pom after the gelding blitzed his opposition in the ALLAN DENHAM RACING 3YO MAIDEN over 1600m.

The stable had always had a good opinion of Regal Pom, a $60,000 Magic Millions yearling by Press Statement.

But he had been unable to break through in his previous 11 starts, where he was placed on seven occasions.

All that became a distant memory after stable apprentice Ellen Hennessey pinged the gates and dominated throughout to win by more than eight lengths.

“He has had plenty of chances, but we were confident today was his day,” Hennessey said.

“We thought the conditions would suit with the soft track, him being up to the mile and in peak condition. He’s a bit of a grinder and we thought being at Wyong we would get going early and it worked out.”

Edward Cumming’s $2.45 favourite Flyaway was runner-up and seemed to have every opportunity, while Stephen Farley’s Party Stop ($8) put in another honest performance to finish third.

The Star Witness three-year-old earned strong support, after two third placings at Canterbury in his past two starts.

Newnham had been confident leading into the race.

“I think he’s at his right distance today. He handles the wet ground and has drawn inside. I’d be disappointed if he didn’t win.”

Tom Sherry positioned the winner just off the leader and eventual runner-up Waller’s I Am Geronimo ($19) in the early stages, before hitting the front in the straight.

It was a race in two from the 600m, with Roma Avenue’s class showing out in the final stages, posted a length and a half win.

Inuwashi ($9), also from the Waller stable, was third, with the both the placegetters not far off a win.

Trainer Brad Widdup had been confident the All Too Hard filly, a $75,000 Magic Millions purchase, would put her best foot forward after a second at Newcastle last start.

“She’s a very honest filly and has drawn well today. It looks like a nice race for her, and I think she gets her chance,” he said.

Van Overmeire angled the three-year-old off the fence from the 600m, taking her to the outside on straightening.

Verzenay ($3) showed a great turn of foot to hit the front in the final stages and win by half a length, at her seventh career start.

Martini Crusader ($26) trained by Stephen O’Halloran rattled home for second and will be one to follow, while there were no excuses for Blake Ryan’s $2.50 favourite Separatist, who finished third.

Mark Minervini looks to have a talented colt on his hands after Fire And Ice ($2.40fav) out classed his rivals to breakthrough for his first win.

Hugh Bowman partnered the son of Hellbent in the 1000m CANADIAN CLUB 2YO MAIDEN, after riding him in two recent metropolitan trials.

The win was never in doubt after Bowman settled him in front on the rails, pulling away in the final stages to put almost five lengths on his rivals.

Fire And Ice had three starts in strong Sydney grade in his first preparation before spelling.

Minervini has always had a good opinion of the colt and now plans to target the $1m Golden Rose at Rosehill in September.

“He’s an exciting prospect for the stable and we’ve paid up for the Golden Rose,” he said. “I haven’t raced a colt with this sort of ability and temperament for a long time.”

The Gary Portelli stable filled with the minor placings with Nonshalaant ($5) and Millybella ($6.50).

Deep Field filly Sneaky Paige ($3.70) bounced back to form to bring up a double for Mark Newnham and Tyler Schiller.

The three-year-old filly had been disappointing at her last start, finishing ninth on the Kensington track over 1150m, but put that form behind her to bring up win number two in the WYONG RACE CLUB FUNCITON CENTRE CLASS 1 over 1100m.

Sherry took Sneaky Paige to lead from the start and was able to dictate terms in front, staving off the challenges in the final stages to win by a long neck.

Newnham said there had been no apparent reason for the filly’s last start failure and her work since had been good.

“We thought she would be able to put herself right up on the pace and being a Canterbury winner on wet ground wouldn’t hurt her chances,” he said.

Runner-up Critical Time ($26) looks the one to follow, with the Freedman trained race favourite Allusionist ($2.90) third.

Jason Attard was full of praise for Sovereign Express after he made it back-to-back wins in the GREAT NORTHERN CLASS 1 over 1600m.

The Bullet Train four-year-old was coming off a Newcastle win over the 1400m on June 25 and Attard had been concerned he might be a bit fresh.

“I was worried, but he settled nicely coming to the turn,” he said. “He was off the bridle in the straight and is still learning to race but loomed up on the outside and was too good.

“We weren’t sure he’d handle the track and it’s good that he’s tractable. It was a beaut win.”

Rory Hutchings had Sovereign Express on the rails and just off the pace, pulling to the outside in the straight and running down the leader in the final stages.

He was sent out $3.20 second favourite and beat the Anthony Cummings trained favourite Believe So ($2.40), with Beenvane ($4.40) from the Jason Coyle stable, third.

A super finish to the program with local trainer Sara Ryan saddling up her first winner after Prefect Match took out the 1300m WYONG’S NEXT RACEDAY THURSDAY JULY 28 BM64.

Ryan has only been licenced for the past year and has had 17 starters after recently taking over as trainer for Domeland.

Prefect Match was having his first start for the stable and was resuming after two trials.

Wet track specialist Jason Collett came from near the rear of the field, storming down the outside to win by a length.

It was the second win from seven starts for the progressive Brazen Beau gelding, a $400,000 Magic Millions yearling.