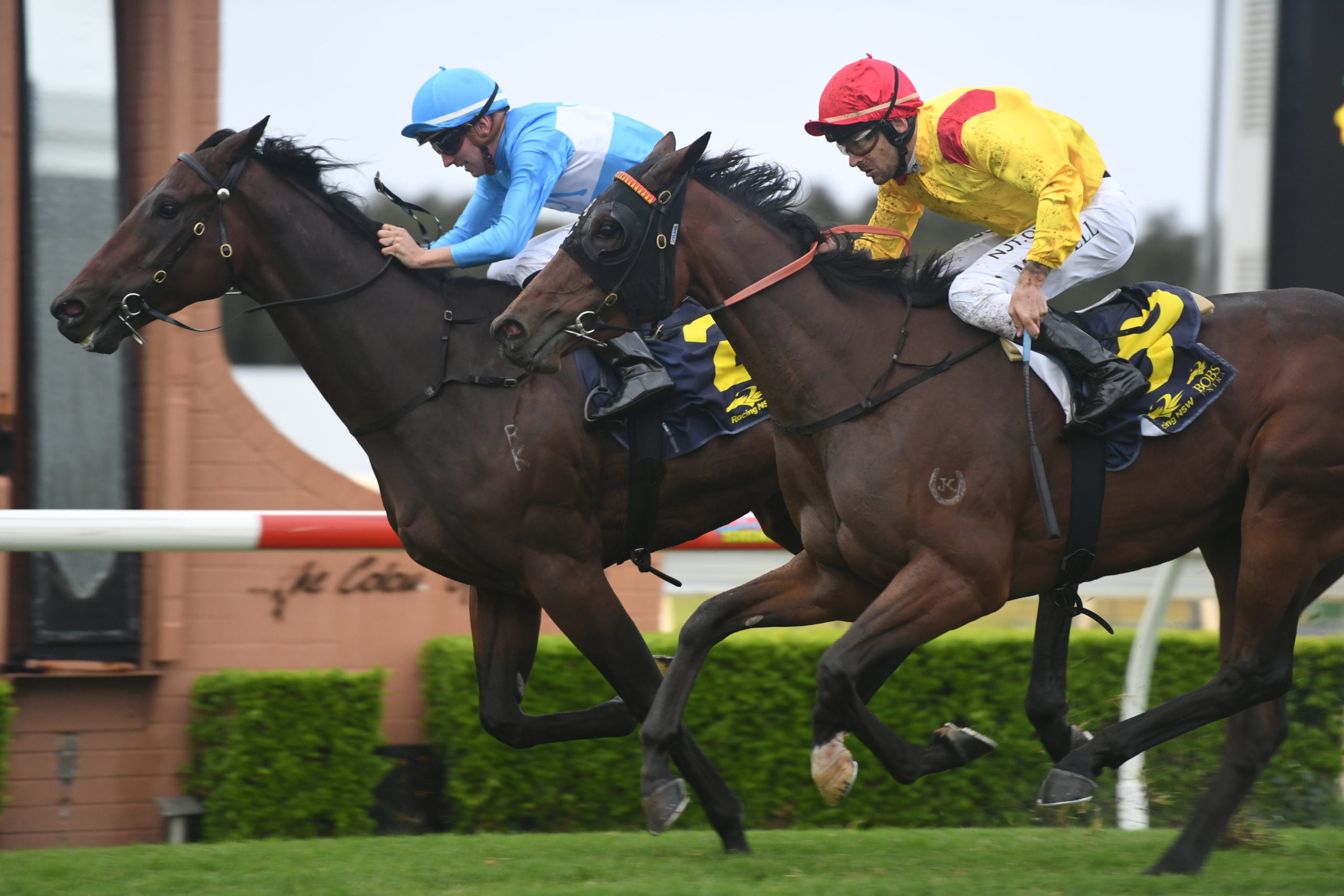 The Waterhouse/Bott trained Reinvest is headed to the Queensland winter carnival after making it back to back wins with an impressive victory at Wyong.

The Newhaven Park bred three-year-old was a Newcastle winner on debut and handled the step up in distance and grade to score a tough win in the HMA GROUP METRO & PROV MAIDEN HANDICAP over 1600m.

A $450,000 yearling purchase, Reinvest started $1.45 favourite and despite being headed in the straight by Fill Of Fun, got his head in front on the line to win by a half neck.

Lee Magorrian had settled the gelding just behind the leader in a slowly run race, moving up on the corner and battling it out the final stages of the straight to score a tough win.

“I’ve had Gai on the phone and she’s very excited,” he said.

“They picked out this race and he got the job done. This horse has got potential.

“It was only his second run in a race and to win a tough class 1 is impressive.

“Gai is looking at taking him to Queensland for a longer race up there over the carnival.

Reinvest beat the Anthony Cummings trained Fill Of Fun ($17), with Cottenham ($14) from the O’Shea stable, third.

A strong ride by apprentice Tom Sherry secured victory for the John Thompson trained Lando Bay in the WYONGRACECLUB.COM.AU MAIDEN over 1350m.

The short-priced favourite went head to head in the straight with runner-up Daksha, getting the bob on the line to score by a long neck.

Stable representative Danielle Podelwski described it as a “good win.”

“He had to dig deep to get over the line. It was great to get his maiden win,” she said.

“It was a good ride by Tom. When he asked him to give that extra length near the line he responded. It was nice.”

Lando Bay ($1.60), a $100,000 Inglis yearling, was having his eighth career start, having previously been placed twice at provincial level.

The three-year-old Sebring gelding was coming off a third at Kembla last start.

The Widdup trained Daksha ($5) was second, with Oakfield Lane ($14) from the Damien Lane stable, third.

A race to race double for in-form apprentice Tom Sherry after Miss Maisel’s win in the CARLTON & UNITED BREWERIES MAIDEN over 1100m.

The Mark Newnham trained filly was sent out $3.10 favourite after her narrow last start defeat to Marboosha in the Miss Finland at Muswellbrook on April 13.

Marboosha, trained by the Snowden’s was an impressive winner at Warwick Farm on Wednesday, franking the form of Miss Maisel.

Sherry settled the Hinchinbrook filly just behind the leaders, hitting the front on straightening before drawing away in the final stages to win by more than two lengths.

Newnham has always had an opinion of the two-year-old, who was having her fourth race start.

She was sent out favourite on debut at Kembla in November but missed the start, storming home to finish second.

Miss Maisel finished fifth at a subsequent Rosehill start before spelling and resuming at Muswellbrook.

Sherry, who rode the filly at Muswellbrook, was confident coming into the Wyong race.

“We thought we would just go to Muswellbrook and win but it didn’t pan out that way,” he said.

A great training performance by Jason Coyle with Maui Girl ($3.40) returning to the winner’s circle first up after 18 months on the sideline.

The four-year-old mare scored a tough win in the SKY RACING CLASS 2 over 1350m after being caught wide in the early stages.

Andrew Gibbons was forced to go forward and sat just off the leader, hitting the front on straightening and holding off rivals to win by a long head.

“It was a good tough effort,” Coyle said after the race.

“Both her trials had been good, and I thought she was forward enough to run a nice race, but I was a little concerned with her getting onto a track that was a touch testing.

“It was good to see her knuckle down over the last 100m and get the win.

“Things didn’t quite pan out like we thought early, she was caught wide and Gibbo had to roll forward mid-race. She relaxed then but not having raced for so long, I was always worried about the last little bit.

“I think she’s a mare with some ability and she can only improve off the back of that.”

Gerald Ryan believes there is plenty of improvement in his filly Sally’s Day who broke through for her second win in the COCA-COLA BENCHMARK 64 over 1100m.

The More Than Ready filly, a $220,000 yearling, bred and raced by John Singleton, was resuming following an impressive trial win at Rosehill on April 6.

She was sent out $2.50 favourite and didn’t disappoint, with Christian Reith sitting just off the leader, hitting the front on straightening and drawing away for an impressive two length victory.

“She’s only a light little filly and can’t cop a lot of work, but a three-year-old filly up against the older horses today, she did a good job.

“She had to carry weight and cover ground, she was good.”

Ryan believes Sally’s Day will only get better with time.

“When you can get her to settle like Christian did today, she can race well but she can also over race.

“We’ve been working on getting her to settle and when she learns to switch off completely, she’ll have a good turn of foot.”

Ondo Pasa ($14), trained by Stan Thomas was second, with the locally trained Dual Escape ($15), from the Denim Wynen stable, third.

A change of gear and a welcome change of luck were key to the Lees trained Darleb ($5) taking out the WYONG’S NEXT RACE DAY THURSDAY MAY 14 BENCHMARK 64 over 1300m.

The Uncle Mo colt, a $16,000 yearling purchase, had no luck at his last start at Wyong and Lees added blinkers.

The move proved successful and courtesy of a strong ride by Sam Clenton, he posted a narrow victory over Kim Waugh’s race favourite Holy Reign ($3.20).

The pair fought it out in the final stages with Darleb gaining ascendency on the line.

“He was too good today,” stable representative Danny Greer said.

“Everything worked out a lot better today. It was a lovely ride by Sammy.

“They looked to be a jammed up on the home turn, she just popped out of that trouble, found clear running and was strong late.

“He was really good third up today with the blinkers on. Sammy got him out of trouble and really lifted him over the line late. “

Peter Green seems to have found the key to former Victorian galloper Auvergne, with the filly bringing up her debut win in the HMA GROUP METRO & PROV MAIDEN.

The three-year-old was having her second start for the Green stable, with three previous unplaced starts in Victoria.

Hawkesbury based Green picked her up for the bargain price of $3000 in December and is now reaping the rewards.

The Dawn Approach filly finished fifth at Wyong over 1350m on April 16 and appreciated the step up to 1600m.

She had no trouble handling the going, with a heavy downpour hitting the track shortly before the race.

Green had been confident Auvergne ($7.50) could run a good race, with the only question mark the distance.

“I thought if she gets the mile and settles, after not settling last start at Wyong, she would run well because she’s been working very well,” he said.

“We got a nice run in behind them and that suited her.”

Mikayla Weir settled Auvergne toward the rear of the field, bringing her along the rail on straightening to snatch a narrow win on the line.

She beat Clever Man ($8) trained by Anthony Cummings, with Gloraya ($9.50) from the Perry stable, a length behind in third.