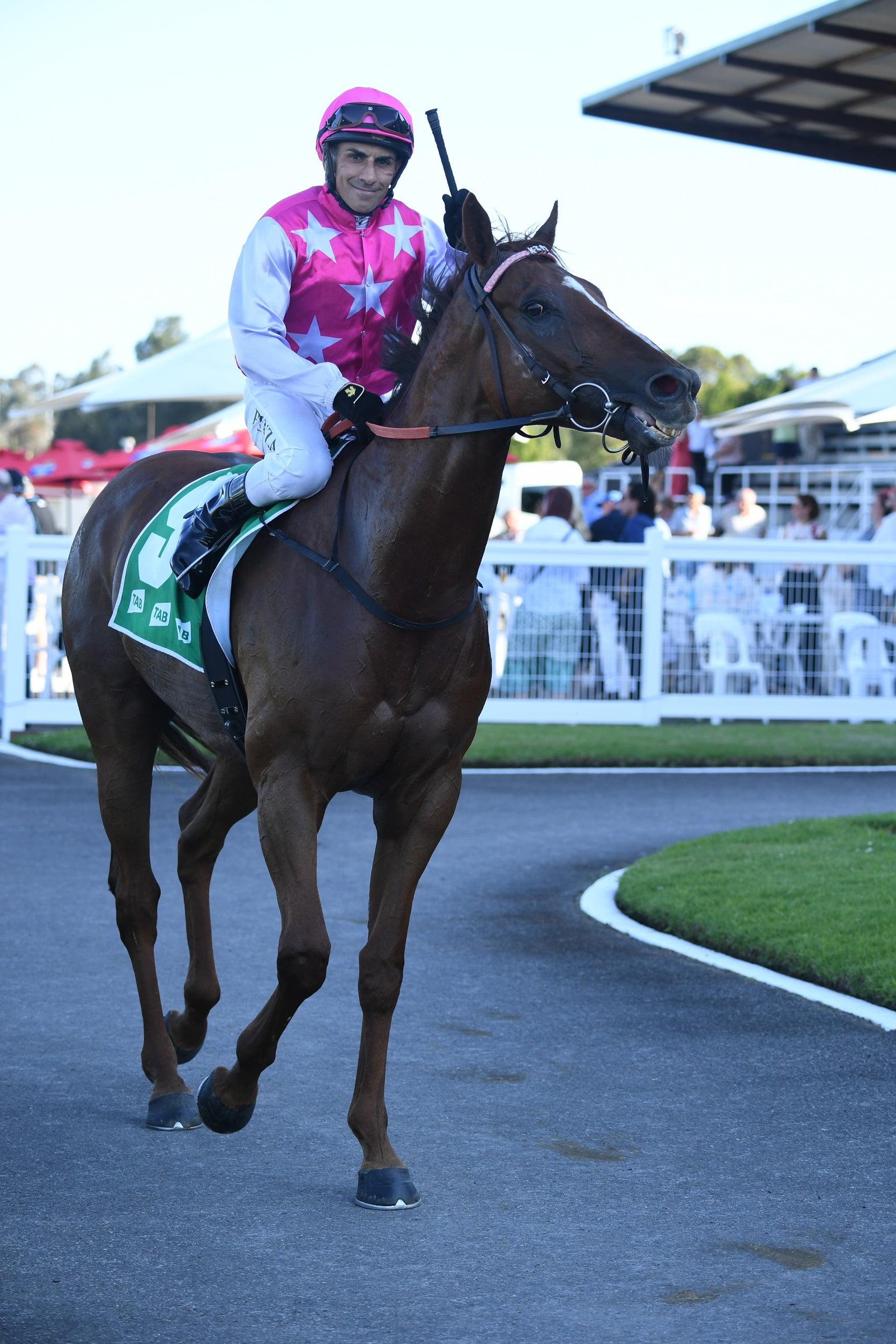 A local win in the $40,000 SKY RACING Summing Provincial Series opening heat was the highlight of the eight-race ‘Back To The Races’ meeting.

Kim Waugh’s Oxford Tycoon was too strong for his rivals in the feature race and now heads to the $150,000 final at Newcastle on December 18.

The six-year-old Written Tycoon gelding will step up to 1600m for the final, having previously placed over 1500m at Rosehill.

The Angela Davies trained Momack, who fought on gamely for third, also earned a finals berth, and will also appreciate more ground.

Reece Jones, who took out the Wyong Apprentice Premiership last season, made an impressive return to the track after injury, riding a race to race double.

Speedy Scone filly I’m Not Slew looks to have an impressive future, easily making the step up from Country to Provincial grade in the 1000m BM64.

The three-year-old was coming off a second at Kembla over the same distance on October 23 and earned strong late support, starting $2.30 favourite.

Koby Jennings gave Vyner a confident ride, settling just behind the leaders before taking off on the turn.

He kicked three lengths clear on straightening and was never in doubt in the final stages, beating his rivals by half a length.

Newnham has always had an opinion of Vyner, whose mother Vadomoro was runner-up In the VRC Oakes and Vinery Stud Stakes.

“Vyner is a nice horse,” Newnham said. “He was a late foal, so he has taken a while to mature but he has always shown me above average ability.

“We thought he would be effective at the mile to 2000m, and he’s shown that today.”

John Sargent’s Al Sahara, the $2.80 second favourite, was runner-up, over Vitae ($7), from the Matthew Dunn yard.

Back-to-back wins for Louise Day on the Waller trained Black Queen, who justified her short price to record another dominant Wyong win.

The Mongolian Khan mare was ridden to victory by Day at Kembla on October 23, catching the eye of punters who were confident she could replicate her last start win and sent her out $1.30 favourite.

The victory was never in doubt with Day settling the four-year-old just behind the leader in a slowly run race, before taking him to the lead at the 600m mark and drawing away in the straight to win by almost two lengths.

Black Queen was having her eighth start, after beginning her racing career with a second in New Zealand.

She made the switch to Waller’s Sydney stables and has since won two races, with four placings.

Joe Pride made the trip to Wyong to see his gelding Cushy win before heading back to Sydney to saddle up his Golden Gift favourite Shalatin.

And while Shalatin was narrowly beaten he also tasted success at Rosehill with Zoushack.

Pride has a share in the ownership of Cushy, a Super Easy gelding having his fourth career start.
He was in a battle for favouritism with Gary Moore’s Stay Wealthy and the pair were in a race of their own in the final stages, with Andrew Gibbons getting the most out of Cushy on the line.

The three-year-old appreciated the step up in distance and firmer track, after a last start third over 1200m at Kembla in the heavy on October 23.

Louise Day brought up a double in an upset win on the Maher Eustace first starter Pono Kitoro.

The Reliable Man filly was the outsider in the field, with Day giving him a soft run toward the rear of in the early stages.

She made a sweeping run from last to first just before the turn, and from then on, the win was never in doubt.

Pono Kitoro drew away in the final stages to win by almost three lengths.

The three-year-old was coming off two moderate Metropolitan trials, the latest on October 19 when he was beaten more than six lengths over the 1045m.

He relished the race day conditions, giving Day a double and win for her former boss Maher.

The $2.45 favourite Estonia was second for Richard and Michael Freedman, with Drummin ($5.50) trained by Lee and Cherie Curtis, third.

Leading apprentice Reece Jones didn’t take long to return to the winner’s circle in his second meeting back after being sidelined with injury.

At only his second meeting back he piloted speedy Goulburn sprinter Girl Mania to a four-length win.

The Jean Dubois trained filly was sent out $3.40 second favourite on the back of her fourth at Hawkesbury when resuming on October 26.

It was another race in two in the final stages, with Girl Mania running down Brad Widdup’s $2.45 favourite Mareeba early in the straight, and then drawing away for a dominant win.

Matthew Smith’s Rubigal ($7) was a length behind in third.

A Capitalist filly, Girl Mania has now had a win and two placings from her seven starts.

A race to race double for the returning Reece Jones, coming from last on the turn to steer Artero to victory.

The Flying Artie colt, trained by Matthew Dunn, was back in grade after finishing last in the Listed Brian Crowley at Randwick on October 23.

He was unfancied by punters drifting in the betting to $6.80 but seems to have returned to the form that saw him take out the Inglis Challenge at Scone in May.

Jones settled Artero at the rear of the field, coming from behind on the turn with a sustained run to win by a length and a half.

He beat Dale Riley’s The Defiant One ($21) who fought on strongly in the straight, with Irish Kisses ($2.25fav) from the Tracey Bartley yard, third.

A home track win in the opening heat of the Sky Racing Summer Provincial Series with Kim Waugh’s Oxford Tycoon too strong for his rivals.

The six-year-old earned a spot in the $150,000 final with a half-length win over the Kris Lees race favourite Darleb.

Oxford Tycoon was coming off a second in the Midway over 1300m on August 28 and was the recipient of strong late support.

He started $3 second favourite and didn’t disappoint, courtesy of a confident ride by Jeff Penza.

He stalked the leaders prior to the turn before hitting the front on straightening.

Oxford Tycoon put two lengths on his rivals in the straight and was able to hold out the fast-finishing Darleb.

They put a gap between the rest of the field, with the Angela Davies trained Momack fighting on strongly in the final stages to finish more than three lengths behind in third.

Waugh had been confident of the chances of Oxford Tycoon leading into the $40,000 heat.

“I’ve been really happy with him leading into this,” Waugh said.

“He galloped the other morning and worked really well.

“It’s the perfect distance for him and he’s won here before so there was plenty in his favour today.”

The Scott Singleton trained I’m Not Slew looks set for bigger things on the strength of her dominant win in stronger grade.

The speedy Sooboog filly was stepping up from a Scone win over the 1100m on October 22 but had no problem with the rise to Provincial grade.

Christian Reith drove the three-year-old to the lead from the barriers and maintained the front throughout, drawing away in the straight to win by more than a length.

Punters were confident I’m Not Slew could put together successive wins, sending her out $.190 favourite on the strength of his Scone win.

The victory was never in doubt, with the filly showing an abundance of speed throughout.