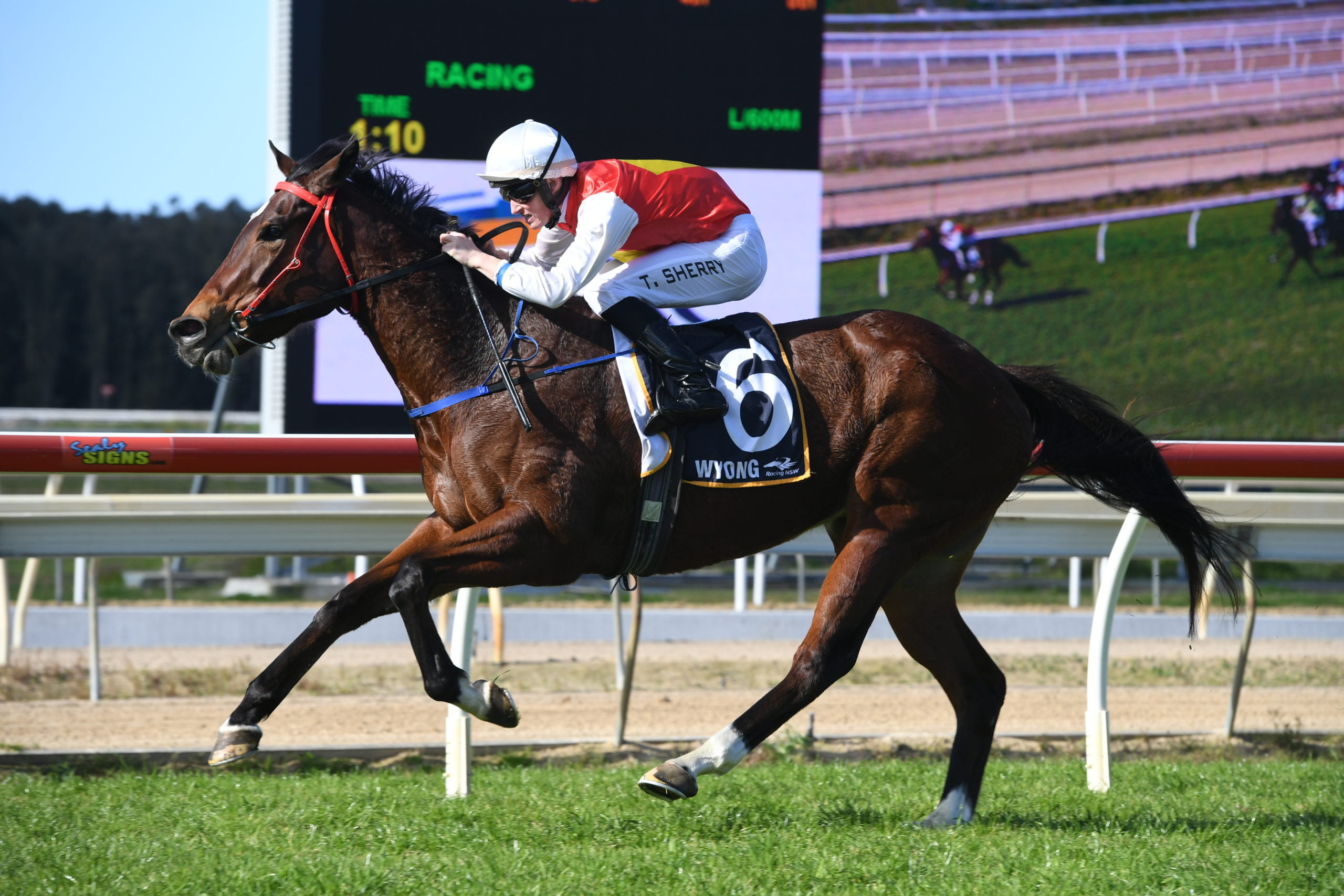 Trainer Tanya Randall is renowned for cheering home her winner’s but had to be content with watching from her hospital bed when My Rose My Kingdom greeted the judge.

The bargain-buy filly went from villain to heroine when she took out the 1200m CARLTON DRY PROV & CTRY MAIDEN in impressive style.

The previous morning Randall was leading My Rose My Kingdom off a float when the horse was spooked and jammed her into the side of the trailer.

She suffered two broken ribs and a broken collarbone and is recovering in John Hunter Hospital.

It was left to her partner Mal Ollerton to saddle up the three-year-old, with Tanya watching on from her hospital bed.

Apprentice Tom Sherry took My Rose My Kingdom ($9.50) to an early lead, which she maintained throughout, kicking away in the straight to win by more than three lengths.

“The filly won really well, and she still has a bit to learn.

“We put her in a couple of shorter races, and I thought the run at Newcastle was better than her second at Muswellbrook a couple of weeks earlier.

“I said to Tom (Sherry) today not to fight her, because I don’t think she’s as affective held up. She’s a bit of a free striding filly and can quicken off that.”

Ollerton said My Rose My Kingdom, a $4000 purchase, was bred to get over further ground.

“I thought there must have been something wrong with her when we got her at that price, but they were just selling everything off. She’s always been a nice filly and is still growing, so we haven’t rushed her.”

Ollerton said they would look for a similar race around the provincials in coming weeks.

Moccasin Miss may have delayed her retirement plans with a strong win the OFF THE TRACK NSW BENCHMARK 64 over 1100m.

The Gary Portelli trained mare maintained her impressive first up record with three wins and three placings from seven starts.

Perfectly ridden by Shaun Guymer, Moccasin Miss ($8) settled just behind the leaders, with Guymer patiently waiting for a split at the top of the straight and pulling away along the rails to win by a length over the fast finishing Ragged Rascal ($11). The Godolphin trained favourite Badia ($4.20) was a half-length behind in third.

“I’ll be sad when she’s retired because she just turns up week after week,” he said.

“She’s been with us since she was two. I bought her in Western Australia for $60,000, out of good mare Moccasin Bend, who won a West Australian Guineas.

“She will probably get retired to stud after this campaign, but we’ll see how she goes.

“It was good ride by Shaun. I couldn’t believe the rails run, he was sweating on it, got it and pounced.

“She’s always there about and when she draws well fresh and especially around these sorts of tracks, she’s pretty hard to beat first up. I thought her form would line up against these.”

An exciting finish in the DE BORTOLI WINES 3YO MAIDEN over 1600m with the Gerald Ryan trained Swahili Mai ($6) getting the bob on the line.

The three-year-old, by Japanese sire Kinshasa No Kiseki, brought up her first win at her sixth race start.

Apprentice Tyler Schiller had settled the filly just off the speed, bringing her to the outside in the straight.

Swahili Mai looked to have the measure of the Anthony Cummings trained favourite Mooy ($2.60) but she fought back to make It a close finish, beaten only a short head.

Ryan said he hoped there were more wins in store for Swahili Mai, an $80,000 yearling purchase.

“I had a big question mark on her running 1600m and thought if she can’t run it today with 52kg on her back she never will,” he said.

“She probably felt the pinch late but got the job done.”

He said the filly had been unlucky in her last two starts.

“Two starts ago at Canberra she should have nearly won, and the other day at Newcastle she was unlucky again. She’s an honest little thing.

“Her sire won 6 Group1’s in Japan and has thrown a couple G1 winners this season. I hope she can go on and win another one.”

Zounate ($3.10), from the Portelli stable, who led up the field finished third, two lengths behind the winner.

The Deep Field gelding easily rounded up his rivals in the straight, courtesy of a well-timed ride by Andrew Gibbons.

He settled the three-year-old just behind the leaders, putting pressure on race favourite Lake Marion ($1.75) on the turn, before drawing away in the final stages to win by more than two lengths.

“He’s needed a bit of time,” trainer Bryce Heys said after the win.

“There were issues with his mannerisms due to tractability in the run, but today was the first day the race set up in a manner he was able to take advantage of, and he was able to do that.”

Heys was full of praise for the ride by Gibbons.

“Draw a gate, have a horse going well and Gibbo’s the man to put on,” he said.

Emthree, a $100,000 yearling, was having his seventh career start and coming off a ninth at Newcastle on June 27.

I Am Flying ($26) trained by Peter Cheers was second, from Lake Marion.

Yangarra Rose went one better than her debut at Newcastle, to take out the 1000m JIM BEAM 2YO MAIDEN in a close finish.

The well-bred Zoustar filly, a $460,000 yearling, was narrowly beaten over 900m on July 7 and appreciated the step up in distance to claim her first victory.

She was given a great ride by apprentice Andrew Adkins and finished strongly to run down the leaders in the final stages of the straight.

“She was good up in trip. Andrew got her into a good spot, she found her rhythm and relaxed well,” he said.

“Coming up the straight another horse started to veer out a bit, and she was a little bit wary about going past it, but when she knew what she was doing Andrew got stuck into her and she let down really good.

“She’s by Zoustar and we are of the opinion she will probably be a better Autumn three-year-old. She still has to fill out quite a bit, she’s got a good mentality, now we just need the physical side to fill out. She’s done a great job in her first preparation.”

Runner-up, the Tracey Bartley trained Barossa Rosa ($2.30fav), looked promising, with We Had Too Many ($21), trained by John Thompson, third.

An upset in the 1350m TAB.COM.AU CLASS 1 with the Hawkes trained Snowfire ($12) proving too strong for his more favoured opponents.

The Star Witness gelding brought up his second career wins from six starts, courtesy of a good ride by the in-form Koby Jennings.

He took an early lead and picked up some easy sectionals in front, before drawing away in the straight and holding off the fast finishing, short-priced favourite Al Snip ($1.70).

The winning margin was a long neck, with the Jason Coyle trained Undoubted ($13), a length behind in third.

Snowfire, a $120,000 yearling, had been racing in Victoria prior to spelling. He resumed with a fifth at Hawkesbury over 1300m on July 2.

The win continues a great run for Jennings, who has booted home eight winners in the past three weeks.

Veteran trainer Pat Farrell showed his younger counterparts how it’s done, taking out the 1000m GREAT NORTHERN ON TAP CLASS 2 with One To Remember.

The Office Bearing gelding was having his fourth career start, having won his maiden at Muswellbrook on May 1.

Farrell gave the gelding a 10 week freshen up, starting him at Wyong without a trial.

It proved to be a winning move, with One To Remember blitzing his opposition to win by almost three lengths.

Leading jockey Jeff Penza took advantage of the one barrier, jumping the two-year-old to the front.

He led throughout and drew away from the field in the final stages, beating the Stephen Schofield trained, Mosht Up ($41), with Can I Rock ($6.50), trained by Mick Dwyer, a further three lengths behind in third.

Farrell saddled up three runners in the race, with his other two Euroaire and When You Wish, finishing toward the rear of the field.

The well supported Vienna Rain finished the day well for favourite backers, taking out the WYONGS NEXT RACEDAY FRIDAY JULY 31 BENCHMARK 64 over 1600m.

The Manhattan Rain gelding caught the eye of punters with a good performance over the 1500m at Newcastle on July 4.

He was well ridden by Adam Hyeronimus, who box seated behind the leaders, before taking a rails run on straightening and drawing away to win by more than a length.

A $50,000 yearling, Vienna Rain raced by Blueblood Thoroughbreds, has now had 10 starts for two wins and four placings.