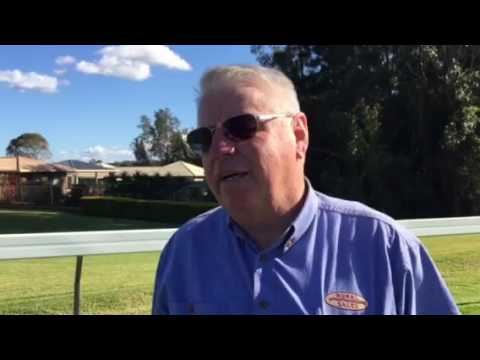 A Tamworth Cup start could be on the agenda for the Tas Morton trained Acoustix after his tough win in the WWW.TAB.COM.AU CONDITIONAL PROVINCIAL CUP – CLASS 4.

The well-bred Snitzel gelding, ridden by Jenny Duggan, led throughout to win the feature race by almost two lengths.

“It was a very gutsy win,” Morton said.

“When he was taken on mid-race, I thought this will be a real test for him.

“He certainly proved his ability by going on with it.”

Morton said he had always expected to see the best of Acoustix when he got over the mile.

“It was the right distance for him at Gosford last start and he was only beaten a lip,” he said.

“It was a step up in class for him today, but he was good and got the job done.”

Morton, who races the four-year-old with close friends, said he would now consider the Tamworth and South Grafton Cups for Acoustix, or a mid-week metropolitan meeting.

“He’s continuing to improve so that’s promising. He’ll be weighted out of most country races now, but we’ll look at the Cups and a mid-weeker in town.

Acoustix ($5), who has now had five wins from 19 starts, beat the $3.80 favourite Surjin from the Perry stable, with First Lady ($7) trained by Gary Portelli, third.

Million-dollar colt Signficance showed his class to break through for a dominant debut win in the H & H CATERING MAIDEN over 1600 metres.

Trained by John O’Shea, the Frankel gelding had been disappointing in his last two starts on rain affected tracks but appreciated the good four Wyong surface, putting more than seven lengths on his opposition.

Apprentice Tom Sherry had the UK bred colt in the perfect position, just behind the leader before hitting the front around the 600m mark and pulling away in the straight.

He cruised to the line, never overextended by Sherry, to record an impressive seven and a half length win at his sixth start.

Signficance, who justified his $1.55 favouritism, was purchased as a yearling at the Inglis Sales by Domeland for $1.1million.

He beat the Gerald Ryan trained Highbury ($3.90), with the locally trained Dunlee ($7) from the Damien Lane stable, third.

Speedy gelding Kyo ($5.50) upset some of the more favoured runners to win the 1000m RAPID CLEAN CENTRAL COAST 3YO MAIDEN in a tight finish.

The three-year-old, by Poet’s Voice, had shown plenty of speed at her previous two starts at Gosford over the 1000m and although finishing out of the placings had only been beaten just over a length on both occasions.

Apprentice Cejay Graham was confident the gelding would appreciate the Wyong track.

“It’s my first ride on him but his pattern had been to jump and run and that is an asset on a track like Wyong,” Graham said.

“I think the two kilos off definitely helped, particularly in the closing stages.”

Graham followed the race plan and was able to dictate terms with Kyo jumping to the lead.

She pulled away in the straight and held out the fast finishing Glock ($12) to win by a nose.

Short priced favourite More Prophets ($1.90) was third, two and a half lengths behind the winner.

The winner is trained by Craig Carmody and raced by Kim Harding.

Gerald Ryan expects Secretly Awesome ($1.55) to be a much better horse as a four-year-old after his impressive win in theGO ELECTRICAL TUGGERAH MAIDEN.

The Snitzel gelding put paid to his opposition over the 1350m in just his second race start, having finished second on debut at Newcastle over 1200m on March 31.

Ryan said Secretly Awesome, owned by Cressfield, had been a ‘very, very difficult horse’ to get to the races.

“It’s taken a long time to get to this stage,” Ryan said. “He been a very difficult horse to get going, not just around the stables but at the farm, at the breakers, everywhere.

“He trialled well and raced well at Newcastle last start. I think we will get a better idea of how far he will go next preparations. I’ll give him a couple more runs for education and then turn him out.”

Keagan Latham, settled the three-year-old just behind the leader, peeling three-wide on the turn to hit the front and dash away in the straight.

He posted a three-length win over the Waller trained Savaspur ($5.50), with Mikhail ($10) from the Portelli stable, third.

Latham said he had thought Secretly Awesome would take a ‘power of beating.’

“He’s a lovely horse and Gerald said he had come on a ton since his first run, so I thought he’d be hard to beat.”

A nice ride by Louise Day secured victory for the Anthony Cummings trained Loves To Rock in the 2100m CARLTON & UNITED BREWERIES BENCHMARK 64.

It was the second win in five days for the tough Loves To Rock mare, who was successful at Newcastle over 1850m on Saturday.

The mare continued the trend of favourites winning, scoring a dominant three and a half length victory.

The four-year-old, who is raced in partnership by Cummings, is putting together an impressive record with four wins from 15 starts, three this preparation.

Day settled Loves To Rock just behind the early leader, maintaining the position until around the 500m mark, when she hit the front, pinching a break on straightening.

Shamus Award gelding Corcra made it back to back wins taking out the 1000m COCA-COLA CLASS 2 in impressive style.

The Bjorn Baker trained three-year-old earned plenty of support from punters on the strength of his last start Nowra win and was sent out $3.30 favourite.

He didn’t disappoint, with jockey Mitchell Bell giving him a lovely run just behind the leaders, before taking him to the front on straightening and drawing away to win by more than a length.

Baker said Corcra had handled the step up to provincial class.

“It was another test for him today. He came into the race in good order,” he said.

“I thought his last win was very good and he showed good speed.

“I wanted him to be positive today because he’s a very fast horse.

Corcra, an $80,000 Inglis Classic yearling, brought up his third win from seven starts.