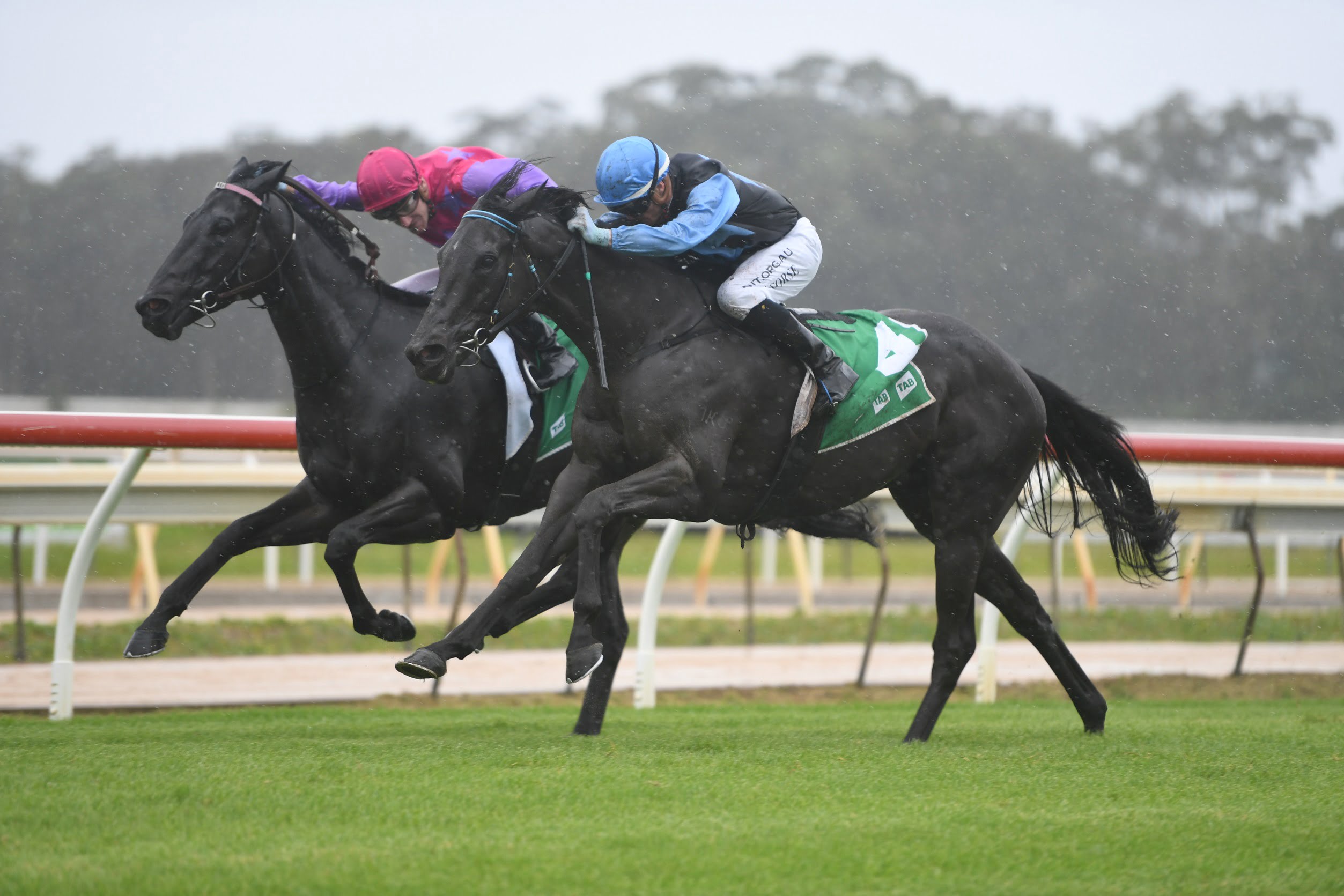 Ben Hill trained his first winner in almost two years courtesy of Allthehills who relished the heavy 10 track at Wyong to take out the 1350m Great Northern Provincial and Country Maiden.

The Love Conquers All gelding has been a handful for Wyong based Hill who now seems to have found the key and his hopeful there will be more wins to come.

With heavy rain falling throughout the day the meeting was postponed after the first four races due to poor visibility.

But fortunately for Hill his gelding took out the third race after running down Kim Waugh’s $1.40 favourite Oxford Vision on the line.

It was a patient ride by local apprentice Pat Scorse, who settled the four-year-old just worse than midfield before peeling out around the turn and coming home strong to win by a long neck.

Hill had been unsure how Allthehills would get through the heavy track but the four-year-old had no issues.

“We missed a run at Newcastle over 1800m and I scratched him on a heavy track. I thought we’ll come here today and give him a nice sound hit out on the heavy and see how we go, and he obviously got through it,” Hill said.

“Callum Bailey rides him in his work – he’s a bit hot headed for me. Cal has done a great job with him. He’s been a handful of a horse so hopefully he can go on with it now.

“This will hopefully give him the confidence he needs. He was a very hot horse early on and we’ve had a few issues on the ground, no injuries at all, but hopefully the penny is starting to drop.”

Scorse said he believed Allthehills would get over more ground.

“I know Benny wants to get him over more ground and I don’t think he’ll have any trouble with that,” he said.

“We did have a nice run through today. I thought speed was quite a genuine tempo for a heavy rack and I got a nice trail a few pairs back.

“He really switched on and get through ground good and when I ask him to improve, he gave me everything he had and finish the race off nicely.”

Allthehillis ($12) is raced by Hill and family members and was having his 10th race start.

It was an all-Wyong trifecta, with Wayne Seelin’s Supreme Play ($51) third.

Sam Clipperton rode two of the four winners, taking out the 1350m Canadian Club Maiden on Mirra View for the Snowdens and the Vale Cam McBrien Maiden over 1000m on Prefer To Be Ready for Jay Hopkins.

More Than Ready filly Mirra View was coming off a third at Newcastle on a slow track on March 17 and earned the confidence of punters, being sent out $1.30 favourite.

She didn’t disappoint scoring by almost a length after Clipperton started his run around the 600m mark, circling the field and leading down the straight.

Runner-up Roccaforte ($4) trained by Richard Litt, was strong late with a win not far off.

Clipperton had partnered Mirra View in her previous start and had been confident coming into the race.

“Her first up run was sound, and she went into that with only one trial,” he said. “She’s only a light filly and took plenty of improvement from that.

“She looked the better horse in the race today, but she still had to get out there and do it.

“I thought being by More Than Ready she should handle the ground and she did.”

Clipperton had also been confident about the chances of Prefer To Be Ready ($4.40) with the filly having previously been placed on a heavy track.

Raced by a syndicate including Hopkins wife Hannah, the three-year-old had been runner in her two previous starts last preparation at Gosford and Tuncurry.

Clipperton settled her just off the speed in the early stages and was able to get the best out of her in the straight, drawing away to win by a length and a half.

“She’d had a good second on a heavy nine, so I thought she’d get through the ground. Jay had given her a good trial over 1000m, so I knew she’d be well primed for today.”

Mark Newnham’s race favourite Sonic The Hedgehog was able to outstay his rivals in the 2000m TAB.COM.AU Maiden.

The American Pharoah gelding was having his fourth race start, after finishing third at Goulbourn on March 18 over the 2100m.

It was a race in two in the final stages with Sonic The Hedgehog getting the better of John Sargent’s Essential Sky ($3.70) to win by a length.

Josh Par was the winning rider, with the three-year-old gelding having no problems getting through the heavy 10 conditions.