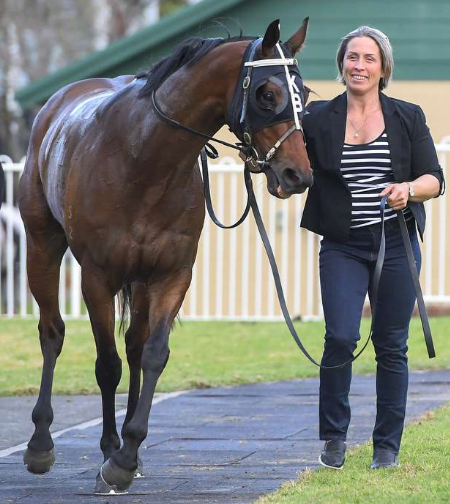 On the back of a successful trip north, Kristen Buchanan is hoping for continued luck when she saddles up two runners on her home track this Thursday.

Buchanan made the long haul to Brisbane on Saturday but returned a winner after Delexo proved too strong in the 1000m Class 6 Plate at Eagle Farm.

She was chasing drying tracks in Queensland and would prefer the same surface for both her Wyong runners.

“It was great to get the winner at Eagle Farm. It had been on my mind for a while to head up there because Delexo doesn’t handle the heavy tracks,” she said.

“I had to scratch him three or four times which isn’t ideal, so we made the decision to race up there.

“Even then there was uncertainty because with all the rain we didn’t know until Thursday night if we could get through.”

Buchanan returned to Wyong on Sunday and hopes the predicted rain holds off on Thursday for her fillies Tikitiboo and Raging Climax.

She is keen to finally get to the track with Starspangledbanner filly Tikitiboo, who has looked impressive in her two recent trials.

The three-year-old debuts in the 1000m Maiden and will be ridden by stable apprentice Maddi Derrick.

“She has had lots of trials but the main reason for that is the timing just hasn’t been right, and I’ve been trying to dodge the wet tracks.

“I think she’s a really nice filly. She’s hot to trot and ready to get on with it. I don’t know if she’s a 1000m horse, but it will be a lovely starting point for her.

“Educationally she does everything right, so she’s definitely ready to go to the races and I give her a chance although the wide barrier isn’t great.

“Her trials have been good and while 1000m is an ideal starting point for her, it’s not where she’ll end up.”

Buchanan is also keen to see Tosen Stardom two-year-old Raging Climax get over more ground in the 1350m Maiden.

She had her first start at Newcastle on March 17 over 1200m with Buchanan describing her effort as “lack lustre.”

‘I think she’s a really nice filly, but her first start was a little underwhelming, so I’ll be hoping for improvement.”

Different Strokes starts in the 1350m BM68 after coming off an unplaced run in a Newcastle heat of the Provincial Midway Championship, while Oxford Vision will be aiming to break through at his third start in the 1350 Provincial and Country Maiden.

The first of eight races gets underway at 12.55pm.