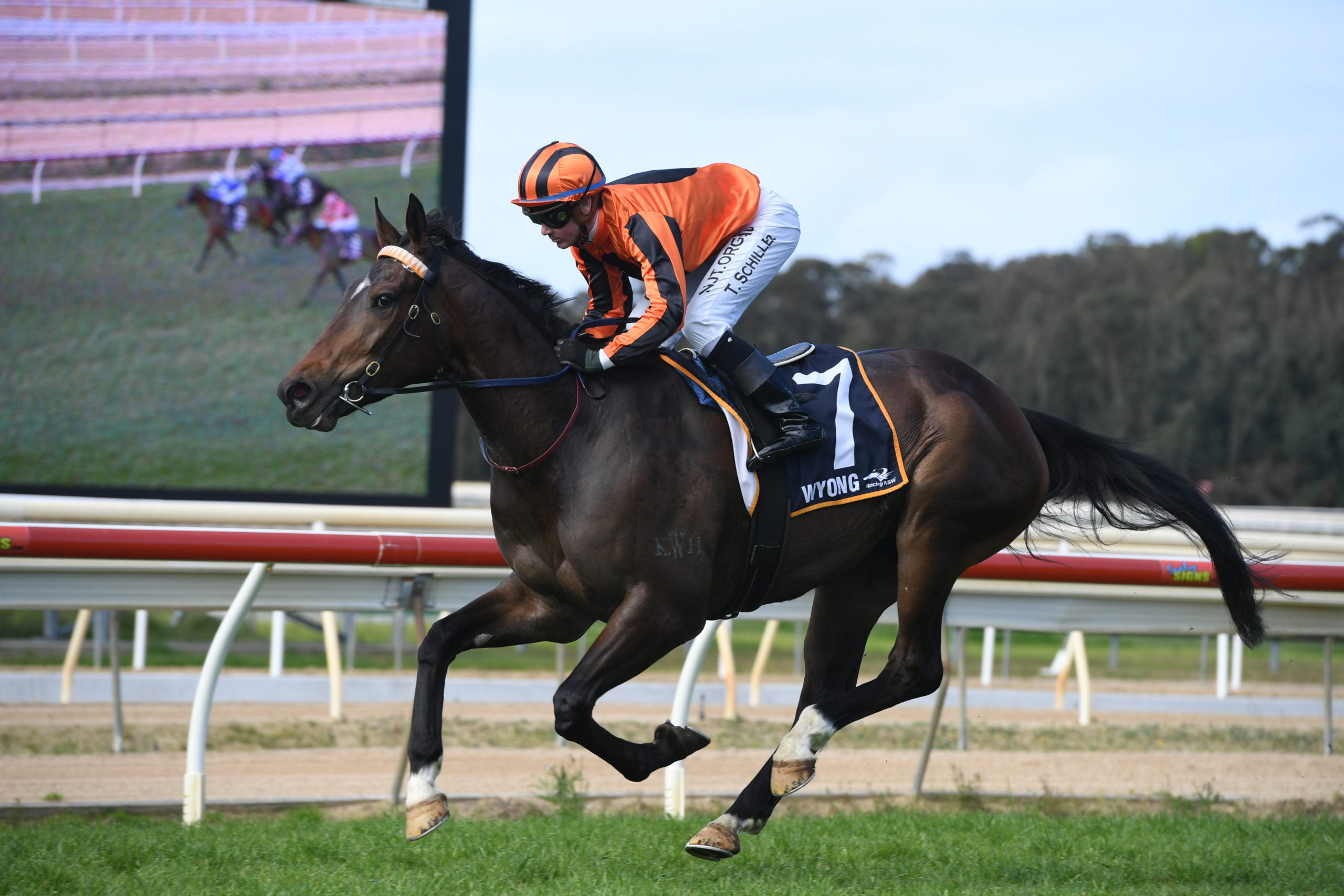 Mark Newnham was hoping to end the 2019/2020 season on a high and did just that with a winning double.

Newnham has had his best season in his four years of training, with the Wyong double bringing his tally to 68.

He had been confident of the chances of his two runners, Malfy and Sweeping Brook, leading into the meeting and that confidence paid off.

Both horses looked well-placed and Newnham’s apprentices Tom Sherry and Tyler Schiller did the rest, posting victories for their boss.

It was Sherry’s 14th win on the Wyong track for the season, securing him the Apprentices Premiership Title.

“It was great to finish off the season with a couple of winners and it all starts again tomorrow,” Newham said.

Malfy was the first of stable’s winners taking out the DE BORTOLI WINES MAIDEN over 1600m.

There were some anxious moments in the straight as the Dundeel filly attempted to run down the leaders, but she responded to hard riding by Tom Sherry and grabbed victory on the line.

Sherry had positioned the short-priced favourite midfield, getting onto the back of the leaders at the turn.

The Perry trained Rainbow Man looked likely to cause an upset, but despite laying in the in the straight, Sherry was able to get Malfy home by a half-length.

It was the second start for Malfy, coming off a fourth at Hawkesbury over 1300m on debut and Newnham had been confident she would race well.

“She came through her first run really well and with the step up to a mile I thought she was well placed,” he said.

“I was pleased with the way she paraded today,” he said. “In her first start she got upset and it was hard to get Robbie (Dolan) on her.

“Today with early muffs on and with the pony, she was nice and relaxed. “Since her last start she appreciated having her work lengthened out a bit and I thought the mile would suit her.”

The second of Newnham’s runners, Sweeping Brook, was sent out a short-priced $1.70 favourite in the NSW JOCKEYS ASSOCIATION 3YO MAIDEN over 1350m and didn’t disappoint.

Despite being posted three-wide for much of the race, Schiller didn’t panic, bringing the three-year-old to the front on straightening and drawing away for a three and a half length win.

Newnham had tinkered with the gear on the gelding, taking off the blinkers.

“He’d finished second in both his previous starts and seemed to be getting to the front and waiting for them.

“I thought he was well placed, with 1350m the right trip and three kilos off for Tyler.

“He’s always shown a bit of ability and was nice to knock off a maiden win.” with him now and give him a bit more time.”

David Pfeiffer and Mitchell Bell had a good day out, combining for a winning double with Jacquine Reward and Coco Cuber.

The well-supported Jacquine Reward ($4.40) proved too strong for his opposition to take out the HAPPY 50TH MICHELLE CLASS 1over 1200m.

The Reward For Effort three-year-old was coming off a fourth at Nowra over 1100m on July 3.

Bell settled the gelding just behind the leaders and despite being caught wide, had him travelling strong on the home turn.

He dashed away in the straight to win by a length over the $2.60 favourite Belitsa, from the Snowden yard.

Heza Gentleman ($18), trained by Mitchell and Desiree Kearney, was third.

Stablemate Coco Cuber ($15) caused an upset in the 1100m JOCKEYS CELEBRATION DAY BENCHMARK 64 with an impressive length and a half win.

The Rubick gelding was coming off a last race start at Wyong over the same distance on July 21, when he finished almost four lengths behind the winner in seventh.

Bell settled the three-year-old midfield, before moving up just before the turn.

An $85,000 yearling, Coco Cuber has now had eight starts for two wins and a placing.

It looked like a race in two and proved to be exactly that with Garrison and Eye See Things fighting out the finish of the 1100m COCA-COLA 3YO&UP MAIDEN.

The Snowden trained Garrison ($2.30), ridden by Brenton Avdulla, got the edge in the final stages, to win by almost a length.

Both look like progressive three-year-olds and seem likely to be headed for metropolitan racing.

Avdulla, box seated on Garrison, before drawing level with the $2 favourite Eye See Things, from the John Thompson stable, on the turn.

The pair battled it out down the straight before Garrison got the upper hand.

Lindy Ings, representing the Snowdens, said it was very satisfying to finally get a win.

“It’s a great result for the team, Peter and Paul, and everyone who has been involved with him,” she said.

“He’s a big, robust horse and has had niggling injuries right through his career.

“There’s been a fair bit of work to get him here, but it was great to get the win.

“He wasn’t beaten far last start at Newcastle, but he was much better today.

“The win today will be good for his confidence.”

Enamour ($11) trained by Tracey Bartley, was seven lengths behind, in third.

Craig Carmody paid tribute to the ride by Kathy O’Hara after Buzz made it back to back wins in the TAB.COM.AU BENCHMARK 64 over 1350m.

The Denman gelding was coming off a win at Wyong over the same distance on June 18.

In his two previous victories Buzz had been ridden on the pace, but when favourite Al Snip opened up an early six length lead, O’Hara made the decision to restrain him.

It proved to be a winning move, with Buzz circling the field on the turn and running down the leaders in the straight to win by almost three lengths.

“That was quite a run of emotions,” Carmody said after the win.

“Usually his best runs are when he is up front, but Kathy summed up the situation and the win is probably dedicated to her wise move.

“She summed it up really well.

“It’s nice to see him race with consistency this time in. He’s been honest and deserves the win.

“He’s been up for nine months but is thriving on routine and training. Initially he was quite a fragile customer but has thrived this time in, so we’ll keep him going.”

Cameron Crockett saddled up his first winner at Wyong, with consistent mare Now Or Never getting a well-deserved victory in the GREAT NORTHERN ON TAP 4YO&UP MAIDEN over 1350m.

Now based at Scone, Crockett has only had a handful of runners at the track and was happy to break through for a win.

Jason Collett gave the All American four-year-old a gun ride, positioning her midfield in running before hitting the front on straightening and drawing away in the final stages to win by more than two lengths.

Now Or Never, raced by Darby Syndications, was well supported on the back of two good runs at Muswellbrook and Dubbo this time in, and sent out $2.60 favourite.

Previously trained in Sydney by Gary Portelli, she had showed early potential finishing fourth in the Gimcrack and sixth in the Inglis Classic, beaten only two lengths.

She has raced well since joining the Crockett stable, with three placings from eight runs.

In her breakthrough Wyong win she beat the Lauri Parker trained Haunting Spirit ($3), with Badge Of Honour ($231) from the Cheers stable, a close third.

Back to back Wyong wins for the Waterhouse/Bott trained Vienna Rain, who took out the 1600m WYONGS NEXT RACEDAY SUNDAY AUGUST 30 CONDITIONAL BENCHMARK 70.

The Manhattan Rain gelding was sent out $3.00 favourite and didn’t disappoint, with Adam Hyeronimus giving the three-year-old a well-rated ride on the pace.

Vienna Rain jumped well and Hyeronimus settled him just off the leader.

He hit the front on straightening and was able to hold out his rivals to score a two-length win.