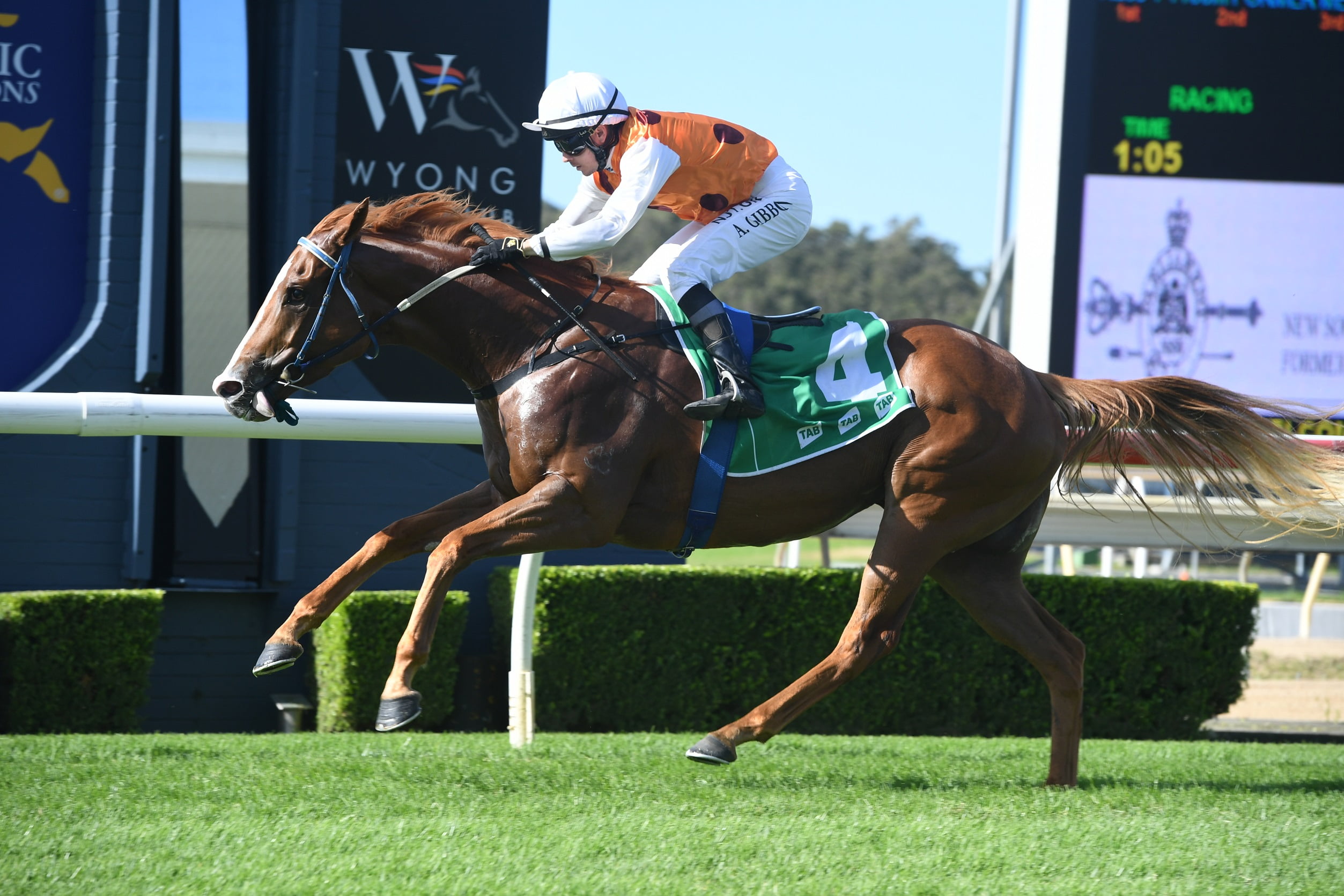 TALK about keeping it in the family!

They didn’t have to oppose one another, and emerged as the starring act at Wyong today.

Leading Newcastle jockey Andrew Gibbons and his talented apprentice son Dylan had only one ride each on the seven-race program, and came away celebrating a special double.

Gibbons led throughout on locally-trained VIBRANT ($2.80) in the opening event, the Former Members of NSW Parliament F&M Maiden Handicap (1100m).

The younger Gibbons had to wait another six races, then turned in a repeat performance, also making the running and getting the cash on topweight MOMACK ($4.20) in the closer, the Central Coast Coolrooms Benchmark 64 Handicap (1600m).

Popular Sydney trainer Bob Pearse was back in the winning list for the first time since November, 2019 when CURTIS ISLAND ($4.80) shed his maiden status in the Real + CG&E Maiden Handicap (1100m).

Pearse has trained at Randwick since 1985, and has wound back his team in the last few years and now has only two horses in work.

“The most I ever had was 17 horses and generally averaged around 12 in work,” Pearse said.

CURTIS ISLAND, raced by New Zealander John Thompson, who splits his time between Queenstown and Sydney, is a son of 2015 Doncaster Mile winner KERMADEC; hence his name.

Curtis Island is a volcanic island in the South-West Pacific, and belongs to the Kermadec Islands, an outlying island group located halfway between New Zealand and Tonga.

Course curator Phil Roberts earned plenty of plaudits for the manner in which the track played, starting out as a “Soft 7” after rain fell yesterday and being upgraded to a “Soft 6” midway through the meeting.

PUNTERS weren’t roaring with delight after heavily backed odds-on favourite PRESSITA ($1.85) couldn’t run down trainer Allan Denham’s filly VIBRANT, who eased to start at $2.80 as a result of the support for the former. This was her first win at her sixth start, and she keeps improving. PRESSITA was diagnosed as a “roarer” and underwent tie back surgery to correct the problem. She had been placed at four of her previous five runs and began awkwardly at her resumption. She will take improvement from today’s run. The winner is owned by George Altomonte’s Corumbene Stud, and is a daughter of twice Sydney winner, the Galileo mare Brightest, who was prepared by the late Guy Walter.

PUNTERS again were on the wrong end of the stick when the Gai Waterhouse/Adrian Bott debutant CROSSCUBE ($9.50) upset his more fancied stablemate JIMMY’S DREAM ($2.25 favourite). A $320,000 yearling purchase at the Gold Coast in 2019, the winner was always in control under apprentice Campbell Rawiller and was never in danger once he shot clear on straightening. Ironically, JIMMY’S DREAM was bumped by his stablemate on jumping away and was inclined to lay in under pressure in the home straight. A post-race vet examination of $4.40 chance HIGH TRIBUTE, who finished last of the eight runners, revealed she was coughing, and Racing NSW stewards will follow up on her post-race condition.

RANDWICK trainer Bob Pearse had an interesting tale to relate after CURTIS ISLAND broke through at his seventh start. Pearse took his 1998 Newcastle Gold Cup winner JOSS STICKS to Brisbane for the Group 1 Doomben Cup the following year when he ran third to INTERGAZE and LAHAR (later a dead-heat third in that year’s Melbourne Cup).

“John Thompson raced LAZAR and rang me out of the blue after the Doomben Cup, and offered me a horse,” Pearce said. “He has had a horse with me pretty well every year since, so it was nice to win another race for him today. CURTIS ISLAND is still raw and improving with every run.” The winner’s dam POLYGAMIST is a daughter of Thompson’s 2000 Caulfield Cup winner DIATRIBE. Rachel King had CURTIS ISLAND up on the pace and he was too good for $2 favourite SELHURST PARK and SLEIPNER ($5).

PATRICK Scorse’s return to Wyong – where he won at his first ride at the track three years ago and is now apprenticed to local trainer Tracey Bartley – didn’t end well. He rode second favourite KISS SUM ($3.80), who began awkwardly and lost ground, and settled further back than anticipated. Scorse later pleaded guilty to a careless riding charge for allowing his mount to shift in near the 150m when not sufficiently clear of ROYALZEL (8th at $5.50), which had to be steadied and lost its rightful running. KISS SUM finished fifth and can be given another chance. PARK AVENUE ($11) made a successful debut, diving through near the inside in the straight and narrowly holding out another first starter DEFICIT ($3.50 favourite). DECISIVE MOVE ($6.50) was always in contention and battled on well for a close third. The winner fetched $220,000 as a yearling at the Gold Coast last year and would have been unlucky not to win as he was held up momentarily at a crucial stage near the 100m.

GOSFORD trainer Kylie Gavenlock has a smart horse on her hands in CREAM RISES ($2.90 favourite), who made it two wins from as many starts. The John Singleton-owned beautifully-bred three-year-old (Fastnet Rock – More Strawberries) won on debut over 1100m on his home track on Anzac Day and turned in another excellent performance to overpower DUCHESS ($4.40) and BEAUCHAMP ($18). Gavenlock described him as “not the sharpest tool in the shed”, but said the three-year-old was continuing to learn and getting better all the time. A hat-trick is definitely not beyond him, and he gives the impression of being even better suited on bigger tracks.

A confident long-priced plunge on runner-up WILD CHAP ($26 to $6) almost came off. The Kembla Grange-trained four-year-old had won at Wyong last August and finished second at the same track in November. He had no luck at his previous run when unplaced on his home track on April 17 and gave his backers a great sight when he made the running, but couldn’t quite hold off Chris Waller’s three-year-old filly CENTIMENTAL ($9), who began awkwardly but was still good enough to overcome that. Rider Josh Parr could offer no tangible explanation for the disappointing performance of favourite VANDERLAND (8th at $4.40). Stewards will follow up the gelding’s post-race condition in coming days.

DYLAN Gibbons took bad luck out of the equation by taking MOMACK ($4.20) straight to the from his outside draw and dictated terms. Despite his 59kg after the lad’s 3kg claim, he found plenty when challenged approaching the home turn by runner-up LADIES’ GEM ($10).

“I didn’t think he had much left when the second horse poured the pressure, but he found a bit,” Gibbons said. “I thought we were in a bit of strife, but he changed legs and found again.” Gosford trainer Angela Davies missed MOMACK’S victory as she woke up this morning with severe toothache and wasn’t well enough to attend the races.