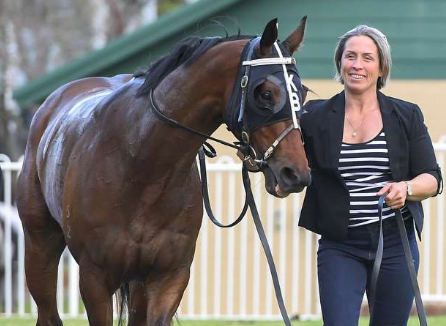 Kristen Buchanan is hoping for an Oakfield double when she saddles up two runners at Thursday’s Wyong meeting.

Three-year-old filly Oakfield Arrow will have her final run this preparation in the 1350m Fillies and Mares BM64, while stablemate Oakfield Cherokee steps up to the 2100m in the Class 1 and Maiden.

Buchanan believes both runners will be very competitive and continue a good late season run for the stable.

The stable has had four winners in May and with 22 wins to date is closing in on last season’s total of 24.

“It’s been a nice run and hopefully it can continue. Our strike rate is back up where it should be, so I’m pleased about that,” she said.

“My goal is to beat my best strike rate, so I’ll need about 20 percent winners and close to 40 percent placings to do that.

“I always aim for around there because if you are hitting those kinds of goals, you are doing a really good job of placing them.”

Buchanan has her eye on a Provincial Championship campaign with Oakfield Arrow, who finished strongly at her last start at Scone over 1300m on May 14, beaten only half a length.

“Oakfield Arrow is a really nice filly. She will finish out this preparation and come back much stronger next time around.

“I am anticipating her running a really good race on Thursday. I’m looking forward to getting her out to the 1350m, with the home track advantage.

“I think her last race at Scone was quite a strong field, but I don’t think that’s what got her beaten.

“She just did a little duck in at the top of the straight and kind of cost herself and then had to sustain a long run. I thought all things considered there was a lot of merit.”

Buchanan believes Press Statement three-year-old will get over more ground next preparation.

“I’ve got her earmarked as a possible Provincial Championship contender next season. She’ll have to join a few dots before then but she’s just ready-made and doesn’t do a lot wrong and is quite versatile.”

Oakfield Cherokee runs over the 2100m for the first time, but Buchanan believes the Savabeel gelding will have no problem with the distance.

He hit the line strong when beaten half a length at his last start at Newcastle on May 18 over 1600m.

“He’s generally a horse I like to have on a big, roomy track because of his running style but Wyong ridden the right way can still work for him,” Buchanan said.

“He’s not a horse you can stir up early to be in a closer position because he’ll over race. You’ve just got to let him get comfortable and do his best work late.

“I don’t think the trip will be a problem at all. I’m more concerned with the early tempo, which could present a bit of a challenge.

“I’d love to have some speed on which would be a big help to us. You need to save all his petrol for a last crack at them and you need to chime in at the right time at Wyong.

“I think he’s a really nice horse who is still learning how to race. He’s well-bred and has a lot of potential as a stayer.”

Aaron Bullock will partner both horses, having previously ridden them in trials.

The first of eight races gets underway at 12.10pm.