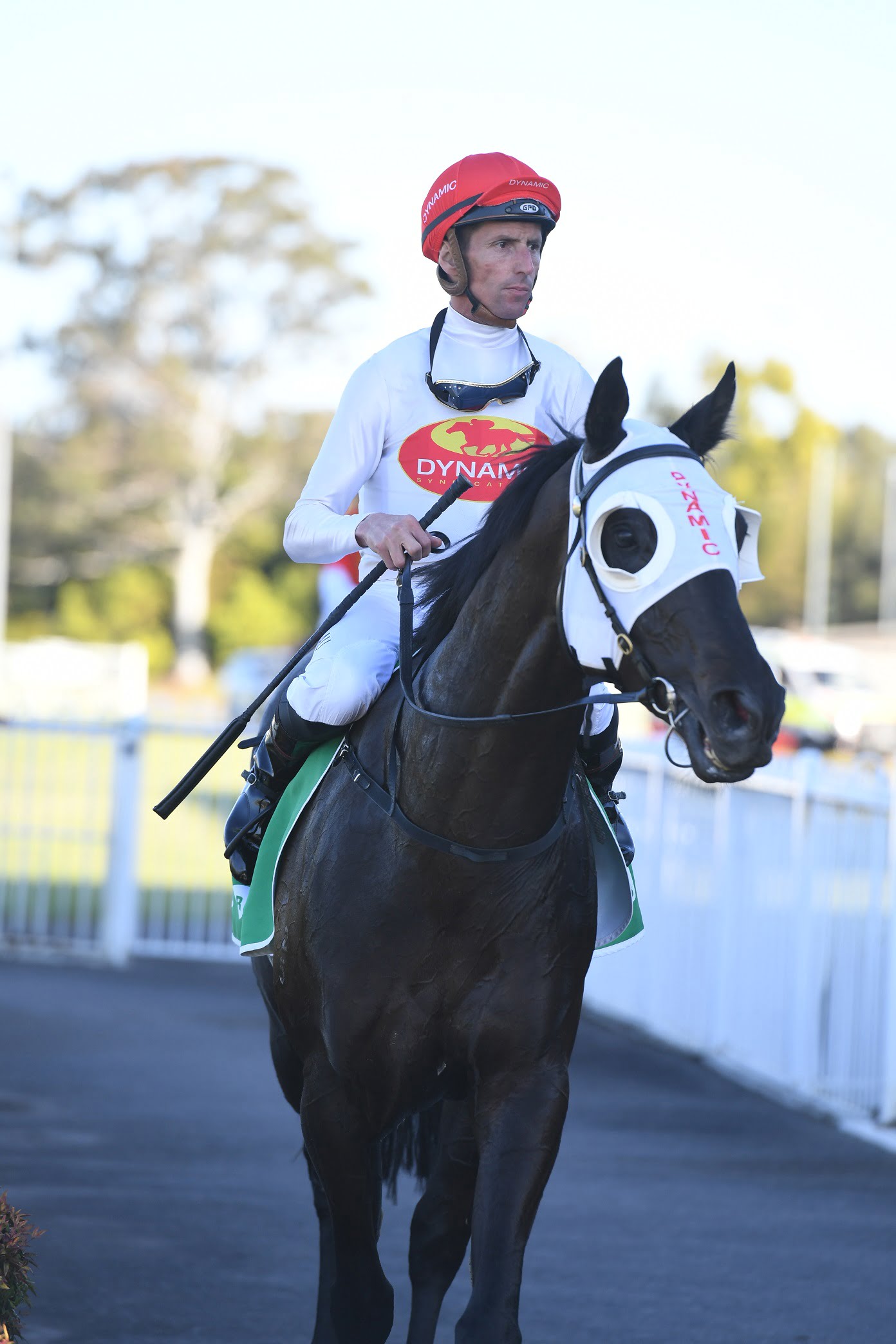 The Americain gelding outstayed his opposition over the 2100m, courtesy of a great ride by Rawiller and a well-planned preparation by the stable.

The 2019 Bong Bong Cup winner, raced by Dynamic Syndications, broke his maiden at Wyong in May last year over 1600m and has continued to improve as he steps up in distance.

“Gai and Adrian had him spot on today,” stable representative Neil Paine said.

“It turned out perfectly today.

“The way Nash rode him today was an absolute treat.

“What a terrific treble they are.”

Paine said it was a tough performance by the five-year-old.

“He carried 59kg and everything else was around the 55kg or less. It really was a tough win.

“This horse has just realised his potential. He is getting better and better with each campaign.”

Paine was unsure if the stable would push on to Friday’s Carlton Draught Wyong Gold Cup, with the victory earning Frenzied automatic entry.

Gai Waterhouse combined with Nash Rawiller to win the Wyong Cup in 2012 and 2008 with Julienas and Bianca, respectively.

Frenzied, a $85,000 yearling, started $2 favourite in the Cup Prelude and led all the way, with a beautifully rated, front running ride by Rawiller.

It was a race in two in the straight with Frenzied holding out Prince Of Arragon ($2.60) trained by Stephen O’Halloran, with Itsa Fait Accompli ($61) from the Daniel and Rocky Simonetta stable, third.

The Mark Newnham trained gelding defied a strong betting drift to score his third career win at start 11 over the 1600m.

The Smart Missile mare pinged the gates, allowing Dolan to ease her to the front from the outside barrier.

He settled her in the lead and was able to control the pace, drawing away to win by half a length, holding out the fast finishing local galloper Ondo Pasa.

Elon caused an upset in the COCA-COLA CLASS 1 over 1600m, giving a welcome boost to Warwick Farm based trainer Gary Nickson and his family.

Nickson’s wife, an owner in the Exceed and Excel gelding, is currently being treated for cancer.

It was the first leg of the winning treble by Dolan.

Stable foreman Mark Galea said the win would mean a lot for the Nickson family.

“Gary’s wife is crook at the moment with cancer and this will give her a good boost,” Galea said.

“The horse has been working good and we thought she’d win today.”

At $16, Elon was the second outsider in the small field, but defied his odds to score a narrow win, courtesy of a great ride by Dolan.

He took the four-year-old to an early lead, dictating terms throughout.

Despite looking under pressure on the turn, Elon fought on to hold off the fast finishing Grand Acheva ($9) to win by a long neck.

The John Sargent trained Elizabeel defied a better drift to take out the 1200m TEAM THOROUGHBRED NSW 3YO MAIDEN, securing a double for Robbie Dolan.

The three-year-old filly, by Great Britain sire Power, had been racing in metropolitan grade in her past three starts, with two seconds and a third to her name.

She was coming off a second on a heavy track at Canterbury over the same distance on August 19 and looked like a major contender in the Wyong race.

Dolan settled Elizabeel ($3.40) just behind the leader and $2.50 favourite Wuddacuddashudda, drawing level in the straight before pulling away in the final stages to win by more than a length.

Sargent has had a good opinion of the filly and believes she will get out over more distance.

He said she had been “knocking at the door” in her previous runs.

“I think she’ll get out to a mile or more later in her career,” he said.

Jockey Keagan Latham was able to get the best out of Miss Japan in the final stages of the TAB.COM.AU PROV & CTRY MAIDEN, with the mare claiming victory in a head bobbing finish.

Trained by Stephen O’Halloran, for Waratah Thoroughbreds, the four-year-old was coming off a poor performance on her home track at Goulburn, where she finished a long last in a field of nine.

Punters were forgiving and Miss Japan was sent out $4 second favourite and didn’t disappoint.

Latham settled the mare midfield in the 1600m race, bringing her to the outside in the final stages of the straight where she was able to run down the Peter Cheers trained, I Am Flying ($13) to win by a short half head.

The $2.50 favourite Stark, from the Widdup stable, was a length behind in third.

“I’m really happy with that performance from her, particularly coming off a bad run last start,” O’Halloran said.

“I put that down to a very heavy track. I think she appreciated getting on the better ground and she put in right on the line.

“She’s obviously a good grown horse but there’s not much of her. I think she’ll get over more ground. She’s bred to do so.

Miss Japan was O’Halloran’s first runner at Wyong. The long-time Waterhouse/Bott racing manager took on the job as head trainer for Waratah Thoroughbreds, earlier this year.

A strong ride by the in-form Jason Collett secured victory for Numbers Game, a debutante from the Bjorn Baker stable.

The New Zealand bred four-year-old only arrived in Australia last month and has wasted no time in stamping himself as a gelding with a future.

Collett gave the Per Incanto gelding a great rails run, after settling him just off the speed in the early stages.

He stuck to the rails in the straight and responded to hard riding by Collett, to win the TRACSIDE AUTOMOTIVE 4YO&UP MAIDEN over 1100m by half a length.

“It was definitely a good start to his career,” racing manager Stephen McLean said.

“Full credit to Mickey and Lauren Brennan in NZ. He arrived in great order six weeks ago.

“We came here with a bit of confidence and he didn’t disappoint.”

“I don’t think he had it easy in any part of the race. Jason had to use him early to hold his position. It was really good to see him get the job done today.”

beat Maccomo ($12) trained by Joe Pride, with stablemate Oslo, the $1.85 race favourite, a length behind in third.

Trained by Adam Duggan, the Mossman mare was resuming from a spell.

She was sent out the $2.25 favourite and didn’t disappoint with jockey Tim Clark settling her just behind the leaders.

She came to the outside on straightening, going on to win by a length.

It was the fourth career win for the promising four-year-old from just five starts.

She was narrowly beaten on debut at Muswellbrook, before stringing together two successive wins at Taree and a home track victory at Gosford.

She trialled impressively at Gosford on August 3 and looked primed for a good first up performance.

She beat the Tony Ball trained Boom Queen ($13), with Crackneck ($17) from the Allan Kehoe stable, a close third.

Graham booted home a double at Kembla on Saturday, including Delileo for the Brett Lazzarini stable.

The pair combined again at Wyong with Wild Chap and were again in the winner’s circle.

It was a great, front running ride by the apprentice, who dictated terms in front drawing two lengths clear of her opponents on straightening, maintaining the margin to the post.

He was coming off a second at Kembla on August 6 over the 1200m and responded well to the freshen up.

Lazzarini had been confident leading into the race.

“He is lightly-framed so you can’t get a lot of work into him but there is plenty of ability there.