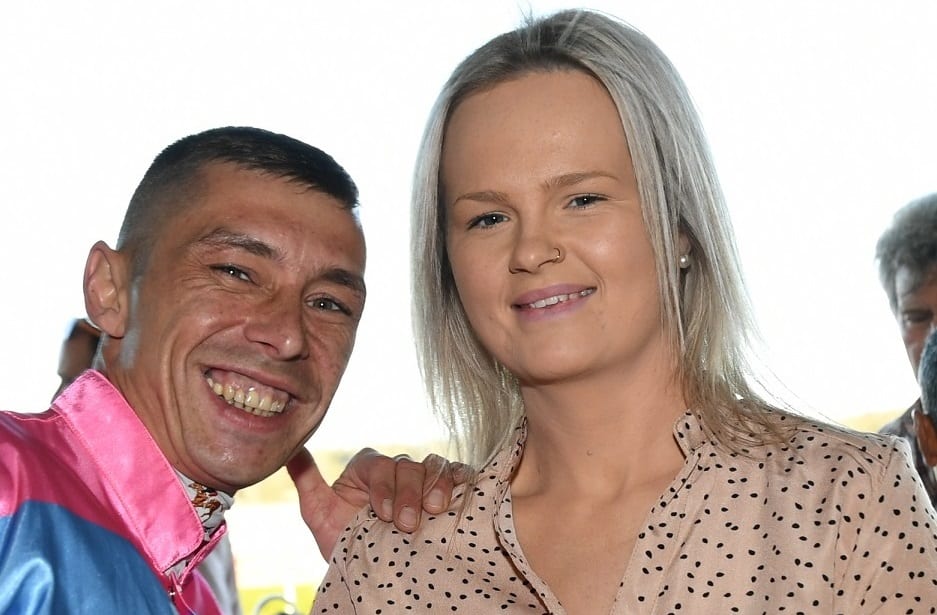 There were emotional scenes in the winner’s circle when the Denim Wynen trained Dual Escape ($14) took out the HAPPY 60TH STEVE REECE BENCHMARK 64 giving the young trainer her first victory.

Wyong-based Wynen, 23, only recently took over the care of the Dubleo mare but had been reasonably confident going into the race.

“I’ve had about eight runners before but this is my first win and great that it’s at the provincials,” she said.

“It’s a day I won’t forget in a hurry, very exciting. I’ve had this horse for six weeks now. The owners wanted to lease her so I took out an owner/trainer licence.

“She’s been going really good and has the ability. It was good to have some luck with her today.”

“Denim has done a good job with the mare, she was spot on today.

“I’ve ridden this mare in races and trackwork plenty of times, I know her well.”

Lisnyy had settled Dual Escape mid-field, peeling to the outside on the turn, before storming home to claim a length and a half win.

Kris Lees stable could have as many as four runners in Friday’s Listed Wyong Carlton Draught Gold Cup after Milseain took out the Cup Prelude ridden by Louise Day.

Lees has already indicated Sixties Groove, High Opinion and Mongolian Wolf will be likely Cup starters and with Milseain has now earnt automatic entry in to the $160,000 race.

“Kris will wait and see how she pulls up before deciding if she will start,” stable representative Cheree Marsham said. “Today was her day. She had the track and distance to suit her and she got the job done.

“It was a great ride by Louise. She rated her really well in front and got her to sprint when she needed to.

“She will win more races on that for sure.”

Louise Day said Milsean was a real “mud lark” who appreciated the conditions.

“The plan was to try and lead, keep in an even rhythm and skip away on the bend. I could hear them breathing down my neck the whole way but she did well she’s tough.”

Milsean ($2.50fav), who brought up her fourth career win from 18 starts with the victory in the 2100m CARLTON DRAUGHT WYONG CUP PRELUDE – CLASS 4, beat the fast finishing Equipped ($5) from the John Sargent stable by a half-length, with He’s Imposing ($2.30) trained by Joe Pride, four lengths behind in third.

The win capped off a big day for the Lees stable, who also took out the first four races at Moree’s Cup Day.

Nash Rawiller wasted no time getting back into the winner’s circle on his first ride at Wyong in more than five years.

The Orbis Bloodstock gelding was an impressive two length winner, after being taken to an early lead by Rawiller, and drawing away in the straight to win by two lengths.

Rawiller said Sebonna, who was a $250,000 yearling, was still learning his craft.

“He’s a lovely horse but very raw. I elected to try and lead, just through riding him to the gates, I thought that would be the best place to be.

“He didn’t really get around this track too well so there is plenty of improvement to come,” he said.

Waugh agreed Rawiller’s decision to roll forward had been the right one.

“I think he needed to do that. He’s been a bit slow out and is still learning. Even when he hit the front, he was a bit lost and a bit all over the place, but he’s getting there,” she said.

“He’s still got a bit to learn but when he learns to race true and correct, he will be a nice horse.

“I’ll look for a similar race for him. He will get over more ground, but I’ll probably run him again over a mile.

“I’ll just see how far he goes this time in because he’s improved so much from last preparation and I think he will improve a lot again in his next preparation.”

The Dream Ahead mare was coming off a short back-up at Newcastle on August 24, when she was narrowly beaten in third.

Rawiller had intended to take a sit on the four-year-old but elected to lead when there was no early speed.

He maintained the front throughout, holding out the fast finishing Sethlans, to win by a long neck.

“She got through it and got the job done. We didn’t really want to lead either, but we will take the win,” Pride said.

“She’s a very honest mare and has been luckless in a few of her starts, so it’s good to get the maiden out of the way.

“She will probably go for a little break now, this is her fourth run. She has to strengthen up a bit and time will do that for her.”

Pride was full of praise for the Wyong track, saying it was a credit to the club for the meeting to go ahead

Rawiller said he had intended to get a bit of cover for the mare, but circumstances dictated he take her to the front.

“No one wanted to lead so I thought I will. She bottomed right out there the last 100m but she’s a really lovely mare and has a good turn of foot.

“You can expect more of her next time in.”

Stewards found interference on the home turn caused the $2 favourite the race and relegated the first across the line, Cosmic Reign ($7) trained by Stephen Gleeson, to second.

The win also brought up a double for Josh Parr.

Paulo Pace, an Epauette gelding, brought up his second win from seven starts with the victory.

“He’s a good strong horse and I thought he would relish the sting out of the track today,” Pride said.

“I thought he would get on pace favours, which he did today, and be hard to beat.”

Jockey Kathy O’Hara settled the colt mid-field before circling the runners on the turn and drawing away in the straight to win by more than a length.

“He’s still doing a lot wrong and was a bit keen off the slow tempo. He still doesn’t quite know how to put them away but it’s good to get the maiden out of the way.

“He’s got raw ability but when everything falls into place, he could be an autumn horse.”

Mo’s Crown did everything wrong when narrowly beaten at Hawkesbury last start and has now had a win and a placing from five starts.

Gerald Ryan’s decision not to scratch his mare Zourhea ($5) proved a winning one, with the four-year-old taking out the STAR 104.5 LA GIOCONDA – F&M CLASS 4 over 1600m.

Ryan had been worried about the heavy track conditions but Zourhea put paid to those concerns scoring a narrow win, with Jay Ford in the saddle.

She finished strongly down the outside, hitting the line with Tricky Gal ($2.40fav), the judge called upon to decide the winner.

“She’s had three goes now second up for three wins. She’s done well for a cheap horse. She is a half-sister to Harper’s Choice and has won over 1800m in the past.

“I’ve always had a bit of time for her and I think she’ll be even better as a five-year-old.” Ryan said he would target a race Stakes mares race in October over a mile for Zourhea.

“I think she deserves a throw at the stumps so we will probably go that way.”

Luddenham Lass ($6) trained by Jeff Englebrecht, was a length behind in third.

A race to race double for the Ryan stable with Jarhead ($7) proving too strong for his opposition in the 1600m HAPPY 70TH BIRTHDAY GARRY DIETRICH CLASS 2.

The Warhead gelding is a Wyong specialist with two wins and three placings on the track from as many starts.

“She loves it here this horse,” Ryan said.

“I came here fairly confident. I thought he would improve off the Newcastle run. I stepped him up to 1500m pretty quick and he had improved off that.

“He’s had a couple of weeks to get over it. He’s only a little fellow but he’s doing a great job.

“He’s come back a little bit stronger this prep and he certainly has a go. He has improved with each run this preparation so hopefully that can continue.

“I think he can get up around the 2000m so we will head towards that.”