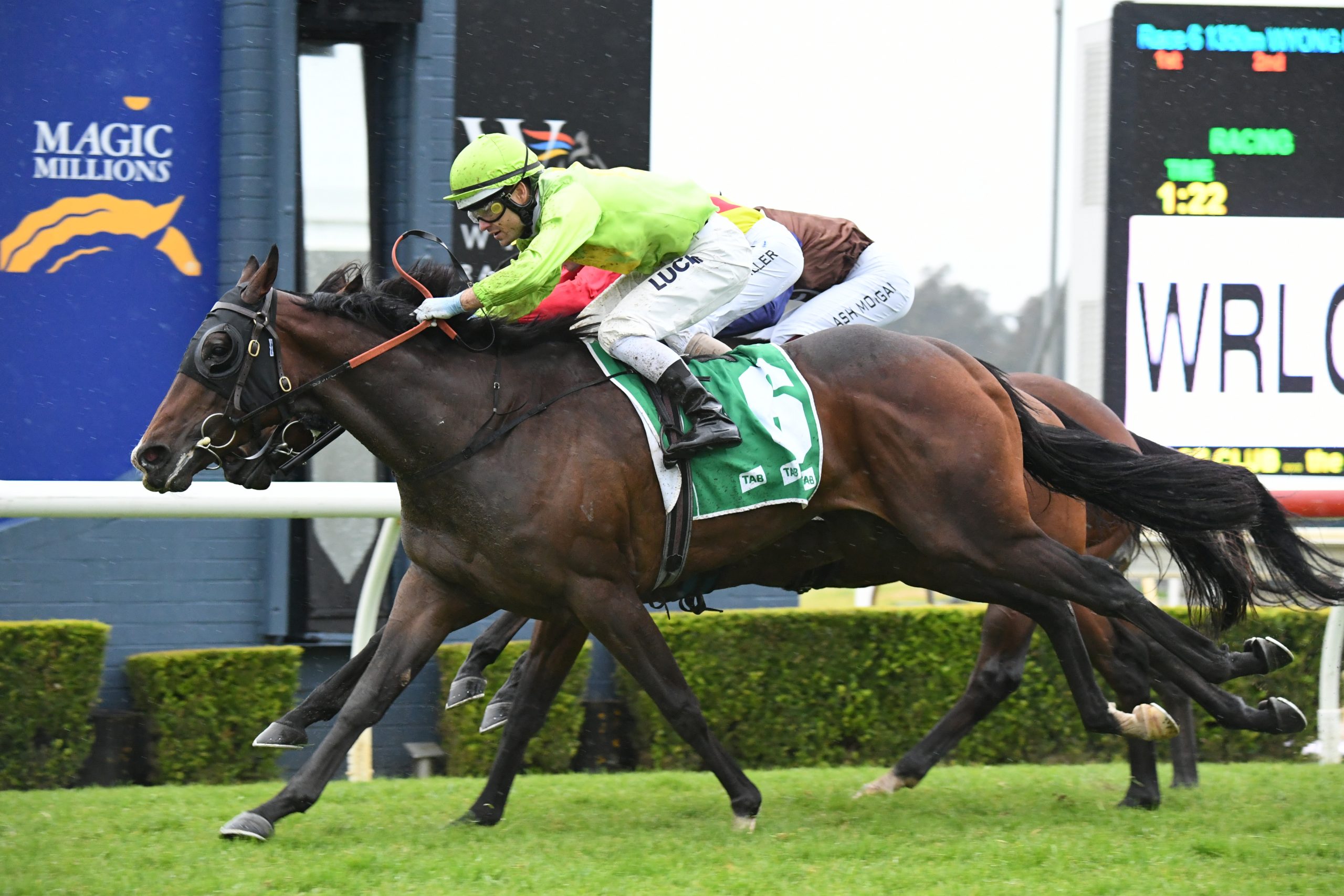 Kristen Buchanan carried the flag for the locals on a day of competitive racing at the Wyong Roos Foundation Race Day.

Buchanan has her eye on a Provincial Championships campaign for her progressive filly Oakfield Arrow, who brought up her second career win from start six in the 1350m Fillies & Mares BM64.

The track held up well under consistent drizzle and there were several impressive winners with Gary Moore’s Light Up My World scoring a dominant five length victory over 1600m.

Gary Portelli’s long and successful association with Elite Thoroughbreds continued with Walkin’Talkin’ breaking through for his debut win.

Portelli trained the gelding’s sire, I’m All The Talk, a winner of the Group 3 Skyline in 2013 and has four of his progeny currently in his stable.

Elite Thoroughbreds purchased Walkin’Talkin’ for $45,000 at the Perth Magic Millions sales and look to have made a good investment.

Portelli said I’m All The Talk, who stands in Western Australia, is one of the leading second season sires in Australia.

“I really liked him when I trained him, and he seems to be doing very well as a sire,” he said.

“I was pretty confident coming here today. He was coming out of a very strong race last start.”

Walkin’Talkin’ debuted at Scone on May 14, finishing fourth over 1000m.

“He got the wobbles when he got to the front that day. He was three deep most of the way and wasn’t quite there on the day.

“I was impressed with the turn of foot he showed today. I was little concerned with the slow tempo but when Rachel (King) asked him to quicken she had some horse there.

“I liked the way he went through the line and think he will be better when he gets up to 1100m to 1200m. He’s got a motor and he’s got ability and it’s great to get another winner for Elite.”

King settled Walkin’Talkin,’ the $1.95 favourite, just behind the leader hugging the rails, taking the lead on straightening, and drawing away to win by almost two lengths.

Tracey Bartley’s Compassionate ($3.50), who had a wide run throughout, was second, with the fast finishing Buckin’ Rippa ($11), from the Damien Lane stable, third.

Comonic continued a winning week for Scott Singleton and Jay Ford, the Nicconi gelding bringing up win three for the combination.

three days later at Wyong with Comonic, a three-year-old having his third race start.

Ford took luck out the equation, leading on Comonic throughout. He looked to be

cruising coming to the turn and drew away to win by a length.

Ford was full of praise for Comonic, believing he will go on to win better races.

“His future is pretty bright long term and it’s good to knock the maiden out of the way today,” he said.

“This fellow is only lightly raced but going really well. He ran a good second the other day at Gosford and today was his day to break through.

“He’s very natural in what he’s doing but at the same time he’s pretty green.”

Comonic was the second favourite of the day to win, having started at $2.40.

He beat Nick Mitchell’s Miss Checkoni ($31) who was eye-catching on debut, with

Gary Moore had Queensland Oaks aspirations for his filly Light Up My World who was a dominant five length winner over the 1600m.

The Toronado filly, a $42,500 yearling, was having her third start for the stable and her fourth career run.

Moore had intended on targeting the Queensland Oaks but ran out of time and decided to keep the three-year-old racing in NSW.

She was second at her last start at Hawkesbury over 1500m on May 20 and really hit her straps at Wyong, blitzing her opposition in the final stages.

Tim Clark had positioned Light Up My World just behind the leader, hitting the front on the point of the turn and drawing away to the line.

James Moore, representing the stable, said it was good to see the filly put it all together.

“We were initially aiming her towards the Oaks at Queensland but probably got her a little late to rush her into that target.

“She put it all together today. She’s a lovely filly, great to do anything with, very relaxed and bred to get 2000m to 2400m so there will be bigger plans for her.”

Light Up My World earned strong late support and was sent out $2.35 favourite. She beat Mark Newnham’s Angela Sistina ($2.40), with $101 longshot Minneapolis, trained by Colin Besters, putting in a much-improved run to finish third.

John O’Shea looks to have a promising stayer on his hands with Comme Bella Fille ($1.90) who continued a good day for favourites.

The daughter of Complacent made short work of her opposition, courtesy of a confident ride by Tommy Berry.

He settled the three-year-old mid-field, taking off just before the turn and hitting the lead on straightening.

He was able to ease up in the final stages and still record a convincing win.

Comme Bella Fille did her early racing in New Zealand where she recorded a win at Matamata, before being purchased by OTI Racing and transferred to O’Shea.

Stable foreman Tom Charlton said they had a good opinion of the filly.

“She’s going for a break now and will come back in the spring. I think she will have a lot to offer in the future,” he said.

“She could be a promising stayer. She will take a lot out of today’s win and the confidence will do her good.”

Berry agreed the filly had potential.

“She’s a nice filly going through her preparation. I still think she’s a preparation away and is still a bit raw and a bit new.”

It was a welcome return to the winner’s circle for Scone based Sam Kavanagh after Dulcero’s tough breakthrough victory over 1350m.

The Dawn Approach mare, a $180,000 yearling previously raced by Godolphin, had been racing consistenly leading up to the win and was coming off a second at Muswellbrook over 1500m on May 23.

Kavanagh said it had looked like another “horror story” after Andrew Gibbons was caught three wide from the outside draw.

“I was a little concerned, but Gibbo knows her well and produced her at the right time.

“These owners have been brilliant, and we’ve been waiting a whole year to get a win with them.

“She was one of the first horses we brought but had a lot of feet issues and problems so it’s rewarding to finally win for them.

“Our horses are running terrific but just haven’t been getting to the line first, so I’m tickled pink for them.”

Dulcero ($4.80) was produced late in the straight but managed to run down the locally trained River Tycoon ($4.60) from the Mark Cross stable.

The $2.30 favourite Exterminate, from the Tim McIntosh yard, looked to have every chance and finished third, a length behind the winner.

A win for the locals with Kristen Buchanan’s promising filly Oakfield Arrow bringing up her second win from six starts.

It was heart on the sleeve stuff for Buchanan with the three-year-old having to sustain a long run in the straight before scoring a narrow win.

She now plans to spell the Press Statement filly and will bring her back for a tilt at the Provincial Championship Series in 2022.

“I’m really happy but I didn’t think she was going to get there,” a relieved Buchanan said.

“She had a bit of a hard time behind the slow tempo but got there in the end.

“It was a really good ride by Aaron (Bullock) and he got job done.

“I think she’s got a really bright future, so I’ll spell her now and bring her back for the spring.

“She’s tenacious enough and genuine enough to run in the Provincials and I’d like to have a go at it.”

Bullock described it as a “good win.”

“When I got cover, she relaxed good and when I got clear air and running, she got the job done.

“It was a good win. You get a good feel for horses going to the barriers and she gave me a great feel and all credit to Kristen.”

Runner-up, Matthew Smith’s Latina Beauty ($7.50) was the hard luck story of the race, having been caught wide throughout.

Hard Faith ($10) from the Nathan Doyle stable, was third.

The Jeremy Gask trained Tim’s Principal got the nod in an exciting finish, bringing up back-to-back wins for the seven-year-old.

It was a patient ride by in-form apprentice Reece Jones, who had to weave a passage in the final stages bursting through on the line to win by a neck.

Gask said it was great to see the gelding return to winning form.

“It was three years between wins and then he goes back-to-back. It terrific he’s in good form,” he said.

“He had a few hiccups during the drought and fires and had real trouble respiratory wise, so he had a long time off.

“He came back, and things didn’t go right but he’s in really good form now.

“It was a great ride by Reece. He gets on really well with the horse – he’s a good lad.“

In the closest finish of the day, seven horses finished within a length of the post, with Tim’s Principal ($4.60) getting the nod over Damien Lane’s $2.80 favourite Budhwar.

Lake Tai ($12) from the Bjorn Baker stable, was third.

A downgraded track didn’t affect the chances of the Stephen Jones trained Toro Toro despite the concerns of the stable.

The Time For War four-year-old proved he has no problem with rain affected tracks, relishing in the conditions to overhaul his rivals on the line for a strong win.

Tracy Rodger, representing the stable, said the horse’s only other experience in the wet was on a heavy track at a Muswellbrook trial.

“He did win the trial that day but was too good for them so we didn’t think that gave us a good guide as to whether he would handle it,” she said.

“He’s always been handy and has done super in the last two weeks and we thought we had a good chance until we saw the rain.

“He got through it well and it was a good win. It’s great to have Matty (Palmer) at Scone and riding our horses.”

Palmer said he also been surprised how well Toro Toro handled the track.

“It took me by surprise. He’s a huge horse and is pretty heavy so I thought he might just sink but he kicked away and was too good.”