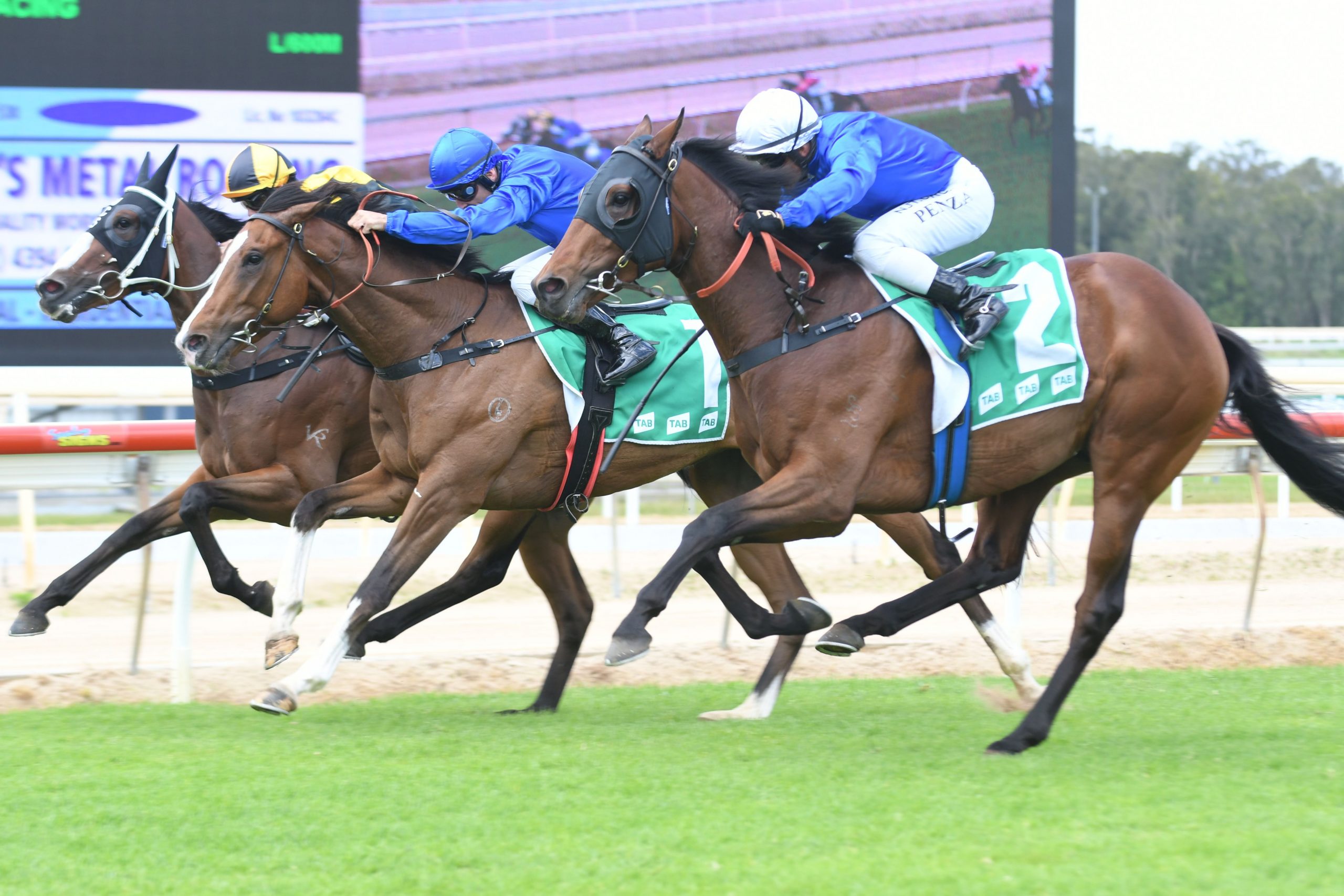 Matthew Smith and James Cummings shared the training honours at our Carlton Draught Spring Race meeting, training half the program.

A quinella for Godolphin in the BOOK YOUR CHRISTMAS PARTY AT WYONG RACE CLUB MAIDEN kicked off their winning double with Winston Blue narrowly beating stablemate and race favourite Dhakuri.

Jeff Penza settled the Sebring gelding near the rear of the field in the 1600m race, before gaining momentum on the turn and storming home to claim a narrow victory.

“He had a bit more fitness going into the race, with a few extra runs than Dhakuri,” he said.

“He gets to the line well and we thought the extra distance would suit.

“He has been a work in progress but has had a good couple of weeks going this and we were hoping to see an improved effort so he could get the job done.”

Three-year-old Winston Blue ($4.20) was having his fourth career start, coming off a fifth at Newcastle over 1400m on October 17.

A gun ride by Christian Reith gave Godolphin their second winner for the day with Mollycoddle taking out the 1350m 2 FLIES CHAMPION RYAN MARTIN F&M MAIDEN.

Reith followed his riding instructions to a tee, settling the Lonhro filly closer to the lead.

He hit the front mid-way down the straight and Mollycoddle, the $2.40 favourite, was able to sprint away to win by almost two lengths.

“We wanted to ride her a bit more forward today if the circumstances permitted and Christian was able to do that,” foreman Lee Cundy said.

“There wasn’t a lot of pace and she wasn’t far off them at any stage.

“That gave her the best chance at the finish and that’s how it worked out.”

Mollycoddle was second up after resuming with a second at Gosford over 1200m on October 8.

Having her seventh career start, she beat Dizzy Dawn ($21) trained by Craig Carmody, with the luckless Moremi ($3.20) from the Richard Litt stable, third.

A patient ride by Blake Spriggs brought up the first win for the Smith stable, with Rebel Bro ($9) taking out the RYAN’S METAL ROOFING CG&E MAIDEN over 1350m.

The Matthew Smith trained gelding broke through for his debut win at his seventh career start.

The four-year-old was coming off a disappointing ninth at Canberra over 1200m on October 23 but had caught the eye with two placings at Nowra and Kembla at the end of his previous preparation.

Spriggs settled Rebel Bro at the rear of the field and was last at the turn. He rounded the field and put in a sustained run to snatch victory on the line.

It was a case of one ride, one win for Spriggs, with Rebel Bro his only mount for the meeting.

A last stride victory by Latina Beauty in the 2 FLIES LIFE MEMBERS CONDITIONAL BENCHMARK 68 secured a winning double for the Smith stable.

The Deep Field mare, a $160,000 Magic Million yearling, followed the pattern of the day and came from the rear of the field in the 1350m race to grab a narrow win.

Ridden by Tyler Schiller, the four-year-old was having her 14th career start, having previously posted victories at Canberra and Goulburn.

Latina Beauty resumed from a spell with a third at Canberra on October 9 and was sent out at $18.

Race favourite Foxborough ($3.40), trained by John Sargent, looked to have the race won but Schiller was able to get the best out of the mare in the final stages to score a narrow win.

Acoustix ($4.40) trained by Tas Morton, was a length behind in third.

An emotional win for the connections of Miss Dior with the mare overcoming significant health issues just to make it to the track.

By Brazen Beau, the Snowden trained Miss Dior, was primed for a first up win and didn’t disappoint taking out the 1000m 2 FLIES RUNNER-UP GABE RIVETT MAIDEN in impressive style.

The four-year-old hadn’t raced since early January but had been given three trials leading into the race.

Her latest trial at Hawkesbury on October 19 caught the eye and she was sent out $3.70 second favourite.

Adrian Layt opted to take a sit just off the leader Jaytees, before hitting the front around the 150m mark and drawing away in the final stages to win by a length and a half.

Miss Dior was bred by Ali Foye and her family near Scone and considering her injury plagued early years, it was doubtful she would ever make it to the track.

As a foal, she lost her mother when she was just three months old and went on to have eye surgery and a paddock injury before she was six months.

“In total she has had chips removed from both stifles and hocks, her front right knee and left fetlock, a micro fracture in the left fetlock, severe arthritis in both front fetlocks.

“She was passed in at the Easter Sales because of her poor x rays despite her sister selling for $550,000 the previous year, so we decided to race her ourselves.

“I run a specialist equine injury rehab facility at Scone, Gundy Park Equine, so I’ve been able to care for her myself and help get her up and racing.

“It was very emotional seeing her win and I don’t mind admitting I shed a few tears.”

Stable representative Colm McCullough said they had been expecting a nice, first up performance from Miss Dior.

“She has always shown us that she has good toe,” he said. “She’s very much a sprinter, much like her sire and we thought the tight track and soft barrier would suit her today.”

The Tracey Bartley trained favourite Jaytees ($3.30) was runner-up, his 10th placing from 12 starts, with Impulsive Tycoon ($4.80) from the Hawkes stable, third.

Scone galloper Reveal The Magic proved too strong for his opposition in the final stages of the 1000m 2 FLIES QUEENSLAND CREW BENCHMARK 64.

Locally trained Invincible Kiss looked to have the race won, before Reveal The Magic came from the rear of the field to grab victory on the line.

The win brought up a double for Jeff Penza.

The Magic Albert gelding, trained by Peter Bloomfield, was narrowly beaten at his last start on his home track over 1100m on October 23.

He is a recent addition to the Bloomfield stable and was having his fourth start for them, having previously been trained by David Atkins.

Reveal The Magic ($9.50) brought up his second win at his 15th start, and has been placed nine times.

The Anthony Cummings trained Shadow Girl made it back to back wins taking out the 2 FLIES PUNTERS CLUB NSW CLASS 1 & MAIDEN over 2100m.

The consistent Uncle Mo mare broke through for her maiden win at Kembla over 2000m on October 24 and backed it up with a strong Wyong victory courtesy of a great ride by the in-form Alysha Collett.

Collett took advantage of the slow pace in a muddling run race and was able to settle the four-year-old toward the rear of the small field.

She took Shadow Girl ($4.60) wide on the turn, sweeping home in the straight to run down the Godolphin trained favourite La Sagra ($3.40) and Gunaluva ($14), from the John Sargent stable.

Collett has been in great form in recent weeks, with Shadow Girl bringing up her sixth win in less than two weeks.

A tough win by Brook Hill to take out the last, the LJ HOOKER BUDGEWOI CLASS 1 for Bjorn Baker and Mitchell Bell.

Schiller circled the field on the turn and was able to fight on in the straight to win by a long neck.

He beat the $4.20 favourite General Dubai, from the Robl stable, with the fast finishing Pink Beau ($11), trained by Kim Waugh, third.

The lightly raced Hinchinbrook gelding, a $110,000 yearling, was second up from a spell, having finished sixth over 1250m at Newcastle on October 17.

Brook Hill ($12) was having his fifth career start, having posted a win at Newcastle in May and placing on the same track.