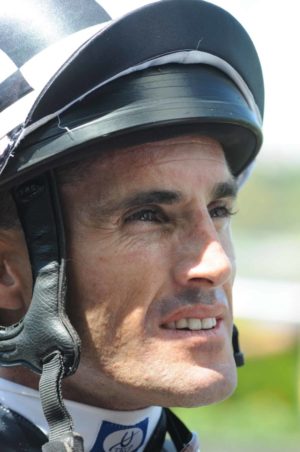 Grant Buckley continued a winning run with a treble at Wyong, his second in just eight days.

The in-form rider rode a double for Godolphin with Canzonet and Rebukes, and booted home Opinions for Paul Perry.

His Wyong treble giving him nine winners in the past eight days.

Buckley’s first win came on well-bred Godolphin gelding Canzonet, who may have earned a reprieve from the sales ring after his impressive win in the WWW.TAB.COM.AU 4YO & UP MAIDEN over 1200m.

The Exceed And Excel gelding was the first leg of a winning double for jockey Grant Buckley.

Darren Beadman, representing Godolphin, said he felt they might now reconsider the sale.

“The way he won there I’d think they could have second thoughts,” he said.

“He really put them away. It’s only his sixth start and he’s been placed three times.

“Bucko had a few options coming into the turn, but he opted to go wide and got the job done.”

Buckley, gave Canzonet a nice trail just off the pace, hooking to the outside on straightening, and drawing away on the line to win by more than three lengths.

Monstrosity ($6) from the Joe Pride stable was second, from the Pat Webster trained Lake Marion ($18).

The winner was sent out $1.24 short priced favourite on the strength of his last run, when he was narrowly defeated over 1100m at Hawkesbury.

A great front running saw Buckley secured his second victory on the Paul Perry trained Opinions ($6.50) in the CANADIAN CLUB CLASS 2 over 1600m.

He was able to hold off the fast finishing Doctor Manhattan ($2.80fav) on the line to score a narrow victory.

Buckley considers there is further improvement to come in the four-year-old.

“It was a nice win today. I was able to dictate terms and quicken when I wanted to quicken and that won me the race,” he said.

“From the 500m I was able to get going on my bike and with no weight on his back, he did a great job.

“He’s got improvement in him. He will be a better horse on a bigger track and probably over a little bit further.”

Judicator ($3.30) from the Gerald Ryan stable was third.

The Sepoy mare proved too strong for her opposition on the line, scoring a one and a quarter length win over $4.80 equal favourites Nines Enough, trained by Gabrielle Englebrecht, with Money Heist ($5.50) from the Waterhouse/Bott stable, third.

Darren Beadman was full of praise for the ride by Buckley.

“He rode her really well. He had options again on the turn and took the right one,” he said.

“Obviously she’s stepping up in distance a little bit but being by Sepoy, they tend to get better as they get older.

“She will go through her grades and I’m sure James will find a nice race for her somewhere.

Irish jockey Oison Orr added to his tally of Wyong winners with a double for the Waller stable.

Orr, who arrived in Sydney in late November, has had four rides at Wyong for three wins.

His latest double came on Sayl, who broke through for his debut win in the 1600m maiden, and Duneagle, who took out the 1350m maiden.

He has more than 120 winners to his name, five of those since arriving in Sydney.

“It’s been lucky enough here for me and I like the track,” Orr said. “I’m really enjoying my stint in Sydney.”

Relocating from Victoria proved the key for Sayl who broke through for his first win in the 1600m CENTRAL COAST BUILDING MAIDEN.

The four-year-old Great Britain import was having his 13th career start, and first in NSW, having been placed on three prior occasions in France and once at Moonee Valley.

“Chris likes to move them around if he thinks they have improvement in them, if they are getting bored or need more confidence and it worked a treat for this bloke today,” stable foreman Craig Ritchie said.

“He is still learning and is a horse that doesn’t have a lot of confidence, and does a lot wrong, so it was great to see him get a win today.

“He will continue to improve and should take plenty away from the win today.

“Oison (Orr) gave him the run of the race and that certainly helped. He is riding really well.”

Orr settled the gelding midfield, hitting the lead on straightening and drawing away to win by almost two lengths.

It was the second Wyong win for Orr, who claimed several Irish apprenticeships before coming to Australia in December.

Ritchie considers Duneagle has a bright future following his victory in the 1350m RYAN’S METAL AND ROOFING MAIDEN.

The Dissident three-year-old, a $215,000 yearling, was gelded following his debut run at Canterbury on August 7.

“He did a fair bit wrong in his first start but seems to have come back a much better horse this time in,” Ritchie said.

“The owners have a smart horse on their hands.”

“Once I got in behind the horse he switched off and was perfect, but early on he was a bit keen.

“He finished off well.”

Stable favourite Carluca ($5.50) put a smile on the face of trainer Jarrod Austin, defying a previous ordinary first up record to win the JIM BEAM CG&E BENCHMARK 64 over 1350m.

The eight-year-old gelding proved too strong for his opposition, holding out the fast finishing runners-up, to win by a short half head,

“He’s been working well, and his trial was good. He’s never showed us much first up, but he did today.

“He’s a horse that looks after himself in track work but he’s tough. His class showed through today.”

Austin said he would likely find a metropolitan race for Carluca.

“He’ll go back to town now, where he belongs. It’s a great way to start the new year.”

Mitchell Bell believes Bushido could be headed for a higher grade after making it back to back wins with his victory in 1100m HIT 101.3 FAMILY RACE DAY JANUARY 26 CLASS 1.

The three-year-old gelding, trained by Bjorn Baker, was having his third race start, after tasting success at Nowra on December 8 over the same distance.

Bell settled him just off the pace throughout, before taking him wide on straightening and finishing strongly to run down the leaders on the line.

He was happy with the performance of The Factor gelding.

“He’s come from a maiden at Nowra back to provincial grade, so it’s a good result,” Bell said.

“He felt good going through the line and is improving. He feels like a potential 1400m horse, so they have a few options.”