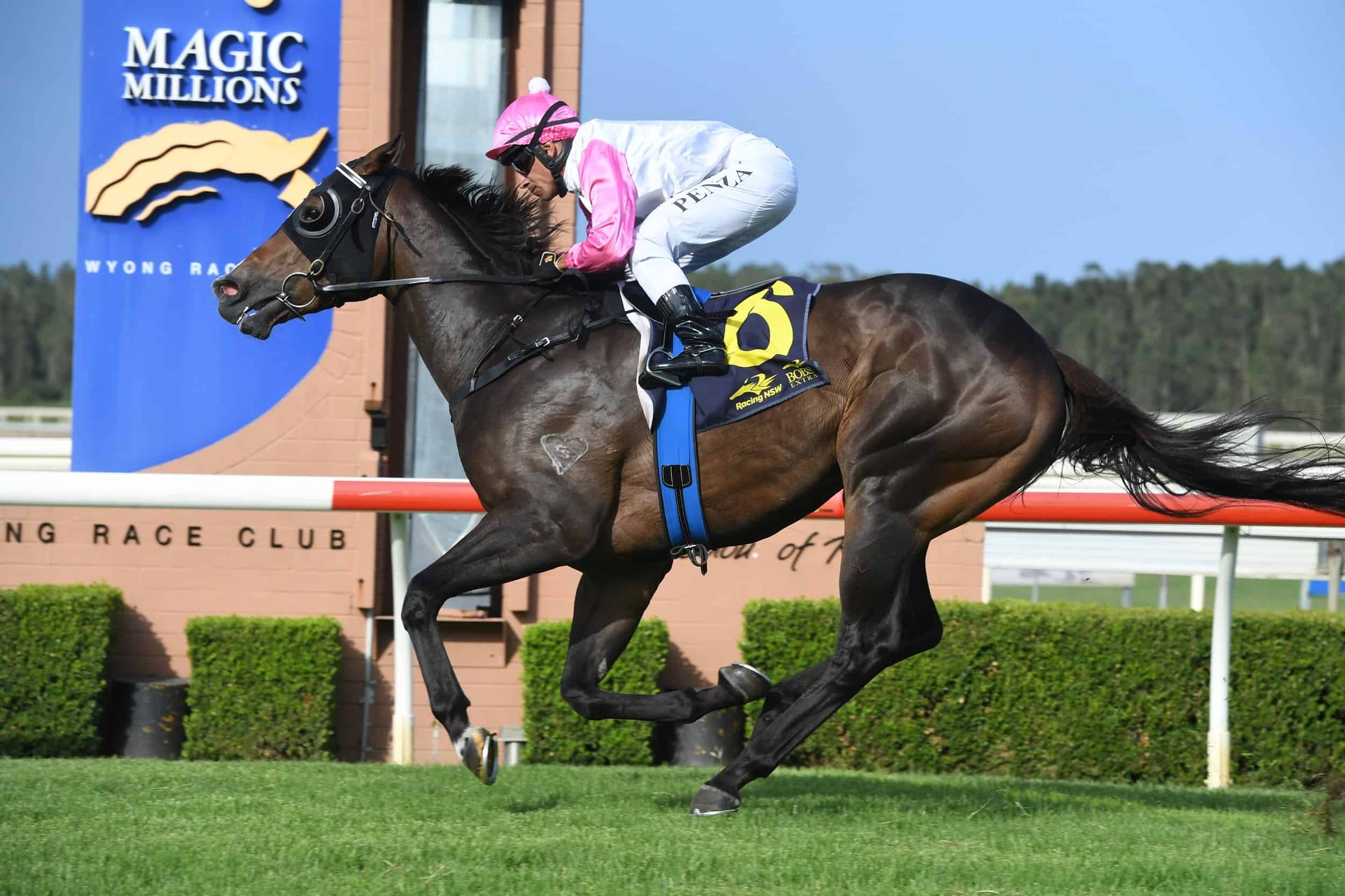 Heavily backed, Designated took a clear lead at the 100m mark and had three lengths on the field at the winning post.

A delighted Buchanan and an equally happy owner Alex Illes couldn’t contain their excitement as their horse returned to scale.

“He went very well for Serg [Lisny] when fresh over 1000m. Since then he has been a little bit tardy away and building into his races and today was an experiment, but I was very confident that he would get it and I like being right,” she said.

Buchanan said Designated had come to be in her care after running amiss in Queensland.

“Alex is his breeder and he and his wife Deidre send us a few horses and they are lovely people to train for.”

Jason Coyle and Mikayla Weir combined to take out the 1100m You’ll Love It! By The Halekulani Bowling Club 4YO & Up Maiden Plate with Freefica.

The four-year-old daughter of Benfica broke from the barriers with early speed and maintained the pressure for t 1100m, the remainder of the field simply running out of room to catch her.

Coyle said the mare had done it at both ends and had done ‘a good job of it.

“She will now work her way through her classes. She has a similar racing pattern to her sister who is stakes placed but whether she has what is required to get to that level is yet to be seen,” Coyle said.

Weir said of her mount: “when she got to the front she had a good look around. She travelled well but was a bit raw.”

The $300,000 daughter of Redoute’s Choice, trained by Les Bridge, had been winless in her previous six starts but made amends over the 1600m with winning jockey Travis Wolfgram saying the victory gave him every indication she could appreciate even further ground.

Stable representative Carmel Size said the filly was the first she had bought for owner Mr Ho and had always been a horse that needed strengthening.

“I gave her another four months off at the end of last preparation and I think we are going to reap the rewards of that this preparation,” Size said.

“She is a very special filly to me and is by Redoute’s Choice so that is going to hold her in good stead.

“I certainly think she will go on to city class.”

Wolgram said that Lady Legend jumped well and showed good early speed and was on the back of the right horses coming to the turn.

Space is Deep (Tommy Berry) made up good ground to take 2nd, Sebourg (Robbie Dolan) hung on for 3rd and Startalk (Tom Sherry) was 4th.

A protest 2nd (Space Is Deep) against 1st (Lady Legend) was dismissed.

Race favourite Atherton (Jay Ford) led from the start and Capri of Tuffy (Cejay Graham) took a sit behind.

Just after the turn, following a slight wobble, the three-year-old filly found her balance and let down, easily sprinting past the opposition to secure the win.

“We elected to come here and claim 2kg off her back and put Cejay on her and ride her on the speed,” trainer Peter Robl said.

“Those tactics proved correct. Every so often you get it right. I may have asked too much of her last preparation.

“She’s a very genuine filly and she can certainly win a metropolitan race – a mid-week at Canterbury or similar.

“The owner Richard Tuffy also owns the mare and bred this filly so he’ll be over the moon.

“It’s great for everyone involved.”

The Alloom Beauty Aussie Day Dash Class 1 Handicap over 1100m  was pitched as a galloping lesson and it panned out as exactly that … or did it?

The Godolphin owned and trained Acumen, whose pedigree page sports Group 1 winners and sires such as Helmet and Epaulette, jumped from the starting gates at odds of $1.30.

The royal blue Godolphin silks gave every indicator of leading from pillar to post and Jason Collet made it look like a morning at track work.

Keagan Latham had other ideas and as the horses powered into the final 100m, the Jason Attard & Lucy Keegan-Attard trained Reiby’s Regent (at odds of $26) suddenly loomed as a major threat, reducing Acumen’s lead with every stride.

In horse racing though you just have to win, even if just by a neck but punters who took the $1.30 would of been having heart palpitations.

“It’s always nice to see them back up and go from a maiden to a Class 1, particularly to win a fast race like this one.

“He was still in control of things and strong on the line. They broke 11 seconds for nearly every furlong that they ran today and that’s not an easy task so he’s a horse with a good future.

“He’s now had two Provincial wins so James [Cummings] will try and find a nice mid-week city race for him now, just go through the grades and see what he has to offer.

“He is only a lightly framed horse, so I think there is quite a lot of upside to him.”

Horses that put money in your bank account every time they step foot out are always an owner’s best friend and Merlinite gave her owners more reasons to love her today taking out the Event Cinemas Gold Class Gallop Benchmark 64 Handicap over 2100m.

The John O’Shea trained four-year-old mare, ridden by Tom Sherry, didn’t have the easiest of runs for the first half of the race given the muddling pace and her position against the fence.

Making her move at the 500m mark, Merlinite came wide and took the lead from Sea Spirit (Keagan Latham) at the 150m mark and was strong late to post back to back wins.

“It was a massive run. She travelled well throughout and I just wanted to get her to the outside so she could get the run.”

“She will be off to town now,” stable representative Tom Charlton said.

“She is now at a rating of about 64. She is also at the bracket of about 2400m and needs a wider track. The barrier seems to be a bit of an issue for her.

“She is jumping a bit slow. Whether she is just very relaxed it’s hard to say. She needs more room to best show her assets.”

By the same sire as Everest winner Yes Yes Yes, Turnstyle showed she has plenty of potential when she showed the opposition a clean set of heels in the Freddy’s Fishing.com.au Benchmark 64 Handicap over 1000m.

The three-year-old filly has now won her last two starts and placed second in her only other race. Her latest win was in class record time; the previous record being set by Tough Larry on 27 November 2019 (a time of 57.10).

They may well be their next star in the making.

“She’s always shown us promise but we have had setback after setback, and it has always held back the preparation. Nothing major but enough to hold things back,” David Henderson said after the race.

“She has never done too much wrong.

“We have always thought she was going to be Saturday city class if not better so we thought we would come here today and hopefully she would win.

“It was a tough race, but she was comfortable, and she won it well, so we’re really pleased.

“She has a bit of that X factor about her and that keeps coming out as we go along with the preparation.”

Jason Collett was the successful jockey, the win bringing up a winning double for him.