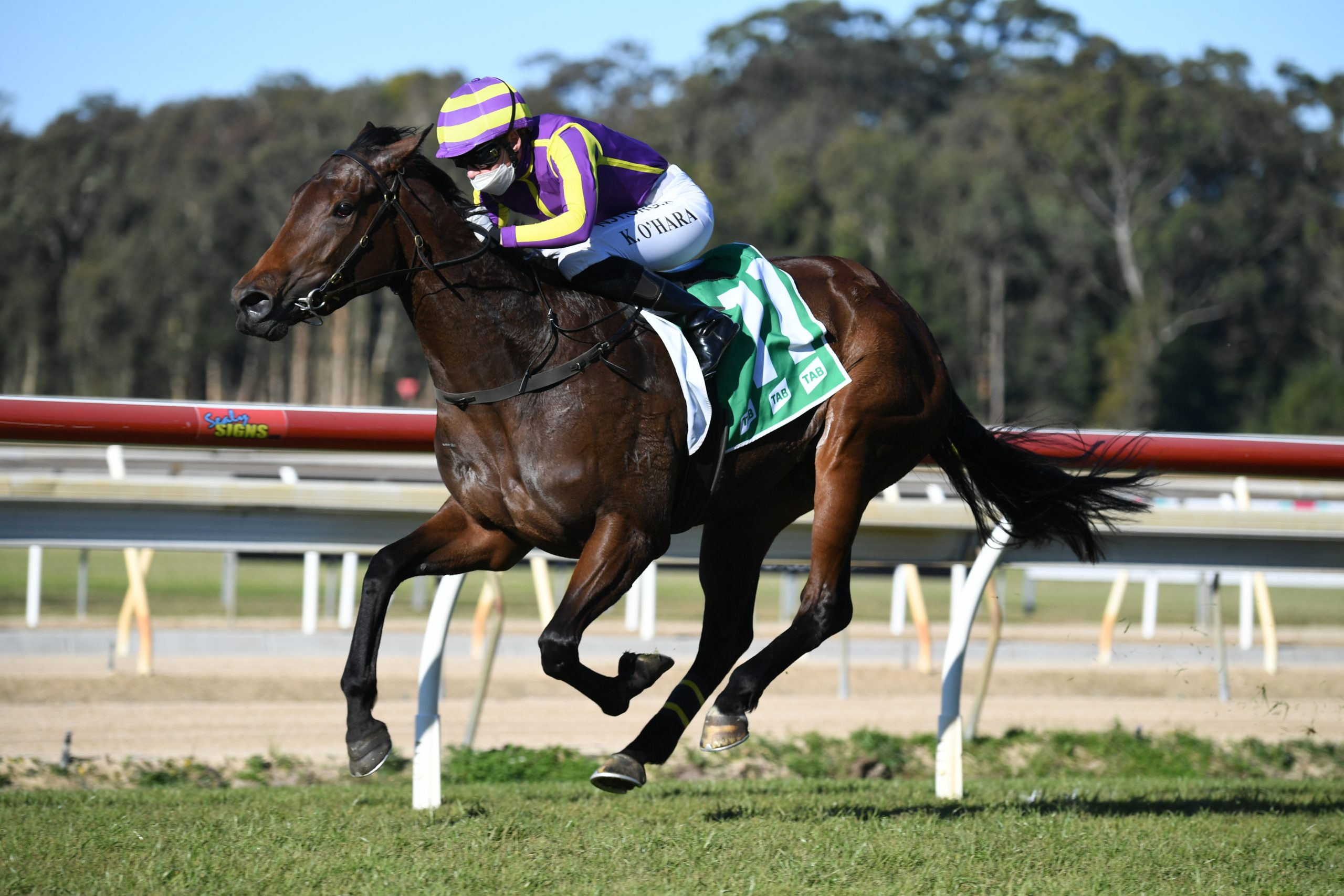 Tracey Bartley had a memorable day on his home track, with a winning double at the last Wyong meeting of the season.

Sebrenco and Defeat greeted the judge for the stable in their respective races, both well supported in the betting.

It was also a memorable day for popular jockey Grant Buckley who brought up 100 wins for the season on Sombre Prize, for Hawkesbury trainer Henry Reeves.

Reeves was also celebrating with the win his first since 2016.

A great first up effort saw the Grant Allard trained Rubielie ($3.30) out sprint her rivals over the 1100m.

The Rubick mare, having her 13th career start, had been luckless in several of her previous runs but returned fresh from a spell to bring up her debut win.

The speed was slow in the early stages, forcing Josh Parr to take off early in the straight.

Despite not trialling, Rubielie responded well and was able to finish strongly to win by a half-length.

“She’d done plenty of work at home and in the past, she’d raced well fresh,” stable representative Jake Hull said.

“I’m not sure how strong of a form race it is today, but she had too much on them.

“Things didn’t really go her way. They walked early and Josh made the right call to take off.

“She’s a bit of a slow mature, but the penny has really dropped with her now.”

Sombre Prize gave popular jockey Grant Buckley his 100th win for the season, the Dream Ahead gelding bringing up his first win at start 20.

Buckley had to work hard to claim his century, with the Henry Reeves trained Sombre Prize ($7.50) laying in in the final stages, before recording a narrow victory.

He then had to survive a protest from the runner-up, which was quickly dismissed by stewards.

“He took some riding but I’m glad to get the 100 up,” Buckley said. “It takes a bit of pressure off now.

“He’s not an easy horse to ride. He wanted to lay all over the other horse, so it was a slog down the running.

“Henry only has a small team at Hawkesbury and does a good job. I rode him when he was placed second last start and we talked about where to start him next.

“This race looked cherry ripe for him, and it turned out well.”

The Dream Ahead four-year-old is Reeves’ only horse in work and has now had a win and three placings from his 20 starts.

Rod Bailey’s $2.80 race favourite Mister Ripley looked like ending a run of placings, only to be nailed on the line.

Gloraya ($15) from the Alexandre Lemarie stable, was third.

A decision by Mitchell and Desiree Kearney to back up Carlisle Bay paid off with the Smart Missile gelding breaking through for his first win.

The three-year-old was coming off a second over 1300m at Kembla on July 22, with the stable confident he would appreciate the quick back up and rise in distance.

Carlisle Bay did just that and courtesy of a well rated ride by Jean Van Overmeire, brought up his debut win at start ten.

Co-trainer Desiree Kearney said they had been confident the gelding would run well and expect more improvement next preparation.

“He has trained on really well since last run, is very fit and we couldn’t be happier,” she said.

“He tries very hard and is one of the unluckiest horses going around. We wanted to give him one more chance with the BOBS.

“He’s a smart little horse and I think we will have a bit more fun with him next preparation when he gets up over 1800m to 2000m.

“There is a race for him at home in two weeks, if he’s not giving us any reason not to, we will keep him going.”

It was the second win in three days for the Hawkesbury based Kearney stable, with a third at Kensington in between.

They paid $2000 for the then unraced two-year-old at an online sale in May last year.

An upset in the three-year-old maiden, with Brad Widdup’s Eminencia beating the two fancied Waller runners.

The I Am Invincible filly, having her fifth career start, was coming off a narrow defeat over 1300m at Hawkesbury last start.

Tom Sherry settled Eminencia ($12) just behind the early leader, hitting the front on straightening and holding out the Waller pair of Barrichello ($2.90) and Cat D’Oro ($2.60fav).

Stable representative Andre Rabett said the filly had finally brought her trackwork form to a race.

“It was great to see her win today,” he said.

“She’s always trialled well but has shown a few tricks in her races.

“It’s really good for her to come out and do everything right today and get the result.

“She’s finally shown what we see in trackwork and trials. Hopefully she will move forward to better races.”

Waller’s Cat D’Oro was the hard luck story of the race, denied a run in the final stages.

Tracey Bartley’s Sebrenco could head to the city for her next start, after bringing up her second career win.

The Sebring two-year-old, proved too strong for her older opposition, leading from barrier to post to record a one length victory.

Bartley will assess the filly over the next few days but could give her one final race in town to round off her preparation.

He had been confident coming into the race, after Sebrenco was runner-up at her two previous starts at Muswellbrook and Dubbo.

“She’s a young two-year-old and this is only her second race preparation,” he said.

“She shows good potential at home, and I thought she’d be hard to beat today.

“She’s a nice filly and being on her home track, from the soft draw and on top of the ground, I knew there would be improvement.

“She got a good kick coming to the corner and put them away.

“I’d like to see her in a race where she can take a sit and relax, that would be ideal.

“I’ll assess her over the next few days but might give her one more run in town.”

Gary Moore’s consistent Prince Invincible could be headed for a Midway Handicap on the strength of his strong three and a half length win.

The heavily backed son of I Am Invincible brought up his second win with Tim Clark in the saddle.

In typical Clark style, Prince Invincible was given a great front-running ride, drawing away in the final stages.

Clark was full of compliments for Prince Invincible, a $580,000 yearling purchase, who now has two wins and five placings from 10 starts.

“He’s going really well and is in a really good zone at the moment,” Clark said.

“He’s a really happy horse and that translates to a really good performance, probably a personal best for him and hopefully he can continue in that way.

“He was caught wide at his last start but still ran a solid race. They freshened him up, then he had a good tick over trial win and came here in really good order.

“Gary has done a great job with him. A think a tilt at the Midway could be well and truly on the cards.”

Matt Vella’s Sniper Legend, well supported in the betting, failed to load at the barriers.

A perfect ride and quick tempo set the scene for Go Gazza to bring up back-to-back wins and plot a course to a Midway Handicap.

The Foxwedge three-year-old was coming off a last start Wyong win over the same distance and earned strong support starting at $5.

Tommy Berry, who rode Go Gazza to his dominant maiden win, settled him midfield off the strong tempo, before bringing him to the front on straightening.

He was able to hold out the fast-finishing favourite, Bjorn Baker’s Lake Tai ($3.50), to win by a long neck.

“He took confidence out of the maiden win and Tommy was impressed, so we said we will do what worked and bring him back.

“As it turned out it was the right race, over the right distance, with the right jockey. Everything aligned and he got the job done.

“He’s related to a couple of Oaks winners, and we did a DNA test on him that told us he will run up to 2400m.

“We aren’t in a hurry to get him there. I think he will be well suited for a midweek or a Midway, so we will see what’s around.

Another of the Baker runners, Deel With Me ($10) was third.

Tracey Bartley was expecting a much-improved performance by Defeat and that’s exactly what he got with the five-year-old winning by almost three lengths.

The I Am Invincible gelding capped off a great day for the stable, with Sebrenco scoring earlier in the program.

Bartley said Defeat had been the victim of bad track conditions and barrier draws in his recent runs.

Despite drawing wide at Wyong, the good track rating suited and the win resulted.

Brock Ryan was given instructions to rev the five-year-old up midrace, and he followed them to a tee, taking off at the 600m.

Defeat circled the field and kicked in the straight, drawing away for a dominant win.

“I told him to rip into him and build momentum and that’s exactly what he did,” Bartley said.

“They weren’t going to beat him with that momentum. He rode him a treat.

“It’s been a great year and credit to the staff.”