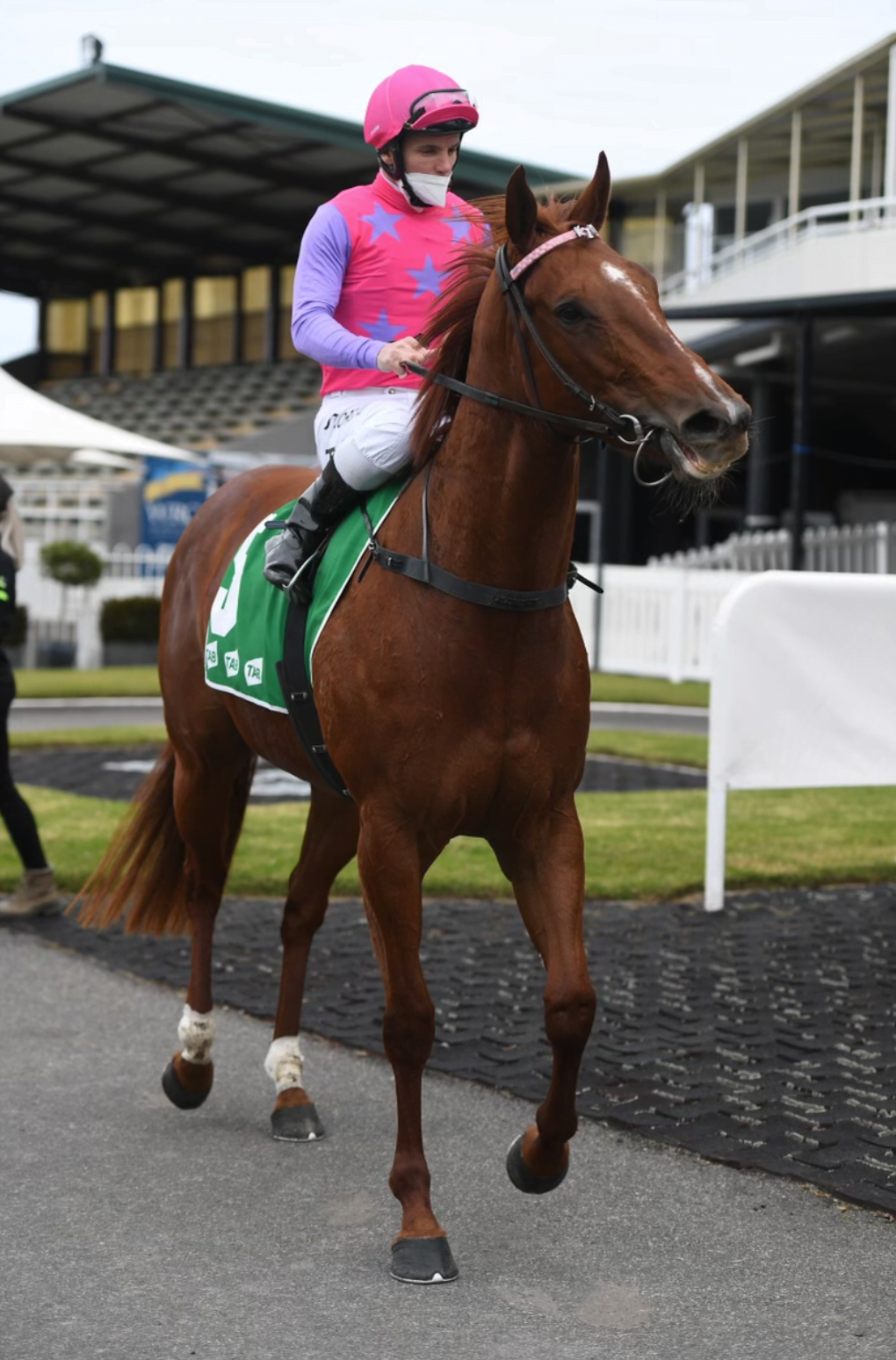 Kim Waugh’s debutant Pretty Enuff was one of the standouts on a strong day of racing at Wyong.

The Rich Enuff filly was impressive in winning the 1200m Prov & Ctry Maiden and looks to have a bright future.

Mr Bond emerged as a good staying prospect for Brad Widdup after blitzing his opposition in the 2100m Class 1 & Maiden.

There could be some promising newcomers’ surface from the two-year-old race including the winner Sealion from the Waterhouse/Bott stable and Tracey Bartley’s Mabel, who stormed home to be narrowly beaten.

Jay Ford took out the riding honours with a double, partnering Mr Bond to victory and Roderick’s Secret for Matthew Smith in the 1600m Class 1.

Crazy Wolf took out the opening event, despite the Hawkes trained three-year-old looking beaten on the turn.

The All Too Hard gelding started $2.70 favourite and was settled toward the rear of the small field by Regan Bayliss.

When he asked for an effort on the corner, Crazy Wolf dropped the bridle and looked beaten.

But Bayliss was able to get the best out him in the final stages, with Crazy Wolf rallying to win by three quarters of a length.

Kim Waugh’s Don’t Recall was the hard luck story of the race, finishing second after hanging badly in the straight.

Bullet Hero ($2.80) from the Mark Newnham stable, was a long head behind in third.

The winner, a $210,000 Magic Millions yearling, was having his fourth start, his previous three runs in Victoria.

Brad Widdup is excited about the prospects of his stayer Mr Bond, who made short work of his opposition to score a dominant five and half-length win over the 2100m.

Jay Ford settled the Darci Brahma four-year-old at the rear of the field for much of the race, before making his move on the turn and outsprinting his rivals in the final stages.

Widdup said the gelding, who had two starts in New Zealand before joining his stable, had plenty of potential.

“He’s a nice type of horse and I think he could have some better staying races ahead of him,” he said.

“He came over to me in great order from New Zealand and has been pretty straight forward to train.

“He got cast in the box after his Nowra win, so we had to take a bit of time with him.

“The run at Kembla last start just topped him off for today.

“He’s going to be a lovely horse next time and is going from strength to strength.”

The Foxwedge gelding, a $45,000 Magic Millions yearling, is raced by Newcastle based Minervini and a group of his friends.

He was a runner up at Kembla over the same distance last start and looked well suited to the Wyong race.
Berry settled him toward the rear, before circling the field on the turn and drawing away in the straight to win by almost two lengths.

Go Gazza started at $5 after the Waller trained runner-up Mouvement earned strong late support and was sent out $2.45 favourite.

Law Party ($3.20) from the Newnham stable was third, with Kylie Gavenlock’s Trojan Hero the one to follow, making up plenty of ground in the straight.

The consistent Go Gazza has now had a win and three placings from his seven starts.

It was an impressive debut by the Kim Waugh trained Pretty Enuff, who looks to have a promising future.

The Rich Enuff three-year-old was coming off two trials, her latest at Wyong on June 25, an eye catching third over 1000m.

She earned strong support in the betting on the strength of the trial, starting $2.40 favourite.

Tim Clark opted to ride Pretty Enuff back in the field, before taking off on the turn and drawing away in the straight to win by more than a length.

Waugh said she has a good opinion of the filly, a $50,000 Inglis yearling.

“She’s a lovely filly with good ability but she’s taken a lot of time to get her act together.

“I like her, and her last trial was really good.

“She is built like a colt, and we had a lot of trouble early with her knees jarring up.

“She just needed time and it’s good to get the win today.”

Pretty Enuff is raced by a syndicate which includes Waugh’s husband Mark.

It was a Wyong quinella with Nayziair ($11) from the Lane stable second, over

The Waterhouse/Bott trained Sealion caused an upset in a classy field of two-year-old’s, beating the more favoured runners at the juicy odds of $41.

Jean Van Overmire piloted the Astern gelding, who was coming off a trial on July 5, when he finished second over the 800m.

Sealion pinged the gates and was wide throughout but still managed to hold out his opposition in the final stages and win by a half-length.

Tracey Bartley’s Mabel, the $3.50 favourite, came from near last on the turn to finish second, ahead of Godolphin runner The Globe ($8.50).

Neil Paine, from the Waterhouse/Bott stable said they had expected Sealion would need more ground.

“He was wound up to do his best today, but it was just a steppingstone to get him up to the 1350m and mile,” Paine said.

“He’s a real big duffer of a horse and we thought he’d be looking for further but it’s great to get a win along the way.”

An exciting four-way finish saw the locally trained Apex narrowly beaten on the line by Roderick’s Secret from the Matthew Smith yard.

John Cooper’s Apex ($15) looked the winner after leading throughout but was swamped on the line by the backmarkers.

A Rubick’s gelding, Roderick’s Secret ($9) brought up his second win at start 18.

It was another great ride by Jay Ford, to bring up a winning double, taking off at the 400m mark, making up ground on the turn and storming down the outside to win by a half head.

The $50,000 yearling was coming off a sixth at Hawkesbury last start over the same distance, beaten just over two lengths.

The John Thompson trained Speedzone ($3.60) was third, with the $2.60 favourite UK import Sidereal, struggling under the 62kg.

The Star Witness four-year-old has had seven runs this time in for two wins and five placings.

She added to her win tally with a great ride by Rachel King, who went head-to-head with the favourite Born To Play around the turn, before drawing away to win by a length and a half.

The $150,000 Magic Millions yearling now has career stats of two wins and eight placings from 12 starts.

The $3.20 favourite Born To Play struggled in the final stages, finishing more than three lengths behind in sixth.

A clever ride by James Innes Jnr secured victory for Star Cherie, a daughter of Star Witness, who brought up her second win from five starts.

The Ryan/Alexiou trained three-year-old relished the improving track conditions to win by a long neck over the $3.10 favourite Head On Up.

Innes looked like being posted wide from the barriers but elected to stride up and settle the filly just behind the leader.

She hit the front on straightening and dug deep in the final stages to record her second win.

Gerald Ryan described the winner as “a little fighter.”

“That’s one of her best qualities, she’s a real fighter. She’s no star but she digs deep and has a go.

“For her first racing prep she’s done a terrific job. She might be looking for a rest now, but we’ll see how she pulls up, she could have one more run.”