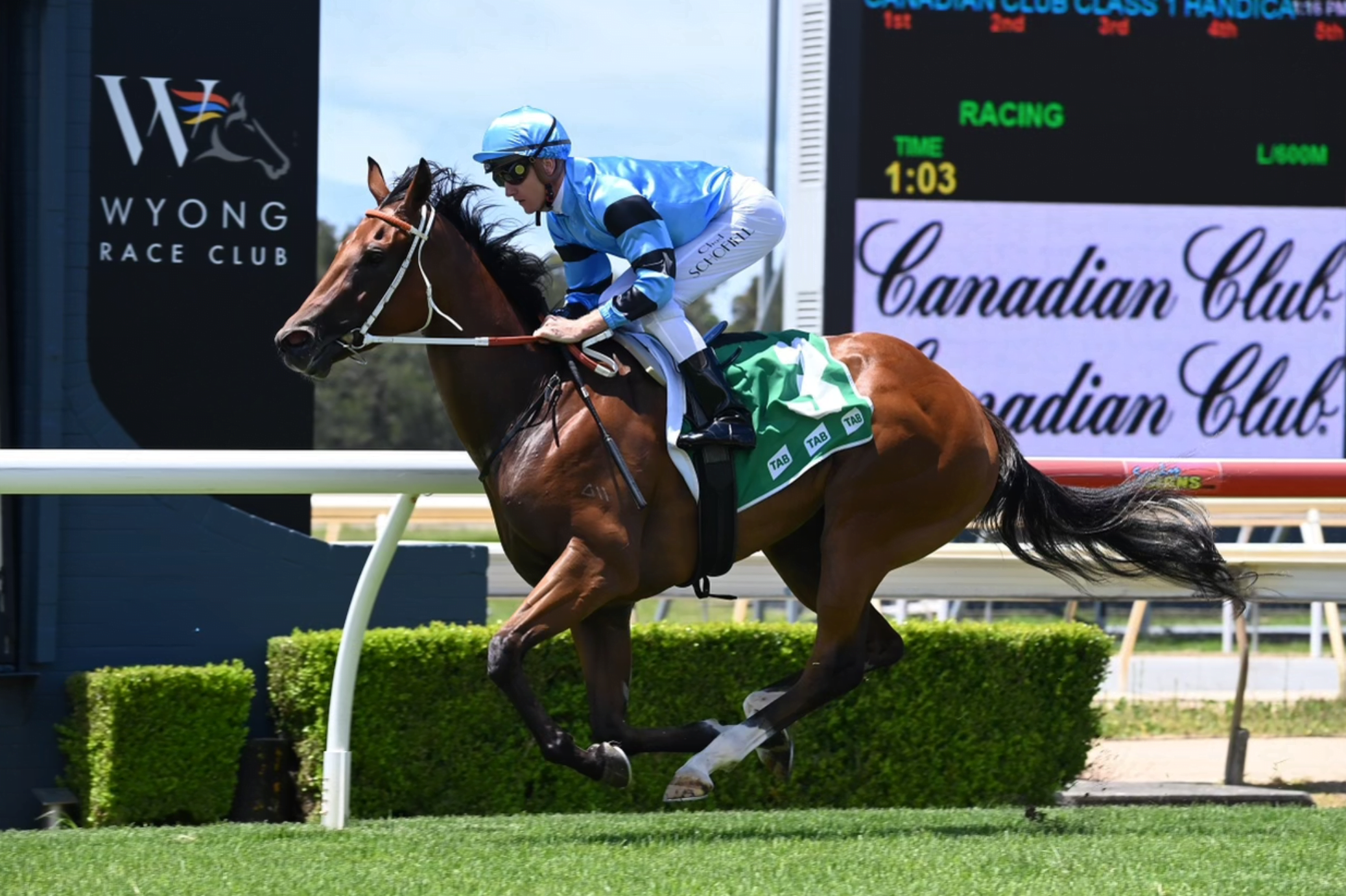 A great day’s racing saw some progressive horses greeting the judge and a long-shot local causing an upset.

Garry Frazer’s speedy Rita May looks to have a bright future after bringing up her second win, while the Hawkes trained Petulant impressed her trainers with another dominant win.

John Cooper carried the flag for the locals after Alastor caused an upset in the 2100m BM64, outstaying his rivals to win by almost three lengths.

An easy watch in the first race with the Hawkes trained Petulant justifying her short price with a dominant win.

The Starspangledbanner three-year-old was coming off a last start Wyong victory over 1000m on December 9.

She was sent out $1.40 favourite and taken straight to the lead by Chad Schofield, who dictated terms throughout, easing her down in the line to win by almost three lengths.

“I told Chad she should jump well and that I wanted him to lead, stack them up, give them the slip on the corner and hit the line solid. That’s what she did,” Michael Hawkes said.

“We’ve always liked the filly and from what we’ve seen to date she’s doing everything right. You can’t make excuses for winners. She’s done everything right and will improve again next preparation.”

Schofield, having his first ride at Wyong since returning from a stint in Hong Kong, was complimentary of the filly.

“She jumped straight to the front, towed me along and was never going to lose,” he said. “She won quite effortlessly, and I can see her going on to better things.”

Damien Lane’s Princess Amira ($15), having her first start for the stable, was runner up over the Matthew Smith trained Per Ivy ($4.20).

Debutant Amortal ($3.40) was too strong in the final stages snatching a narrow win over the race favourite Legend Rules.

The Darby Syndications four-year-old, trained by Mark Newnham and ridden by Tyler Schiller, had been successful in two previous trials, the latest a Warwick Farm victory over 796m on January 10.

The son of Written Tycoon had been the early favourite but drifted in the market after Les Bridge’s Legend Rules earned strong late support to start $2.60.

The winner, a $340,000 Magic Millions yearling, pinged the gates but was headed by Legend Rules early in the race, with the pair going head-to-head down the straight.

Robyn Fowler, representing the Newnham stable, said she had been concerned when Amortal raced a little greenly in the straight.

“I was thinking don’t throw it away, but he got on with it and knew where the line was. He had trialled really well and came here today with fitness on his side. He’s quite a relaxed horse but has just taken a while to mature.

“Tyler knows him very well having ridden him in the trials and in his work, so it’s good for him to get the win.”

Cross The Rubicon ($12) from the Brad Widdup stable, was third.

A super training effort by the Waterhouse/Bott team with Gulf Of Saros winning first up from a 12 month break.

The Snitzel colt debuted at Rosehill on January 16 last year before a lengthy spell.

He had three trials leading into the Wyong race, the latest an open trial over 1200m at Gosford on January 6.

Stable representative Neil Paine said they had been confident the three-year-old would run a nice race.

“They got him nice and fit for this race with the three trials. They knew he had ability, he just needed time to thicken out,” he said.

“First up over a mile is a big effort and I think he will be a good stayer in time. It’s great to see our long-time clients Sun Bloodstock with a nice horse coming on.”

Winona Costin took Gulf Of Saros to an early lead, maintaining the front throughout. He looked the winner a long way from home and despite a late challenge from short priced favourite Regal Pom, scored by a length and a half.

The winner was sent out at $12, with a plunge coming for the Neasham trained Regal Pom, who started at $1.20. The Waller trained Campeao ($4.80) was third.

The was a quite air of confidence from the Cummings stable about the chances of first starter Rosovo ($9) and the son of Animal Kingdom didn’t disappoint.

The three-year-old came from the rear of the field on the turn, putting in a sustained run to snatch victory on the line, courtesy of a super Josh Parr ride.

Stable representative Tina Rogers said things seemed to have clicked into gear for the gelding following his last trial.

“It was like he realised what he had to do,” she said. “It’s taken him a long time to learn but we like to let them go through their paces in their own time.

“He’s shown us a something in his last couple of gallops and we came here with some confidence. It was a great ride by Josh.”

There were no excuses for the $3.70 Waller favourite Dresden, who looked to have the race won before Rosovo’s flashed home to win by a nose. Starstruck Barbie ($4.40) trained by Marc Conners, was third. 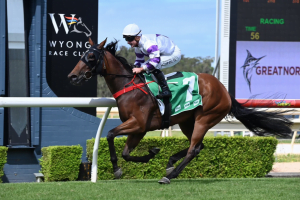 The speedy Rita May is building a nice resume bringing up her second win in just her fourth career start in a smart time.

The three-year-old looks to have a bright future with trainer Garry Frazer tipping she will win plenty of races if she can stretch out to the 1200m.

She hit the ground running, taking the lead early in the race, and maintaining it throughout to score by almost two lengths.

Frazer had applied blinkers to Rita May and was happy with the result.

“She didn’t fire up with them on and I actually think she relaxed better,” he said. “She gave a good kick which was great to see. It was a very satisfying win and I’ll give her a month off now.

“We’ll treat her a bit lightly and see where she ends up but if she can run 1200m I think she’ll win plenty of races.”

Ridden by Reece Jones, Rita May was coming off a sixth at Wyong on December 15, beaten just over two lengths, having won her maiden over 900m at Newcastle the previous start.

The filly carries the colours made famous by the White family, with Frazer having trained their Group 1 winner Spright.

A home track win for John Cooper with Alastor upsetting the more favoured runners to bring up his fourth career victory.

The Spill The Beans gelding was the rank outsider of the field, the win returning $61.

Jess Taylor rated the four-year-old beautifully in front throughout, with Alastor kicking on the turn and drawing away to win by almost three lengths.

He was purchased by Cooper and is raced by his family, with the Wyong win his first since transferring to the new stable.

He had been unplaced in four starts since Cooper took over the training in December last year, his latest effort a sixth at Wyong over 2100m on January 8, when he led but tired in the final stages.

Cooper had him fit and ready to win with the upgraded track and distance ideal.

He beat the well supported favourite Atonement ($3.70) from the Matthew Smith yard, who had every chance, with Godolphin’s Sandastan ($5.50), third.

The Tapit six-year-old, trained at Tamworth by Sue Grills, was third throughout, with Buckley sticking to the rails and getting a great run in the final stages to claim victory.

“It was a great ride by Grant, he deserves all the credit,” Grills said. “I was a bit worried he might get held up, but the gap opened, and it was fantastic. I’m very happy.

“I’ll probably look for a 1900m at Canterbury because he likes the softer tracks down this way.”

Gary Moore’s last start Wyong winner Prefect Match ($5.50) was second, after sitting just off the leader throughout, with the $3.90 favourite Twice On Sunday, trained by Bjorn Baker, looking to have every chance in third.