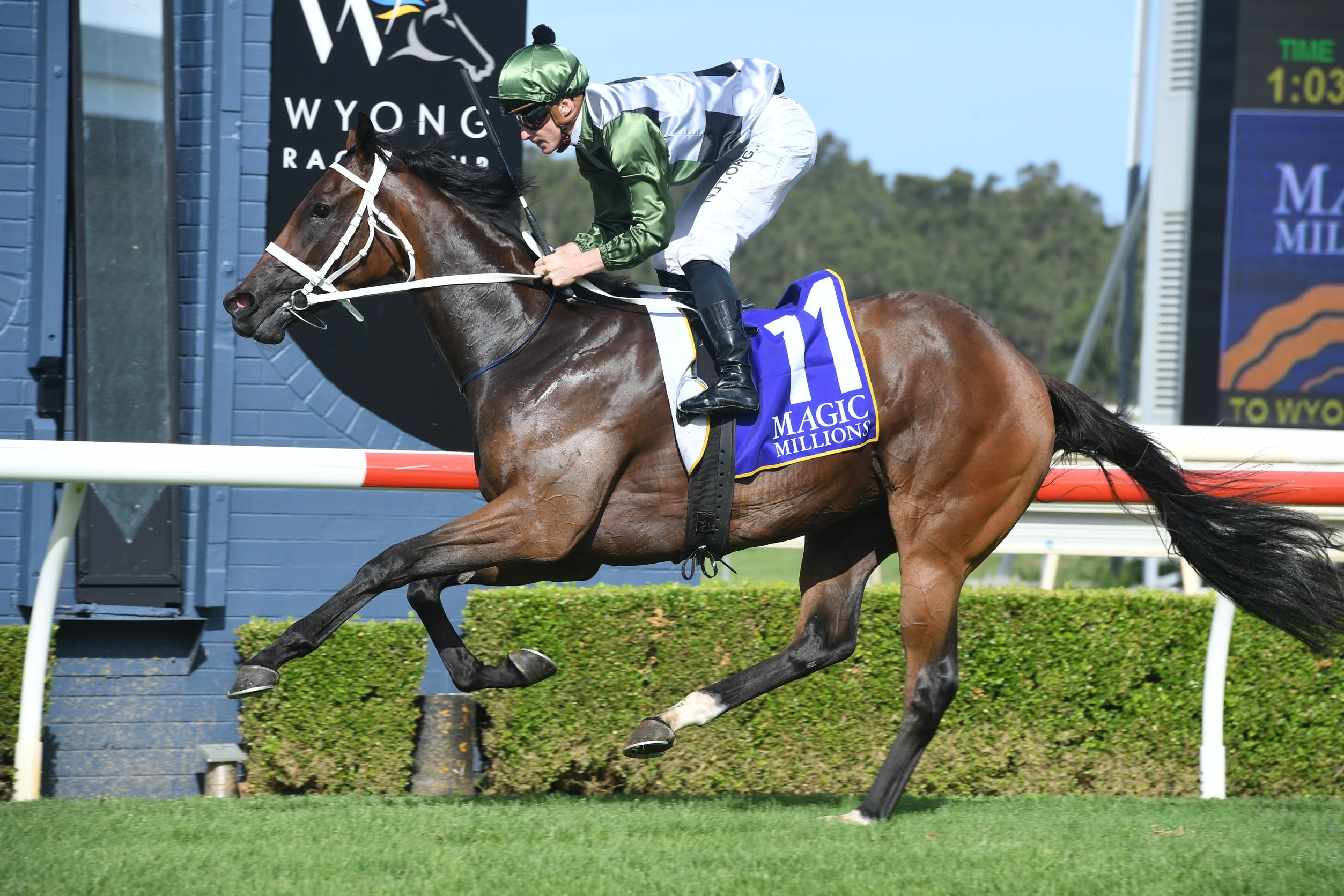 She’s All Class left no-one in doubt about her ability taking out the $200,000 MAGIC MILLIONS WYONG 2YO CLASSIC and giving trainer Chris Waller his first win in the feature race.

The I’m Invincible filly, a $200,000 Magic Millions graduate, put almost five lengths on her opposition in the straight in a dominant performance.

James McDonald stalked the leaders coming to the turn before hitting the lead on straightening and drawing away for an effortless win.

The victory was also McDonald’s first in the Wyong feature.

Her emphatic victory saw her tumble from $51 into $4.80 equal favouritism for the $2million Gold Coast Magic Millions Classic.

And she looks a real chance of emulating the success of previous Wyong 2YO Classic winners on the Gold Coast.

Dan Cobby, representing the Waller stable, described it as a pretty impressive win.

“We were pretty confident coming into today and she’s shown up,” Cobby said.

“Credit to Chris and the team, they have done a really good job with her. “She had other options to run over the last couple of weeks, but the team and owners have been really patient with her and proved they made the right decision with her today. “

Cobby said She’s All Class had raced well on debut in the Victory Vein at Randwick in October.

“She showed really good speed that day and finished third.

“Today she was in a perfect position and they went very hard in front.

“She’ll join Shaquero and a couple of others heading north. We are looking forward to the Gold Coast.”

James McDonald said Waller and his team had done a marvellous job with She’s All Class.

“She’s a hypo little filly. Chris tinkered with a few things and she really impressed me in her trial.

“We always knew she had ability. She works like a pretty good horse at home and we brought her here today to see what she could do.

“She wasn’t all that comfortable around the track, but she got the job done.

” The six furlongs on the Gold Coast will be right up her alley.”

She’s All Class ($7) beat Victorian visitor Gleneagles ($4.80fav) from the Busuttin/Young stable, with the Waterhouse/Bott’s Swift Witness ($5), a long head behind in third.

Eleven Eleven overcame a wide draw to take out the $100,000 MAGIC MILLIONS WYONG 3YO & 4YO STAKES for Greg Hickman and Keagan Latham.

The son of Fastnet Rock proved too strong for his opposition scoring an impressive victory and securing another trip to the Gold Coast in January.

It was another feature for Eleven Eleven’s already impressive resume, including the rich Magic Millions 3YO Guineas in January.

The Wyong victory came courtesy of a cool ride by Latham, who was caught three-wide on the four-year-old for much of the 1200m trip, but he was able to quicken in the straight and run down the leaders to win by almost a length.

Hickman had intended to run Eleven Eleven at Randwick on Saturday but opted for the Wyong race, which proved to be a winning move.

“He’s been a bit up and down this preparation, but we pulled the right rein here and it worked out really well,” he said.

“Keagan gets on really well with this horse and he knows what he can do.

“He might have been a bit wide, but he gave him plenty of space to hit the line.

“He’s the type of horse that wants an uninterrupted run. Keagan knows this track and did a super job.”

Hickman said he will likely give Eleven Eleven one more run before heading to the Gold Coast.

“I’ll give him a start and see how he pulls up after that and then on to the Gold Coast.”

Latham said Eleven Eleven was right on target for another crack at one of the Magic Millions features in January.

“It was a good win today and nice to see him put his ability forward,” he said.

“He quickened really well today, and we are on the right course to go back to the Gold Coast.

“He’s a nice big animal and has a good bunch of guys who support him, so hopefully he can do the magic again up there.”

Latham has partnered Eleven Eleven in each of his five career starts.

The Onemorenomore gelding fought out the finish with Partelle’s Commander Belle, a nose separating the pair on the line.

Jason Collett had to be patient in the straight waiting for a gap to appear and Onemore Sapphire was able to take the split and drive to the line.

“It was a beautiful ride,” Bartley said.

“He just needed luck there and the spilt was enough for him to get through.

“I knew Jason had a lap full of horse in the straight and the luck came. It was really nice. “

The win brought up a double for Collett.

“I did get a bit of luck in the straight which was good,” he said.

“It was a tricky sort of gate for a horse that races back, and I needed the luck and I got it, so it was really good.”

Onemore Sapphire was sent out $2.80 favourite on the strength of his last start win at Tuncurry.

Commander Bell, started at $16, with Foxborough ($3.80) trained by John Sargent, a close third.

Jones partnered the Richard Litt trained Wander ($4.40) to victory, the sixth win for the well-bred six-year-old.

Litt was full of praise for the ride by Jones.

“Credit to Reece he rode him really well and it paid off,” he said.

“The horse has a big finish in him but the last few runs he’s just had no luck.

“The other day at Warwick Farm he was caught on the fence. He was happy to be wide today and make the swooping run.”

Litt said Wander had been a great addition since joining his stable two years ago.

“He cost a bit of money early and has been very consistent, a great old campaigner.

“There’s nothing wrong with those Godolphin horses. They’ve been holding up my stable for years.”

Jones, who is leading the NSW Apprentices Premiership, said the step back in class had helped Wander.

“He hasn’t been too far way in his previous runs and made it look easy today. “There was good pace in the race, and I was able to flop him out and have him where he was comfortable.”

Wander ($4.40), beat the Denim Wynen trained Dual Escape ($26) by more than a length, with the locally trained Mosht Up ($8.5) from the Stephen Schofield stable, third.

A dominant victory to the Gary Portelli trained Amoretti, who appreciated the step up in distance and sting out of the ground, to take out the 1600m MAINSTREAM TAXATION & ACCOUNTANCY SERVICES CLASS 1.

Louise Day gave the four-year-old a great ride just behind the leaders, circling the field on the turn and drawing away to win by almost four lengths.

The Verrazano gelding, a $90,000 yearling, was fourth at Wyong at his last start on November 26, having broken his maiden at Newcastle over 1200m in May.

Portelli said it was great to see Amoretti finish off the race so strongly.

“It was good to watch. His first time over the mile and with blinkers on and Louise got him into a really good spot,” he said.

“He looked good going through the line.

“He has a pedigree that suggests he’s more of a speedster but the way he went through the line he might get further.

“This horse has been quite promising for a long time. He had a lot of shin soreness early, but he kept improving.

“I know today wasn’t the strongest race in the world, but I like the way he did it. If he can get further, it opens up a lot of doors.”

It was a race in two in the final stages of the MAINSTREAM FINANCE SERVICES PTY LTD 4YO & UP MAIDEN with Chateaux Park getting the edge over race favourite Jesse James.

The Jason Coyle trained four-year-old has been racing consistently but was unable to break through for a win until start nine.

He was coming off a third at Canberra when resuming and Coyle expected the 1350m Wyong trip would suit.

Jason Collett had to cross from the widest barrier and was able to settle the four-year-old midfield, before drawing level with the favourite on the turn.

The pair battled it out in the straight, with Chateaux Park ($6.50) going to the line a length ahead of Jesse James ($1.80fav).

“I’m really happy with the horse. I’ve had a bit of time for him for a while now and he will take plenty out of that win,” Coyle said.

“Jason had to overcome a wide barrier and it was a good, strong win.

“I would think he will get further on the back of that sustained run today. The form around the favourite has been okay, so hopefully he goes on with it.

“I probably raced him a few extra times than I should of as a young horse, but hopefully that racing holds him in good stead moving forward.”

The Godolphin trained Jana ($3.80) was third, four lengths behind the winner.