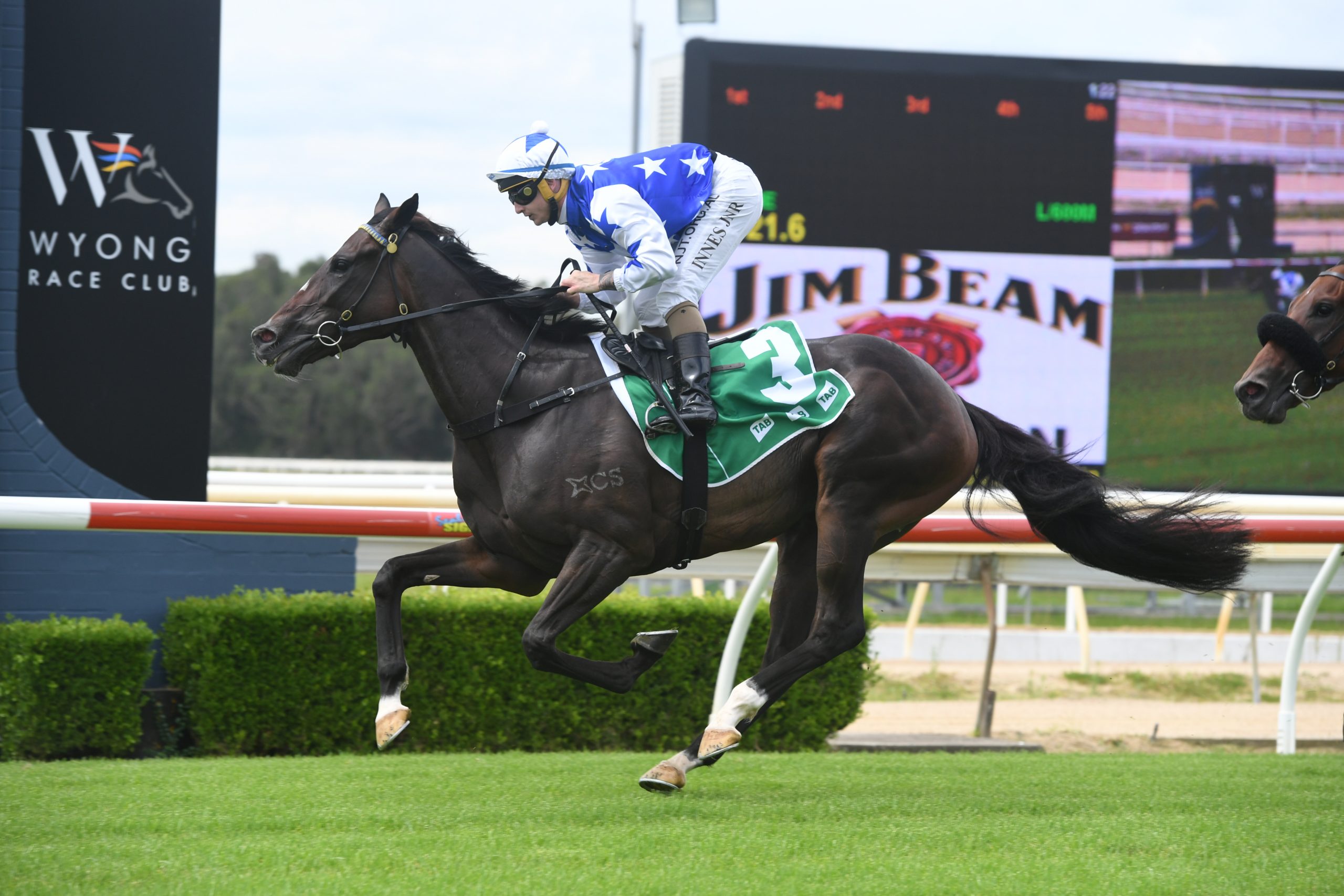 Gerald Ryan and Sterling Alexiou took out the training honours while Jason Collett rode a double, in a great day of racing at Wyong.

Kim Waugh’s The Bullring raised the flag for the locals while Godolphin filly Siege impressed with a tough win.

Check out the race-to-race highlights below.

A confident ride by James Innes Jn secured victory for Just A Jedi ($3.50) in the JIM BEAM CLASS 1 & MAIDEN.

The three-year-old looks to have the makings of a promising stayer, impressing at his first attempt over the 2100m.

Trainers Gerald Ryan and Sterling Alexiou had concerns about the extra distance but the Free Eagle gelding put paid to that, posting a length win.

“Jimmy (Innes Jnr) gave him a confident ride and that was the difference,” Alexiou said after the race.

“He sat and waited patiently and knew the horse was going to be there when he asked.

“He’s always shown us good ability at home, but I think in time he can be a more than handy stayer.”

A $60,000 yearling, Just A Jedi (pictured), brought up back-to-back wins with the victory, having greeted the judge at Gosford over 1600m on February 4.

A race to race double for the Ryan/Alexiou stable with Le Vizir ($7.50) winning the SKY RACING METRO & PROV MAIDEN over 1350m.

The three-year-old, resuming from an eight-month spell, dictated terms throughout and was able to hold out the fast-finishing favourite, Lady Of Luxury ($1.30), on the line.

Winning rider, Robbie Dolan, was impressed with the colt’s victory, in only his third race start.

“He’s learning and the best is definitely ahead of him,” he said.

Alexiou agreed believing Le Vizir will get over more ground in time.

“He’s always shown a good amount of ability at home but taken a long time to come to hand.

“A bit of cut in the track today and a good ride by Robbie has certainly helped him.

“I think he will get out over a trip and time is going to be his best friend. He obviously wobbled around the turn and was on the wrong leg today but was good enough to hold them off late.”

Our Flaming Moes ($21) from the Matt Dunn stable was third.

A thrilling three-way finish in the DE BORTOLI WINES 2YO MAIDEN with local galloper The Bullring ($2.80) holding on for a narrow win.

The Kim Waugh trained gelding led throughout the 1300m trip and looked to be on track for an easy victory before late challenges by Tea Leaves and Geisel.

The judge was called to separate the trio with The Bullring getting the nod by a short half head much to the relief of the stable and connections.

“It was close but he’s a lovely horse and it’s great to get the win,” Waugh said.

“It was disaster at Scone at his first run. He missed the start badly and flew home.

“I was worried about him getting the 1300m today, so I don’t think I’ll do that again in a hurry, but he hung on and did very well.

“He had to tough out it but fought hard and is still very new and very green.

“Jason Collett rode him beautifully. He’s going to be a nice horse and is still six months away.”

He beat the Waterhouse/Bott trained Tea Leaves ($9), with Geisel ($81), from the Perry stable, third.

Plenty of wraps for Godolphin filly Siege following her win on debut in the 1100m GREAT NORTHERN ON TAP 3YO MAIDEN.

The well-bred Street Boss three-year-old was caught wide throughout after drawing the outside barrier and still managed to score a convincing win.

Christian Reith couldn’t get cover from the wide draw, but Siege still had plenty in the tank on the line, winning by half a length.

“She wasn’t entitled to win with the run she had but I had no chance to get her in,” Reith said.

“I just had to have confidence that she would go on with it and she won with plenty in hand.

“She will take a lot of improvement from that. She was very good today and has a lot of upside to her.”

“She’s a nice filly and was quite impressive today.

“She’s extremely well bred and has the Merchant Navy bloodlines.

“She had a few little issues in her early days, but the stable has looked after her and given her plenty of time to strengthen up and build her confidence.”

The Ocean Park filly was given a great ride by Rachel King, who went from the rear of the small field on the turn, weaving a passage down the straight before drawing away to score a length and a quarter win over the 1350m.

“She did everything right today. Mark took the blinkers off and she was a lot more relaxed and very professional in the run.

“She was able to get on the back of a couple of horses going forward and was quite brave and put them away comfortably in the end.”

“We knew she had some talent and in her last run at Warwick Farm she was over racing, so it was good to see her settle today.

“She will go places.”

Class prevailed in the 1200m CANADIAN CLUB MAIDEN with the Clare Cunningham trained Impressive Lass ($2) putting paid to her opposition with a two-length win.

The Real Impact three-year-old had been racing in better company, coming off a fourth at Warwick Farm on February 10.

She appreciated the drop in grade and showed a good turn of foot in the straight to draw away from her opposition.

“We’ve always had time for this filly,” Cunningham said.

“She’s always shown nice ability and I hope the confidence she gets from this win propels her forward.

“I’m happy with her, she showed a nice dash and it’s very good to see her put it together.

“I always thought she might get over bit further and we’ll head her through the grades now.”

Jason Collett, who brought up a winning double, was caught wide from the barrier.

“I was really confident despite being wide.

“It was the spot I wanted to be and worked out perfectly. I had plenty of horse coming into the straight.”

The Godolphin trained Jadida ($4.40) was runner-up, with an eye-catching run by Oh Golly Gosh ($61) from the Attard stable, for third.

A great front running ride by Serg Lisnyy secured victory for the Denim Wynen trained Dual Escape in the TAB.COM.AU BENCHMARK 64 over 1100m.

The Dubleo mare brought up her fourth win for the young trainer, who relocated from Wyong to Port Macquarie last year.

Dual Escape, the $31 outsider of the field, pinged the gates and was taken to the lead by Lisnyy, who defied the racing pattern of the day and hugged the rails.

The seven-year-old mare gave a kick on straightening and was able to hold out her opposition to win by half a length.

Wynen said Dual Escape still had trouble getting to the gates.

“She never changes but when she’s like that is when she runs her best races.

“I worked for Kristen (Buchanan) when she had her so have known this mare from the word go.

“When she offered her to me, I was keen to take her and it’s great to get her fourth win up, especially another provincial win.”

The Dundeel five-year-old out of Miss Finland, hadn’t tasted success since a Randwick victory in November 2018.

Tommy Berry sat just behind the leader and short priced favourite Bojack ($1.50) before bringing him to the front on straightening and drawing away to win by half a length.

“Hopefully that win gives him a lot of confidence,” Berry said.

“He’s always had that sort of ability and has been racing in much tougher grades.

“Coming back to the provincials suited him and hopefully he can go on with it now.

“He gave me a really good feel and can hopefully go on with in in the city.”