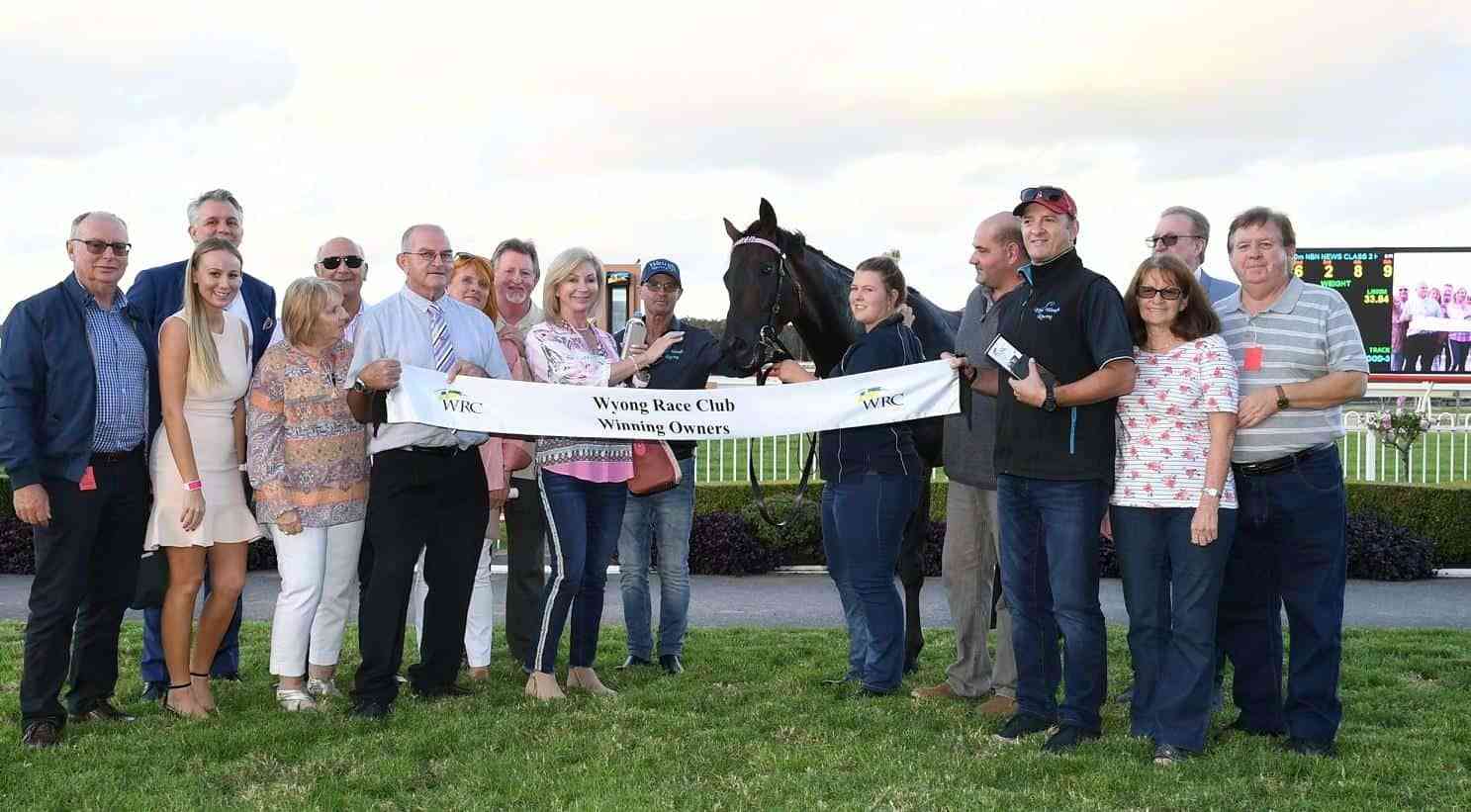 Waugh said she was excited about the prospects of the Darci Brahma gelding, purchased for $125,000 at the 2017 Ready To Race sales.

“He’s still six months away from his best,” Waugh said after the race. “He’s an exciting horse.”

A large group of happy owners congratulated Waugh and winning rider Jason Collett, when he returned to scale.

The win brought up a double for Collett, who shared the riding honours with Brenton Avdulla.

“He’s a really lovely horse,” Waugh said. “We brought him at the breeze up sales and paid good money for him, so it’s good to see him winning again today.

“They are a great group of owners and this horse is going to keep improving.”

Collett settled Trumbull just off the pace, hitting the lead in the straight where he was able to hold off challengers from the fast finishing Moccasin Miss and Bare Naked Lady.

Collett was also full of praise for Trumbull.

“I knew I had them covered and he sprinted really well,” he said.

“He raced a little bit keen, but he knows how to win.”

Trumbull, who was sent out $1.70 favourite, beat the Portelli trained Moccasin Miss ($11) by a neck.

Reiby’s Regent has always been a special horse for Jason Attard, and after breaking through for his debut win the Hawkesbury trainer believes the colt has a bright future.

“I delivered him, and I delivered his mother as well,” an excited Attard said after the three-year-old’s two-length victory in the 1350m GOSFORD RENT A TRUCK PROV & CTRY MAIDEN HANDICAP.

“I broke him in too and have always had high hopes for him.”

Attard said Tommy Berry, who rode Reiby’s Regent to victory, had also given him his first city winner on the colt’s mother Reiby Regina.

“It’s a lovely story all round. This bloke is a bit of a blockhead and is still learning.

“I had high hopes coming here today that dropping him back in distance would give him confidence and that’s what happened.

“It was a super ride by Tommy. He rode him like he was the best horse in the race and that’s how it panned out.

“I do have plans for him, but I’ll see how he pulls up from here before deciding what we do.”

Berry said the Uncle Mo colt, having his fifth start, was a “very big, green bugger.”

“He’s still doing a lot wrong and I think he’s a horse who will be much better next time in.

“Jason has always had an opinion of him, and I think he has a bright future.”

A step up in distance proved the key to the Kris Lee’s trained Grand Bouquet’s victory in the 1600m HARVEY NORMAN CLASS 1 HANDICAP.

The $600,000 Savabeel filly brought up her second win after resuming at Newcastle on March 21.

Cameron Swan, representing the Lees stable, said Grand Bouquet ($6) had appreciated the step up to 1600m.

“Her run the other day was good. She got back and dropped the bit a little bit and got further out of her ground than we would have liked, but it was still a good run.

“Aided by a good ride today it was great to watch. Even though she was last, she was travelling all the race and she was very good late,” he said.

Jockey Brenton Avdulla, who brought up the first leg of a winning double for the Lees stable, said it was a good job by the filly.

“She ran well the other day. Kris decided to take the blinkers off her and today up to the mile, with the run under her belt, she did a good job.”

Grand Bouquet ($6), beat the Godolphin runner Loveseat ($4.20), with the $3.90 favourite Plagiarist, from the Waller stable, third.

A race to race double for the Lees/Avdulla combination after Lucky Mission ($2.60) showed an impressive turn of foot to win the JIM’S MOWING CENTRAL COAST & NEWCASTLE CLASS 1 HANDICAP over 1300m.

Avdulla settled the gelding just behind the leaders, bringing him to the lead on straightening, before pulling away to score a convincing two length win.

Raced by Ron Wanless, the $260,000 Shamexpress gelding, was second up after resuming with a fourth at Newcastle on March 21.

“It was pleasing to see him race like he did today,” Cameron Swan, representing the Lees stable, said. “Through the run he was really good, had a nice head carriage and a nice run. Although he did wander late for the most part, he was good which was very pleasing.

“He’s still got a little bit to learn but he’s a nice horse going places.

“The Wanless family are a great supporter of the stable so it’s good to get another winner for them.”
Avdulla said he always felt in control of the race.

“He’s still got a few tricks but with the run under his belt I was able to be a bit more positive today. He’s got ability and is a good prospect going forward.”

An upset in the 1350m BAYVIEW HOTEL MAIDEN PLATE with the Anthony Cummings trained Something Fast ($26) proving too strong for the $1.85 favourite Tapiconic.

Ridden by Travis Wolfgram, Something Fast was headed by the favourite in the final stages but fought back to win by a half neck.

Stable representative Steve Oliver said the Smart Missile gelding, having only his second start, still had plenty of improvement.

“He will take a lot out of that today. He is still pretty green and doesn’t know much, so the win will do him good.”

Wolfgram agreed, describing Something Fast as “a big raw horse.”

“I spoke to Anthony this morning and he said the horse has been working well. He came here quietly confident that he would run a good race,” he said.

Provocative Man ($8.50), from the David Pfieffer stable, was third.

A mid-race move by Jason Collett proved to be the winning formula for Sepoy filly Visibly ($7) to break through for her first career win.

The three-year-old showed she was the superior stayer on the day, taking out the 2100m FREDDY’S FISHING MAIDEN by a half neck.

Collett had planned to lead on the Brett Cavanough trained Visibly, but when he was unable to do so decided to settle toward the rear of the field.

He became concerned with the slow tempo and took off around the 800m mark, circling the field.

“She got into a good rhythm and was able to tough it out in the end,” Collett said.

Stephanie Alexander, representing the stable, said the filly had done plenty of work in the race.

“There was a lot of merit in that win,” she said.

“She just kept grinding away and was the best stayer on the day.”

The Bernadini filly out sprinted John Thompson’s race favourite Cops And Robbers ($2.90) and her stablemate Pretorius ($3.50) to score a convincing two and three quarter length win.

The three-year-old was resuming from a spell and coming off a third in a Warwick Farm trial on April 1.

“She is full of nerves but was able to control herself today. It was a strong speed, but she was good late.”
Stable representative Darren Beadman, said Parr had given the filly a lovely ride.

“She’s just that little bit stronger this time in. She’s 15-20 kilos heavier. It was nice to see her put them away like she did.

“She’s been a work in progress. She’s a little bit fractious in the gates the last few times but the penny is starting to drop with her, and she will gain a lot of confidence out of that.”

Beadman said it was likely the stable would target a metropolitan start for Handspun’s next run.

Glen Barnes was full of praise for Lee Magorrian following his winning ride on the Waller trained Be Mindful ($10).

The Pierro gelding brought up his third win this preparation in the JOB CENTRE AUSTRALIA CONDITIONAL BENCHMARK 70 HANDICAP over 1350m.

In a skilful ride, Magorrian brought Be Mindful from the rear of the field, weaving a passage between runners and storming home over the top of his rivals.

“It was a great ride from Lee. I could see how well the horse was travelling and it would have been a hard luck story if he didn’t win. He showed good speed to run down the leaders and win,” Barnes said.

“It’s his third win this preparation. He’s taken some big steps forward and continues to do so. He is very explosive. When he found the gap today, he really hit the line well.”

Magorrian said it had been a muddling run race.

“I had to get back, but it worked out great in the end when the runs came for me,” he said.

Ross Still’s galloper Blinkin Artie ($6.50) appeared to have the race won but was run down on the line, beaten a short neck. Wild About Her ($14) trained by Kylie Gavenlock, was a half-length behind in third.