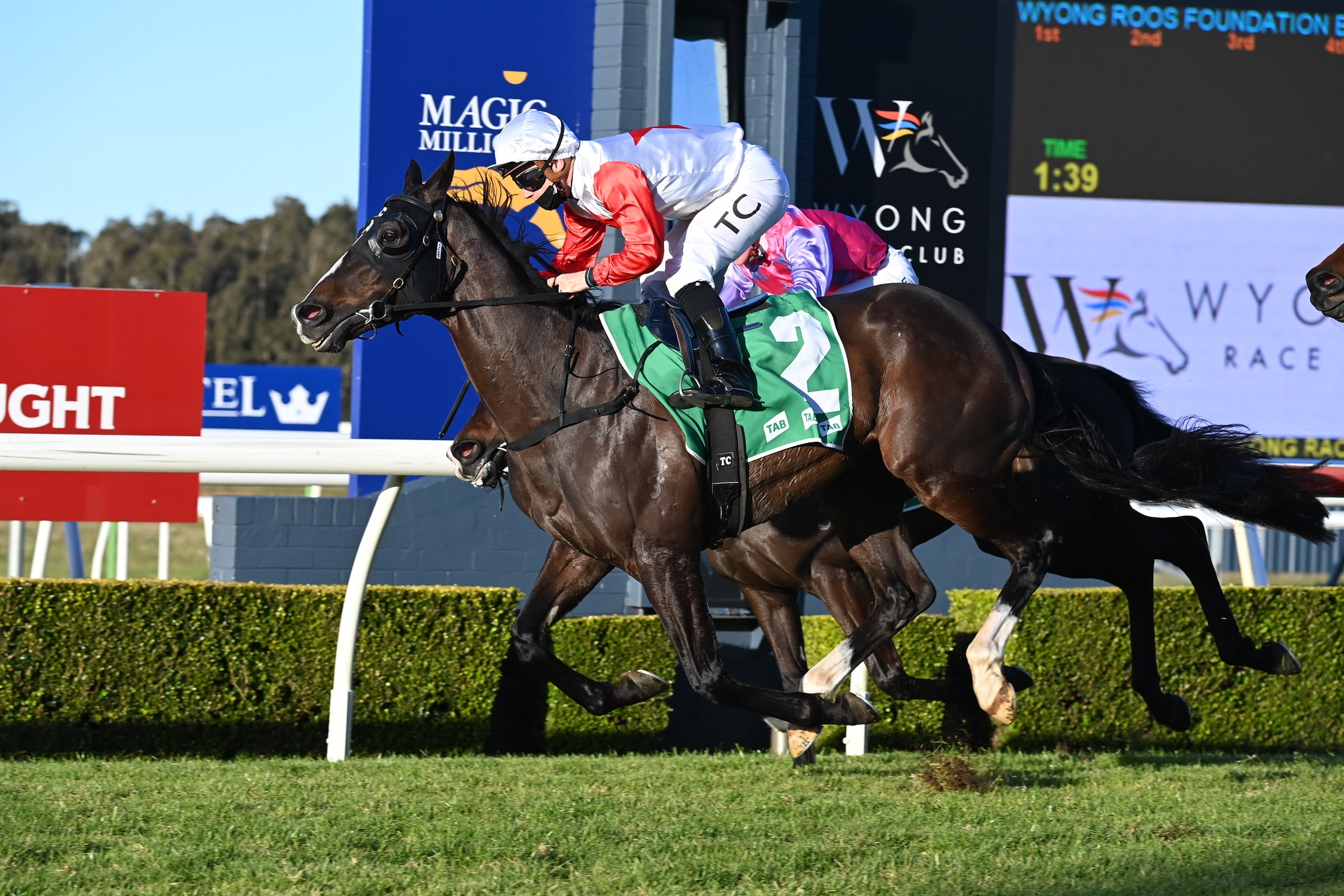 DEAD-HEATS abounded today – but not in races!

Jason Collett and Tim Clark fought out the Jockeys’ Premiership at the final meeting of the season, with Collett claiming the title by one, with 12 wins.

Collett fired the first salvo by winning the opening race for Chris Waller to gain a three-win lead, but Clark pegged him back winning both the fourth and seventh races for Gai Waterhouse and Adrian Bott.

Tom Sherry (now a senior rider) and Reece Jones could not be split either in the apprentices’ premiership, and were also declared joint winners.

The Waterhouse/Bott stable secured another Wyong Trainer’s Premiership with their double.

On the racing front, the meeting produced several promising horses which can be followed with confidence.

Frankel three-year-old Phosphene made a winning debut in the opening race, and Savabeel two-year-old Major Beel was also impressive in taking the fourth at only his second appearance.

Hawkesbury mare Yes You Think hasn’t had a lot of racing either and her victory from an awkward draw and coming from well back in the fifth was a definite sign of better things ahead.

SYDNEY supremo Chris Waller struck early – but it wasn’t with the horse most punters wanted. I Am Geronimo ($3 favorite) was well backed and took over near the 700m after beginning well, but was a sitting shot in the straight and stablemate PHOSPHENE ($7.50) swept down the outside to snatch victory from Nullify ($3.80) and Tracey Bartley’s Dresden ($14). I Am Geronimo battled on to finish fourth. Frankel three-year-old PHOSPHENE was making his debut after finishing last of nine runners in a 740m trial on the Warwick Farm synthetic track on July 6. He is the first foal of the American-bred mare Posing, and looks to have a bright future, especially as he was slow to begin today and was still able to win. Stewards fined apprentice Pat Scorse $300 for failing to claim down to his minimum weight, and replaced him with fellow apprentice Reece Jones.

DUAL licence holder Blake Fitzpatrick ended the season on a winning note when DANZETTE ($5.50) came of age. The well-known harness racing trainer-driver produced the former Sydney mare first-up at start no. 21 with only a recent 785m trial at Hawkesbury to ready her. Not unlike the first race performance of the winner, apprentice Jackson Searle circled the field from near last at the 600m and brought her with a well-timed run to overhaul Loniesha ($3.30), who was slowly away and had eased dramatically from an opening quote but still started favorite. Limpida ($6) gave plenty of cheek and battled on gamely to be beaten less than a length and suffered interference near the line. An $80,000 Melbourne yearling purchase, DANZETTE had been placed on seven occasions, so a breakthrough was indeed overdue. Searle’s win was soured when stewards charged him with careless riding near the winning post, taking the runner-up in onto the third horse, which had to be checked. Searle’s suspension begins on August 7, and he can return a week later.

FAVORITE punters finally got on the board when PACIFIC WARRIOR (backed from odds against into $1.95) got home, but there wasn’t much in it. Josh Parr always had the American Pharoah three-year-old in touch after beginning awkwardly, and he gamely beat Riccos ($6) and Walk Up Start ($16). A $175,000 buy at Inglis’ 2020 Australian Easter yearling sale, PACIFIC WARRIOR was having his fifth start for trainer Anthony Cummings and appreciated getting up over a longer distance. Nosey Parker ($4) gave away too much start and finished on gamely into fourth placing.  Only a two-year-old, he is open to further improvement.

AS with the opening winner, this youngster looks headed for better wins. MAJOR BEEL ($7) was the outsider of the Gai Waterhouse-Adrian Bott pair as stablemate Sightseer ran a $2.10 favorite and had to be content with third placing. MAJOR BEEL, a rising three-year-old by Savabeel, was strong through the line and is going to be even harder to toss as his distances are increased. He raced keenly in the early and middle stages and was still too good for his rivals. A $260,000 Magic Millions yearling purchase, he can win again – and runner-up Manzoice ($21) also hit the line with purpose and is another to be followed. He was slow to begin on debut.

HAWKESBURY trainer Blake Ryan has a good opinion of YES YOU THINK ($15), who was having only her second start for him after previously being prepared at Gosford by Angela Davies, who won a Taree Maiden with her in February. This daughter of international star So You Think drew awkwardly, but rider Regan Bayliss allowed her time to settle and get cover, then circled the field from the 600m to nab $3 favorite Siyata in the shadows of the post. “She has plenty of upside and I really like her,” Ryan said. “I won’t be surprised if she wins a midweek race in town or even a Saturday Midway Handicap. “Her coat is still a bit patchy, so there is definitely further improvement in her.” YES YOU THINK was examined by the club vet behind the barrier when blood was noticed in her near side nostril, and cleared to start.

WYONG trainer Kristen Buchanan kicked up for the local side when she scored with $8 chance BULLET WING. The gelded son of Bull Point fronted up for only his fourth start, and was game in edging out $2.45 favorite Navajo Peak, who would have clinched the jockeys’ premiership for Tim Clark had he been successful. Fourth placegetter Real Key set up a decent tempo, but the winner sat third and cruised up with intent on the home turn. He didn’t shirk his task in the straight as the favorite made a late challenge. Tick Tock Boom was a late withdrawal on veterinary advice, and trainer Annabel Neasham will have to produce a vet clearance before he can trial or race again.

CLARK brought up a double, falling just one short in the Jockey’s Premiership, when STAR SPARKS ($4.60) humped 61kg to defeat locals Buba ($2.90 favorite) and $21 outsider Sian. The Medaglia D’Oro four-year-old is building a neat record; this being his fourth win at his seventh start. He made the running and bounced back from a Sandown failure on heavy ground on June 15. Buba tried hard in the last 200m but couldn’t quite peg back the winner, whilst Sian did an excellent job to hang on as he did after doing plenty of work racing outside the leader and eventual winner.

Another case of déjà vu where the longer-priced of the stable pair won. Emergency EUPHRATES DREAM ($17) nudged Belladeel ($10) in a tense finish, whereas stablemate Lake Kistoria ($6.50) beat only two home. Ironically, Willie Pike had partnered the winner at her previous start when runner-up at Hawkesbury on June 30, but this time rode Lake Kistoria. Pike told stewards his mount travelled comfortably in the early and middle stages, but didn’t respond when placed under pressure passing the 300m. However, he also considered she would benefit from today’s outing, which was her first in 12 months. Stewards will follow up with trainer Matthew Smith on the mare’s condition in the coming days. Dijon was solidly supported to start $3.20 favorite and ran another honest race to finish third after getting a break on straightening. He has now been placed at all three runs this preparation.