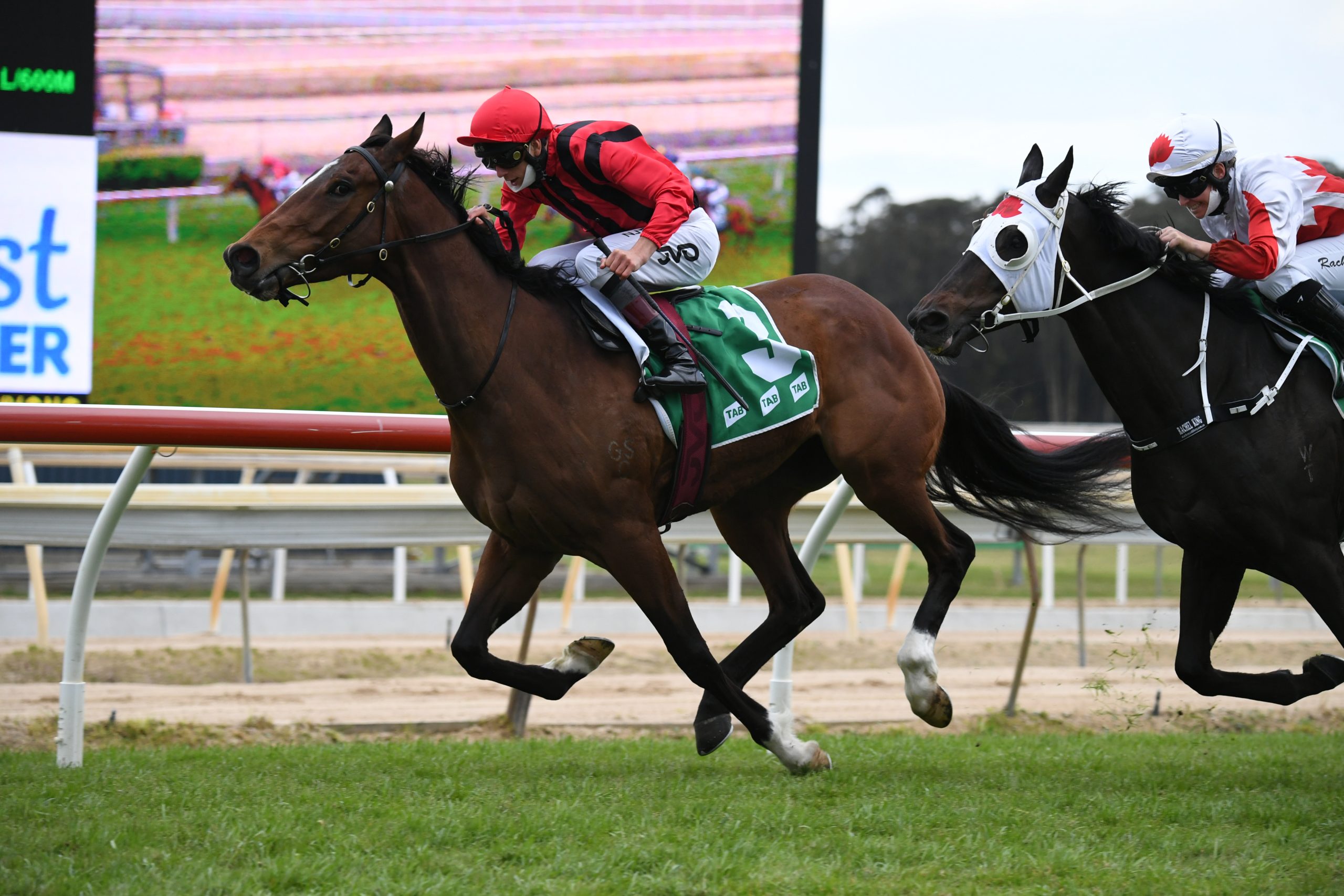 The four-year-old Snitzel mare earned automatic entry to the Cup by claiming the Prelude and the stable will have no hesitation backing her up if she comes through the run well.

“She’ll be back up here Friday provided she pulls up well,” racing manager Neil Paine said.

It was a big day for the stable, who took out back-to-back races with Perfect Radiance and Anotherthinkcomin’.

Sam Clipperton dominated the riding ranks with a treble, while James Cummings bookended the meeting, with winners in the first and last.

The impeccably bred daughter of Vancouver, out of a Domesday mare, was a $950,000 Inglis yearling.

She was coming off a second over 1500m at Goulburn on August 14 and well fancied in the betting, sent out $2.35 favourite.

Clipperton took a stalking role in the small field, settling Iolanthe toward the rear, before taking off before the turn and hitting the lead on straightening.

She drew away to win by a length over Speedzone ($3.40) from the John Thompson stable, with the roughie of the field, Dale Riley’s Muwarad ($61) third.

“It was a good ride by Sammy, he judges the pace well. It was a nicely run race for her and she was able to sit back and get the last shot at them.

“She’s always shown nice promise and James has given her time and let her build into her frame.”

Hugh Bowman had to work hard in the final stages to claim victory for the short priced favourite Amore.

The well-bred Savabeel mare, from the Brad Widdup stable, was held up for a run in the straight before Bowman found a passage on the rails.

She sped to the line and looked to have the race won before a late challenge by the fast-finishing Grecian Lass ($5.50), from the Lees stable.

The judge was called to separate the pair with Amore ($1.55) getting the nod.

The Adam Duggan trained Gold Invest ($21) was a length and a half behind in third.

The winner, a $270,000 Magic Million yearling, was bred by Gerry Harvey and is raced by George Altomonte from Corumbene Stud.

She was having her fifth career start, having been unplaced in her previous four.

Lady Of Luxury continued a great weekend for the Bjorn Baker stable, breaking through for her first win at start 11.

It was a well-deserved win for the Criterion mare, who had been runner-up on four occasions last preparation.

She resumed with a narrow win after coming from behind in the straight to run down Snowden’s $2.80 favourite Warmth in the final stages.

Andrew Atkins had settled the Criterion mare midfield, before taking off just before the turn with a sustained run and claiming victory on the line.

She was coming off an impressive trial win at Warwick Farm on August 17 and looks to be in for a strong preparation.

Torinda ($11) from the Joe Pride stable, was third.

The in-form Baker stable claimed the Group 3 Premiers Cup at Kembla on Saturday with Harpo Marx.

John O’Shea’s Arthur Francis resumed a winner, proving too strong in the final stages of a strong 3YO Maiden, with Regan Bayliss in the saddle.

While unplaced at his two Metropolitan starts last preparation, he finished fifth in the $2million Inglis Millennium before spelling.

Both his trials since resuming were impressive, his latest an eye-catching win over 1045m at Randwick on August 20.

He looked well placed in the Wyong maiden and was sent out $4 favourite.

Bayliss was happy to sit off the speed, before circling the field on straightening and drawing away to win by a length.

He beat Deep Snow ($8) from the Ryan/Alexiou stable, with Dalchini ($5.50) trained by Lee and Cherie Curtis, third.

The hard luck story was the Godolphin trained Testimonial, who was finishing strongly along the rails before clipping the heels of tiring Sterny Bear, and almost falling.  Definitely one to follow.

Gai Waterhouse considers Anotherthinkcomin’ to have a bright future after he brought up his second win in impressive style.

The Vancouver gelding got the upper hand in the final stages of the race and was able to record a half head win.

It was a race in two in the straight with Anotherthinkcomin’ ($6.50) and the Portelli trained Mystic Vein ($6.50), fighting it out to the line.

The win brought up a race to race double for Regan Bayliss.

Neil Paine said Gai had been “over the moon” with the win.

“She believes the horse has got a bright future. She was really impressed how he attacked the line,” Paine said.

“He didn’t give up and that’s just how we like our horses to be. We are rapt.

“He didn’t handle the heavy 8 at Goulburn last start but it’s a much better surface at Wyong, the track is racing beautifully.”

Both Anotherthinkcomin’s wins have been at Wyong and Paine said they would be looking for another 1350m race at the track.

Perfect Radiance could back up in next Friday’s Carlton Wyong Gold Cup following her dominant win in the Prelude.

Jean Van Overmire led from start to finish on the Snitzel mare, who was able to hold out the Matt Dunn trained favourite Deadly Impact ($4), to record a   half-length win.

It was the four-year-old’s first hit out over the 2100m and she had no problem with the distance and was strong to the line.

Neil Paine said he expected the stable would now push on to the Cup, with Perfect Radiance earning automatic entry.

“Gai’s over the moon,” he said. “This horse has gone from strength to strength, and she really showed some fortitude today.

“Providing she pulls up well she will be back up here next Friday over the 2100m.

“Gai and Adrian have improved this horse out of sight. They seem to have the knack with Goree horses. They love her training.

“Jean rode her a treat. He rated her so well in front, kept her in her rhythm and was quite strong over the last furlong.”

Overmire said the stable had done a fantastic job with Perfect Radiance.

“She just keeps thriving,” he said. “She was travelling beautifully from the 800m when I started to increase the tempo, and again from the 400m.

“She showed a great turn of foot and is going really well.”

Perfect Radiance, coming off a win over 1850m at Newcastle on August 11, was sent out the $6 second favourite.

The win brought up a race to race double for the Waterhouse/Bott stable.

The Bull Point four-year-old, has been in great form since transferring to the Dunn stable, with two wins and a placing from just four starts.

Another great ride by Sam Clipperton, helped secure victory for Crazy Train who was sent out $4.80 favourite.

After settling midfield, Clipperton took off on the turn and was able to draw away in the final stages to win by two lengths.

Dunn said it was great to see the mare perform so well.

“It was really nice to see her turn up and do what she did today – full credit to her,” he said.

“She’s got really good ability to quicken if she’s given a soft time and that’s what happened today.

“Sam rode her perfectly and gave her every opportunity to get to her top speed late.

Buba ($6) from the Ryan/Alexiou stable was second, with John Sargent’s fast finishing Land Ahoy ($7.50), the one to follow.

Virgo continued the trend of the day for close finishes, snatching victory on the line to bookend the meeting for Godolphin.

The Zoustar mare brought up a treble for Sam Clipperton, who came from behind in the straight to secure victory by the shortest margin.

Virgo was coming off a fourth at Goulburn last start, and well supported starting at $5.50.

Darren Beadman said they had been pretty confident coming into the race.

“She’s been in good form and was a city class winner last preparation.

“On that past form I thought she’d be pretty hard to beat and that’s the way it panned out.”

Longbottom ($4) from the Lees stable was second, with Brett Partelle’s Perfect Style, putting in a strong home track performance to finish third.