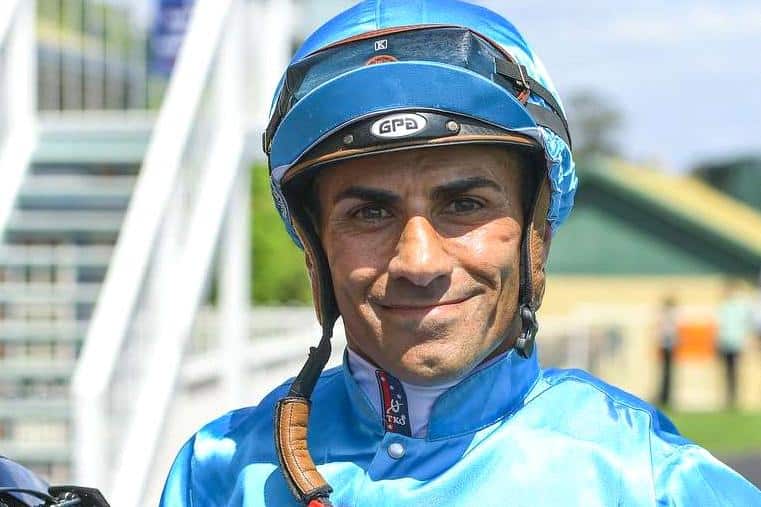 A treble to comeback jockey Jeff Penza and a win for veteran local trainer Stan Thomas were the features of Saturday’s Wyong Race meeting.

Penza, who returned to the saddle two months ago after being sidelined for almost a year, is back to his best and recorded wins on John Sargent’s stayer Tyrrhenian, Godolphin’s promising gelding Suave and on Rabbit Clause for Joe Pride.

Ocean Park gelding Tyrrhenian ($6) removed any questions about his ability to stay, taking out the 2100m WYONG MAGIC MILLIONS DECEMBER 12 CLASS 1 & MAIDEN PLATE by a length and a half.

Campbell, representing the Sargent stable, was complimentary of the ride.

It was a good ride by Jeff, he used his brain. The horse wanted to go forward and he took the race by the scruff of the neck and showed today he can stay.

“It was a race winning move by Jeff at the 600m and he went on with it really well. John thought he would run the trip and he proved him right today.”

Penza’s second win was on the well-bred Suave ($1.55) who brought up back to back wins in the WWW.TAB.COM.AU CLASS 1 HANDICAP over 1350 metres.

The four-year-old won on debut at Hawkesbury on October 24 and was even more convincing bringing up his second victory.

“He will bob up in a better race somewhere. He comes from a good family and he will go a long way. He’s very casual which will take him a fair way. “We will step him through the grades and see where we end up.”

Penza also has a high opinion of Suave.

“He’s a slow learner and started his career as a colt and wasn’t going anywhere. He had to start from scratch this preparation and has come out and had two wins. I think he’s got a long way to go.”

Penza rounded off his treble riding Rabbit Clause ($4.40) to victory for Pride in the 1000m DE BORTOLI WINES MAIDEN PLATE.

The three-year-old got the nod in a tight finish from Matowatakpe ($3.10fav), from the Baker stable, the pair fighting it out in the final stages of the straight.

Pride was impressed with the performance of the first starter and believes he is in for a good preparation.

“His trial coming into today was good and we came here with plenty of confidence. It was a great ride by Jeff and always good to get the maiden win out of the way.”

Godolphin’s runner Mercury ($3.40), was more than two lengths behind in third.

Ridden by Mikayla Weir, the six-year-old mare brought up her sixth win from 45 starts.

In a well-timed ride, Weir came from the rear of the field at the 600m mark, hitting the front on straightening and pulling away from her rivals to win by almost two lengths.

It was a popular win for the 82-year-old trainer, who has two horses in work on the track.

He was full of praise for the consistent mare, who he owns himself.

“There were excuses last start and I was reasonably confident today,” the 82-year-old trainer said.

“She’s been a great horse for me. She tries hard every time she goes around and that’s all you can ask.”

Ondo Pasa was sixth at her last start at Wyong on October 20 over 1300m but was beaten only just over a length. She last tasted victory in March but has been placed twice since.

“It’s always good to train a winner on the home track and I’m happy today,” he said.

Rachael Murray recorded her first Wyong win since relocating to the area mid-year on the aptly named Dancing Rachel.

The Declaration Of War filly was purchased by trainer Gilbert Slattery for just $5000 and raised on the family’s property near Gosford.

The three-year-old was having her ninth start in the CHRISTMAS @ THE RACES DECEMBER 19 MAIDEN HANDICAP over 1600m, have been previously placed twice.

Murray took a sit toward the rear of the field, making her move around the 400m mark. She hit the front mid-way down the straight and let down strongly for a strong length and a half win.

“That’s a huge win today, Rachel on Rachel,” Slattery said. “She was unlucky last start at Gosford, and we lost the protest.

“She’s a good filly. She’s by the Melbourne Cup winner and I brought her as a weanling at Scone and we raised her at home.

“My grandson and my son do all the work so it’s a real family affair. “

“I asked Louise (Day) how to ride her and she said make sure her last furlong was the best. That was fantastic advice because the horse went really well. She settled lovely and raced the mile perfect.”

Hilton said they had taken their time with five-year-old.

“He had a few issues, so we gave him some time off,” he said. “We knew he had the talent and he’s a big strong horse but has had niggling issues.

“I was really pleased to get him back to the races today.

“I thought he could win today but may of been a little bit vulnerable over the 1000m. Aaron Bullock rode him in the trials the other day and gave him a really good push.

“His work during the week was spot on, so it’s great to get the win with him. I’ll keep him at the shorter trips. He’s got a good turn of foot and it was a great ride by Ashley (Morgan). “

Lerena made the move to Australia in August and Axe was his fifth win.

He rated the Written Tycoon colt well, with a good front-running ride, holding off his challengers to win by a half-length.

“He is a very nice colt, “Lerena said.

“He’s still quite immature and green and does things the wrong way but it was a win full of merit today.

“He shirked the start slightly and I had to chase them up to get to the lead. It enabled him to build up some gears and he kicked away in the straight.”

Blake Spriggs was in the winner’s circle, piloting Bollywood to victory for Godolphin, the first leg of a winning double.

Spriggs sat just off the pace on the $1.85 favourite, getting a split in the straight and chasing down the leaders to win by a length and a half.

“She deserved the win,” Spriggs said.

“She’s not the best horse in the stable but she tries very hard and that is evident in her form. She keeps running around the placings, but she won well today.

“She had a bit of a job to do getting the 1350m, and I thought that would be her maximum distance wise. She got out and won well.”