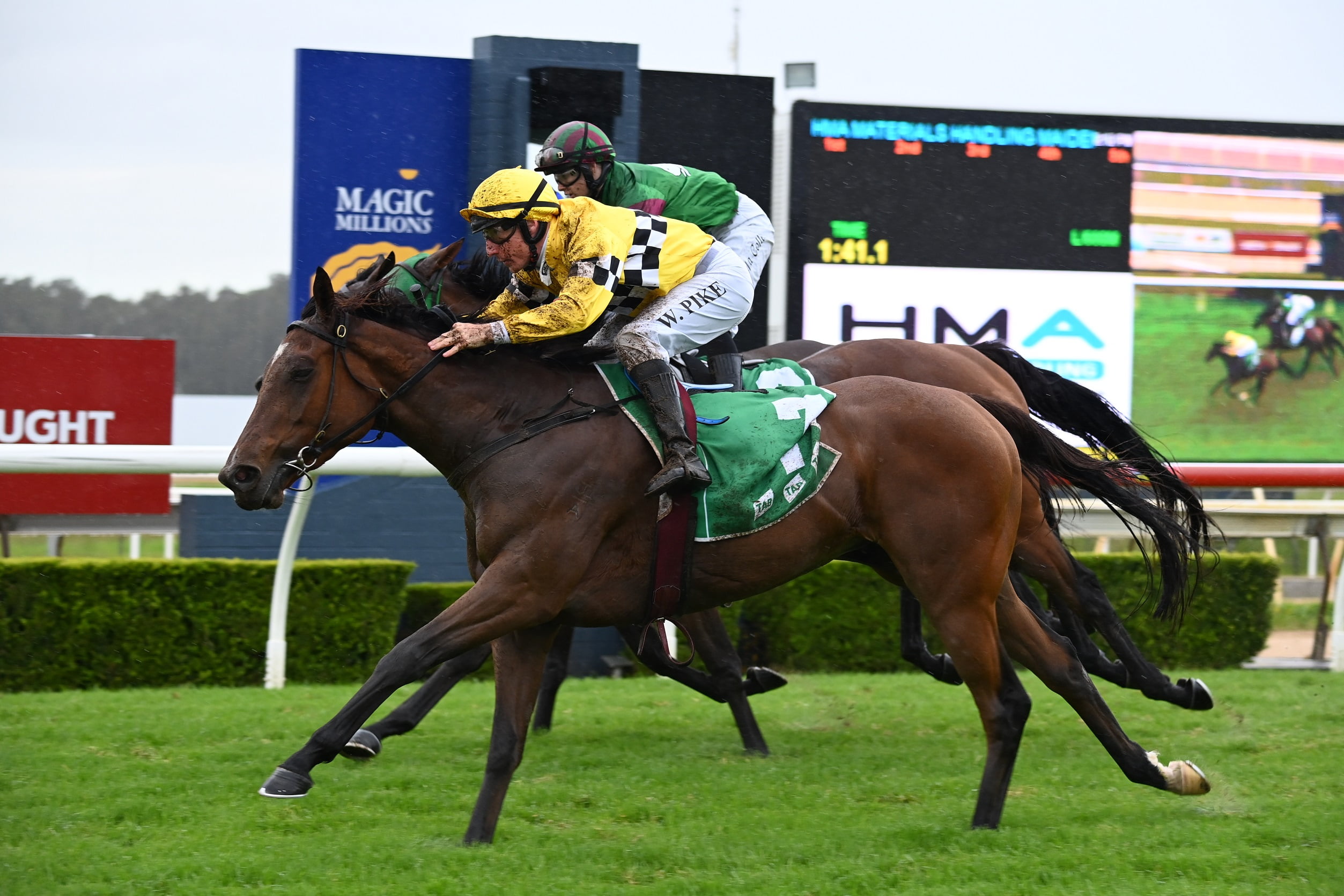 It was the John O’Shea and Willie Pike show at a rain affected Wyong meeting, the pair teaming for a race to race double.

Pike piloted the O’Shea duo Duke Of Gordon and Awesome Wonder to victory, the latter being targeted towards the Queensland Oaks.

The locals weren’t to be denied with Kristen Buchanan’s One Way Street returning to form to take out the 1200m Maiden.

The last two races on the card were abandoned after heavy showers continued throughout the afternoon.

The result was never in double for the Annabel Neasham trained African Daisy who justified her short price with an effortless win.

The American Pharoah filly was resuming from a spell and Neasham had her primed for victory, with two impressive Warwick Farm trials.

It was an easy watch for punters, with Brodie Loy taking an early sit behind the leader, easing to the front mid-race, before sprinting away to win by more than five lengths.

Raphael Marchelli, representing the stable, said they had been confident leading into the race.

“She had two nice trials and looked very sharp,” he said. “She likes heavy tracks too so we knew that wouldn’t be a problem. She looked like a winner a long way out and we were happy with that.

“Her coat wasn’t perfect, and she was green late, so there is still plenty of improvement to come.”

A change in tactics proved to be a winning move for Kristen Buchanan’s One Way Street.

The Super One gelding was taken to the lead by Hugh Bowman, who maintained the front throughout and despite tiring in the final stages, held on to win.

It was Bowman’s only ride for the day and Buchanan was full of praise for the jockey.

“He was the perfect rider for this horse, and I wanted to get his perspective on him,” she said.

“Clearly, he’s going to be one paced. We’ve tried to hold him up at his past two starts and it hasn’t worked, so we did things differently today.

“It was fantastic to see him win.”

One Way Street was sent out $2.40 favourite, based on his two placings on his home track in rain affected conditions in his first preparation.

It was another runner-up for Taree trainer Mark Stewart, with All Beans ($14) finishing strongly and not far off a win.

The daughter of Pierro was given a great ride by Reece Jones, who followed his boss’s instructions to a tee, settling the filly just behind the leaders.

She hit the front on straightening, sprinting away in the final stages to record her first win at start six.

The three-year-old was coming off a third at Newcastle over 1890m on April 9 on a heavy track.

Northam was impressed by the filly’s late turn of foot and pleased with the ride.

“I was pretty happy with that. She hasn’t figured out how to race properly and is the type of filly who the older she gets the better she’ll get.

“She showed a nice turn of foot, and it was good to see her kicking away at the end of 2000m. It was a really good ride from Reece. He hasn’t had a lot of luck with the barriers on this filly, but the owners have stuck with him, and he repaid them today.

“I trained her mother, Myamira and she was a super mare, so I’m hoping this filly will keep improving.”

Love Rules earned late support to start $2.60 second favourite, over the Maher/Eustace runner-up Bay Of Kiel ($2.40), who despite being momentarily held up in the straight, appeared to have every chance.

All About Ollie ($12) trained by Bruce Cross, was third.

The well-bred Galileo filly was unplaced at her three starts in Ireland before her move to the John O’Shea stables.

She had three trials leading into the Wyong race and earned some support in the betting, sent out $4 third favourite.

Willie Pike settled her at the rear of the field and looked to have a task ahead of him before setting sail around the turn and storming down the outside to score a narrow victory.

He ran down Ron Quinton’s Calm Down ($3.70) in the final stages, with the Widdup trained favourite Sneaky Island ($3) driving through on the line to secure second.

O’Shea has a good opinion of Awesome Wonder and is targeting the Queensland Oaks.

“It was a really good performance today. It’s difficult to make up ground and she came from last. She’s got a really bright future and is a real delight to train.

“She’s a full sister to a horse who was quite effective over the mile and half, and I didn’t think the distance would be a problem.”

The filly was purchased from Ireland by well-known owner/breeder Jason Abrahams who bred her mother, a Flemington Coolmore Stud Group 1 winner Nechita, who was sold on to Ireland.

A race to race double for John O’Shea and William Pike with Duke Of Gordon ($1.70) justifying his short price favouritism with a dominant win.

The Dissident gelding made it back-to-back Wyong victories relishing both the heavy track and distance.

Pike placed the three-year-old just off the early pace, drawing level with the leader before the turn and drawing away in the straight to win by more than four lengths.

O’Shea had been confident leading into the race, with Duke Of Gordon having improved since his Wyong win on April 14.

“He had improved at home, was fit and adept on the ground so I was reasonably confident,” he said.

“He relaxed a lot better today. It’s great for his ownership group, Go Racing, to have a progressive, young staying horse with a future. “

Clarry Connors was surprised when his mare Segrill got the nod in the closest finish of the day.

The five-year-old dived at the line to snatch victory over the short priced favourite Crazy Train to bring up her fifth career win.

“I thought she was in front a stride before and for a stride after but wasn’t sure she got there on the line,” Connors said. “Winners are grinners, so we’ll take it. She’s a pretty honest mare who has put together a string of placings.”

Connors had been dodging heavy tracks with Segrill but decided to run at Wyong.

“She’s not a heavy track horse and I scratched her the other day to come here. She needed to go around and has handled it well.”

Winning rider Tom Sherry agreed the heavy conditions had been a concern.

“She’s got a bad record on heavy tracks but couldn’t avoid that today and Mr Connors had her in great order.

“I thought as I turned into the straight, she still had a lot to offer, and she went on with it. There’s still a bit of improvement to come.”

Segrill ($7) beat the Dunn trained favourite Crazy Train ($1.80) who looked to have every chance, with the Perry trained Tupou ($16) putting in an improved performance for third.