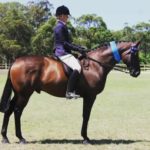 Wyong Race Club was pleased to again sponsor the Off the Track Class for former racehorses at the Morisset and Lake Macquarie Ag Show. This was the third year that the Club has supported this event. Wyong also helps sponsor the NSW State Off The Track finals coming up in Sydney where all regional winners are eligible to compete.

Wyong CEO David Jewell said that Racing NSW and Club are very focussed on horse welfare and helping to sponsor and support the Off The Track Series is a great way to provide new careers for thoroughbreds.

The Morisset competition attracted a great line up and the winner was ‘DP Kingdom’ who formerly raced under the name ‘Purple Pride’. DP Kingdom is owned and exhibited by Jess Castle, who is a local Central Coast lady. The competition judges were Wyong Trainer Johnnie Roberts and Sydney show horse exhibitor Sarah Olsen.

Jess Castle’s D P Kingdom had raced for a couple of years  (without success) as Purple Pride. He was a $175k yearling purchase by Redoute’s Choice that had started out his life on the racetrack with David Hayes.

The Off the Track series is run throughout the state and is restricted to retired registered thoroughbreds providing a valuable opportunity for ex racehorses to have a long career in the show ring when their racing days are over.