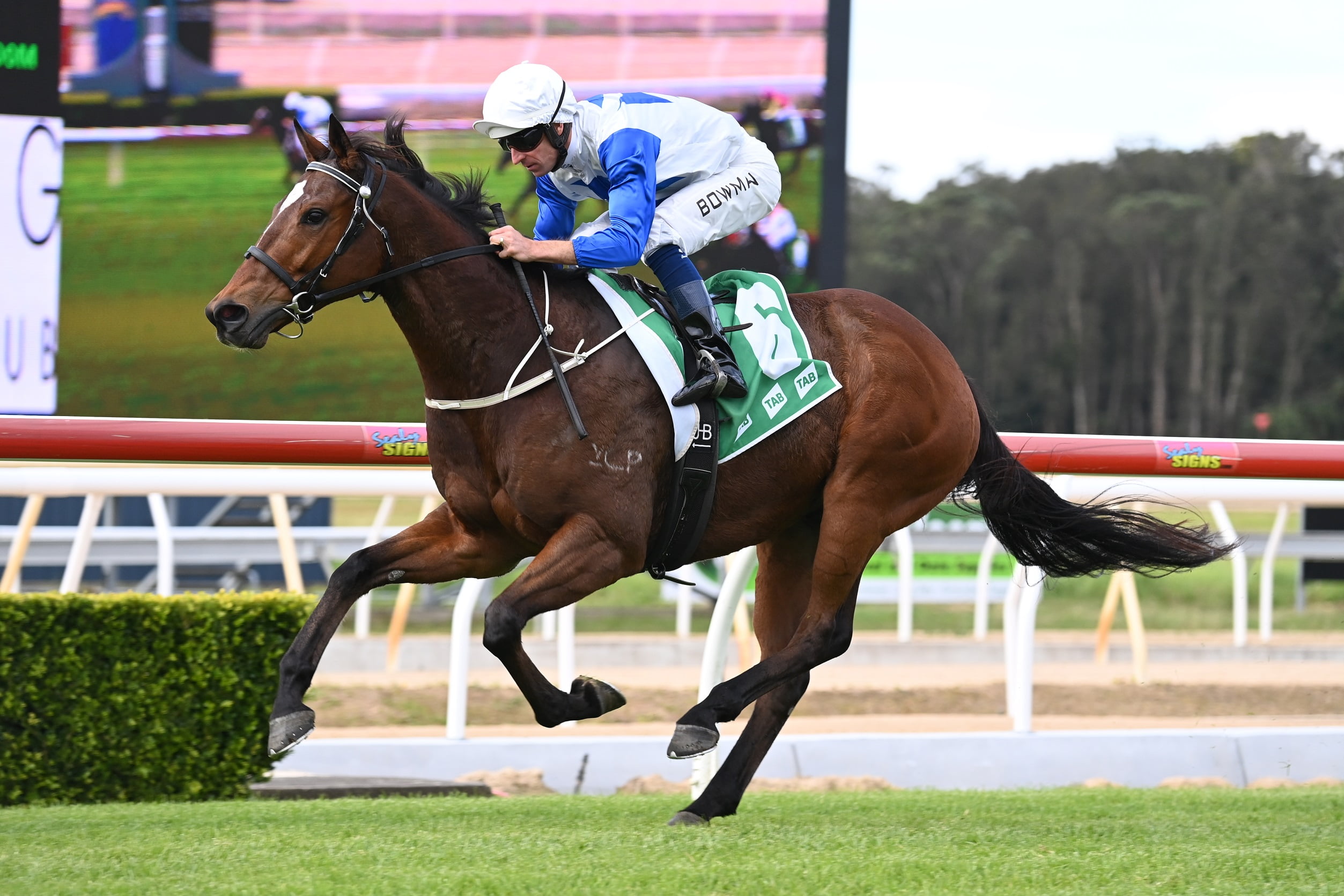 A super start to the day saw the Brett Partelle trained Nomoretawq breakthrough for a well-deserved win.

He was the first of two locals to greet the judge, with Kristen Buchanan’s Ready’s Girl winning later in the day.

Partelle’s Onemorenowmore gelding was having his 19th start in the WYONG RACE CLUB FUNCTION CENTRE 4YO & UP MAIDEN (1350m) and his third for the stable. Long-time friend Peter Eggleston, who recently retired from the training ranks, gave the six-year-old to Partelle and he has run a fourth and third this preparation.

Nomoretawq was sent out $3.60 favourite on the strength of those runs and the win was never in doubt after Hugh Bowman took him to an early lead.

He rated him well in front, drawing away in the final stages to win by almost two lengths over Cataratas ($4.80) trained by Peter Robl, with Jaxon’s Day ($5.50) from the Michael Rinkin stable third.

Partelle, who was ill and unable to attend, had expected a nice home track run from Nomoretawq and paid tribute to Eggleston.

“Peter sent him down in good order. He’s settled in well and enjoys the environment. We have him in the water a lot which is therapeutic. He seems to appreciate that and is responding to it.

“He’s improved since his last run, and I expected him to race well.”

A luckless run for the Damien Lane trained Fielding paved the way for Kris Lee’s debutant Razeta to storm down the outside and claim victory in the 1100m THE ZING ON PROV & CTRY MAIDEN.

Lane’s three-year-old had been placed in all four starts leading into the race and was the $3 favourite despite a wide draw.

When jockey Darryl McLellan was unable to gain cover in the early stages, it was always going to be a hard task for Fielding.

Kerrin McKevoy had the sit on the leaders and was able to run down Fielding in the final stages to win by a long neck.

Razeta ($10.60), a daughter of Deep Field, was coming off three trials and is raced by long time Lees clients Bob and Sue Hannon.

“She was impressive and it’s nice to have another youngster coming through. Hopefully she’ll keep going now,” stable representative Danny Greer said.

Kristen Buchanan’s Oakfield Duke ($4) ran on strongly to finish third, while the The Halo from the Widdup stable wasn’t far off the placegetters.

A race to race double for Kerrin McEvoy after the Godolphin trained favourite Shirshov ($2) proved too strong in the FINGER LICKIN GOOD MAIDEN over 1000m.

The Exosphere gelding was having his seventh career start and coming off a second at Hawkesbury over 1100m on May 19.

Despite racing fiercely in the middle stages, the three-year-old was able to hold off the fast-finishing Nickelback to win by a long neck.

“Sometimes a maiden is the hardest race to win and once they get the monkey of their back they can go on and be good. Hopefully that’s the case here,” he said.

“He sprung the gates today and Kerrin was able to dictate, and the horse fought on strongly.”

The Hawkes trained Nickelback ($3.20) looks close to a win, while Secret Hunter ($19), trained by Michael Freedman, put in a much-improved run finishing third.

A big plunge paid off in the KYLE OLIVER MAIDEN with the John O’Shea trained Denarua blitzing his opposition over the 1600m to win by more than two lengths.

A $140,000 So You Think yearling, Denarau was having his third career start, finishing a close second at Hawkesbury over 1500m on May 19.

He caught the eye of punters who backed him in from $5 to $2.60 in the final stages and they weren’t disappointed.

It was a patient ride by Tommy Berry, who settled off the pace, making his run around the 400m and coming down the outside to win by two lengths.

“It was a good win today,” Berry said. “She’s got a bit of ability and I don’t think she’ll have any trouble making it to mid-week Metropolitan grade.”

Avian Crescent ($13) trained by Jarrod Austin was second, over the $4.60 second favourite Calm Down, from the Quinton stable, who appeared to have every chance.

An upset in the 2000m THE STACK BURGER CLASS 1 & MAIDEN with Goulburn visitor Sorokin outstaying his opposition.

Trained by Jean Dubois, the Star Witness gelding was having just his third career start and could have a bright future as a stayer.

He had been unplaced in his two previous runs at Kembla and Canberra but put on a great staying performance at Wyong to beat the more favoured runners.

Dylan Gibbons took on the short priced favourite Vyner ($1.55) in the straight, the pair going head-to-head in the final stages with Sorokin getting the better on the line.

“It was only his third start, and he was up to 2000. He copped pressure and won his first race, so it’s onwards and upwards for him,” Gibbons said.

The winner had been $41 in early betting but earned some support to start $14.

Speedy Scone mare Tucson Valley was one of the more impressive winners on the day, bringing up her fifth win from just 10 starts in the 1100m COLONEL SANDERS CONDITIONAL BM68.

The daughter of Swiss Ace, trained by Stephen Jones, was able to lead throughout, fending off an early challenge from Trust Me, to fight on for a strong win.

Tucson Valley owned and raced by Gerry Harvey, is by his NZ sire Swiss Ace, out of his classy Flemington 1400m winner Sabino Canyon.

She had been impressive winning in the country beating her opponents at Wellington by more than seven lengths and handled the step up to Provincial grade in style.

Starting at $3.50 favourite, Tuscon Valley beat the Partelle trained Trust Me ($14) by a length, with Jenny Graham’s The Drake ($6) third.

There was drama at the start with Kim Waugh’s second favourite Black Jacamar rearing in the barriers and jumping some 10 lengths behind the other runners.

Kristen Buchanan’s new stable acquisition Ready’s Girl ($19) wasted no time making it to the winner’s circle, taking out the THE RAYMOND FAMILY F&M BM64 over 1350m.

The Better Than Ready mare was given a perfect front-running ride by Rachel King to bring up her fifth career win.

Previously trained by Chris Anderson in Queensland, Ready’s Girl was having her 29th start.

It was a super effort by Buchanan to have her ready first up, with her last start on the Sunshine Coast in early December.

Ready’s Girl was given a Randwick trial leading into the race and was able to win by almost a length over the Kim Waugh trained favourite Buba ($2.10).

Kris Lees and Dylan Gibbons brought up a double in the final race of the day, after Mobstar showed an impressive turn of foot to take out the 1350m WYONG’S NEXT RACE MEETING THURSDAY JUNE 16 BM64.

The Shalaa three-year-old pulled away in the final stages to bring up his second win from start five, giving the stable plenty of confidence going forward.

“It was a really good run at Scone last start, and he has continued to please at home,” stable representative Danny Greer said.

“It was good to see him dominate like that today. Dylan had him in a nice stalking position and when he asked him to improve, he certainly did that.

“Australian Bloodstock have found another nice one. It will be interesting to see how far he goes.”