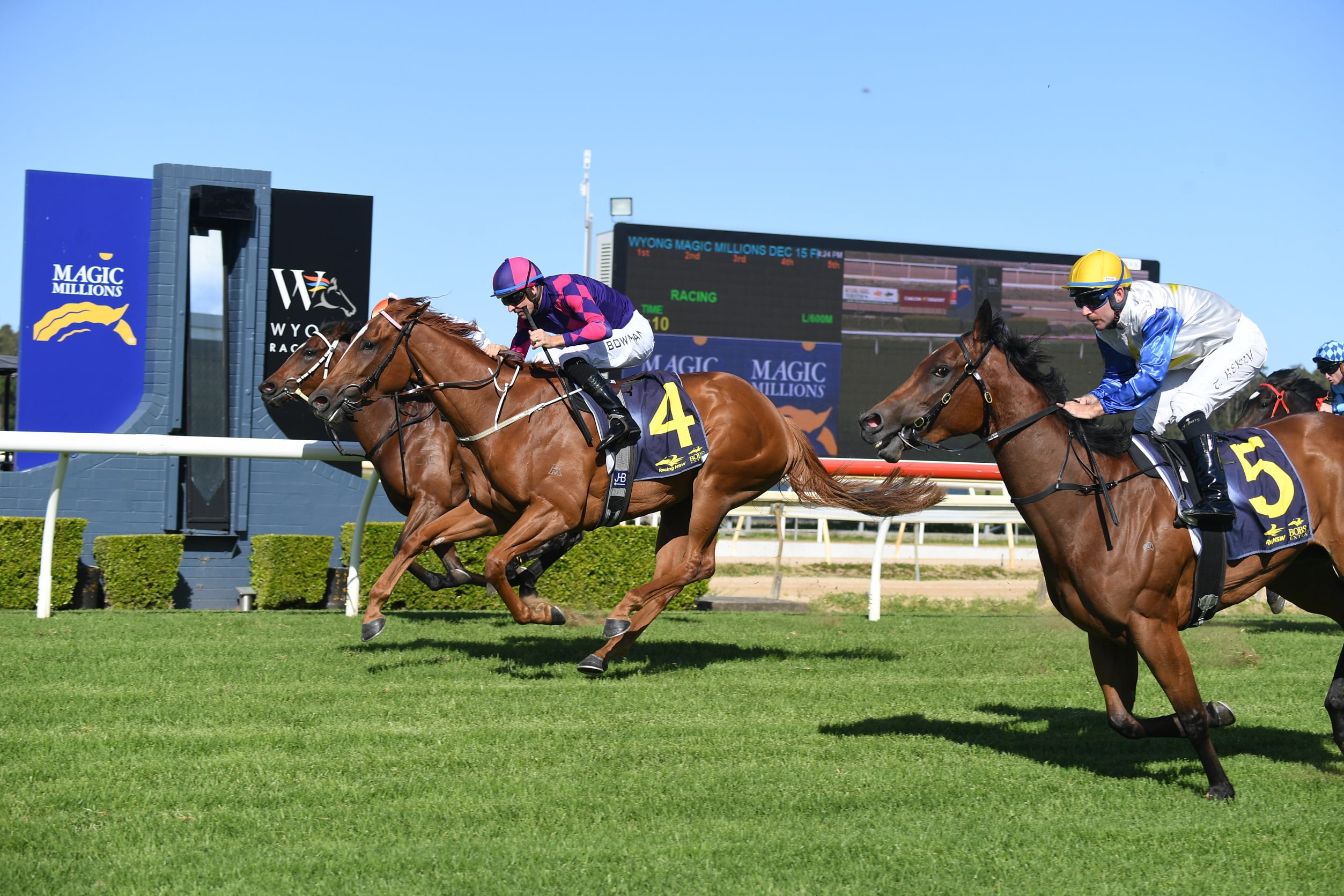 A successful day for punters, doubles for three jockeys along with two horses who won and look destined for better things.

They were the notable highlights from today’s midweek meeting.

Punters definitely came out on top with favorites winning five of the eight races.

Bon Vivant and Ka Bling, both young horses, are worth following.

Whilst their margins weren’t great, their performances indeed were and they look capable of winning better races.

CO-TRAINER Gerald Ryan was concerned beforehand that last-start runaway Newcastle winner Oceanic Flash would be as well suited on the tighter circuit – but need not have worried.

The lightly-raced four-year-old made it two wins in a row, but it was nowhere near as comprehensive as his 1850m victory on the spacious Newcastle track on October 30.

Oceanic Flash ($2.50) nosed out the $1.95 favorite Tea Leaves, and the pair had the finish to themselves, leaving third placegetter Seporto ($12) more than five lengths astern.

“He got the job done,” Ryan said afterwards. “I was concerned because he is a big-striding horse and pricked his ears in the straight when he looked to be putting the second horse away easily. He had a bit of a think about it for sure, but he is a big immature horse who is still learning.”

A gear change on Tea Leaves almost brought about a reversal in form, having been beaten 19 lengths at Kembla Grange at his previous start after doing plenty of work in the run. Blinkers replaced winkers and Tim Clark gave him a perfect run. A two-year-old winner at Newcastle in March, the now three-year-old is ready to return to the winning list.

TIM Clark and the Waterhouse-Bott team just missed in the opener, but they quickly struck back with hotpot For Valour ($1.45).

Clark took bad luck out of the equation by making the running and the Zoustar four-year-old made it two wins on end,  holding off a game Miss Scalini ($5.50), who tried hard to overhaul him.

Mo’s Crown ($14) was third without ever threatening the first pair and can win if he returns to a suitable country event.

For Valour had scored over 1500m on heavy ground at Hawkesbury on November 9, and is taking the next step with every start this campaign.

Stable representative Neil Paine said it was never easy to progress straight from a Maiden to winning a Benchmark race.

“He is the whole package and can certainly get up to city class,” Paine said. “I thought he won with a bit of confidence today and has now won on heavy and good ground.

“We won the race in the first 150m because For Valour has so much gate speed, and then got into a nice rhythm and had more to offer at the finish.”

HUGH Bowman’s class shone through on the $1.90 favorite Bon Vivant, who overcame a wide draw and slow beginning to overhaul Pelennium ($5.50) and Gerardjoseph ($7.50).

“He’s very raw and things didn’t work out in the early stages, and he wasn’t all that comfortable making the home turn,” Bowman said. “But I was confident once he balanced up on straightening, and he didn’t let me down.”

Stable representative Darren Beadman agreed that Bon Vivant was a “big, raw horse” and it was a matter of Bowman keeping him balanced. He also pointed to the run of stablemate Abenaki ($26), who hit the line stylishly to finish fifth and said she could be worth following. Abenaki had done little in four previous runs but looks as though she is going to appreciate a middle distance.

Stewards questioned jockey Glyn Schofield about his riding of Abenaki from the 800m. Schofield agreed with stewards that, in hindsight, the better option would have been to shift outside Gerardjoseph passing the 700m, which would have avoided his mount losing ground at that point.

Jockey Tommy Berry gave her the run of the race, then pulled her around the heels of the two leaders, London Ruler and The Leopard’s Tale (both $41 chances) on the home turn. She stretched out nicely to beat the latter and former horses into the placings.

Berry had a broad smile returning to scale – and with good reason as his wife Sharnee is a part-owner of the filly, a $200,000 Magic Millions purchase.

“She is raced by a ladies’ syndicate and they have been very patient,” Berry said. “Glamour and Glory has always been a bit temperamental, and is now starting to work it out.

“This is probably the tightest track she has raced on, and didn’t get around it all that well, so it adds merit to her win. She will be better on a bigger track.”

SCONE trainer Lou Mary clinched his second Provincial success much to the delight of bookmakers, as favorites had won three of the first four races. His $18 chance Proverbial provided Mitchell Bell with his second winner of the day, and Mary’s second in two days. Bell picked up an unexpected booking when illness forced Christian Reith to forego the mount. Mary was excited to win for new clients and said he had been waiting to put blinkers on Proverbial, who had kept improving this preparation. Proverbial led and just held out the late-finishing $61 roughie Miss Lenorr, who showed rapid improvement on her debut failure at Gosford in June. It looked a two-horse race on paper, but Sacred Field ($1.85) and Bartoselli ($2.70) finished fourth and third respectively. Hugh Bowman reported Bartoselli hung in and never travelled comfortably, whilst Tommy Berry said Sacred Field was obliged to race wide and without cover and hung out during the race.

HUGH Bowman claimed a double when another favorite Sweet Ruby ($2.50) scored – but runner-up My Snow Queen ($3.90) cost herself the race. She made the running but didn’t make the home turn well and veered to the centre of the track. Her waywardness enabled the winner to enjoy a trouble-free run in the straight and she responded gamely to edge out My Snow Queen. Locally-trained Mosht Up ($21) finished third and nearly upset the fancied pair. Winning trainer Kim Waugh described Sweet Ruby as a “nice filly who keeps on improving”. “She looks as though she is looking for 1600m already,” she said. Bowman added: “Sweet Ruby wasn’t comfortable amongst horses, and I’m sure she will be better placed on a bigger track getting over more ground.”

UNDOUBTEDLY one of the wins of the day! No other way to describe $2.10 favorite Ka Bling’s victory. Not the best away, he continued to make ground to race up near the lead, then found plenty in the straight to defeat Mystic Vein ($11) and Buzz ‘N’ Joe ($20). The Capitalist three-year-old was having only his fourth start and has now won twice. Co-trainer Paul Snowden was full of praise for Ka Bling, explaining he was a late scratching at Gosford recently when also favorite, after pulling a shoe and pricking himself after arriving at the track.

“We’ll be looking to get to town with him soon, but he’s still a preparation away,” Snowden said. Winning rider Tommy Berry echoed Snowden’s comments. “I’m really looking forward to his next preparation as he still has plenty of improvement,” he said. “After he began awkwardly, I went forward on him when the speed slackened as it is hard to win today from back in the field.” Apprentice Tyler Schiller, who rode Land Of Valens (ninth at $6), told stewards his mount received heavy contact from another runner passing the 700m and became under pressure from that point and failed to respond to his riding.

No excuses for the beaten brigade here. Winner Toro Toro ($7.50) gave them a start and a beating. The Scone-trained five-year-old, having his fourth start this preparation, began awkwardly and shortly afterwards was bumped by eventual runner-up Flora ($11). He came from last, made the home turn the widest and still rounded up his seven rivals. Stewards, however, cautioned winning rider Matt Palmer to exercise more care as Flora’s rider Josh Parr had to take hold to avoid the heels of the winner when it shifted in under pressure over the closing stages. Favorite Emilette ($3.50), just nudged out of a minor placing, made contact with the inside running rail near the finish when racing tight inside third placegetter Young Heart ($6.50).