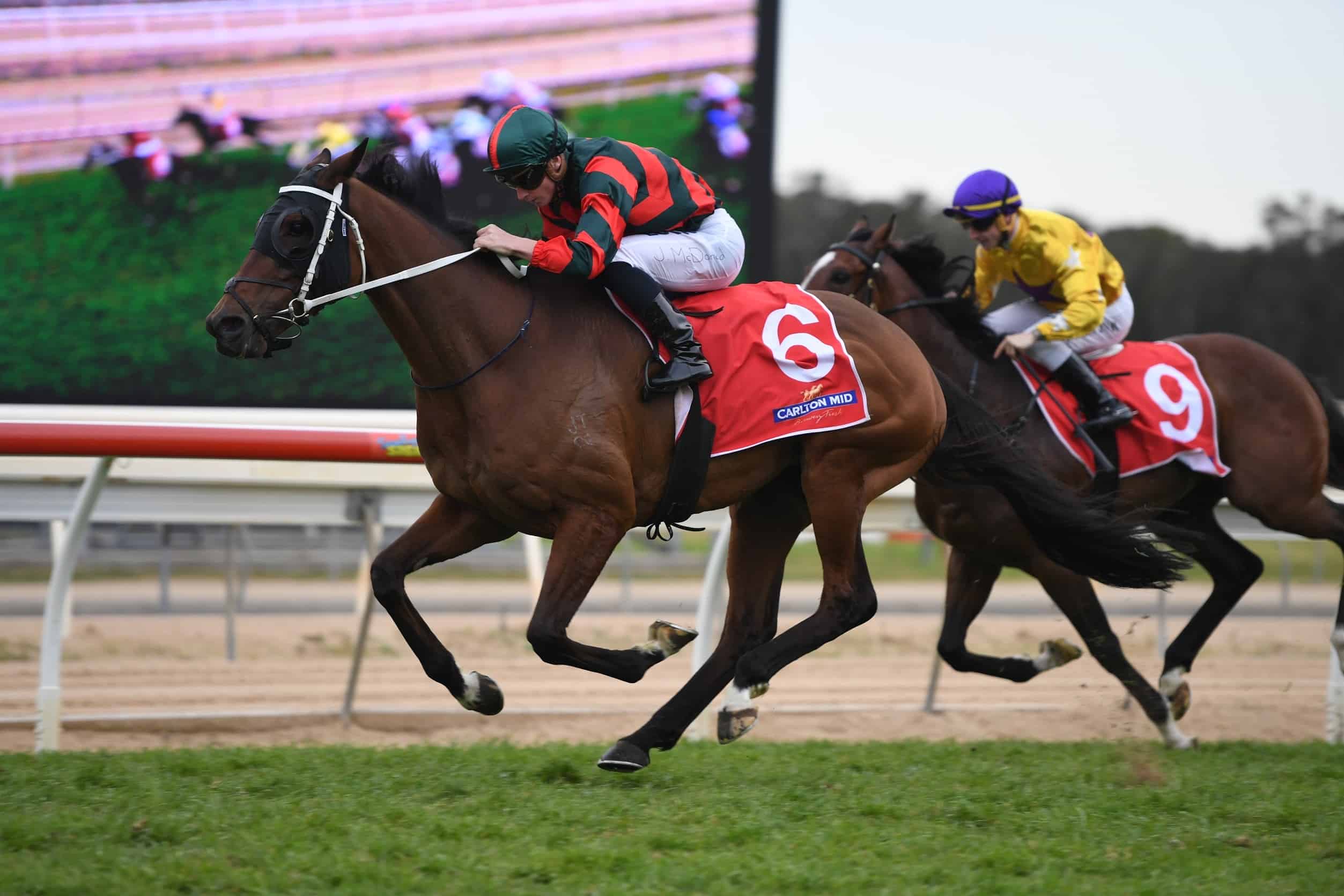 Chris Waller franked his title as the Cups King at Wyong after Wu Gok took out the 2019 $160,000 Carlton Draught Gold Cup, the seventh feature victory for the stable in nine years.

A gamble by Waller to test the Sebring gelding on firm ground paid off, with the six-year-old scoring a convincing length and a half win, courtesy of a great James McDonald ride.

McDonald circled the leaders around the 400m mark and established a good lead into the straight, drawing away to win by almost two lengths.

Jack Bruce, representing the Waller stable, said the track had been the main concern coming into the race, with the majority of Wu Gok’s wins on soft or heavy tracks.

“The track certainly didn’t worry him today. It was another good win,” Bruce said.

“He is in a good vein of form. He’s been up for a while and has been racing consistently, which is all you can ask.”

Bruce said Wu Gok had gotten stronger as he got older.

“He’s a strong stayer and it was good ride by James. He got on his bike early but that’s the way you have to ride Wyong and the experienced jockeys make those decisions and get it right.

“It is a great result for the connections as well, they’ve been patient but are having a good run now.”

Wu Gok, who is raced by Oliver Koolman’s Hermitage Syndicate, was coming off a win in the Group 3 Premier Cup at Rosehill only five days earlier.

The Cup victory is his ninth win from 32 starts. 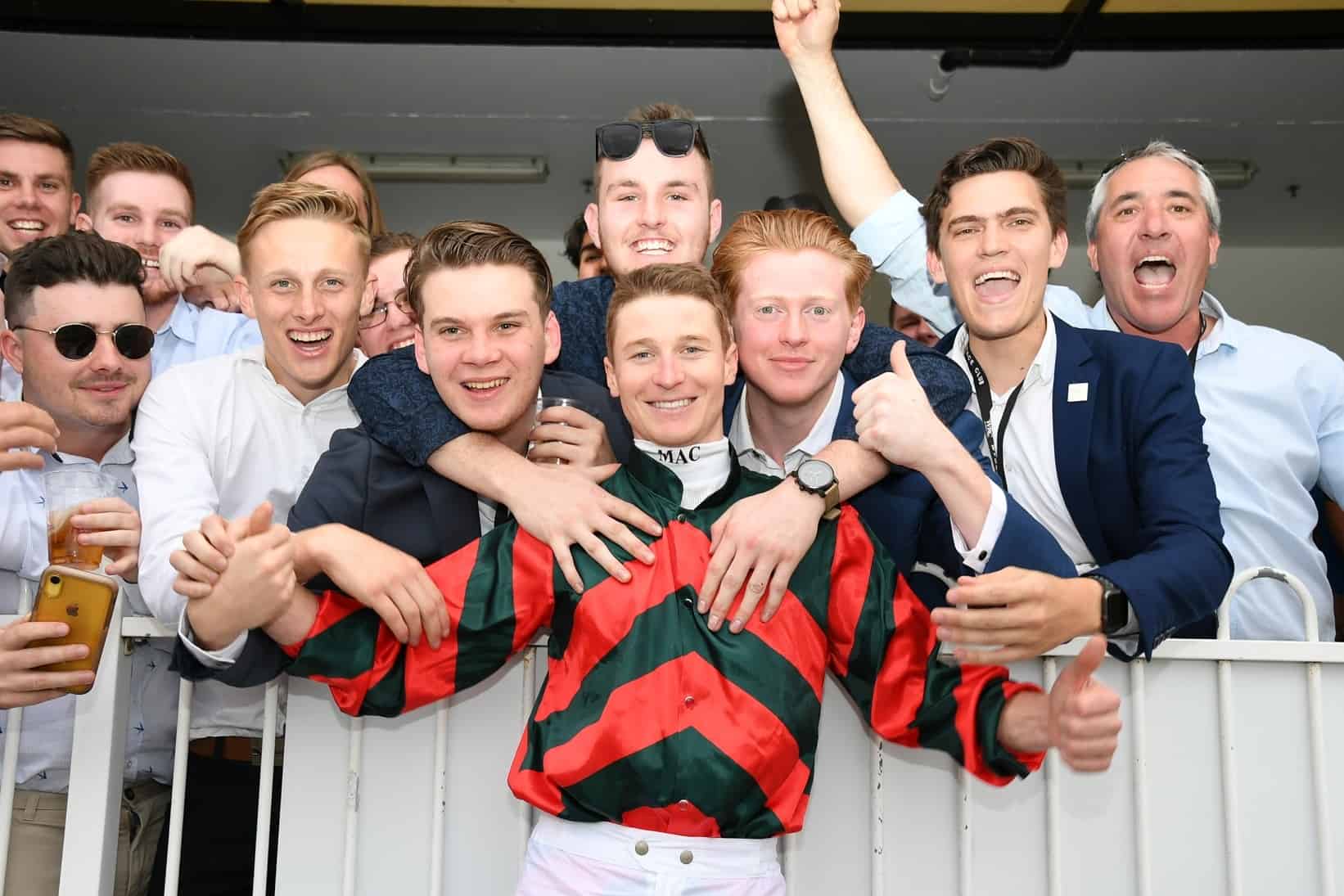 James McDonald, who brought up a double with the win, joked he felt like he was on the Autumn Sun halfway up the straight.

“He’s a great horse and he did a great job today,’ McDonald said.

“I had a really nice position early. He beat me last Saturday and I learnt a fair bit from that. I knew he was a quality stayer.

“It was a great effort by the Waller team to back him up and have him run so well.”

Dolan was called in when Rachel King was suspended and gave the Foxwedge mare the perfect ride to secure a narrow win in the $140,000 race.

“He rode the perfect race,” an excited Pride said.

“She was ridden a treat. It was a great ride by Robbie, he did a great job.

“I came here today really happy with both my mares in this race, but this one has really turned up with her A game.

“She’s a big strong mare and there weren’t too many nicer types in the parade there today. Full credit to David Van Dyke who has looked after this horse the majority of her career and sent us a horse in perfect order.”

It was only the second start for Foxy Housewife since transferring to the Pride stable and she has won both, the first a Benchmark 88 at Rosehill on July 27

“She’s earned some black type with this race which is important and is now the winner of a Listed race and a really strong race here today,” Pride said.

“We gave her a tick over trial a couple of weeks ago and knew she was spot on coming in to today.”

He said he would now likely target the Group 3 Tibbie Stakes at Newcastle on September 20.

Dolan thanked Pride and the owners for the opportunity to ride in the race.

“I don’t claim in the Provincials anymore and it’s great to get these chances,” he said.

“She jumped well, and I just put her in position where I was always around the fancied horses and best jockeys in the race. Thankfully it all just worked out.

“She was strong late, right through the line and is a good horse going forward.”

Foxy Housewife ($26) beat the Godolphin galloper Laburnum ($12) by a neck, with the $3.40 race favourite Connemara trained by Bjorn Baker, third.

James Cummings was impressed with the win of Camp Rifle ($1.90fav) in taking out the 1300m HUNTER PETROLEUM PRODUCTS DA VINCI – 3&4YO BENCHMARK 64.

Jockey Kerrin McEvoy settled the gelding toward the rear of the small field, making up significant ground on the turn.

He hit the lead on straightening but was in a bobbing dual with Rythmic Pulse ($4.80) in the final stages, before scoring a narrow win on the line.

“He went really well. He is still only very young up against some four-year-olds this afternoon but Kerrin really saved something for later. I liked the way he came underneath him,” Cummings said.

“He is by Shooting To Win so there’s every chance he will enjoy getting up to a mile as well.

“I think a bigger track will suit him but it’s just as much about his inexperience at the moment. Kerrin just conserved his energy out the back, while they bunched coming to the turn, he’s got a good finish for as far back as he was.

It was a memorable Cup Day for Damien Lane the locally based trainer scoring a double on the program, both raced by prominent owner Bruce Mackenzie.

The Zoffany gelding, who competed in the 2109 Provincial Championship final, was coming off a fifth at Canterbury on August 21, a race in which Lane said he had no luck.

Jockey Jason Collett led throughout and had his rivals chasing coming into the straight.

He drew away in the final stages to win by two lengths.

“I knew on the back of his trial that we were in for a good preparation,” Lane said.

“He wasn’t beaten far by Redzel and I thought it was an eye-catching run.

“We came here pretty confident today and he got the job done.

“I’ll just take him through his classes and see how far we get this preparation.”

The five-year-old brought up his second win from three starts this preparation, with Lane now leading toward taking the Testa Rossa gelding to a midweek metropolitan race.

“He’s earned his chance to have a start in town and we will go from there,” Lane said.

“I’ve always had an opinion of this horse, but we were trying him over 1600m last preparation, and he was just falling short.

“I think he’s better kept fresh and over the shorter distances and he’s proved that with two wins and a second this preparation.

“A really good ride by Leah helped get the job done today.”

Lane said it was a “great feeling” training a double on his home track on Cup day.

Kilner, who will transfer to Lane in two weeks, said she was grateful for Lane and the connections giving her the ride.

“It was really good to win and hopefully that will be the start of a good association with Damien.”

A super ride by the Nash Rawiller secured a close win for Canasta ($7) in the 1350m PRIORITY BUSINESS LAWYERS 4YO&UP MAIDEN.

The Bjorn Baker trained gelding was coming off a narrow defeat over the 1408m at Bathurst on August 26.

Baker said there were excuse for the four-year-old, having only his third race start.

“He had a foot issue after his first up run, so last start he needed the outing.

“His coat looked good today, it’s the best he’s looked. The blinkers went on and Nash went on.

“It was a great ride, he can really lift them.”

Baker said he would try and step Canasta up over more ground in his next run probably 1600m.

“He’s a four-year-old but he’s European bred so he’s six months behind really. He’s still yet to reach his peak.”

Brenton Avdulla believes there are better races in store for Impudens after his impressive win in the BISHOP COLLINS ACCOUNTANTS MAIDEN over 1200m.

The I Am Invincible colt, a $500,000 yearling purchase, put paid to his opposition in the straight to win by a length and a half.

Avdulla said he was able to get the Kris Lees trained Impudens into a good position early in the race.

“He settled well, and I was always able to keep Hughie on the favourite back on my inside. I made sure he was there until I was ready to go and when I went, he went quick and was good enough to get away with it.

“He’s a nice horse who is still learning his craft and he will go on to better races.”

Lees said it was the perfect ride by Avdulla.

“He’s still got a bit to learn but he’s a progressive horse and I think he’s in for a nice preparation.

“He will probably go to town now to test him in a better grade.”

Impudens ($3.70) beat the $2.20 favourite Katakeri from the Godolphin stable by a length and a half, with the Gary Moore trained Lucky Imperator ($10) a close third.

The step up to 1600m proved the key to the Kylie Gavenlock trained Temprado who won the AUSTRALIAN BLOODSTOCK BENCHMARK 64 in a close finish.

Sporting the Kolivos colours, made famous by his sire Pierro, the five-year-old was settled mid-field by Hugh Bowman, who made his move just before straightening and was able to hold out He’s A Given ($7.50) on the line to win by a half neck.

Owners Greg Kolivos, representing Gavenlock, said the gelding had been looking for further.

“He needed the extra distance today. Last start the Newcastle track was like concrete, but this track today has a little give in it which suited him perfectly,” Kolivos said.

Bowman said he thought the Temprado raced well, dug in when he needed to and would be improve when he stepped up further.

Bid ‘N’ Bare, the $2.50 race favourite trained by Kristen Buchanan was third, a length behind the winner.