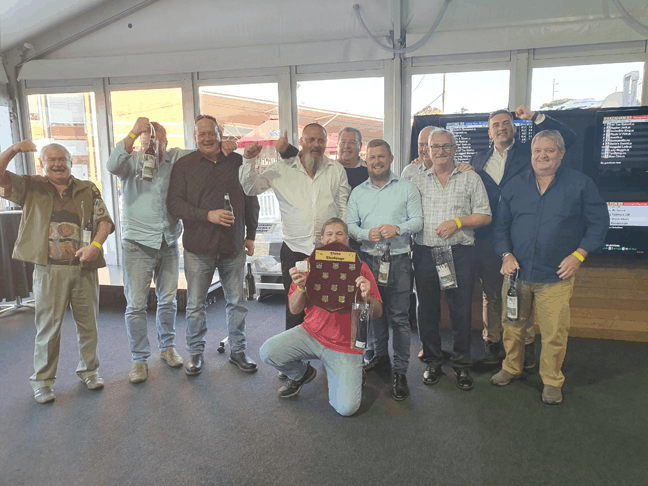 Congratulations to Central Coast Clubs Challenge winners Wyong Golf Club II taking away the 2019 shield and a kitty of $1,059.50.

Tommy Berry put on a riding display taking out half the program at Wyong’s Central Coast Clubs Challenge race day.

The popular jockey rode three in a row half way through the day, capping it off with a winner in the last.

“It’s been a while since I’ve ridden four,” Berry said. “I have had a few three wins here and there, but it’s certainly been a good day out.

“It’s a credit to the trainers who brought their horses here in such good order and nice to have won on a couple of up and coming two-year-olds.”

Berry is having a great season since returning from a stint in Hong Kong, sitting third on the Metropolitan riders’ premiership and now running fourth in the Provincial title with 32 wins.

The first leg of his Wyong treble came on the Hawkes trained two-year-old Exceedance ($6), who looks to have a bright future after scoring an impressive debut win over 1100m.

Courtesy of a patient ride by Berry, the Exceed And Excel colt, showed a great turn of foot to storm down the outside and record a three quarter length win in the TOUKLEY GOLF CLUB 2YO MAIDEN.

Berry came from the rear of the field, circling the others on the turn and making up eight lengths in the straight to run down the leaders.

“He’s got above average ability and we’ve always had a nice opinion of him,” he said. “If it had of been a bigger surface, he probably would of won by a lot more. Wyong is a tight track and you have to ride Wyong and be patient and Tommy rode the perfect race and got the job done.

“We knew Wyong wasn’t his track, but they don’t run these sort of two-year-old races in Sydney.

“He’s had two nice trials, his first trial was really good and his second was an educational trial because he’s been a bit tardy away. I said to Tommy to have him where he’s comfortable and he got back. I wasn’t worried on the corner because I knew Tommy was going to track up. When the leader kicked it gave him something to chase and he knuckled down. It was a really good effort.”

Exceedance, a $180,000 yearling, is raced by a syndicate including Vinery stud and Werrett Bloodstock.

“Vinery have been very good clients of ours and there is a lot of good people in this horse. They have been patient and they are starting to get the rewards.

“We might go to town next or he might even go to the paddock. He’s a baby and he’s still learning.”

Tommy Berry brought up a race to race double on another impressive debutant, with North ($2.70) scoring a tough win in the WYONG ROOS FOUNDATION MAIDEN over 1100m.

Trained by the Snowdens, the $300,000 Deep Field colt, led for most of the race and was able to hold out late challenges from Money Travels and Commander Bell, to win by a length.

Stable representative Colum McCullagh, admitted the two-year-old had been a “sitting duck.”

“He did well to sustain today, he was a sitting duck out there,” he said. “He pinged the lids and was there for the taking in the straight, but it was nice to see him put his best foot forward.

“He’s shown good natural speed in his trials and at home and we were reasonably confident he could get the job done today.”

Berry said North had given him a nice feel during the race.

“The stable, Colum and the team gave me a nice push for him before the race and said he’s a lovely colt, you’ve just got to keep his mind on the job.

“He wasn’t entitled to win because I got attacked for most of the race but for him to still come out the other end and beat them convincingly was a good effort.

“He’s a bit like his dad Deep Field, he’s fast and he’s got a high cruising speed.”

Buchanan described it as the “perfect” ride.

“He got him moving at the right time, he’s a big horse, a momentum horse, he rode him absolutely perfectly,” she said.

“It was a gutsy win. He’s a big striding horse and I said to Tommy he just needs galloping room to be comfortable.

“He just hung in and was very tough in the end.”

Buchanan said the eight-year-old was a brother to her Group winning mare Two Blue.

“The whole family are really tough. Ken and Leanne Dennis have done an amazing job breeding their mare.

“They couldn’t part with this one. They have younger horses coming through, but I had to keep him in the stable.

“They are all honest type horses who try their hearts out. He’s had any number of issues and has spent a lot of time in the paddock but I’m glad we stuck it out.”

Bluesbro has had 13 starts for two wins and seven minor placings.

Berry again showed patience coming from toward the rear of the field to swamp his opposition in the final stages, scoring a half-length win.

It was the second career win from nine starts for the three-year-old Poet’s Voice filly, who was coming off a sixth at Warwick Farm on May 1.

Darren Beadman, representing the stable, said it was a “good, tough win.”

“He had to make up a bit of ground in the straight and was able to reign them in,” he said.

“He has won in town previously so I’d say we will look at giving him another shot at a metropolitan race.”

Beadman was also complimentary of Berry.

“Tommy is a good rider and it’s great to see him getting the four winners today.”

Jason Coyle hasn’t ruled out a trip to the Brisbane winter carnival with River Bird ($1.28fav) after the filly broke through for a well-deserved maiden win.

The Epaulette three-year-old raced in listed company in December before spelling and was impressive with two trial wins leading into the Wyong race.

She always looked comfortable after being settled midfield by Kathy O’Hara in the 1000m KOOINDAH WATERS – RACE STAY & PLAY MAIDEN and finished strongly to record a two-length victory.

Coyle said he will see how the filly pulls up before deciding on her next run.

“I always thought we could head her towards Brisbane and her owner Joe Rapisarda is from there,” he said. “But there are some lower benchmark races in Sydney during that time as well so I will have to weigh it all up.

“We’ve been waiting for her to win for a while, but we’ve tested her at higher grades, and she hasn’t been disgraced. She’s a nice filly and it’s good to record the maiden win. Hopefully she can go on with it now.

“She did everything right today. The 1000m suits and she travelled really sweet behind them and was able to let down strongly. They ran a good time so hopefully that will put us in good stead for where we go from here.”

Robbie Dolan was full of praise for Prince Camelot who proved to be the dominant stayer in the 2100m CENTRAL COAST LEAGUES CLUB MAIDEN.

It looked to be a race in two with the favourite Road To Blue Skye ($1.95) in a head-bobbing battle down the straight with The Boomerang ($4.40).

The John Sargent trained Prince Camelot ($4.20) gained momentum in the final stages and was able to run down the leaders and score a narrow win.

“He’s only small but he’s got a big heart,” Dolan said. “He attacked the line strongly today and I can see him getting further. He really wants to win.

“John placed him well here and this will really get his confidence up.”

The Camelot three-year-old was coming off a third at Wyong over the 2100m at his last start.

“Sarge likes him and that is why he has persisted with him,” stable representative Amber Edmeads said.

“It was really good to see him get his head in front today, it will give him a lot of confidence. A lot of patience and time has gone into this horse, so it is good to see him win.

“He was bred to run over a distance. We were worried earlier in the shorter runs but as soon as we stepped him up, he has shown us a lot more.

“We wanted a nice good run into it and that’s what happened, and he finished off great.”

Edmeads was also full of praise for the ride.
“Robbie is a really good rider and we put him on the majority of our horses,” she said.

An upset in the CLUB TOUKLEY RSL 3YO MAIDEN over 1350m with the Scott Singleton trained Niccirose ($31) leaving the odds-on favourite in his wake to score a dominant win.

Christian Reith settled the Nicconi three-year-old just outside the leader and favourite Embracer ($1.09) from the Waterhouse Bott stable.

The pair shared a soft lead and with everything going his way, it looked well set up for Embracer to win.

Nicconi hit the lead on straightening and pulled away leaving the favourite in his wake, to record a four and a half-length victory.

Singleton said he was a “bit surprised” with the win.

“I wouldn’t say I was expecting it, but we gave him a freshen up since his last run at Kembla and that’s done the job,” he said.

“He jarred up a bit at Kembla and this track has got a bit more give in it which suited him.

“He jumped well and was keen to race. In some of his other races he’s had to come from behind and just hasn’t been able to make up the ground.

“He has always had a bit of ability and raced really well today.”

Reith said Nicconi had given him a “good feel.”

“It’s the first time I’ve ridden him in a race, and he stretched right out. It was a promising win and good to get the maiden out of the way.

“Hopefully he’s got some more wins in him.”

Smart Decision ($9), trained by John O’Shea, was a further length behind in third.

A good training effort by Matthew Vella after I’m A Legend ($3.10) brought up his second successive win to take out THE DOYLO LIFESTYLE GROUP CLASS 1.

The Nicconi gelding broke through for his maiden win at Goulburn on April 28 at his tenth start and backed it up with a tough win at Wyong over the 12oom.

Vella was full of praise for the four-year-old and the ride by Sam Clipperton.

“He’s quite handy this horse. He’s got great form as you can see with placings. We changed a bit up this prep and it’s paying dividends. We haven’t galloped him once at home and it’s kept his vibe good,” he said.

Vella, who has four horses in work at Hawkesbury and is pre-training 70, said the difference to his training routine had certainly helped.

“We take him through the bush a little bit, a lot of swimming, just keeping him happy.

“I was never worried about his ability. I think the blinkers have helped as well, but it’s just about not overcooking him at home because he’s quite a nervous horse as it is.

“Sam rode him so well. He knows him from last start and is a top-class rider.”

Clipperton said Vella and the owners had been very patient with I’m A Legend and were now reaping the rewards.

“It’s not easy to go from a maiden win to a class one but he did it well today,” he said.

Cinquedea, the $2.35 favourite from the Richard and Michael Freedman stable was second, with the Godolphin trained Gorgons ($7.50), third.